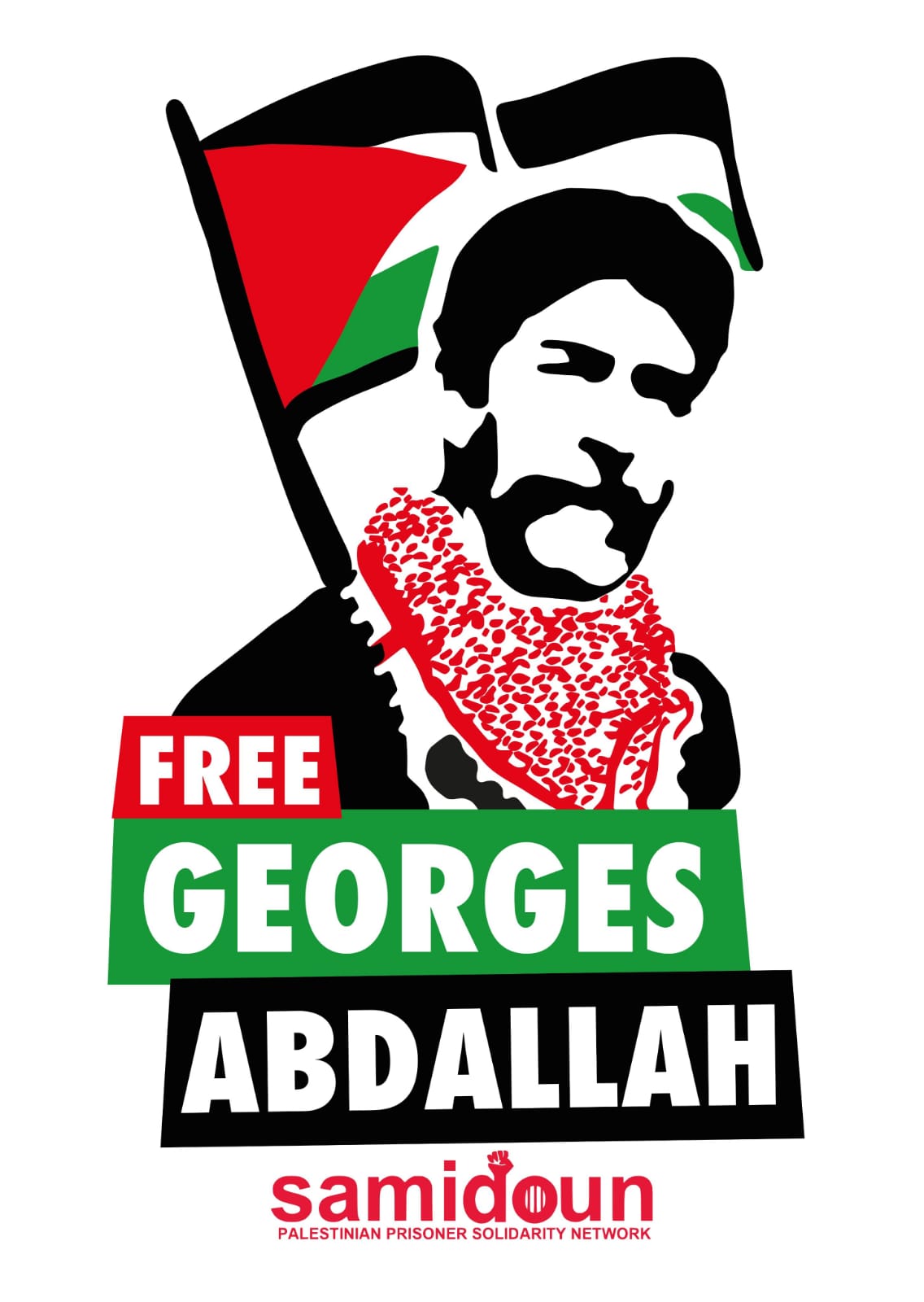 It’s Georges Abdallah’s 70th birthday. This Lebanese Arab communist struggler for Palestine is marking this birthday in Lannemezan Prison, after being jailed by France for over 36 years. Join us today to take action online to demand his immediate liberation.

Sign this card to greet his birthday and demand the immediate release of this Lebanese Arab struggler for Palestine jailed in France for over 36 years.

Throughout his time in prison, Georges Abdallah has remained on the forefront of struggle, even participating in collective hunger strikes with Palestinian prisoners. His return to Lebanon has been repeatedly blocked by French officials, acting in concert with the United States and Israel.

The signed card will be sent to French authorities to demand Georges’ release as well as to Georges himself in Lannemezan prison. Sign below or visit the action link: https://actionnetwork.org/forms/wish-georges-abdallah-a-happy-birthday-of-freedom

To write to Georges or send him a card of your own, write to:

Who Is Georges Ibrahim Abdallah?

A Lebanese Arab struggler for Palestine, he has been imprisoned in French prisons since 1984, convicted on charges of participation in armed actions by the Lebanese Armed Revolutionary Faction, working to fight off colonialist and Zionist invasions in Lebanon.

From his youth, Georges Abdallah was an activist, working first with the Syrian Social Nationalist party and then with the Popular Front for the Liberation of Palestine (PFLP). With the PFLP, he resisted and was injured by Israeli forces invading Lebanon in 1978. A committed Communist and internationalist, he views the Arab struggle for liberation from Zionism and imperialism as part and parcel of the international workers’ struggle for liberation from capitalism.

The Lebanese Armed Revolutionary Faction (LARF) was formed to fight off and resist U.S., Israeli and other imperialist attacks on Lebanon. Georges Abdallah was accused of participating in attacks on U.S. and Israeli military officials in France.

He has been eligible for release since 1999 yet continues to be denied parole, despite having parole requests approved several times by French judges. The Lebanese government has officially asked for his release, and he is asking to be deported to Lebanon. Yet the French state has intervened at the highest levels, alongside the U.S and Israeli regimes, to deny Georges Abdallah’s parole requests.

In fact, in 1985, the French government agreed to a prisoner exchange – to release Abdallah in exchange for a captured French diplomat. Instead, the diplomat was released – and Abdallah remained in prison. His own original lawyer was in fact a spy working for the French state and reporting on him to the highest levels of French intelligence; all of which was used against him in court.

People throughout France and around the world have campaigned for his freedom for decades. His brothers and loved ones in Lebanon lead the International Campaign to Free Georges Ibrahim Abdallah. He is considered to be part of the Palestinian prisoners’ movement by Palestinian prisoners in Israeli jails.

His case represents also the coherence of U.S., Israeli and European colonialist interests in the imprisonment of Palestinian and Arab strugglers for liberation and the attack on the Palestinian people.