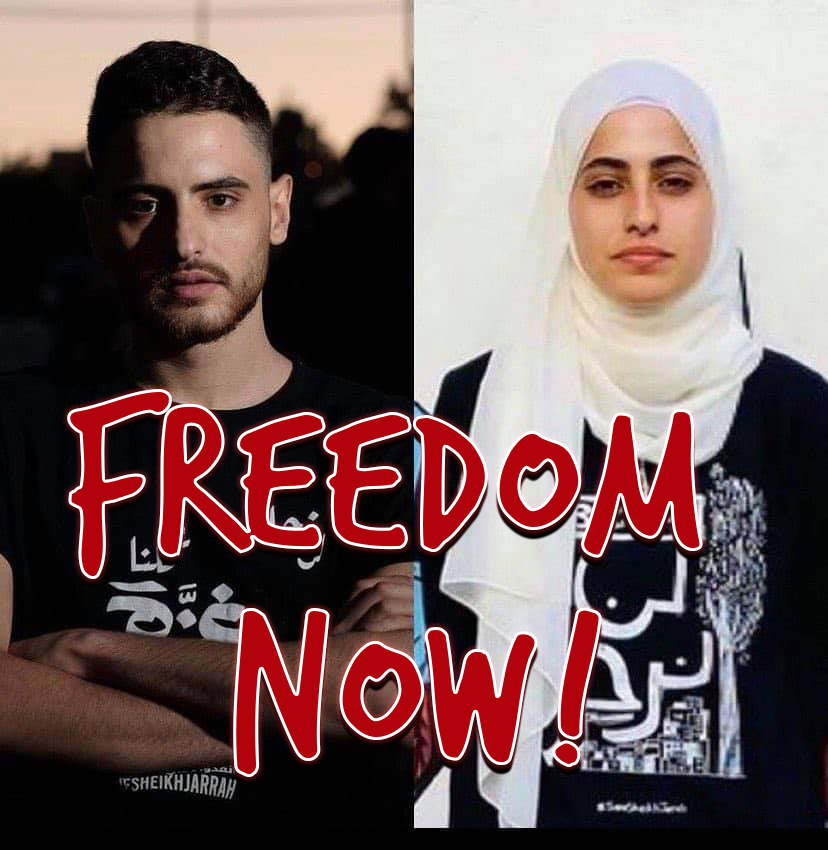 UPDATE 2: Mohammed al-Kurd has been released! Now is the time to keep up the struggle until all Palestinian prisoners – and all of Palestine – is free.

On Sunday morning, 6 June, Palestinian activists from Sheikh Jarrah, twin brother and sister Muna and Mohammed al-Kurd, 23, were seized by Israeli occupation forces. Both Muna and Mohammed have appeared extensively in Arab and international media, including CNN, MSNBC and Democracy Now, highlighting the Israeli state and settlers’ attempts to steal their family home in Sheikh Jarrah, occupied Jerusalem. Their massive reach on social media has allowed them to tell the story of Palestinian Jerusalemites to millions, with Muna having over 1 million Instagram followers and Mohammed with hundreds of thousands of twitter followers. Take action now to demand Mohammed el-Kurd’s immediate release!

In addition to the theft of their home, the family has faced repeated repression and attacks by Israeli occupation forces. Just the day before, Mohammed al-Kurd said that Israeli settlers threw stones and gas at his home as Israeli occupation police looked on. Both Kurd siblings witnessed the assaults and detention of Al Jazeera correspondent Givara Budeiri and photographer Nabil Mazzawi as they covered protests in Sheikh Jarrah marking the Naksa and demanding an end to settler colonialism on Palestinian land.

Since 2009, half of the al-Kurd home has been occupied by illegal Israeli settlers, half of both Mohammed and Muna’s lives. Muna’s video of Yaakov Fauci, the infamous Kahanist Zionist settler who declared, “If I don’t steal it, someone else gonna steal it,” spread around the world, highlighting the massive injustice taking place in Sheikh Jarrah and throughout occupied Palestine.

The first moments of the arrest of the Palestinian icon, Mona Al-Kurd, by the Israeli forces, after storming their house in Sheikh Jarrah this morning. pic.twitter.com/lxQPfX6plS

Israeli occupation forces invaded the Al-Kurd family home on Sunday, 6 June. Mohammed and Muna’s father, Nabil al-Kurd, said that he awoke to occupation forces inside his bedroom and armed forces taking his daughter away. They also demanded that Mohammed al-Kurd, who was not home, turn himself in for interrogation or they would “come back every hour” to harass the family. In an interview following his children’s abduction by occupation forces, Nabil al-Kurd emphasized that these arrests were an attempt to silence their voices. “The Palestinian voices are more frightening than their tanks!” he affirmed.

Mohammed al-Kurd later came to the Israeli occupation police station in Jerusalem, and both al-Kurd siblings are currently being detained.

In 1948, the al-Kurd family – like thousands of other Palestinians – were forced from their homes and lands by militias seeking to create an exclusively Jewish state, Israel, in occupied Palestine. Over 750,000 Palestinians were made refugees during the Nakba, and millions of Palestinian refugees have been denied their fundamental right to return home for the past 73 years. The al-Kurd family was moved into the Sheikh Jarrah district of East Jerusalem under an agreement between Jordan and the United Nations to house 28 families. They were housed in Sheikh Jarrah, with the provision that the property titles would be transferred to those families after 3 years.

In 1967 Israel illegally annexed East Jerusalem, and Sheikh Jarrah has remained under occupation since then. Working hand in hand with the state and military, Israeli illegal settler organizations have attempted to uproot these Palestinian families – already once displaced by Israeli violence and colonization – from the homes where they have lived for decades, and who are entitled to their land as property owners under the agreement between Jordan and the United Nations.

Far-right racist settler groups have claimed ownership of Sheikh Jarrah and have been taking over Palestinian homes, evicting their rightful owners with the backing of Israeli courts and the Zionist state as a whole. Adding insult to injury, displaced Palestinian families are then ordered to pay money to the courts to cover the legal costs of the settler organizations. Today, dozens of families are threatened with forcible expulsion from their homes.

The struggle to save Sheikh Jarrah and the ongoing Nakba perpetrated against the Palestinian people throughout occupied Palestine and in exile and diaspora by the Zionist state sparked the recent uprising throughout Palestine, a strong response by the Palestinian resistance in Gaza and encouraged millions of people to take the streets around the world.

Samidoun Palestinian Prisoner Solidarity Network joins people of conscience around the world in demanding the immediate release of Muna and Mohammed al-Kurd – and all Palestinian political prisoners and detainees. They are being detained for defending their homes and raising their voices and stories to the world – it is time to act to free them, save Sheikh Jarrah and stand with the Palestinian liberation movement to defend Palestine, from the river to the sea.

Hundreds of thousands – millions of people – around the world have marched and protested with Palestine, its people and its liberation over the past week. Your protest and organizing is also key to supporting this strike!  Take to the streets and join the actions on our full list of events, which is constantly being updated as new actions are announced! Organize your own if there is none in your area, and send us your events at samidoun@samidoun.net.

The international, Arab and Palestinian campaign to boycott Israel can play an important role at this critical time. Local boycott groups can protest and label Israeli produce and groceries. During Ramadan, Israeli dates from stolen Palestinian land are marketed around the world while Israel attempts to force Palestinians from Jerusalem, demolish homes, and imprisons thousands more. By participating in the boycott of Israel, you can directly help to throw a wrench in the economy of settler colonialism. Download our Boycott Flyer to distribute at supermarkets, stores and other venues in your community! Block the Boat – join the campaigns to stop Israeli apartheid shipping internationally, which just won a major victory in Oakland, turning back an Israeli ZIM ship from unloading at the port.