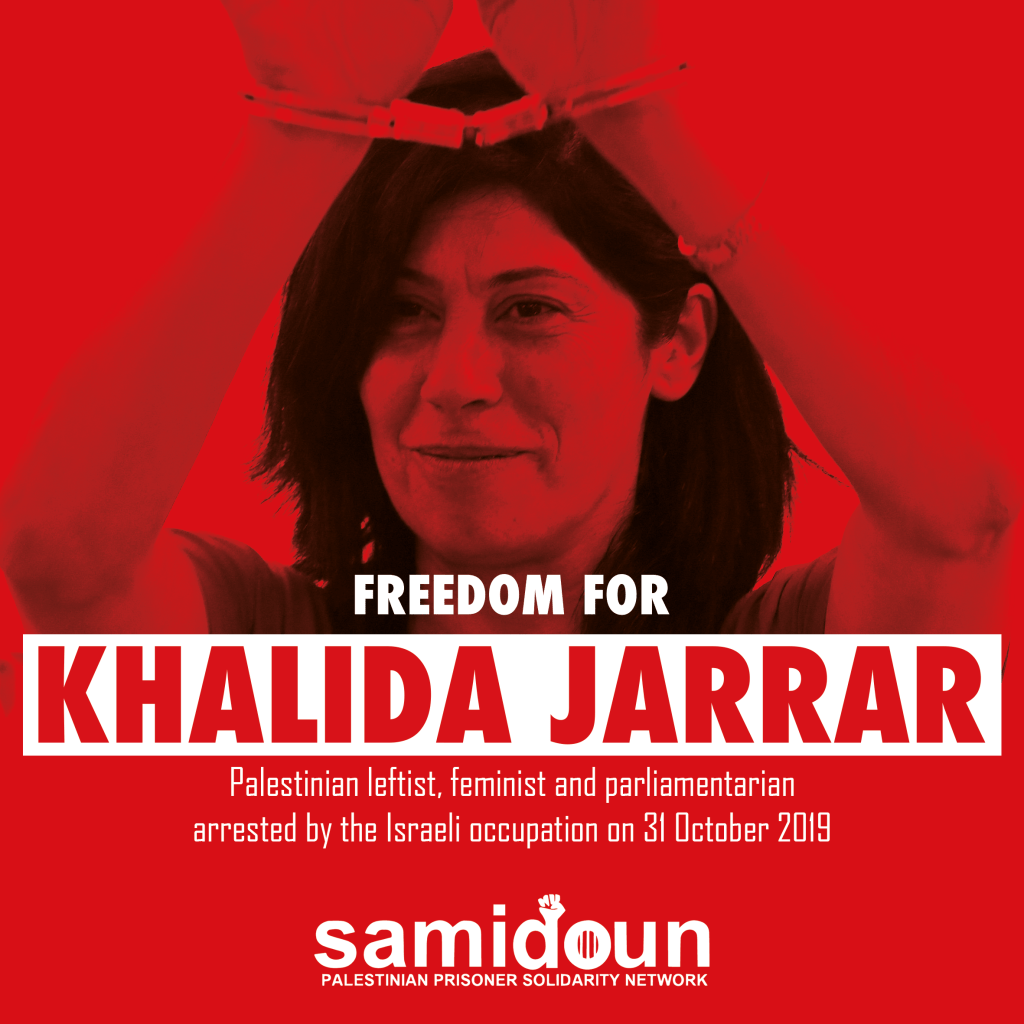 Palestinian lawyers reported on Monday, 12 July that the Israeli occupation rejected their legal appeal seeking the early release of imprisoned Palestinian feminist and national leader, Khalida Jarrar, to participate in the funeral of her daughter, Suha Jarrar, who passed away on Sunday in Ramallah.

The Israeli occupation wants to deny even this basic human need to Khalida Jarrar, to see her daughter one last time. She is imprisoned on political charges and has only two months remaining in her sentence, imposed by an illegitimate Israeli military court for her public activities and advocacy for Palestinian liberation.

This latest attack on Jarrar and her family came as thousands of people around the world have signed a petition, demanded their governments take action and expressed their outrage at the ongoing repression directed at Khalida Jarrar and her family, even at a moment of great tragedy. Suha Jarrar, 30, was a committed Palestinian human rights defender who worked with Al-Haq and spoke around the world, defending and upholding Palestinian rights and liberation.

In occupied Palestine ’48 and the occupied West Bank of Palestine, protesters gathered outside Damon prison – where Khalida Jarrar is detained – and Ofer prison, demanding her freedom. They were attacked by Israeli occupation forces, who fired tear gas and sound bombs against the Palestinians calling for a mother to be allowed to attend her daughter’s funeral.

In Gaza City, the Popular Front for the Liberation of Palestine organized a protest outside the International Committee of the Red Cross, demanding action from the ICRC to secure Jarrar’s release. Representatives of all Palestinian factions and prisoner support organizations joined the protest, and Palestinian child Nadine Abdel Latif spoke in English, demanding Khalida be free to say farewell to her beloved daughter.

Suha Jarrar is scheduled to be buried Tuesday afternoon, 13 July, with a funeral procession from the family home in Ramallah to the Al-Ain Mosque in Al-Bireh to the Ramallah cemetery.

Palestinian prisoners are routinely denied early release or even furlough to attend the funerals of their family members and loved ones, as well as being denied family visits with their living relatives behind bars. On the contrary, Israeli Jewish criminal prisoners (rather than “security prisoners,” the term used by the Israeli occupation to denote Palestinian political prisoners) are routinely given furloughs and early release to attend funerals or visit their families.

We urge all supporters of Palestine to amplify and intensify the international call to demand freedom for Khalida Jarrar.

We urge all supporters of Palestine sign the petition to demand Khalida Jarrar’s immediate release and seek worldwide support: https://bit.ly/FreeKhalidaJarrar

Update your Facebook profile with a frame demanding Khalida’s release.

Are you in Canada? Write to the Canadian government to demand Khalida’s immediate release.

This petition addresses the United Nations and calls on human rights organizations like Amnesty International to take a stand for Khalida’s immediate freedom.

Post with the #FreeKhalidaJarrar hashtag and join Palestinians and supporters of justice around the world!

Hundreds of thousands – millions of people – around the world have marched and protested with Palestine, its people and its liberation over the past week. Your protest and organizing is also key to highlighting the campaign to free Khalida!  Take to the streets and join the actions on our full list of events, which is constantly being updated as new actions are announced! Organize your own if there is none in your area, and send us your events at samidoun@samidoun.net.

Solidarity with Ahmad Sa’adat, Palestinian resistance leader, in the heart of downtown Toulouse