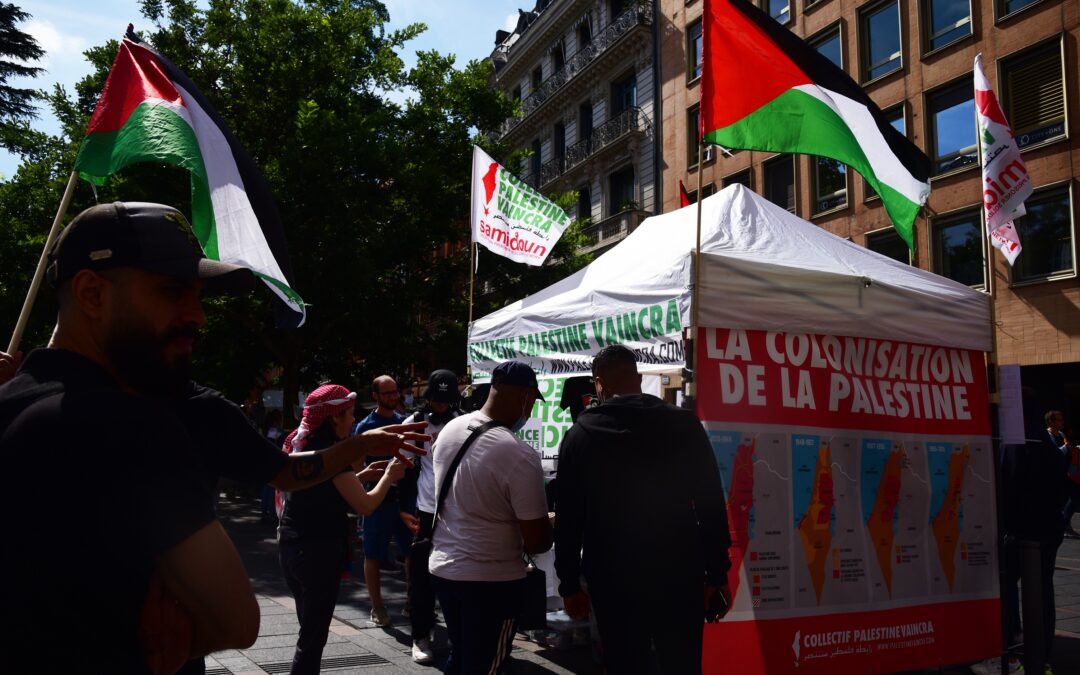 On Saturday, 3 July, the Collectif Palestine Vaincra, a member organization of the Samidoun Network, organized a Palestine Stand at the Capitole metro station in Toulouse, France. The initiative focused on celebrating the legitimacy and necessity of Palestinian resistance in confonting colonization, racism, and apartheid violence, especially following the deadly Israeli military aggression against Palestinians in the Gaza Strip in May 2021.

Under the summer sun, the Collectif organized an information stand in the heart of downtown Toulouse, with large banners stationed in the area reading “From the river to the sea, Palestine will win,” and “From Gaza to Jerusalem: Resistance!” The stand also included an exhibition on the campaign to boycott Israel and complicit corporations and the struggle of Palestinian prisoners in Israeli occupation prisons. Participants distributed almost 1,000 leaflets on the history and nature of Zionist colonialism in Palestine and the importance of supporting Palestinian resistance. 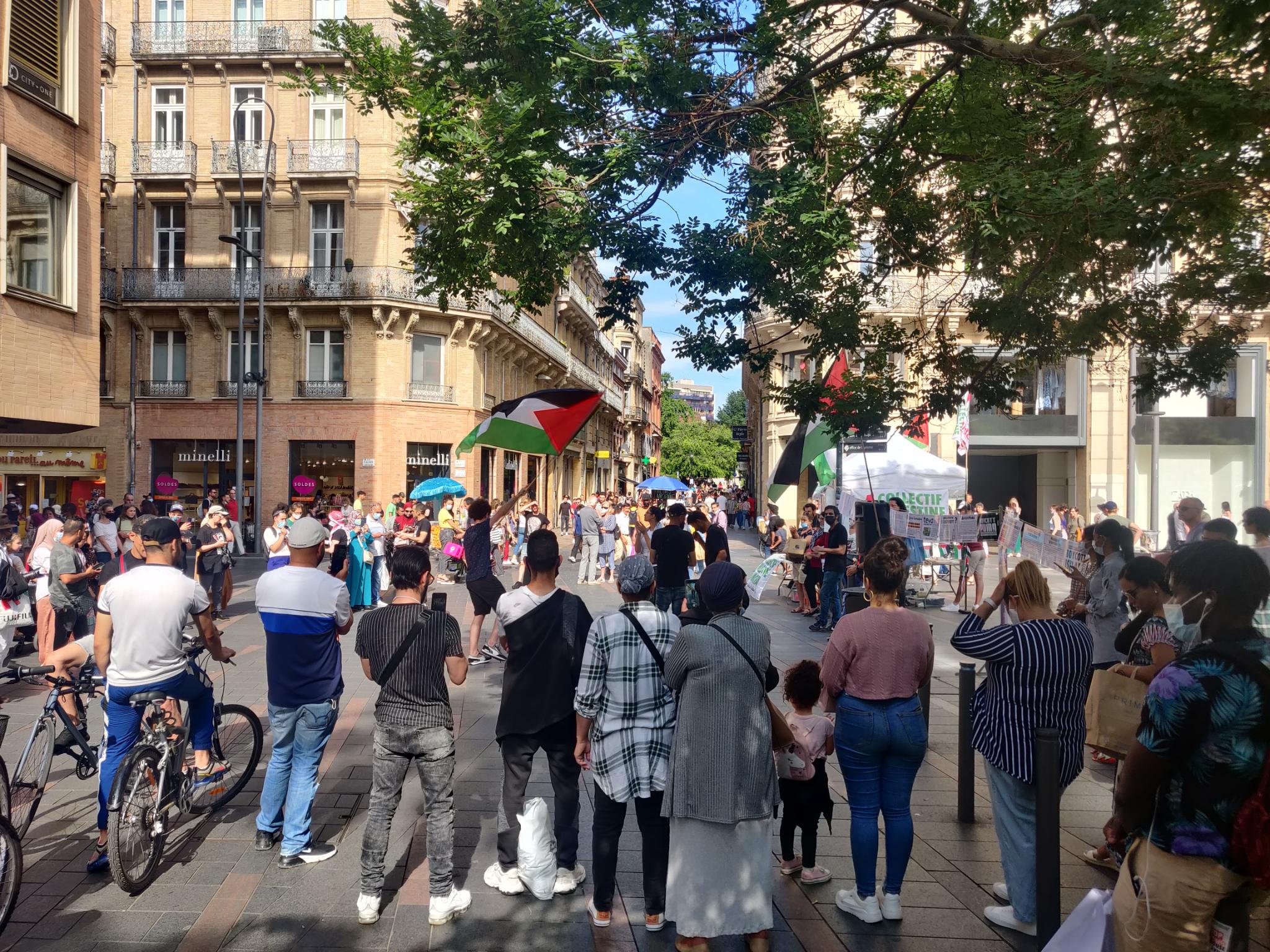 During the event, organizers spoke in French and Arabic about the current situation in Palestine and the importance of developing solidarity campaigns in France. A Palestinian activist with the Collectif Palestine Vaincra emphasized (full speech below, in English translation): “Confronting racism, colonialism and all those supporting the Zionist occupation, we are together today to say: No to the ongoing Zionist crimes! No to ethnic cleansing! No to the siege on Gaza!…We also come to say: Yes, to Palestinian resistance throughout occupied Palestine! Yes to the Intifada and the ongoing popular uprising in Palestine! Yes to the ongoing resistance in Gaza!” 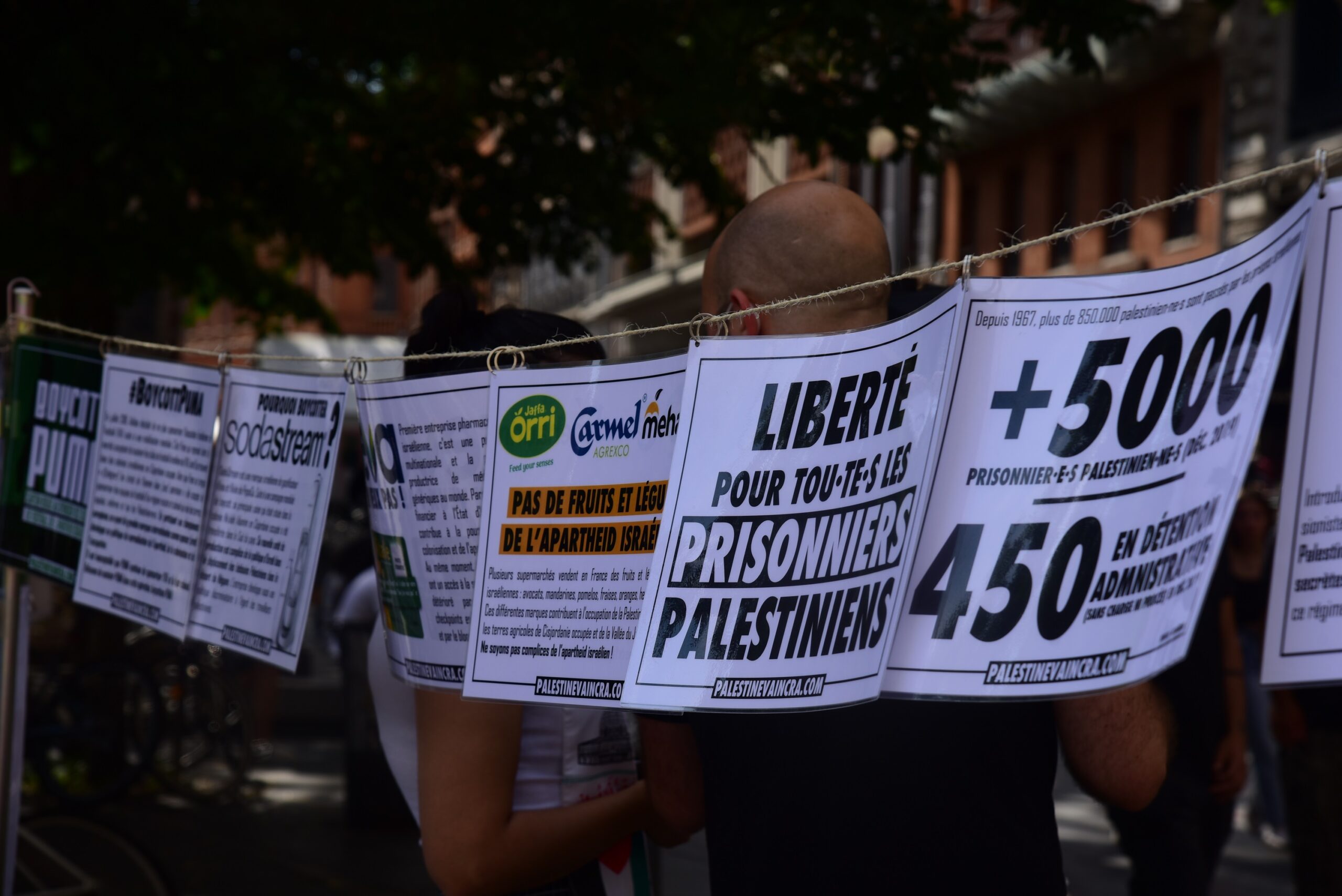 Many people joined to participate in the stand, listen to the speeches, chant in French and Arabic or collect stickers and flyers for Palestine. Dozens of Toulouse residents took solidarity photos in order to reaffirm their commitment to support Palestinian resistance.

During the two-hour stand, speeches alternated with Palestinian music and Dabkeh dance; many people participated in these celebrations of Palestinian culture in the heart of Toulouse. 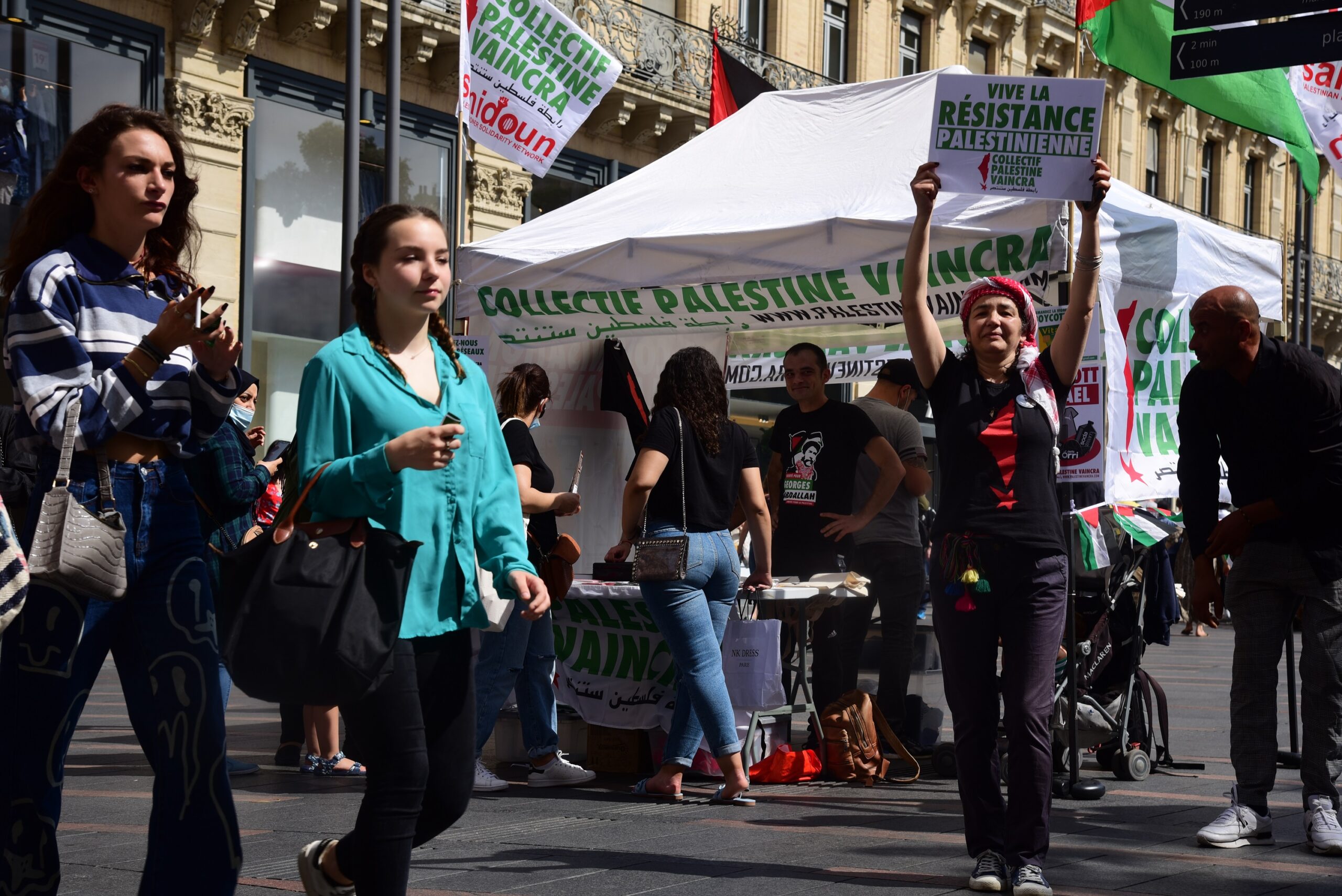 Speech of the Collectif (originally in Arabic, translated below): 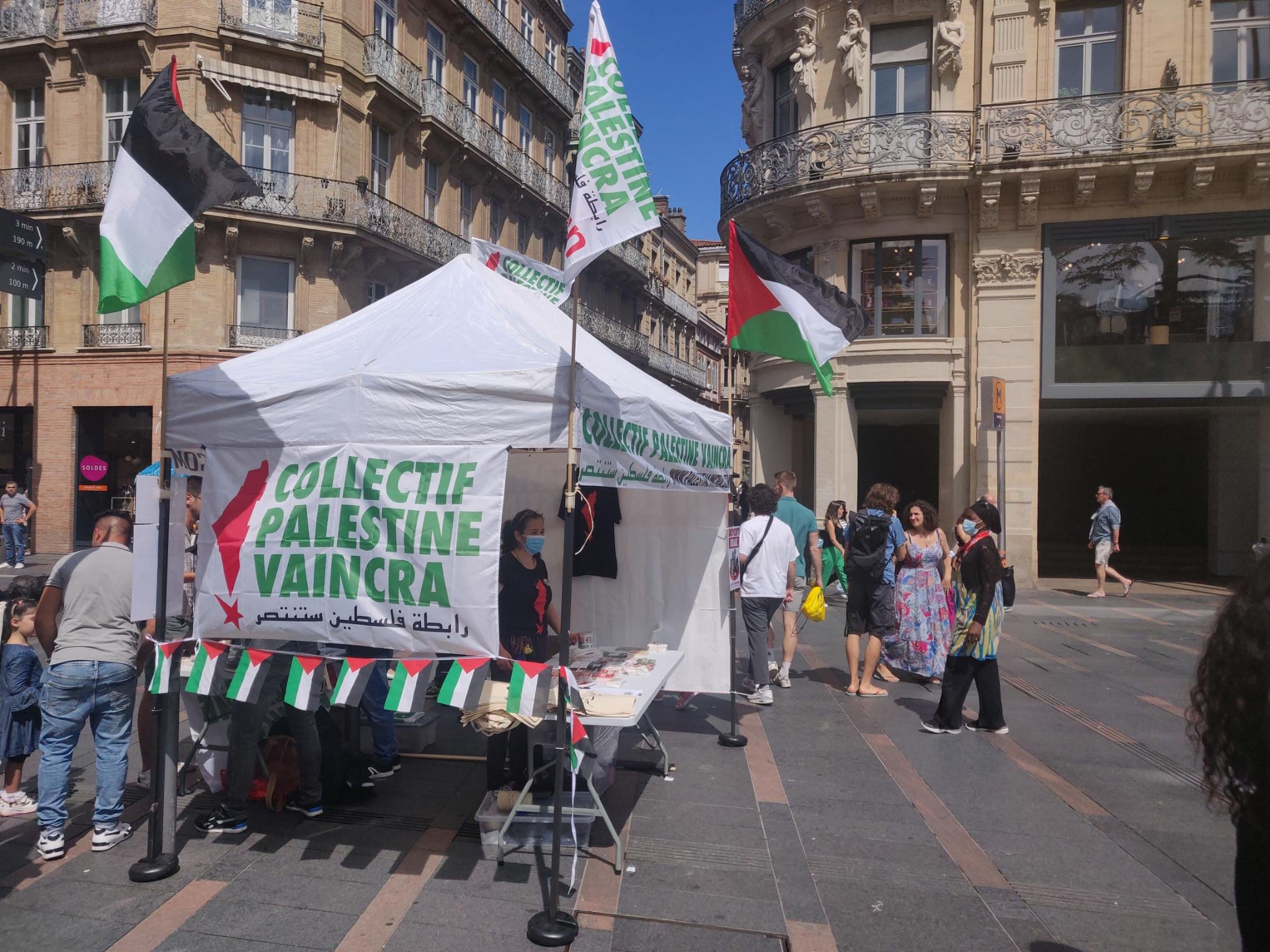 On behalf of the Collectif Palestine Vaincra, we salute you all for your presence, and we welcome you with us to this event. Today, we stand together to participate effectively alongside our people in occupied Palestine, so that we can say in a clear and loud voice that we will continue our stands and activities in support of the Palestinian people everywhere. Today, we stand against the continuing crimes of the Israeli occupation against our people in occupied Jerusalem and all of Palestine. Confronting racism, colonialism and all those supporting the Zionist occupation, we are together today to say: No to the ongoing Zionist crimes! No to ethnic cleansing! No to the siege on Gaza!

We all read and know the crimes committed by “Israel” and its Zionist army every day, every hour, against the Palestinian people, crimes taking place in full view of the world. We all know, and we all suffer, but what is required today is that we continue our movement to affirm our position in support of the Palestinian liberation struggle and to be an integral part of that struggle..so that we build together a revolutionary, new and alternative popular movement..

We in the Collectif Palestine Vaincra consider ourselves part of the popular call and initiative to build an alternative, new revolutionary path for the liberation of Palestine.

What is happening in occupied Jerusalem calls us to do so, and what is happening to suppress the issue of refugees and their rights calls us to do so. The cries of the prisoner Israa Jaabis and the 4,500 female and male prisoners call us to do so. All the houses of occupied Jerusalem standing against destruction are calling us to forge a new revolutionary Palestinian path, towards a united and international, Palestinian, and Arab popular movement, with the defeat of the Zionist entity as our goal. 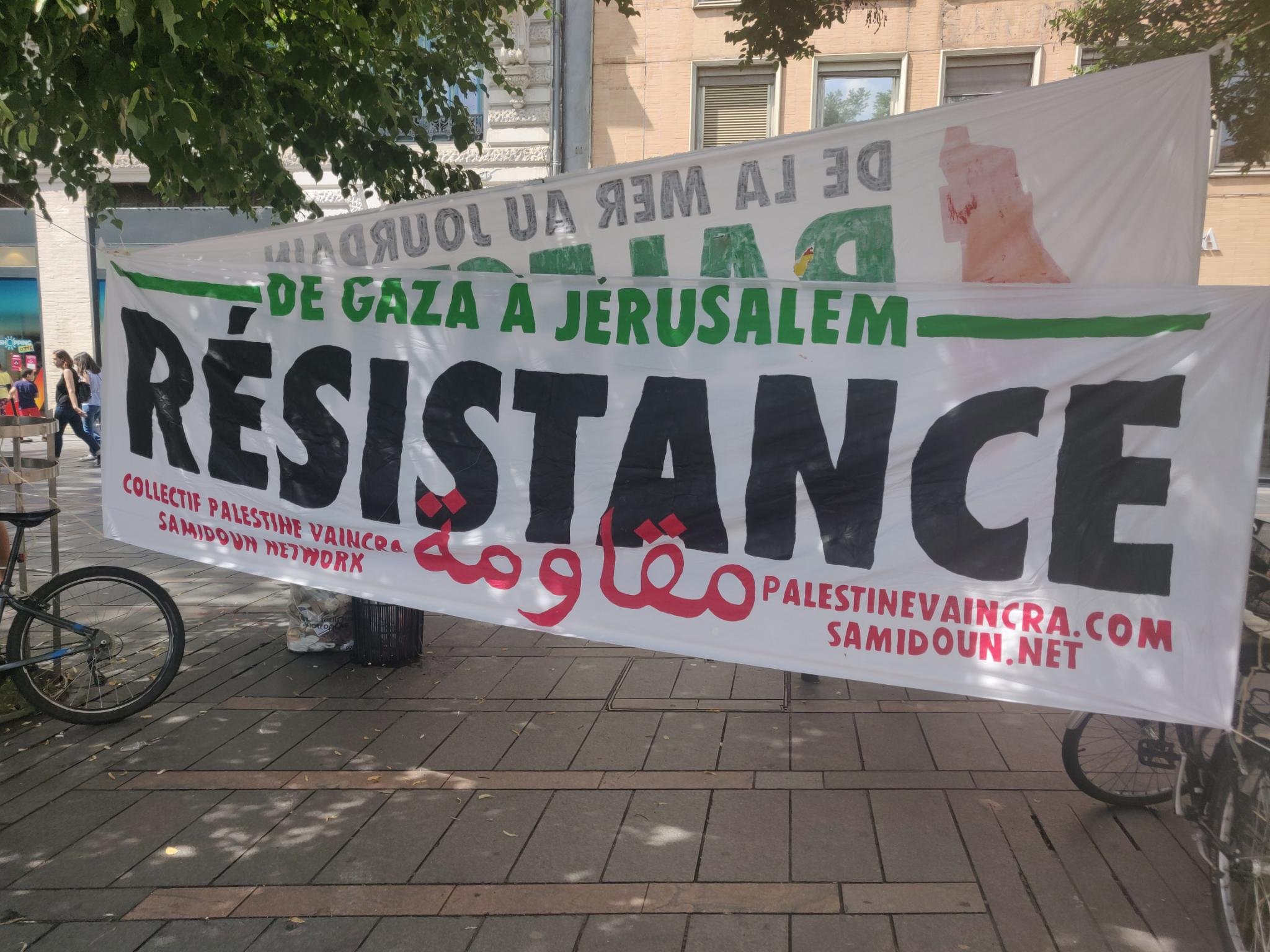 Friends,
You have been following what is happening in the occupied West Bank lately.

After the recent victories that the Palestinian people achieved through struggle, work and blood, some are trying to divert the national and popular compass from the struggle in Jerusalem and Palestine…Therefore, we see the horrific and heinous operation rejected by the entire Palestinian people, the assassination of the revolutionary fighter and intellectual Nizar Banat.. Today we say: the blood of the martyr Nizar Banat lives on…and loyalty to him is loyalty to Palestine and all the martyrs.

We say with heartache, sadness and pain that it is not possible for us to stand up to the occupation and achieve victory over it and its allies, here in France or in Palestine or anywhere, except through the unity and cohesion of our popular position against every party that oppresses and acts against our Palestinian people and works to silence our voices and distort the image of our national vanguard and distort our people’s struggle for liberation and return.

The Palestinian people, who have been fighting colonialism for a century, will not surrender and will not be intimidated by the forces of occupation and oppression. They will continue their struggle until liberation and return.