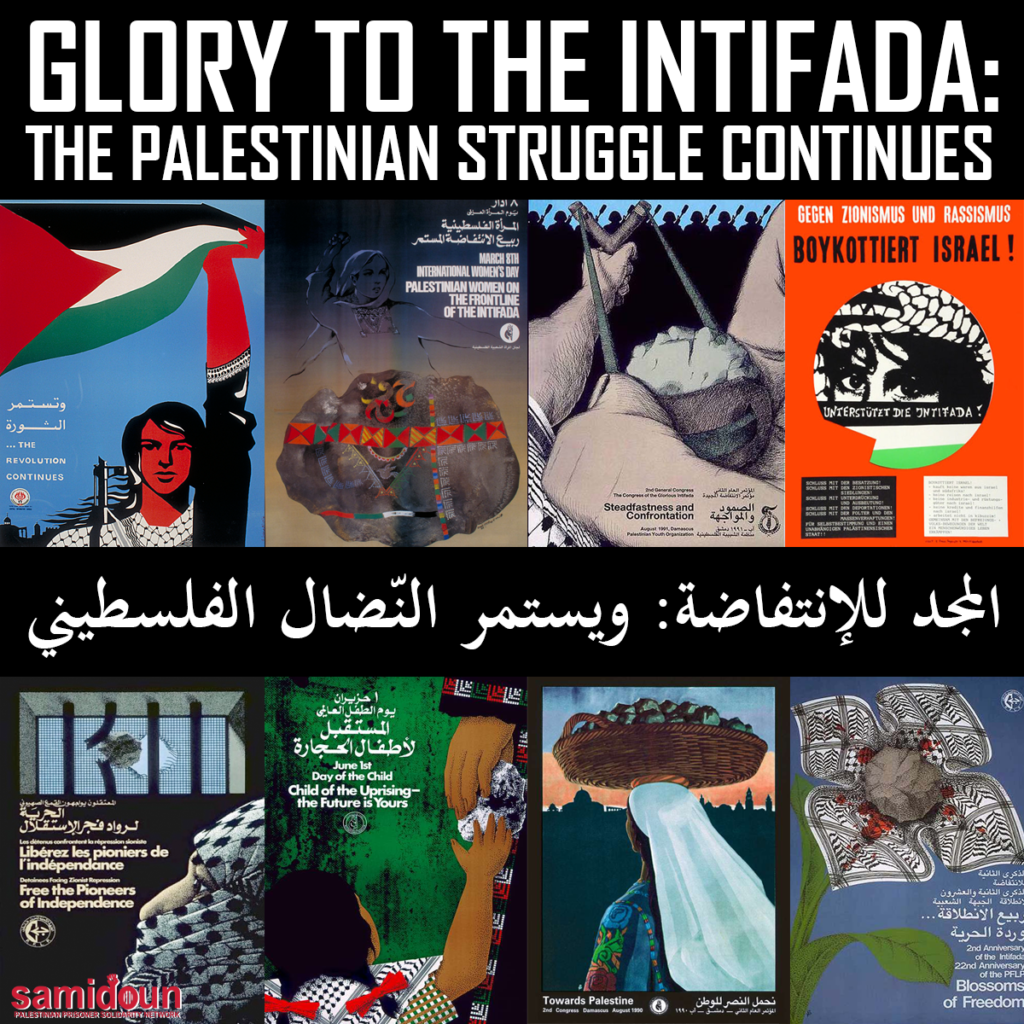 As we mark the 34th anniversary of the great Palestinian popular Intifada, which launched from Jabaliya refugee camp in Gaza on 8 December 1987, Samidoun Palestinian Prisoner Solidarity Network salutes the ongoing struggle of the Palestinian prisoners, on the front lines behind bars, and the entire Palestinian people, inside and outside Palestine, on the continuing road to liberation and return. The steadfastness of the Palestinian prisoners is perhaps exemplified in the courage of the Freedom Tunnel self-liberators, who despite decades of imprisonment, continue to fight for freedom for themselves and for their land and people.

The Intifada is not only a historical moment but an ongoing liberation struggle and an example to the world of the full mobilization of the people for justice and freedom. We join with the Masar Badil (Palestinian Alternative Revolutionary Path Movement) in calling for a conference of Palestinian students in 2022 and the Week of Palestinian Struggle in May. Below, we are republishing an edited version of our 2020 statement on the Intifada anniversary. We are also providing two resources below: “Ansar III,” a historical documentation effort of the detention of Palestinians during the Intifada; and a collection of posters of the Intifada.

Launched by the murder of four Palestinian workers, mowed down by an Israeli occupation army truck in Jabaliya refugee camp in Gaza, Palestinians took to the streets in massive numbers on 8 December 1987, building their movement, collectives and institutions, uniting around the messages of the Unified National Leadership of the Uprising, boycotting Israel and practicing all elements of popular struggle and collective resistance. Women, youth and workers played a central role in leading the intifada, organizing committees in every village, town and city to mobilize all efforts for a revolutionary society conceived in resistance to colonialism.

The Intifada not only unified Palestinians inside Palestine, but also those in exile and diaspora. It was the power of the Intifada that broke the siege of the refugee camps of Lebanon and sparked large-scale organizing in Palestinian communities around the world as well as a major upsurge in Palestinian solidarity organizing.

Of course, the Intifada was also met with vicious repression: mass imprisonment, vicious torture under interrogation, and Yitzhak Rabin’s infamous “breaking bones” policy. Indeed, hundreds of thousands of Palestinians were detained and imprisoned by occupation forces during the Intifada, over 120,000 wounded and hundreds killed.

Hundreds of thousands of Palestinians – some estimates reaching up to 600,000 – were detained, and tens of thousands subjected to ongoing imprisonment by Israeli occupation forces during the Intifada.

There, they experienced severe torture under interrogation, harsh conditions of confinement, medical neglect and abuse, collective punishment and home demolitions targeting their families, brutal beatings and mistreatment and the widespread and systematic use of administrative detention, imprisonment without charge or trial.

In a failed attempt to suppress the Intifada, the Israeli occupation launched new prison camps and detention centers to hold the thousands of Palestinians detained in mass arrests throughout occupied Palestine. Palestinian prisoners continued their resistance and their intifada behind bars, building and deepening the “revolutionary schools” from which emerged so many brilliant young organizers.

The Intifada continued despite the threatening international conditions – from the fall of the Soviet Union and the Eastern bloc states, the threat of US imperialism dominating a unipolar world, to the first Iraq War and the attack on Arab self-determination.

It was also in this context that the Intifada, the sacrifices made by the Palestinian people and their accomplishments, were confiscated by a sector of the Palestinian ruling class in alliance with U.S. imperialism and Arab reactionary regimes, through first the Madrid conference and then to the Oslo accords signed in Washington, D.C., in 1993. This liquidationist “peace process” was an attempt to transform the revolutionary aspirations of the Palestinian people into a mere self-rule project adjacent to Zionist colonialism.

The vision of the Intifada has never been defeated, denied or suppressed. It lives on – just as it has for decades upon decades, in uprising after uprising. In Palestine, in the refugee camps, in exile and diaspora, and in every city of the world and every struggle for justice where the Palestinian flag remains a blossom of revolutionary hope, inspiration and vision for a liberated future.

On the 34th anniversary of the continuing Intifada, in honour of all those who sacrificed and fought for freedom, Samidoun Palestinian Prisoner Solidarity Network pledges to continue the struggle – until return, until liberation, from the river to the sea.

The following historical booklet, published in English in 1988 by ROOTS and Friends of Palestinian Prisoners, focuses on one such prison camp: Ansar III, “a barbed wire compound in the heart of the Negev desert.” At the time of the booklet’s publication, Janet Jubran of the Friends of Palestinian Prisoners noted in her introduction, “In one year, since the Intifada began, more than 25,000 Palestinians have been arrested. At this moment, nearly every family has one or more of its members in prison.”

Posters of the Great Palestinian Intifada

The posters below convey only a portion of the creativity, vision and collective power of the continuing intifada, inside Palestine, among Palestinians in the camps, in exile and diaspora and among Arabs and internationalists. Most below are republished from the Palestine Poster Project: