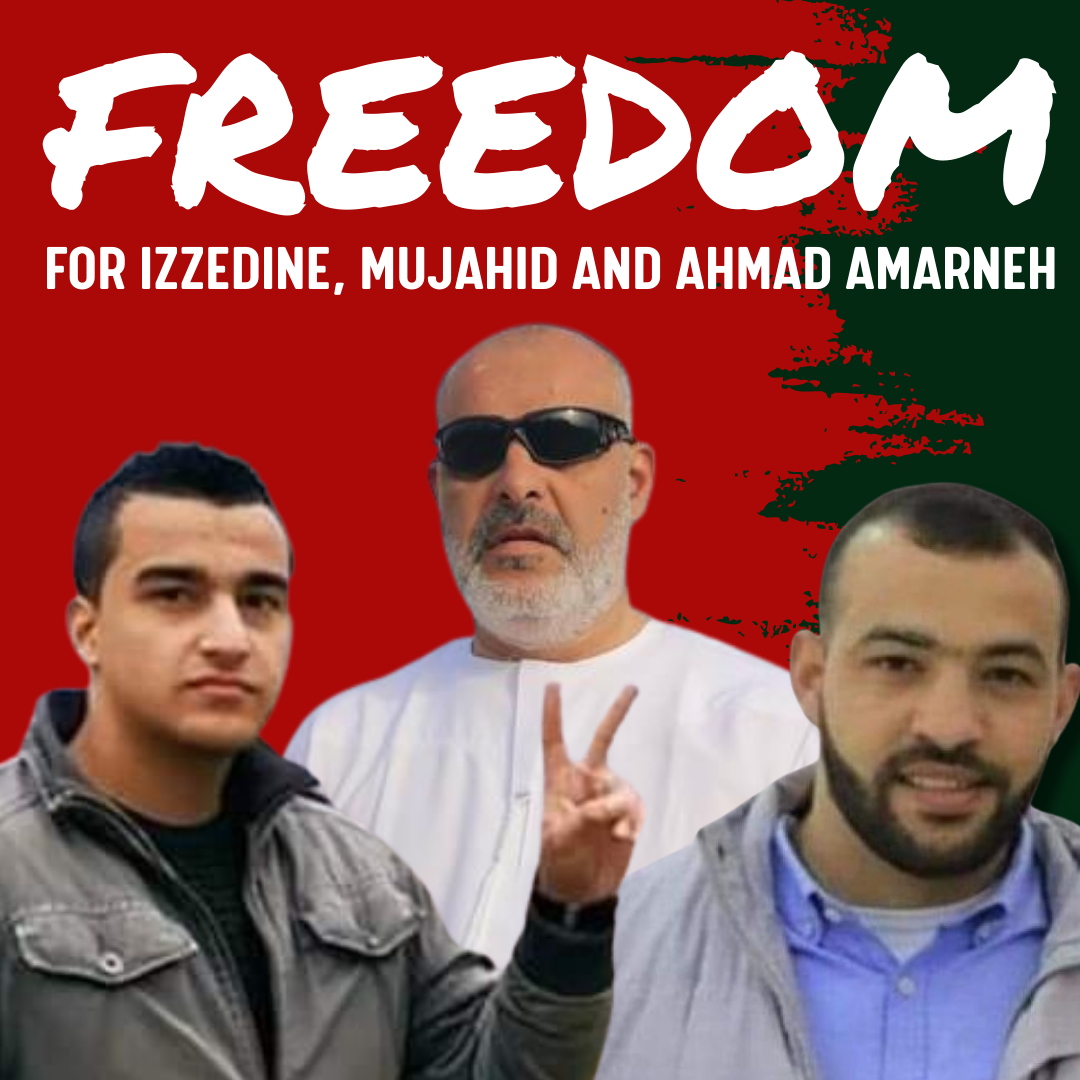 This PA security coordination with Israeli occupation forces was established under the Oslo accords, cementing the PA’s role as a subcontractor and security guard for the occupation, funded and trained by the imperialist forces allied with Zionism, especially the United States, the European Union, Canada and others.

Sheikh Izzedine Amarneh, a blind Islamic religious scholar who recently received his doctorate from a university in Malaysia, was seized from the family home in Yabad on 21 February 2022. He was almost immediately ordered to six months in administrative detention, Israeli imprisonment without charge or trial. 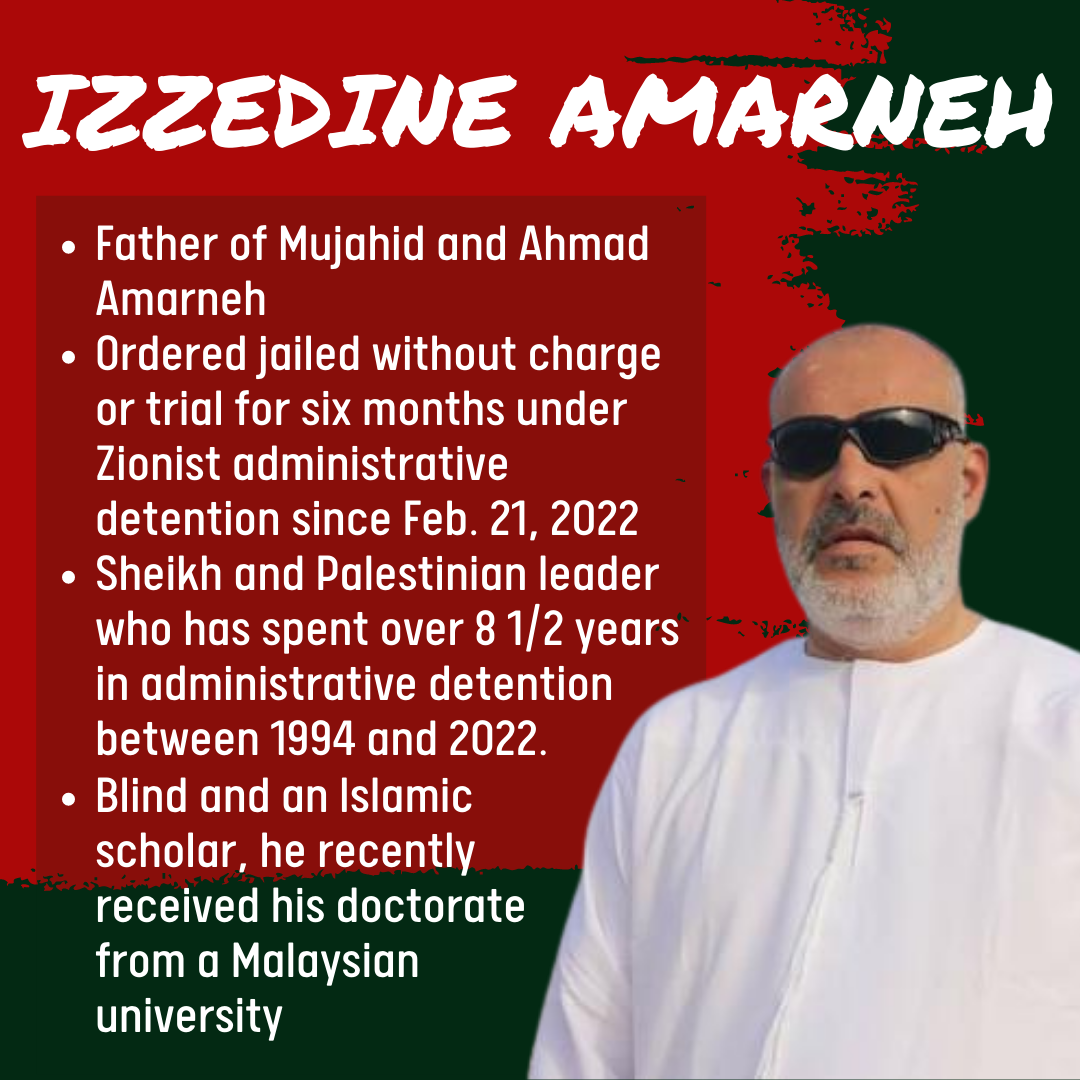 He is one of approximately 500 Palestinians — out of 4,650 total Palestinian prisoners — imprisoned without charge or trial under administrative detention. These orders are based entirely on secret evidence and are indefinitely renewable. Indeed, Amarneh himself has spent over 8 1/2 years in administrative detention in addition to serving a prison sentence for his political and religious activity imposed upon him by the Israeli military courts, through 12 arrests between 1994 and 2022.

The administrative detainees are currently boycotting the Israeli military courts since 1 January 2022. Their collective boycott is a demand to end administrative detention once and for all and to make it clear that they will not allow a fig leaf of judicial process to be laid atop their arbitrary detention without charge or trial. 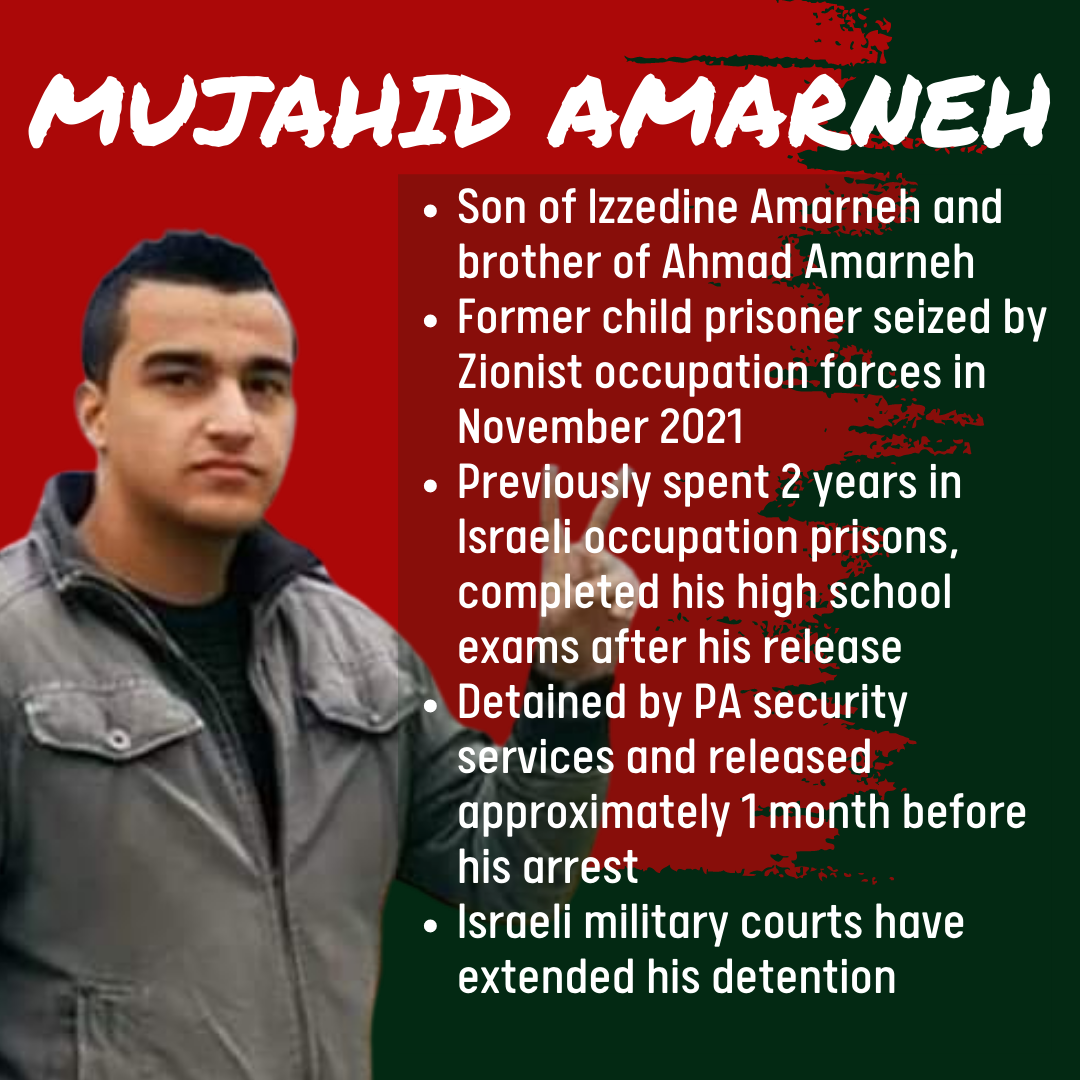 When Sheikh Izzedine Amarneh was seized from his family home in a violent night raid, he joined his son, Mujahed Amarneh, who is being brought before an Israeli military court. He was seized from the family home in November 2021. Mujahed Amarneh was previously seized by the Israeli occupation forces as a 17-year-old high school student, forced to take his high school exams two years late after he was finally released from occupation prisons.

Since that time, he has been detained on multiple occasions by the Palestinian Authority security forces over posts on Facebook criticizing the PA leadership and supporting the Palestinian resistance. Most recently, he was released by PA security services approximately one month before his arrest in November. This is often referred to as the “revolving door,” in which Palestinians are repeatedly arrested and released by Israeli occupation forces and Palestinian Authority “security” forces, part of the structure of repression that characterizes security coordination.

On 14 March, the military court once again extended Mujahed Amarneh’s detention until 9 May 2022.

After the arrest of his father in a violent night raid, Ahmad Amarneh, Mujahid’s brother and a former Palestinian prisoner in Israeli jails, spoke to the media about his concerns for his father’s safety, health and well-being:

“My father shouted to the Israeli occupation soldiers to wait a little for him to open the door for them instead of storming the house, but they blew up the door. Although they knew that my father was a blind person, they took off his glasses and blindfolded him for fear that he would see…

My father will not be able to act when facing repression and brutality. How will he protect himself, and how will he stay away from the soldiers who act brutally? We know that the sighted prisoners are unable to protect themselves in such difficult situations, how is my father, who also needs to be accompanied by a fellow prisoner in every steps? He fell and was injured several times during his previous arrests in desert prisons.” 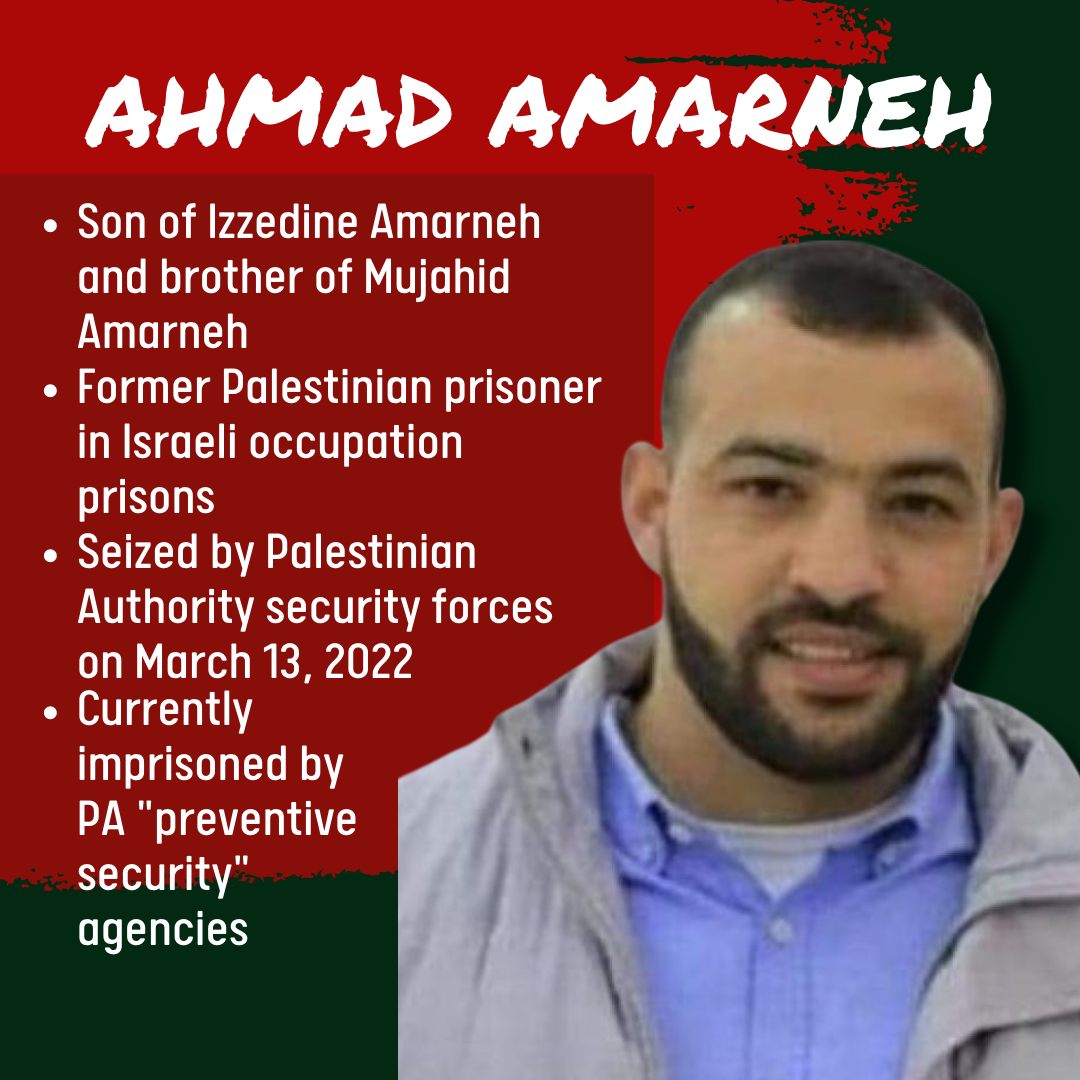 On 13 March, Ahmad Amarneh, a student at Kadoorie University, was seized by Palestinian Authority security forces from his workplace and is currently being imprisoned by the “Preventive Security,” responsible for PA political detention and carrying out the policy of security coordination with the Israeli occupation.

Ahmad and Mujahed’s sister, Yaman Amarneh, was also detained by the Israeli occupation while a student at the Faculty of Law at Al-Quds University in Abu Dis before her release one month later.

The targeting of the Amarneh family is not an individual or unique case, but an example of the colonial weapon of imprisonment used to target the Palestinian people and their resistance. It is also an example of the role of the Palestinian Authority as a security subcontractor for the Israeli occupation, carrying out policies of political detention in tandem with Israeli priorities for repressing the resistance movement.

Samidoun Palestinian Prisoner Solidarity Network urges the immediate release of the Amarneh family and all Palestinian prisoners in Zionist, Palestinian Authority, imperialist and reactionary regime prisons. All 4,650 Palestinians behind bars reflect the struggle of the Palestinian people for freedom, justice and liberation throughout occupied Palestine, from the river to the sea. 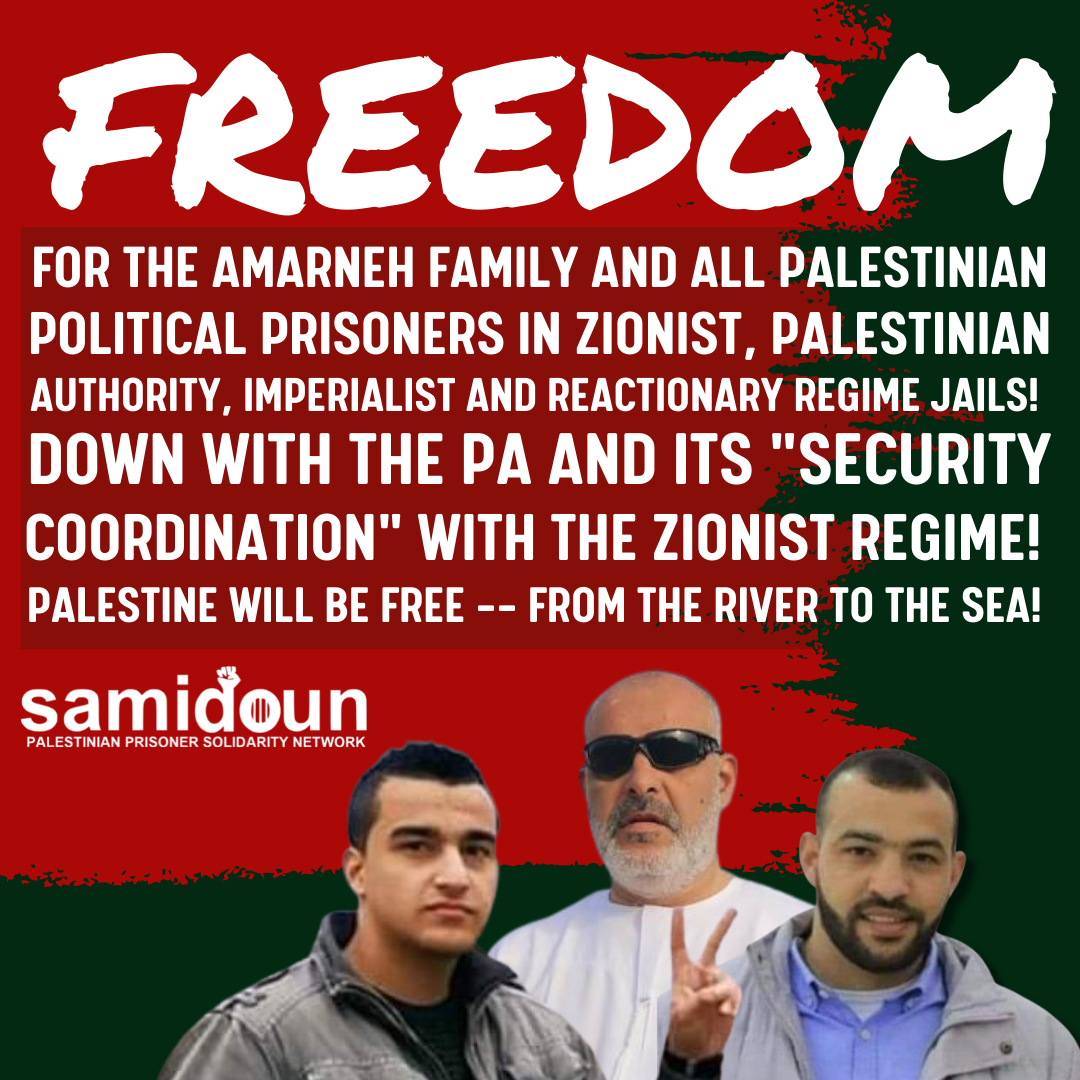