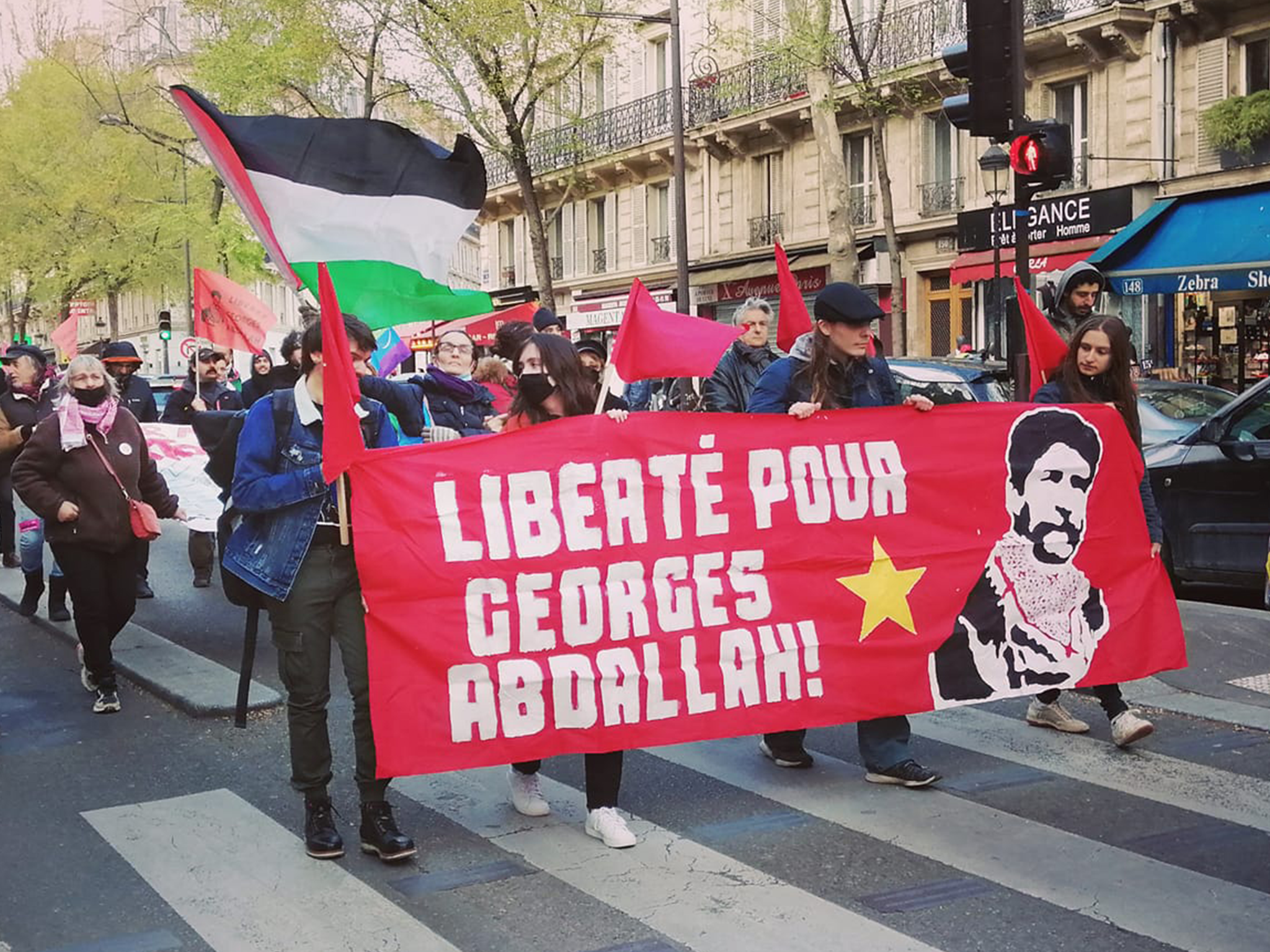 On Saturday, 2 April — Georges Abdallah’s 71st birthday — people across France and around the world joined in an international day of action to demand the freedom of the Lebanese Arab Communist struggler for Palestine imprisoned in France for over 37 years.

Abdallah, the longest-held political prisoner in Europe, has been eligible for release since 1999, yet his release has been blocked by interventions at the highest levels of the French and U.S. governments. He is part and parcel of the Palestinian prisoners’ movement, even joining in collective hunger strikes from his prison cell in Lannemezan.

In Tunis, activists with the Tunisian Committee for the Liberation of Georges Abdallah organized a solidarity stand outside the French embassy calling for Abdallah’s liberation.

In Bordeaux, activists from multiple organizations, including representatives of the CGT labor federation, rallied at a central square to urge Abdallah’s freedom. 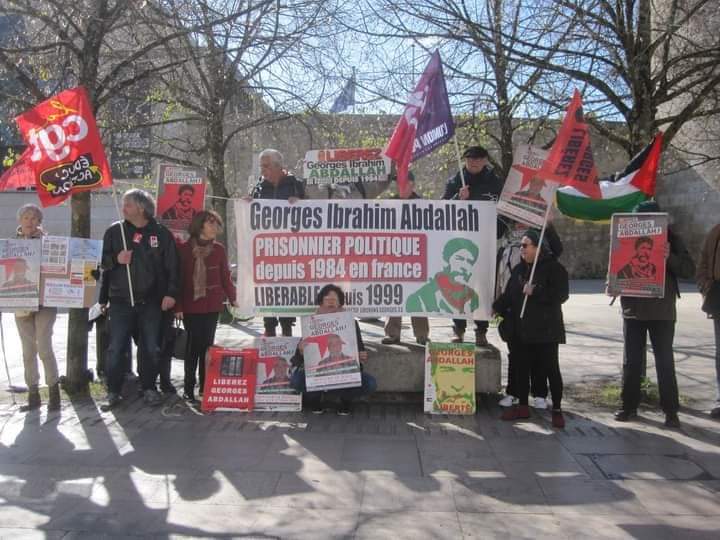 In Marseille, dozens of activists rallied at a demonstration organized by the National Association of Communists (ANC), calling for Abdallah’s liberation. 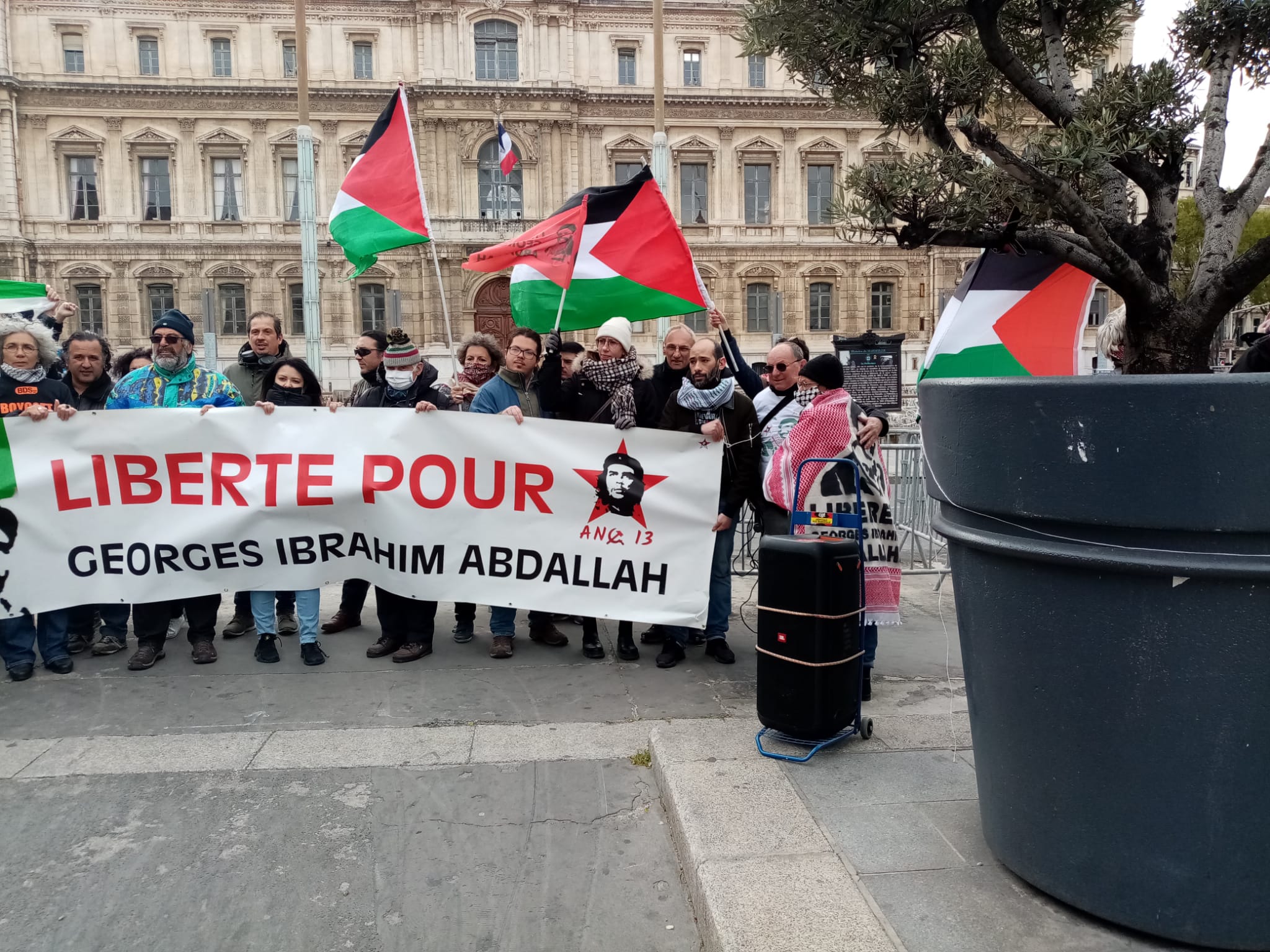 In Lyon, activists from the Ligue de la Jeunesse Révolutionnaire (League of Revolutionary Youth), hung a banner calling for Georges Abdallah’s freedom and liberation for Palestine, as well as distributing information to residents of the neighborhood.

Activists in Lyon also reported the presence of a poster on the city’s prefecture calling for Abdallah’s liberation.

In Paris, activists marched through the streets in a mass rally called by the Coordination to Support the Palestine Resistance, proceeding from Barbès to République. Members of many organizations spoke and marched in a spirited demonstration affirming full solidarity with the liberation of Palestine. 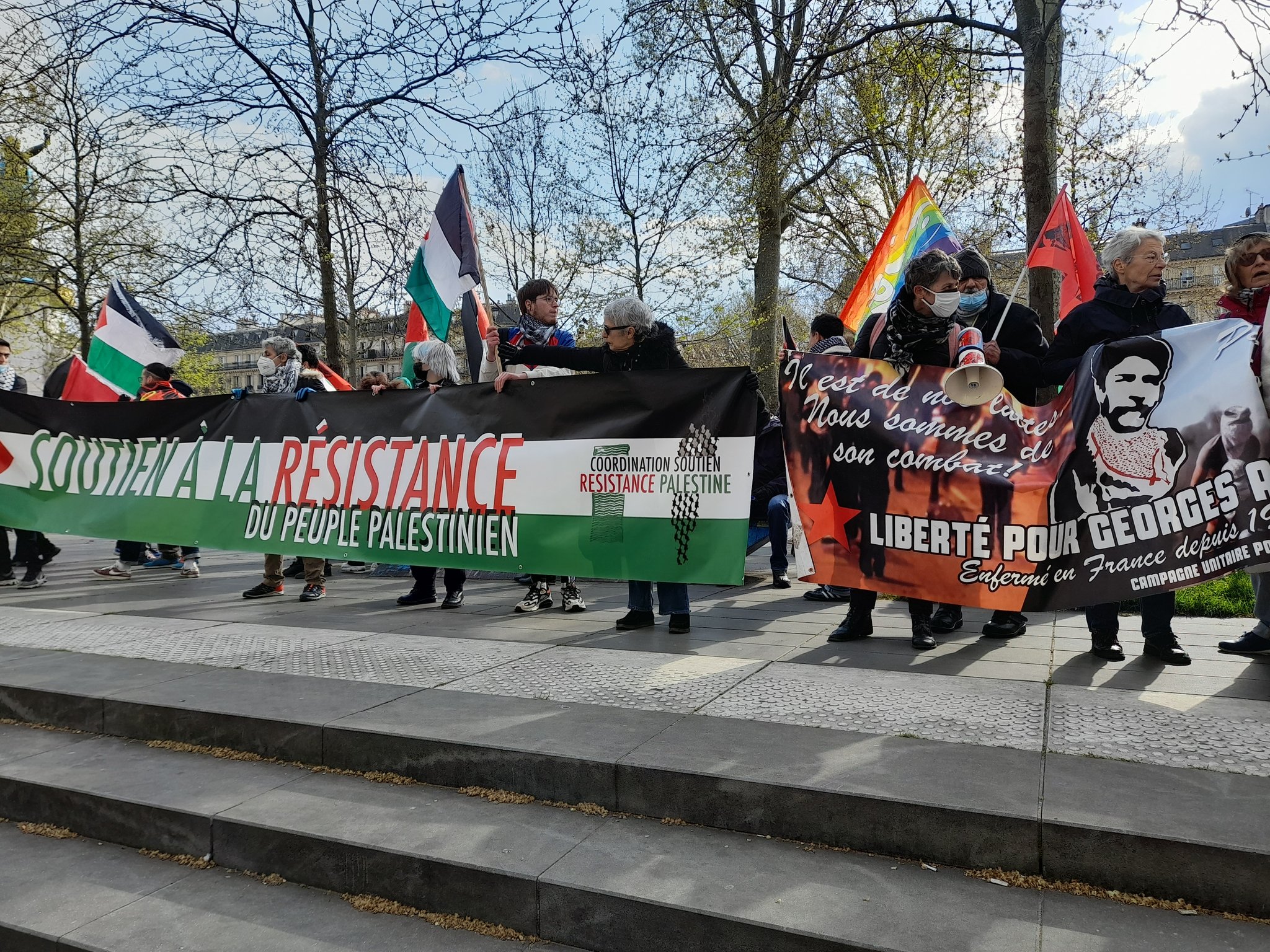 In Lannemezan, over 100 people rallied outside the prison where Georges Abdallah is held, demanding his release, including representatives of political parties and trade unions, such as the CGT union federation. 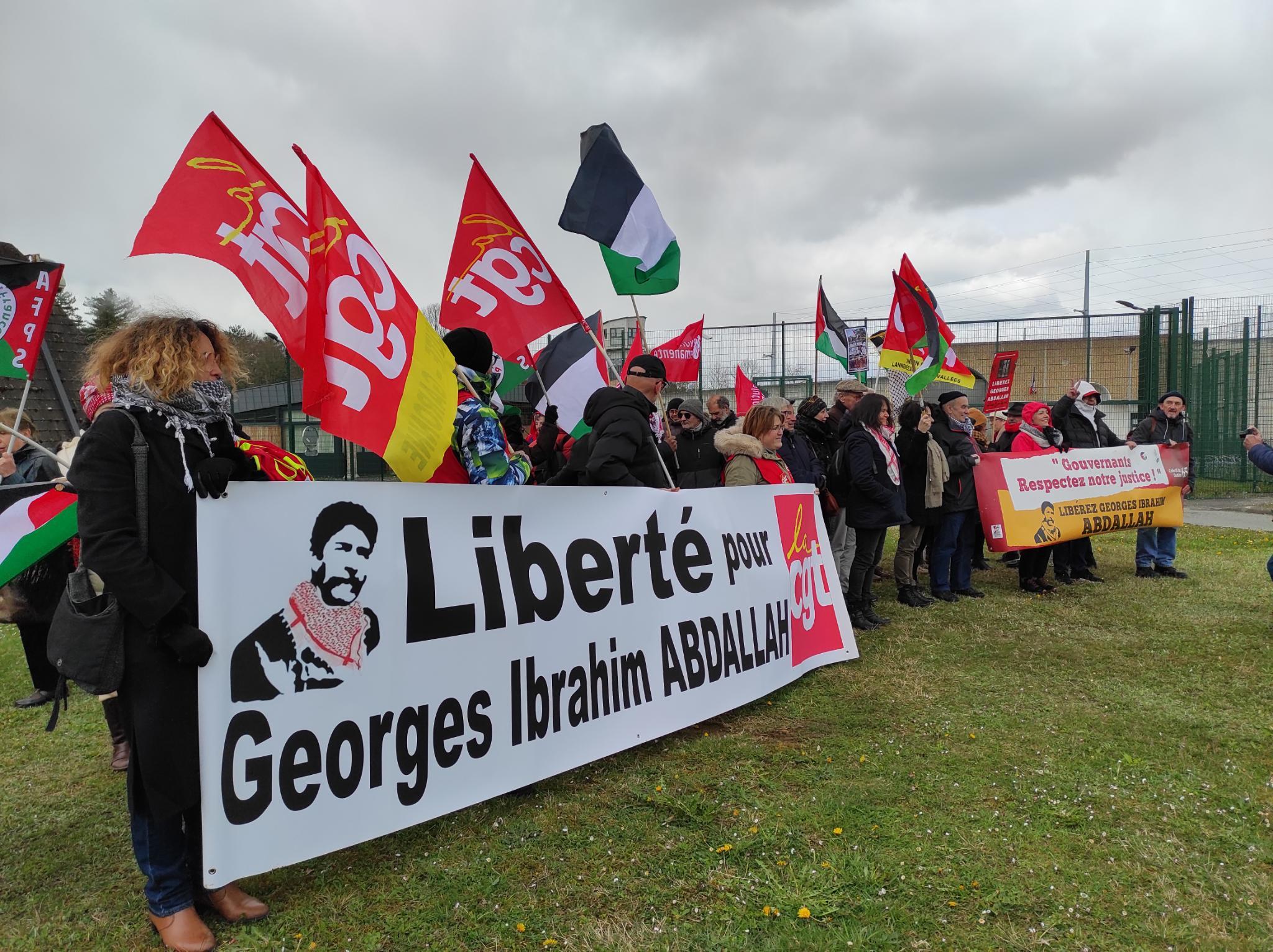 Participants, who came from cities and towns including Bordeaux, Tarbes, Lannemezan, Pau, Toulouse, Auch and Montauban, also called for the liberation of Salah Hamouri, the French-Palestinian lawyer and human rights defender subjected to an extended campaign of forced displacement and repression by the Israeli regime and currently jailed without charge or trial under administrative detention. 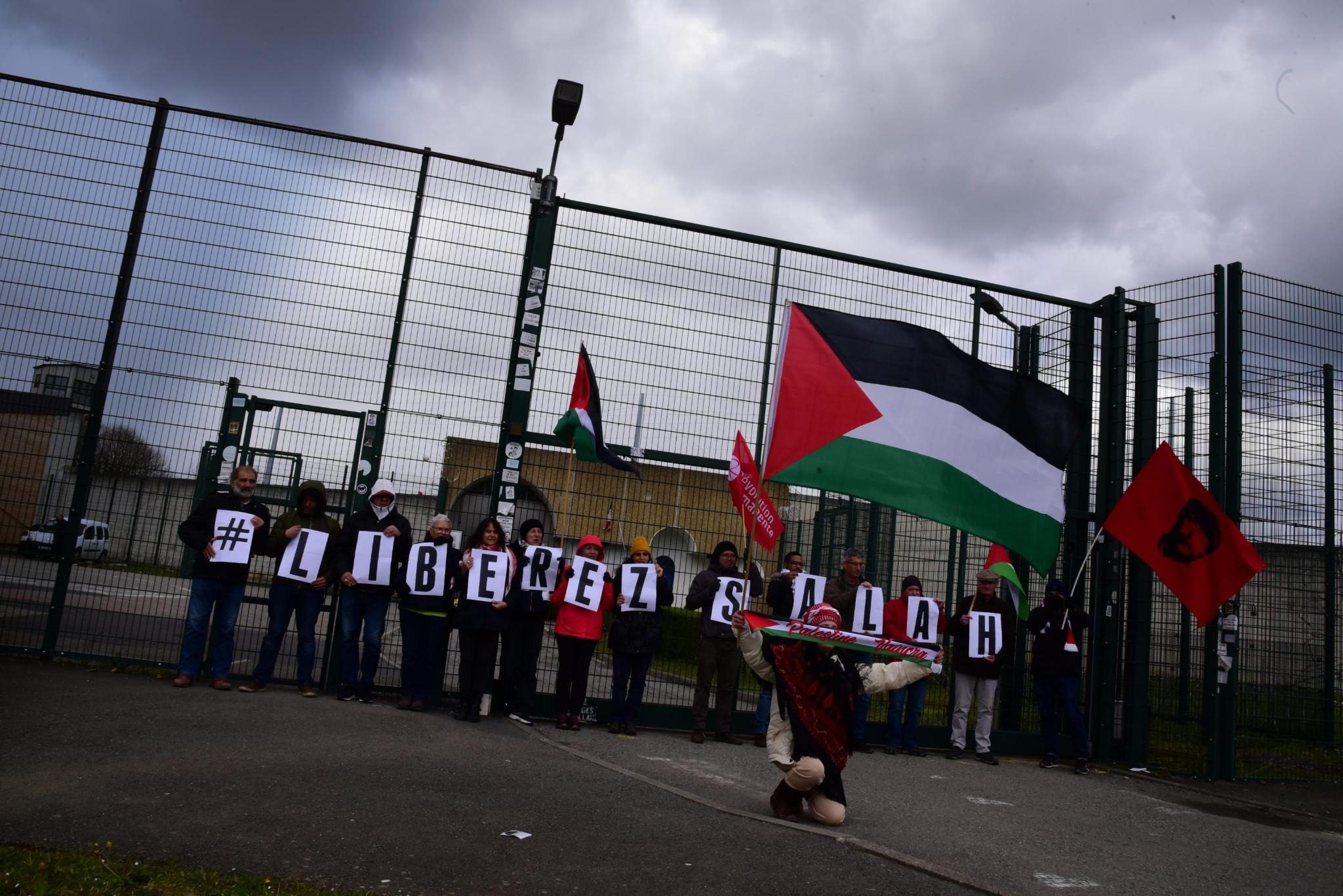 Philippe Poutou of the NPA later also highlighted the case in a TV appearance.

Following the rally, which included calls for the liberation of Georges Abdallah, participants gathered outside the French embassy to call for Abdallah’s liberation and denounce France’s criminalization of pro-Palestine and antifascist organizations, including the Collectif Palestine Vaincra and the antifascist group of Lyon (GALE).

In Vancouver, Canada Philippines Solidarity for Human Rights launched their Revolutionaries are Not Terrorists (RANT) campaign with a speaking event, with the participation of Charlotte Kates, international coordinator of Samidoun; Coni Ledesma, of the National Democratic Front of the Philippines; and Natalie Knight, urban Indigenous organizer and chair of the Friends of the Filipino People in Struggle in Vancouver. In her presentation, Kates discussed the case of Georges Abdallah and France’s criminalization of Palestine solidarity as part of the system of “anti-terror” repression used by imperialist powers to repress peoples’ movements.

Participants in the event took a solidarity photo calling for freedom for Georges Abdallah and all Palestinian prisoners and an end to the dissolution of the Collectif Palestine Vaincra and other pro-Palestine associations. 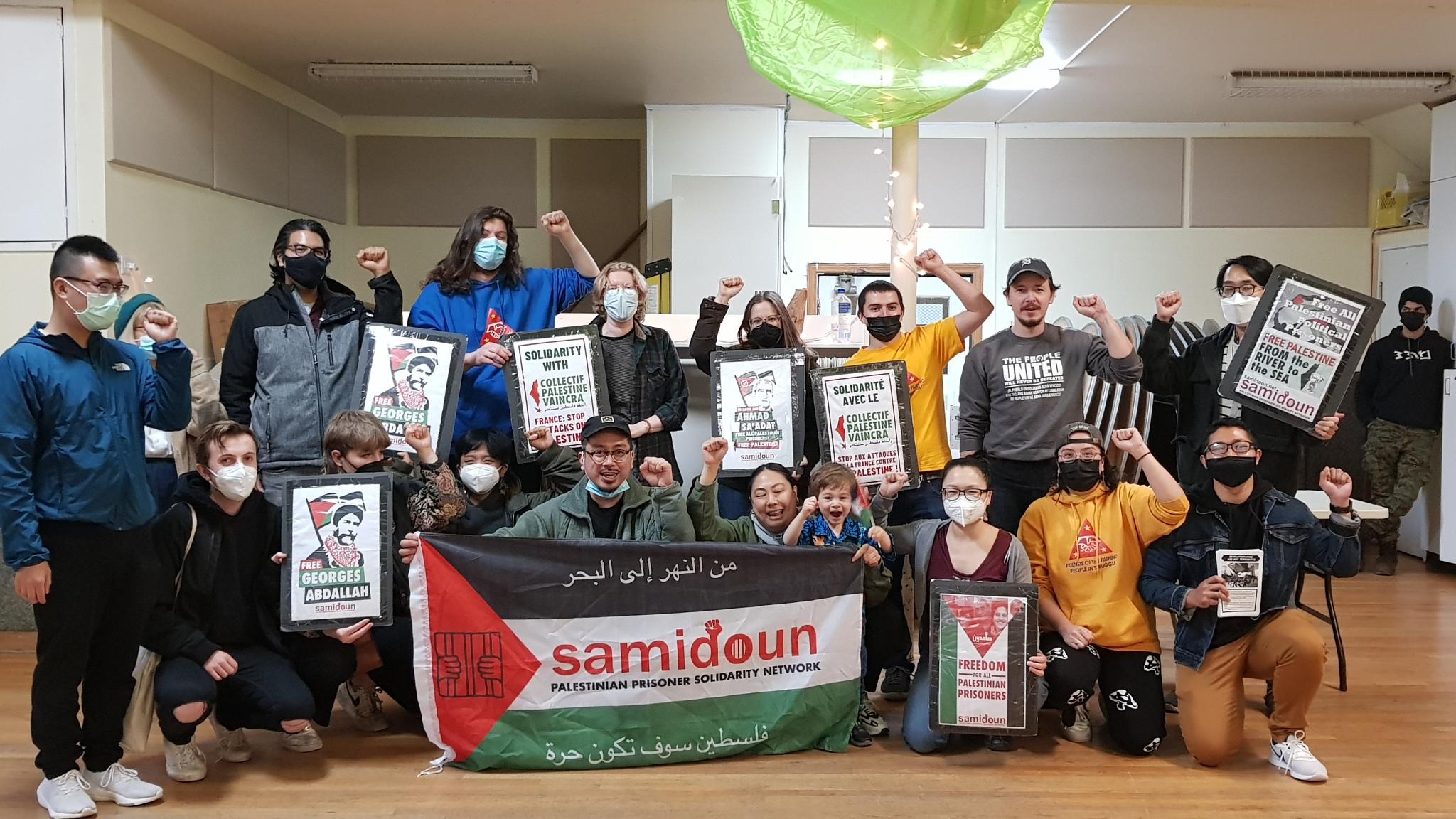 In Athens, Samidoun Greece and the Anti-Imperialist Front called for freedom for Georges Abdallah and all revolutionary prisoners.

From Athens as AIF and Samidoun we call for Freedom for G.I Abdallah
38 years in prison in France because he never surrended to Zionism and Imperialism!
Today is his birthday and also international day of solidarity!
Freedom for Palestine!@SamidounPP@FreeGIAbdallah pic.twitter.com/ngm16FRgu2

In Charleroi, Belgium, the Plate-forme Charleroi-Palestine organized a stand outside the offices of Belgian TV channels to call for Georges Abdallah’s freedom and bring the case to the doors of media outlets. The action received TV and online media coverage. 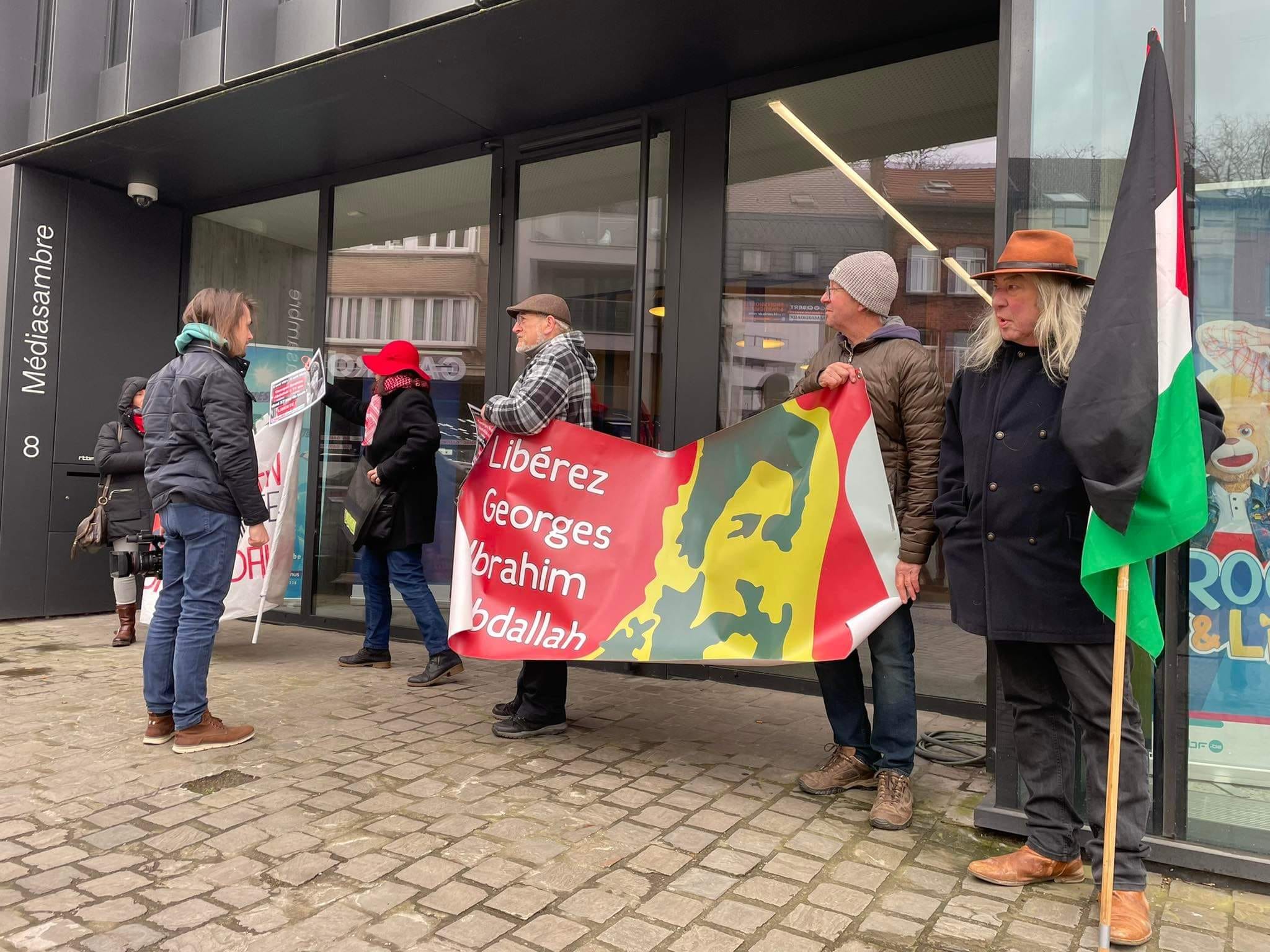 Activists from the Tunisian Youth Movement in Germany took photos with a banner calling for the freedom of Georges Abdallah.

The French state’s refusal to release Georges Abdallah is indeed a political decision; therefore, the fight for his liberation must, therefore, be carried out on the ground of the balance of political power. In this context, we call to join the many actions that will take place this Saturday, April 2, at the call of associations, trade unions and political organizations.

In France as elsewhere, defenders of the Palestinian cause are paying a heavy price for their commitment.

N​ación Andaluza, a political organization in Andalucia advocating for socialism and independence, issued a statement affirming their support for Abdallah and his liberation.

Georges Abdallah himself issued a statement for the day of action, read at many of the demonstrations, including those in Lannemezan and Paris:

Comrades and Friends, from behind the abominable walls, Ahmad Saadat, as well as the thousands of comrades imprisoned in Zionist jails, send you their revolutionary greetings and draw your attention to the fascist and supremacist groups raging in Ramleh, Lydda, Haifa and Umm al-Fahm openly supported by the Israeli police…

That said, Comrades, the Palestinian popular masses can rely, and must be able to rely upon your mobilization to confront all the nefarious propaganda of the imperialist bourgeoisie in your country in particular…

The conditions of detention in Zionist jails are getting worse day by day; and as you know Comrades, to confront this, international solidarity can prove to be an indispensable weapon…

Quite naturally, the Palestinian popular masses and their struggling vanguards in captivity can count more than ever on your active solidarity.

May a thousand solidarity initiatives flourish in support of Palestine and its promising resistance!

As part of Abdallah’s statement, he highlighted the dissolutions of the Collectif Palestine Vaincra and Comite Action Palestine as part of France’s attack on Palestine. Protests against the dissolution were part of many of the actions for the 2 April day of action.

On the Day of Action itself and on surrounding days, organizations and activists in various cities organized screenings of “Fedayin: Georges Abdallah’s Fight.” The first screening at a Tunisian university was organized on 29 March as part of a Land Day commemoration. A screening on 31 March highlighted Georges Abdallah’s story in Barcelona. In Bergamo, Italy, activists from Giovani e Palestina (Youth and Palestine) screened “Fedayin” on 2 April.

The film “Fedayin: Georges Abdallah’s Fight” addresses the life and struggle of the longest-held political prisoner in Europe. It is available with appropriate subtitles in French, Arabic, English, German, Turkish, Italian, Catalan and Castilian Spanish. If you want to show Fedayin in your area, email us at samidoun@samidoun.net and contact the directors at vacarmesfilms@gmail.com. We will help you to get your screening organized, and the directors are available to attend your events in person or to join your in-person events via video link.