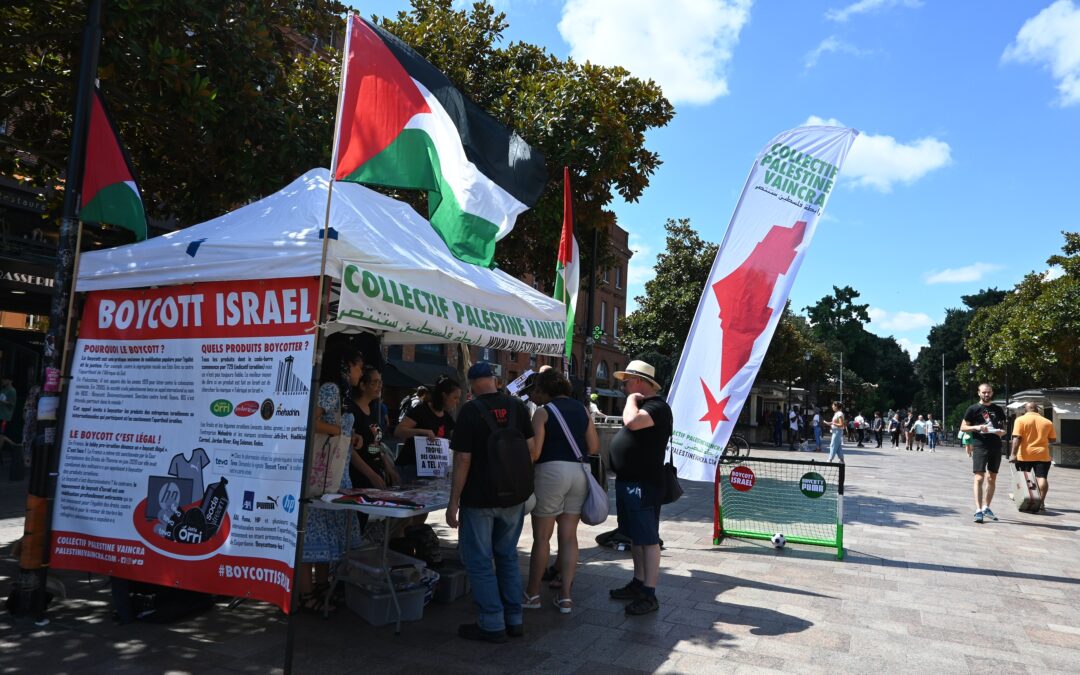 On Saturday, 30 July, the Collectif Palestine Vaincra organized a Palestine stand at Jean Jaurès metro station in the heart of the Toulouse city center as part of the mobilization against the Champions Trophy tournament taking place in Tel Aviv. PSG and FC Nantes, two major French football clubs, will play their match on Sunday, 31 July, on stolen Palestinian land confiscated by Zionist occupation forces in the 1948 Nakba. The holding of this French football tournament in Tel Aviv is clearly being done in order to promote Israeli colonialism and apartheid.

For over two hours, participants distributed hundreds of flyers to educate people in Toulouse about the political context of this sporting event. This is underlined by the appeal against the Champions Trophy in Tel Aviv signed by over 100 organizations, football clubs and fan associations: “The Professional Football League is organizing this event with Sylvan Adams, Israeli-Canadian businessman, self-proclaimed ‘ambassador of the state of Israel’, and Comtec Group, an Israeli event production company whose clients include the Israeli government and corporations based in illegal settlements in the occupied West Bank. For several years, Sylvan Adams has been investing in high-level sport to change and enhance the image of Israel.”

Many speeches over the sound system explained why it is important to boycott the Champions Trophy in Tel Aviv. Speakers also intervened to denounce the double standards of the European and international football authorities which found it easy to sanction Russia but see nothing wrong with Israeli policy. The organizers highlighted the #UEFAKickOutApartheid campaign, calling for people to sign the petition and demand an end to football complicity in colonialism. Organizers also addressed the #BoycottPUMA campaign, demanding the German athletic wear manufacturer not renew its sponsorship of the Israel Football Association. 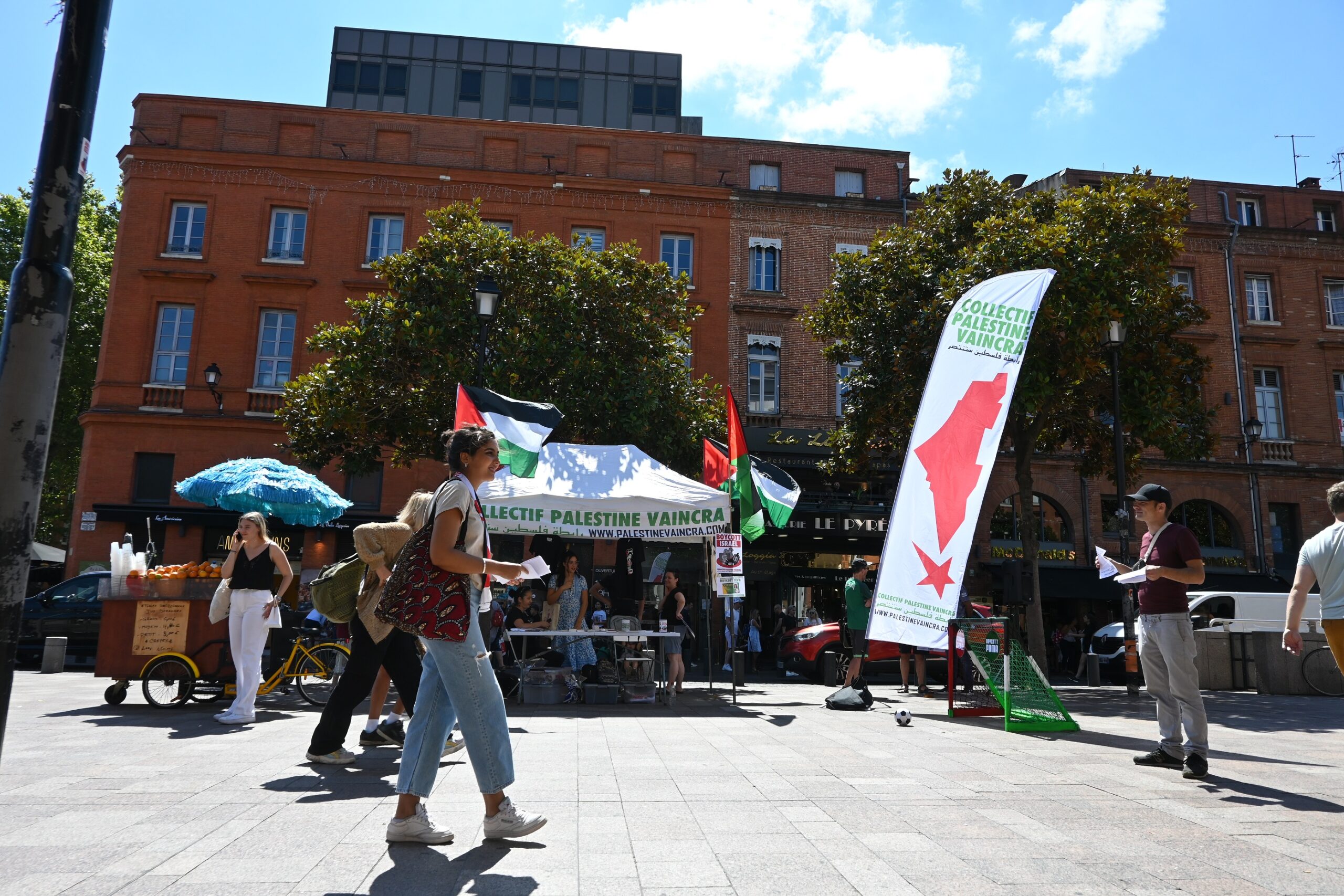 Many people visited the stand to ask for more information, pick up flyers and stickers or get a leaflet with a list of Israeli and international products to boycott in support of the Palestinian people. The stand displayed a large banner presenting the international campaign to boycott Israel, the objectives of the campaign and various targets. 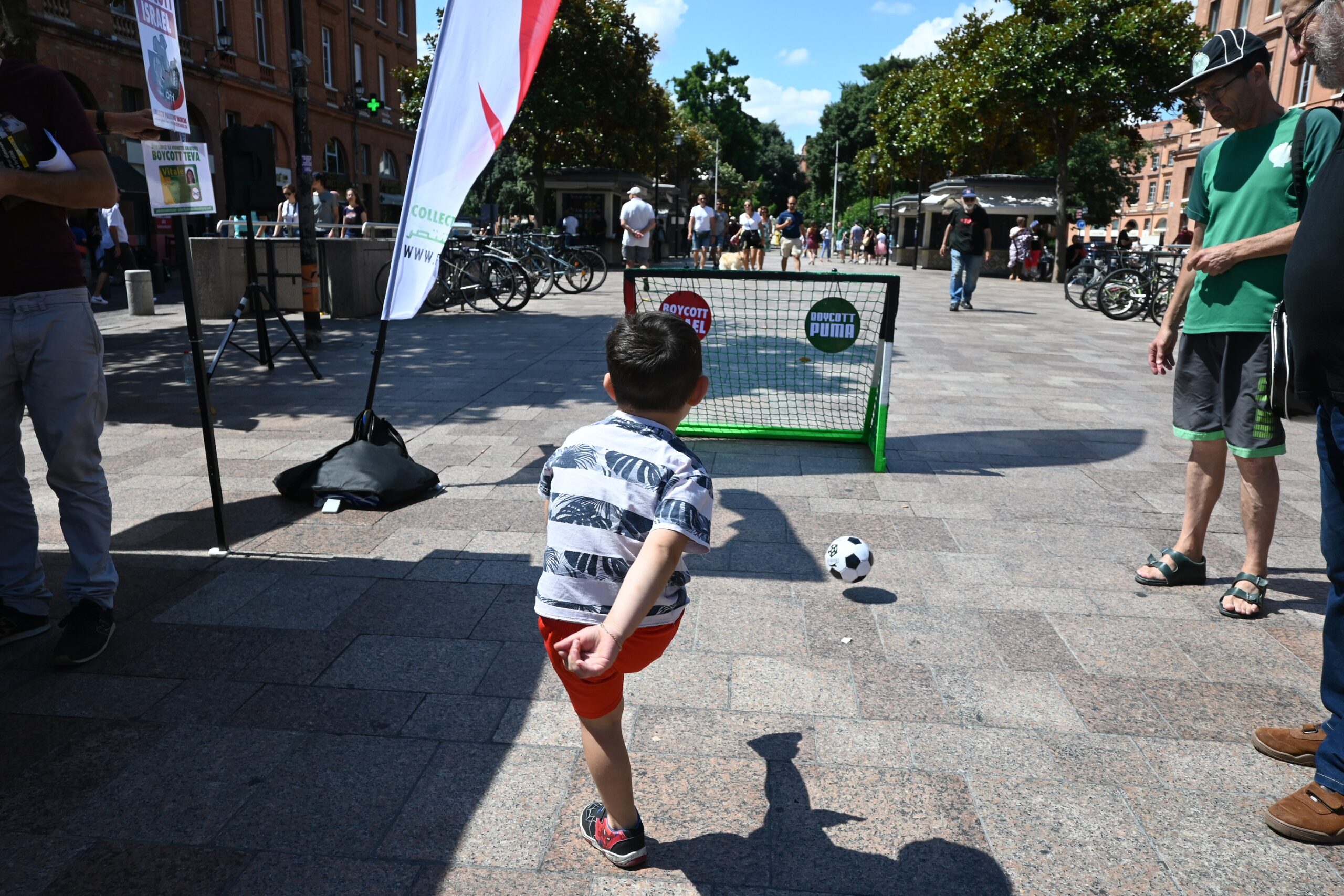 A football goal was set up with “Boycott Israel” and “Boycott Puma” targets, attracting attention from young players. The football goal aim to raise awareness among people of all ages about the importance of anti-colonialist, anti-racist action. 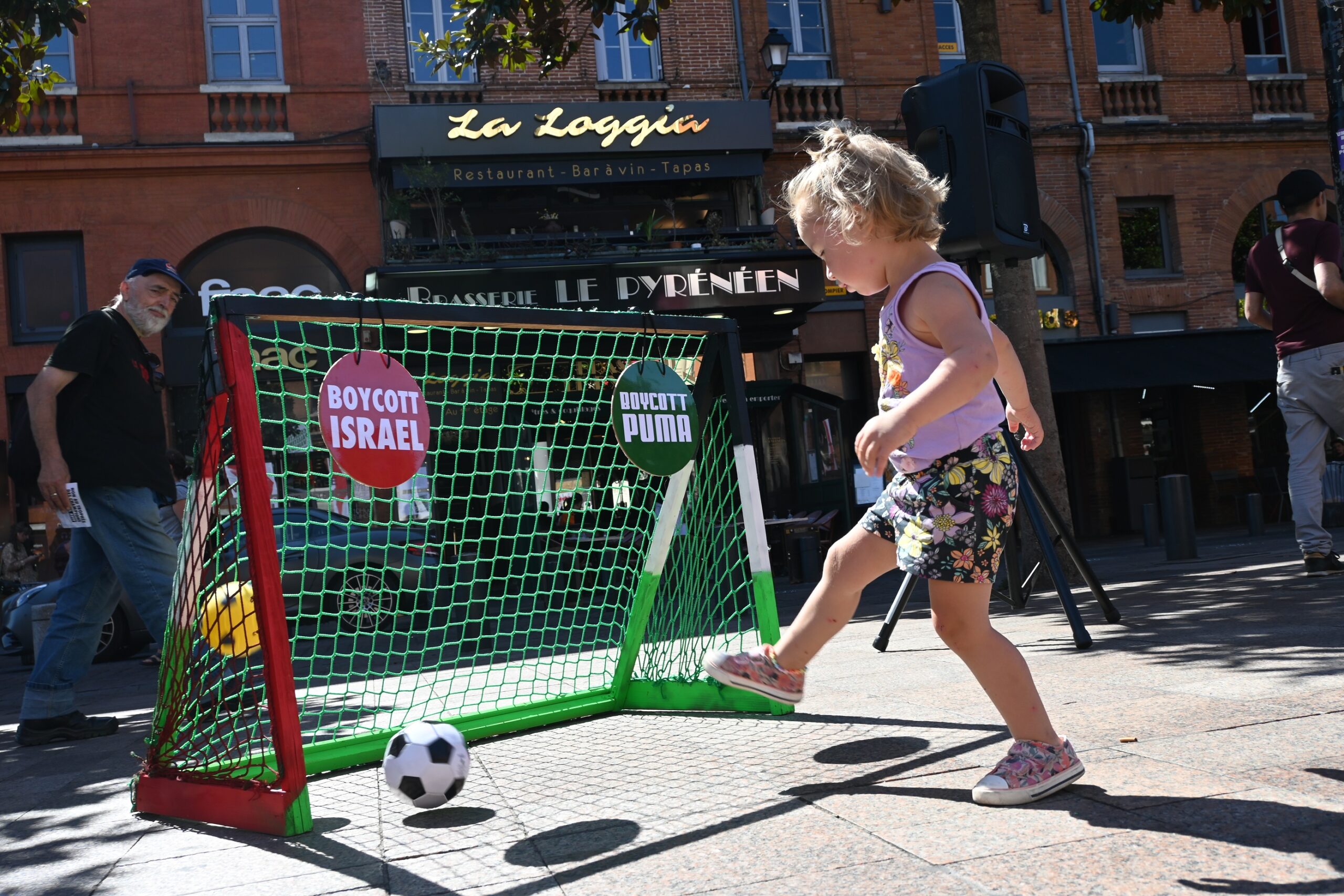 Dozens of people joined in taking solidarity photos supporting the “No to the Champions Trophy in Tel Aviv” campaign, showing that support for Palestine in Toulouse is as lively as ever, despite the summer holidays.

The Collectif Palestine Vaincra regularly organizes information stands and various initiatives to support the Palestinian people in different neighborhoods of Toulouse. Do not hesitate to contact the Collectif if you wish to mobilize in Toulouse and to follow us on our various social networks (Facebook, Twitter, Instagram, TikTok  and  Telegram).