Home News Omar: chased for a quarter of a century by Tariq Asrawi 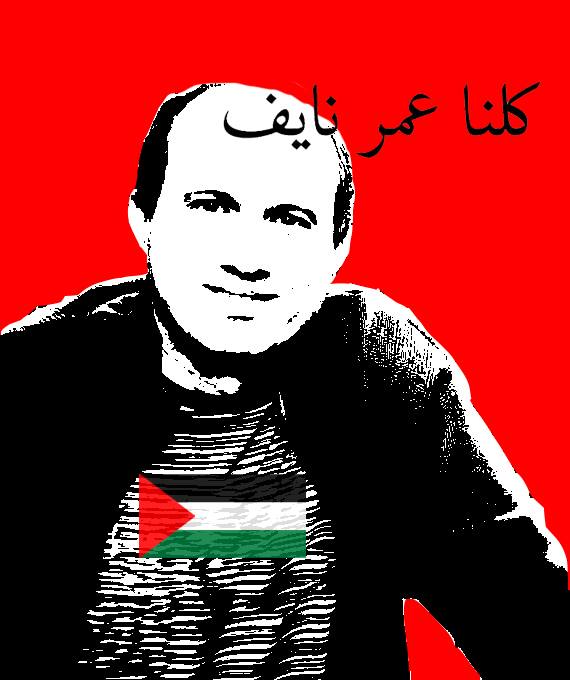 As his name was risen, and lit up the night in our conversations, 25 years ago; here he is returning to the public once again, and once again gives us stories that are full of sorrow and hope for salvation.

The three young men hid, disguised in the dress of the old city of Jerusalem in 1986 before being detained by the Israeli army. The news arrived quickly to Jenin; the city worried from the conflicting reports about the injury of one of the brothers, and the reports came then that Omar, and his brother Hamza Zayed, and their friend Samer Mahroum were accused of carrying out an operation in Jerusalem and were each sentenced to life imprisonment.

I still remember, as military vehicles and soldiers filled Sikka Street, the soldiers stepped out; they do not look like the face of our country. In their eyes, alertness – they were searching in the eyes of the children of the neighborhood and the residents who gathered to watch the momentous event.

That day, a force from the Israeli army came to seal the home of the children of our neighborhood with red wax, and when the soldiers left, we went away to understand the meaning of red wax.

When the cinders of this event had begun to dim on the tongues of the people, it flared up again – Omar had inflamed it with water and salt. And the the city was filled with his name: he has escaped from prison, from a life sentence, and disappeared!

His disappearance became a matter of whispers, as if a general certain sense hit the people of the city, who felt they needed to whisper when discussing Omar. I think the vast majority dropped the story from conversation in order to participate in hiding him from the alert eyes of the occupation, looking for the beginning of a thread to turn their guns toward him.

For twenty-five years, Omar stayed there, a shadow of his story, and his brother Hamza and their comrade Samer behind bars.

Hamza, who was deported in the recent prisoner exchange remained, and Samer, who had no sooner been embraced by Marj ibn Amer when the occupation reneged on the agreement, arresting him again and re-imposing his life sentence.

As for Omar, today he has another story, but it is his right to whisper his story that had been deliberately and consciously suppressed.

A story does not require whispers this time, but instead the crack of thunder and a loud voice. After a quarter-century of concealment, the hammer of exile has broken the calcified layers, and the story emerges into the sun.

Omar, who carried out his hunger strike in the deepest circumstances of oppression behind bars until he was taken for treatment, fled in early 1990 from the hospital, and was hidden by the magic hat of the guerilla from the eyes of the occupation, reaching in Bulgaria in 1994. He married, had children and lived under the dome of the cause until his name dried on the tongues of the people.

Just days ago, the occupation requested that the Bulgarian authorities extradite Omar from this life, chasing him for a final injustice, at the hands of the most brutal occupation, with the language of interests and politics that does not bother with Palestinian humanity, nor with the reasons for their struggle, and not interested in the judges who carry weapons stained with the blood of children, who do not remove their military uniforms before issuing rulings against the three young men; despite the subsequent agreements and their annexes, the Bulgarian security are chasing Omar, and so after a quarter of a century, Omar is once again chased. And does the magician of the Fedayeen hide Omar once again, Omar and his story away from the bloody eyes of the occupation?

Or is the idea gotten old, and salvation became impossible?

Or is there, in the story, what remains vague for the days to come to reveal?