Home News Toward a New Year of Freedom: Palestinian political prisoners’ struggles in 2015... 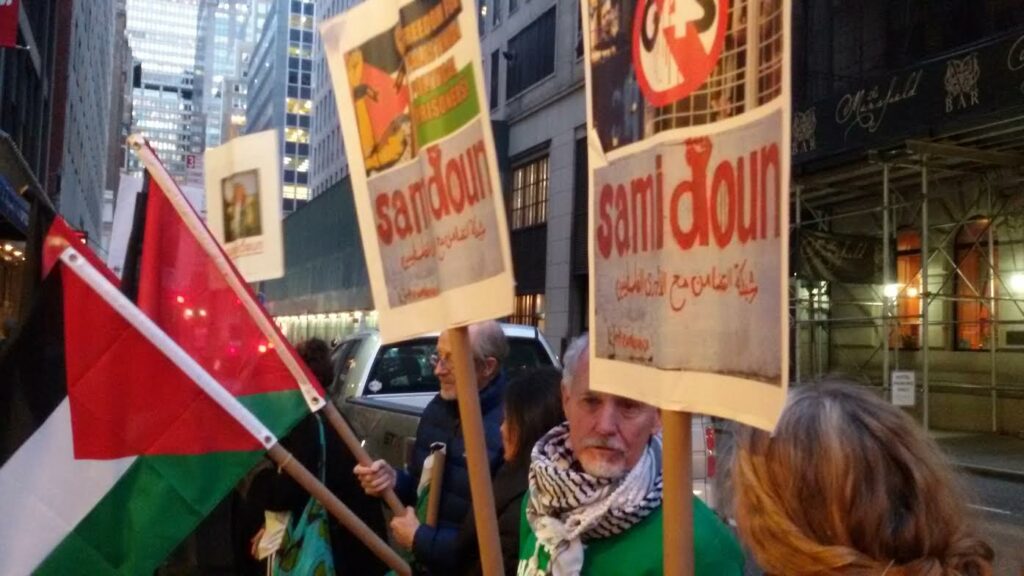 Despite the massive levels of imprisonment already maintained by Israeli colonialism, in the past three months, alongside the new rising intifada led by Palestinian youth, imprisonment has skyrocketed. Mass arrests and violent arrest and assassination raids are a nightly event in towns, villages and refugee camps.

In the past three months alone, 350 administrative detention orders for imprisonment without charge or trial have been issued, and there are approximately 660 Palestinians currently held arbitrarily without trial on no charges at all – including children and Palestinians from occupied Jerusalem and Palestine ’48 (who hold Israeli citizenship).

Palestinian prisoners uniformly suffer from physical and psychological abuse at the hands of Israeli soldiers, captors and interrogators – an experience even more traumatic to the numerous Palestinian children arrested. Arrests of children rose 72% over last year in 2015, traumatizing children through night raids, severe physical injuries, physical abuse, threats of harm to themselves and their families and abusive interrogations.

Amid the upsurge by Palestinian youth, the burgeoning intifada, and the war machine built up against the Palestinian people by the Israeli state – with the full support, military, economic and political – of the United States, it remains critically important to highlight the voices of Palestinian prisoners and struggle for their freedom.

Let 2016 be a year of true liberation, the tearing down of the prison walls for Palestinian prisoners and the entire Palestinian people.

Some of the key events of 2015 – and ongoing struggles of the Palestinian prisoners’ movement: 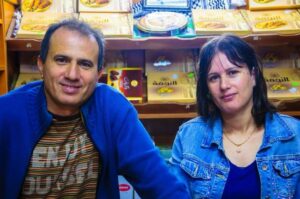 Former Palestinian prisoner Omar Nayef Zayed has been living in Bulgaria for 22 years – after he escaped Israeli detention in 1990. Now, 25 years later, he is being pursued for further torture and imprisonment by the Israeli state, threatened with being ripped away from his wife and children. He has taken sanctuary in the Palestinian embassy in Bulgaria. Omar’s situation is urgent and ongoing: please take action by calling on the Bulgarian government to reject the extradition request, and by calling on the Palestinian embassy to uphold Omar’s sanctuary. Read more..

2. Rasmea Odeh continues to struggle for freedom against U.S. oppression – 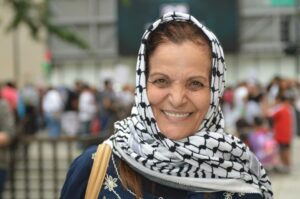 Omar Nayef Zayed is not the only former prisoner facing ongoing targeting and persecution. Rasmea Odeh, Palestinian community leader in Chicago, torture survivor and former Palestinian prisoner in Israeli jails, has faced prosecution and is threatened with prison and deportation in the United States – because of her experience in Israeli prison. She has been convicted on immigration charges and her case is currently under appeal; her case has received wide support from Black leaders and activists, feminists and progressive lawyers. Read more here in the latest update from the Rasmea Defense Committee.

3. Palestinian political leaders under attack: the cases of Khalida Jarrar and Ahmad Sa’adat – 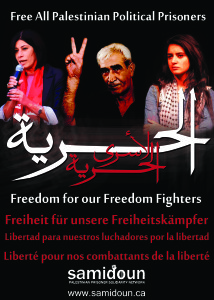 Palestinian political leaders have always been subject to imprisonment, repression and assassination – from the assassination of leaders like Ghassan Kanafani, Ahmad Yassin and Abu Jihad to the imprisonment over the past ten years of dozens of members of the Palestinian Legislative Council. Khalida Jarrar, prominent Palestinian leftist parliamentarian, feminist, and prisoners’ rights advocate, was arrested in an early-morning raid on her home on 2 April. The arrest came after she successfully resisted an Israeli military order in 2014 exiling her to Jericho from her home in Ramallah. First ordered to administrative detention, after an international outcry, Jarrar was charged with public political activity in support of Palestinian prisoners. She was sentenced to 15 months in prison and continues to struggle. The imprisonment of Jarrar as well as political leaders like Marwan Barghouthi, Hassan Yousef and Ahmad Sa’adat highlights the leading role of Palestinian prisoners in the Palestinian liberation movement itself. Imprisoned General Secretary of the Popular Front for the Liberation of Palestine Sa’adat confronted Israeli attacks behind bars in 2015, while issuing calls to the international boycott and solidarity movement and calling for a revolutionary Palestinian future.

4. Battles of Breaking the Chains: The Struggle to End Administrative Detention – 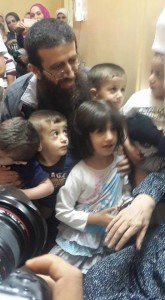 5. Hungry for Freedom: the strike of Muhammad Allan – 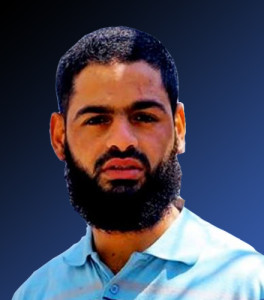 Palestinian lawyer Muhammad Allan launched his hunger strike after an administrative detention order against him was renewed after 6 months of arbitrary imprisonment. He undertook a 60-day hunger strike that nearly took his life – he suffered brain damage and was repeatedly threatened with force-feeding at the hands of Israel’s new force-feeding law. He was transferred from hospital to hospital, as his captors sought to force doctors to force-feed him – a form of torture. His detention was lifted as he remain hospitalized due to his serious medical condition – yet as soon as he was released from hospital, he was re-arrested and his detention without charge re-imposed. He was released on 4 November, victorious over his jailers. 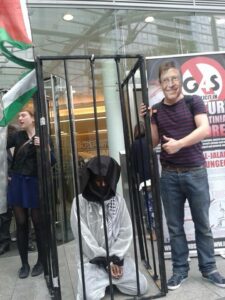 In August 2015, Palestinian prisoners issued a call to boycott G4S, the British-Danish security corporation subject to international campaigns against it for its human rights violations not only in Palestine – where it provides control rooms and security equipment for Israeli prisons and detention centers, checkpoints, police training centers, and the “Erez” Beit Hanoun crossing to Gaza – but in the United States, United Kingdom, Canada, South Africa, Australia and more. Despite G4S’ horrendous human rights record, the United Nations contracts millions of dollars in business annually to G4S. Hundreds of organizations are working to demand an end to the UN’s deals with G4S – while in a victory for Black students, the University of California will divest from G4S as a private prison corporation, and the British Labour Party has dumped G4S as a security provider. The photo at right is one of Inminds’ regular London protests against G4S – while Samidoun protests weekly in New York. The G4S campaign only promises to escalate in 2016. 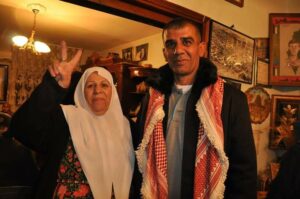 In 2015, over 120 Palestinians, mostly youth, were arrested and charged with “incitement” for their posts on social media, especially facebook. In an attempt to squelch the growing upsurge of Palestinian youth rising up to overthrow the colonial occupation that has defined their lives and existence, the Israeli state has targeted social media expression for surveillance – and violent arrest and repression. Palestinian journalists like Mohammed al-Qeeq, now on hunger strike, Nidal Abu Aker, and 85 more journalists were arrested in 2015 – while 2 were killed and 190 wounded by Israeli occupation forces. There are currently 20 jailed Palestinian journalists. And Palestinian advocates defending prisoners rights – like Ahrar Center, Palestinian Prisoners’ Society, Palestinian Prisoners’ Center for Studies, and Addameer – continue to come in for attacks, raids, and the arrest of their staff.

8. Students on the March – Lina Khattab and the attacks on Palestinian students – 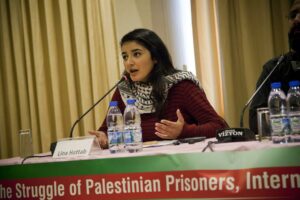 90 Palestinian students just at one university – Bir Zeit – have been arrested in the past several months, including the head of the student union, Saif al-Islam Daghlas, and the student union’s secretary, Asmaa Qadah. Students affiliated to all the major student political blocs in the union have been arrested, including 12 members of the Islamic bloc on one day in December. Israeli occupation forces have erected a military base on the campus of Palestine Technical University Kadoorie in Tulkarem – from which they have shot students with live ammunition. These attacks on students highlight the leading role of Palestinian students in the liberation movement and the current intifada, as did the arrest of Lina Khattab, Bir Zeit student leader and accomplished folkloric dancer, a year ago. Khattab’s arrest drew international solidarity, and she announced that she was planning to study law in order to struggle for Palestinian prisoners when she was released in June. 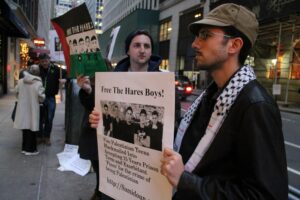 The arrests of Palestinian children escalated 72% over the previous year in 2015, exposing more Palestinian children to violent nighttime military arrest raids, separation from their parents, abusive interrogations and physical and psychological violence at the hands of occupation forces. The case of Ahmad Manasrah is drawing growing international attention – a 13-year-old boy, videotaped shot and bleeding as settlers demand his death, undergoing abusive interrogation, and charged with a stabbing attack. People around the world are calling in demonstrations and on social media to #FreeAhmadManasrah, the boy’s case serving as a symbol of the abuse and imprisonment of Palestinian childhood. Ahmad’s case follows on that of Malaak al-Khatib, the 14-year-old girl who was sentenced to 2 months in prison in January after a New Years’ Eve arrest, and the tragic case of the Hares Boys, 5 young men – minors when arrested and charged – now serving 15-year sentences for a nonexistent “crime.” 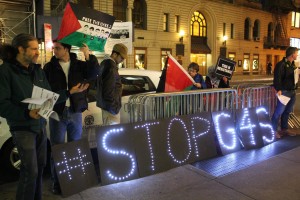 Samidoun Palestinian Prisoner Solidarity Network is engaged in international action and advocacy to support Palestinian political prisoners and demand their freedom – and freedom for all prisoners of occupation, colonialism, and imperialism. With our local chapters and partner groups around the world, Samidoun has organized dozens of demonstrations, educational events, and actions highlighting the demands of Palestinian political prisoners. Tens of thousands of protest letters have been sent through Samidoun’s website in 2015, demanding an end to Israeli imprisonment and persecution of Palestinians. Samidoun’s New York chapter has organized weekly protests outside the offices of G4S, while its Vancouver chapter is co-initiating a Canada-wide G4S boycott campaign. We joined the International League for People’s Struggle in Manila, where Samidoun’s Europe representative was elected to the International Coordinating Committee. We’re working with organizations and movements to support Black, Puerto Rican, Indigenous and other political prisoners in US and imperialist jails – and prisoners for Palestine like Georges Ibrahim Abdallah and the Holy Land Five. We’ve met with and worked with parliamentarians and popular movements to press for change, action and boycott, divestment and sanctions against Israel for its imprisonment of Palestinians. And we’re already planning to escalate the struggle in 2016, to support the Palestinian prisoners – and the Palestinian people – on the front lines of resistance; and we invite you to join us and get involved.

Toward a 2016 of liberation, freedom and justice for all!