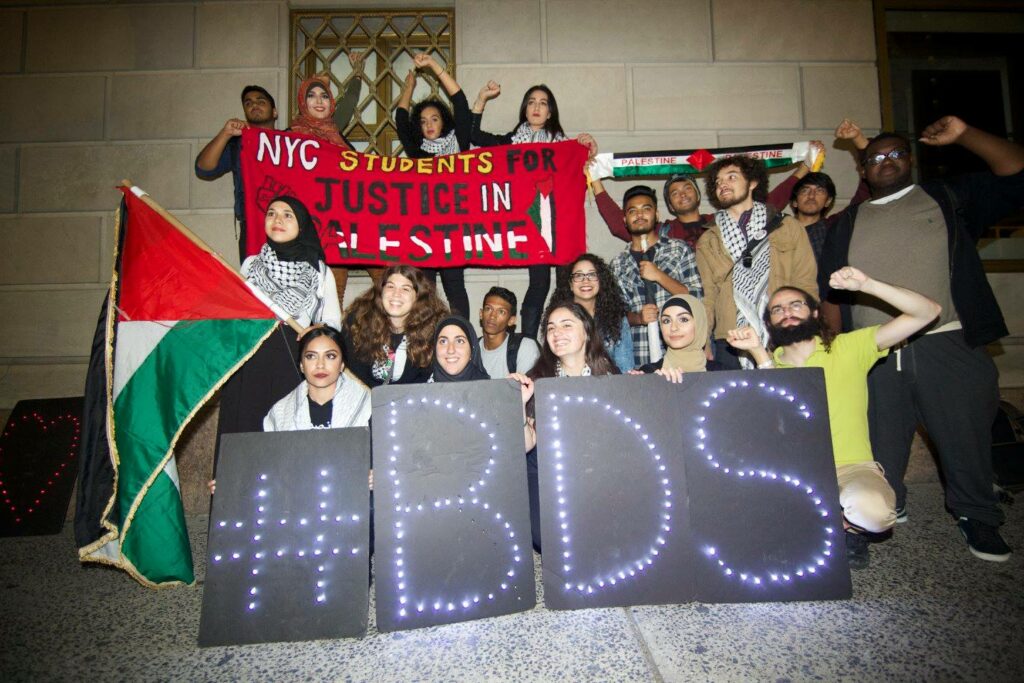 Samidoun has endorsed this petition by the Palestine Solidarity Collective of Syracuse, New York, and encourages all supporters of Palestinian rights to sign and promote it between now and January 10.

What is the bill?

Senate Bill S6086 and Assembly Bill 8220 seek to criminalize political action. If passed, it will create a blacklist–much like what happened under Senator McCarthy–of persons who act in the interest of Palestinian human rights.

The legislation would create “A LIST OF PERSONS IT DETERMINES BOYCOTTS ISRAEL,” and defines boycotting Israel  as “ENGAGING IN ACTIONS THAT ARE POLITICALLY MOTIVATED AND ARE INTENDED TO PENALIZE, INFLICT ECONOMIC HARM ON, OR OTHERWISE LIMIT COMMERCIAL  RELATIONS  WITH THE  STATE  OF  ISRAEL  OR  COMPANIES BASED IN THE STATE OF ISRAEL OR IN TERRITORIES CONTROLLED BY THE STATE OF ISRAEL.”

Who will it affect?

In effect, this law would grant the state the power to coerce those who wish to support Palestinian human rights and the call for Boycott, Divestment, and Sanctions (BDS) by denying them partnerships with state agencies. Once implicated, accused persons would be required to submit a written profession that they are not in fact boycotting Israel. The law will also prohibit the investment of state pension funds in companies that boycott/divest from Israel.

Historically, Boycotts have been an important and constitutionally protected tool for challenging repressive state policies. Examples include:

The bill in question is an attack on the growing movement for Boycott, Divestment and Sanctions (BDS), and if ratified, sets a dangerous precedent that could impact other collective efforts for social justice.

Why BDS?  The real story…

The 2005 call for BDS issued by Palestinian civil society, “calls upon international civil society organizations and people of conscience all over the world to impose broad boycotts and implement divestment initiatives against Israel similar to those applied to South Africa in the apartheid era. We appeal to you to pressure your respective states to impose embargoes and sanctions against Israel. We also invite conscientious Israelis to support this Call, for the sake of justice and genuine peace.”

BDS is Not Anti-semitism

The  Bill conflates BDS with anti-Semitism (conveniently failing to note that many in the US who actively support BDS are themselves Jewish). BDS is not anti-semitism because it targets the expanding and illegal occupation by the state of Israel and its military, which uses disproportionate and illegal forms of violence against Palestinian civilians. The Bill advances a willfully skewed version of reality, and seeks to impose repressive measures in order to advance a narrow political agenda.

We, the undersigned, stand opposed to both Senate Bill S6086 and Assembly Bill 8220, and urge others not to be fooled by this attack on a non-violent popular movement to bring about justice and equality in Palestine.

This statement, with signatories, will be sent to members of the subcommittee considering the bill by January 10, 2016.

Organizations and groups that support this letter include:

Global actions against Israeli annexation and to defend Palestine: Endorse the call and add your event

Take action: Endorse and join the 1 July mobilization against Israeli annexation of the occupied West Bank