The following report was issued on 1 February 2016 by three prisoners’ organizations in Palestine, the Palestinian Prisoners’ Society,  Addameer Prisoner Support and Human Rights Association, and the Prisoners and Ex-Prisoners Affairs Committee. The Arabic original is available at Addameer’s website. Abdul Nasser Ferwana, a Palestinian researcher, has noted that in addition to the report compiled here, 11 Palestinians from the Gaza Strip were arrested in January 2016, including 6 Palestinian fishers seized by occupation forces while fishing in the sea in Gaza: 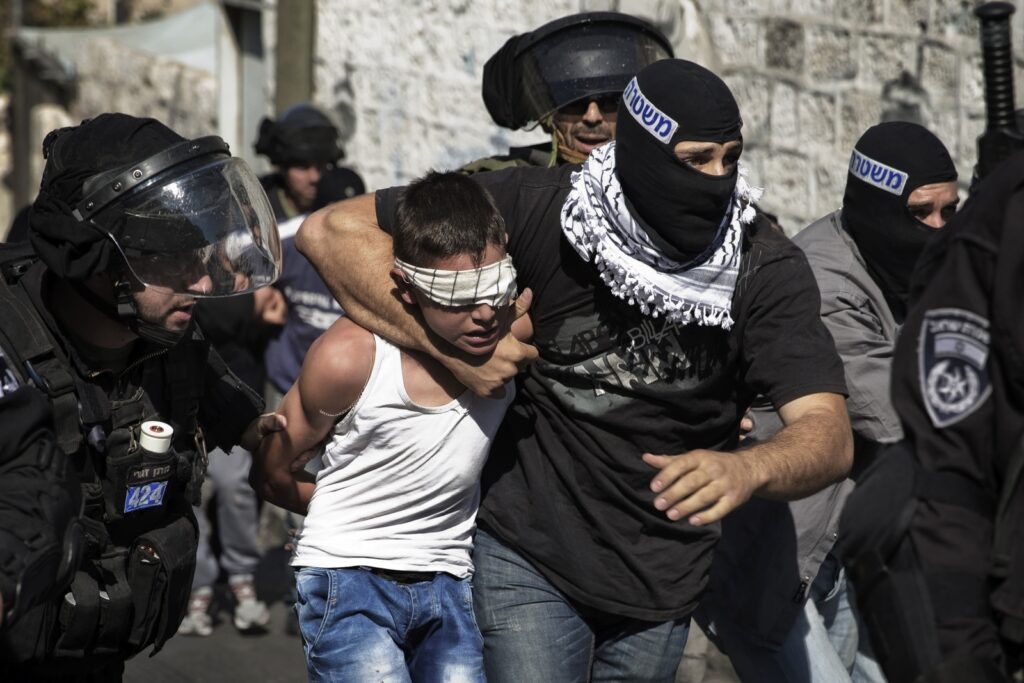 In a joint report, the Palestinian Prisoners Society, Addameer Prisoner Support and Human Rights Association, and the Prisoners and Ex-Prisoners Affairs Committee reported that 551 Palestinians were arrested during the month of January 2016, including 131 children and six women and girls. There have now been over 3500 arrests since October 2015 and the beginning of the popular upsurge.

In January, occupation forces arrested Palestinian Legislative Council deputies Hatem Qufeisha and Mohammed Abu Teir, as well as former minister Issa al-Jabari, raising the number of PLC members jailed to 7. This comes in addition to the arrest of journalists Mujahed al-Saadi and Mahmoud Qawasmi, as well as the arrest of seven university students.

There are 54 women prisoners, including 8 minor girls, all of whom are held in Damon and HaSharon prisons. There are now 450 children and youth under 18 detained in three prisons, Megiddo, HaSharon and Ofer.

The occupation authorities issued 118 administrative detention orders without charge or trial in January 2016, including 56 new orders, including those against Asmaa Qadah, a university student, PLC member Hatem Qufeisha and former minister Issa al-Jabari.

Journalist Mohammed al-Qeeq, held in administrative detention, conducted an ongoing open hunger strike in protest of his administrative detention since 25 November 2015. He refuses medical tests and any vitamins or supplements and has ingested only water since the beginning of his strike. Al-Qeeq was subjected to forced treatment on the 47th day of his hunger strike and his health has recently reached an extremely dangerous state. He has lost the ability to speak altogether, and his hearing has declined by 60% in addition to suffering from severe muscle pain and increased redness in the eyes. A petition was presented in his case to the Supreme Court of the occupation, which decided to stay any decision pending reports on his health.

A number of prisoners conducted individual hunger strikes in protest about various issues, including Kifah Hattab of Tulkarem, who carried out a hunger strike for 50 days to demand recognition as a prisoner of war, and suspended the strike with some agreements on his rights as a prisoner. Jordanian prisoner Abdullah Abu Jaber conducted a strike for 75 days, demanding to be transferred to Jordan for the remainder of his sentence or to hold a hearing to consider a request for a reduction of his sentence. He suspended the strike following assurances given about his case.

Shadi Matawi conducted a hunger strike for 28 days to be transferred from isolation, and Wissam Heimouni for several days to demand his transfer. The Jordanian prisoner Akram Zahra has been striking since 23 January in protest against the continuation of his detention despite the end of his sentence on 15 January.

The Israeli prison management continued to practice repressive policies against the rights of Palestinian prisoners, especially the repeated night-time raids and inspections, especially in the prisons of Nafha, Ramon, Eshel, Megiddo and the Naqab, and the ongoing practice of isolation as a punishment, the imposation of fines, the denial of family visits with prisoners, and the confiscation of rights achieved by the prisoners through years of struggle. This includes the denial of the introduction of books into the prisons, as well as denying them the right to bring clothes or blankets into the prison, and the refusal to give warm clothes or blankets to new prisoners arrested in the cold.

Since the outbreak of the Palestinian popular upsurge in the month of October 2015, about 40 prisoners have been injured with live ammunition and rubber-coated metal bullets while being detained, and were taken to hospitals by occupation forces. During this month, the suffering of some of the wounded increased after the prison administration transferred them from hospitals to prisons despite their poor health status. This includes the cases of Israa Djabis, Helwa Hamamrah and Abla al-Aedam, as well as Miqdad al-Hih, Mohammed Shalaldeh, Azmi Nafaa and Ziad Ashqar.

The Israeli prison administration continues the practice of medical negligence and delay in the privision of proper treatment to sick prisoners, and during January there were a number of cases of health conditions exacerbated by this policy, most notably the cases of Nahid al-Aqra, who is denied a wheelchair in Gilboa prison despite his leg being amputated; Alaa al-Hams, who is suffering from nerve injuries, trembling hands and lymph swelling six years after a treatment for tuberculosis administered in the prison by occupation doctors; and Riad Amour, who says that his medical records have been falsified to claim that he received a new pacemaker a year ago when he has been waiting for this surgery for over four years.

15 Palestinian prisoners are being isolated by occupation authorities and the Shin Bet under the pretext of “security reasons,” including Mohammed Naifeh Abu Rabia of Tulkarem and Majid al-Ja’abat from Jerusalem. Israeli prison administratoes promised to end Al-Ja’abat’s isolation at the beginning of 2016 after a hunger strike, but it has reneged on that promise.

The prisoners’ institutions hold the occupation forces fully responsible for the deteriorating situation in occupied Palestine; the cause of the deteriorating situation are the practices of the settlers and occupation forces, especially the provocative attacks on Al-Aqsa Mosque and Palestinian holy sites, in addition to the daily violations of Palestinian rights and collective punishment against Palestinians, including home demolitions, mass arrests, and the extrajudicial execution of Palestinians, as well as attacks on Palestinians in their homes and workplaces, as well as the continued imprisoment of hunger-striking journalist Mohammed al-Qeeq, on strike for 69 days, and the continued imprisonment of the bodies of 10 martyrs for over 100 days.

They emphasize the right of Palestinian prisoners to obtain recognition of their status as freedom fighters and their rights to health, nutrition and education, to fair trials, to family visits and respect for their human dignity.