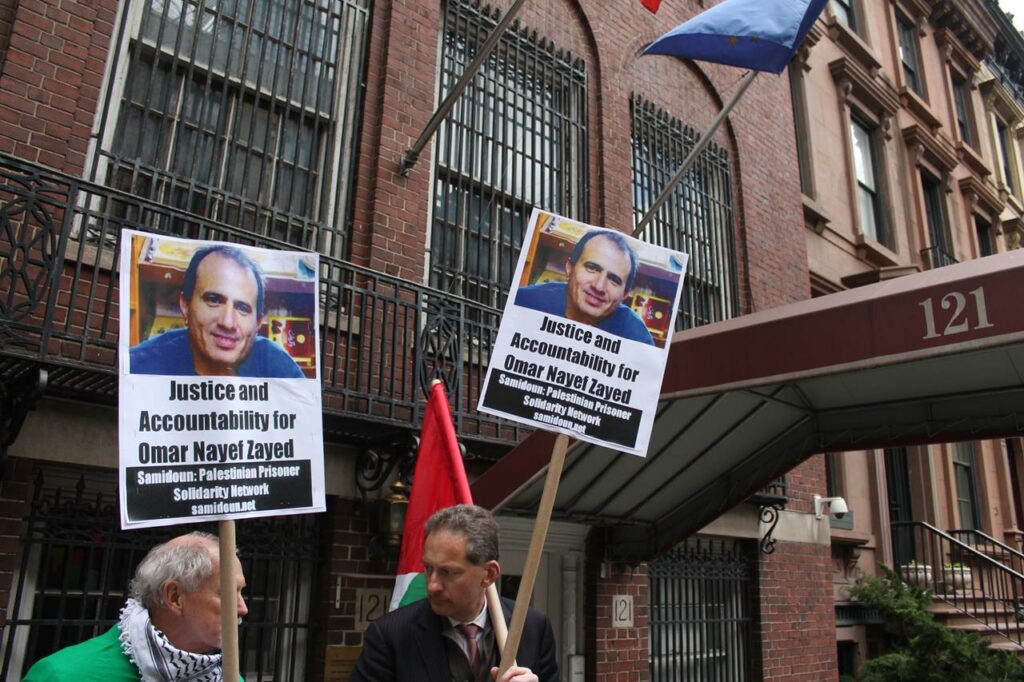 The Global Days of Action for Justice for Omar Nayef Zayed saw events, actions, and memorials take place across Europe and the United States, urging justice, transparency and full accountability for the death of the former Palestinian prisoner whose body was found in the Palestinian Embassy in Sofia, Bulgaria on 26 February. Nayef Zayed, 52, had lived in Bulgaria for 22 years, and was married with three children and active in the Palestinian community. He fled to Bulgaria after escaping Israeli imprisonment after a 40-day hunger strike in 1990. He had been imprisoned as a struggler in the Popular Front for the Liberation of Palestine, accused by Israeli occupation courts of participating in an armed Palestinian resistance action in which an extremist settler in occupied east Jerusalem was killed.

In December 2015, the Israeli state requested that the Bulgarian government arrest and extradite Omar for re-imprisonment in Palestine; with the support of an international campaign, he was taking refuge in the embassy and working on a legal and political defense against extradition on the basis of an unfair trial and unjust conviction by an illegitimate occupation. While in the embassy, he faced constant pressure from Ambassador Ahmad al-Madhbouh and related Palestinian Authority representatives to leave the embassy quickly. His body was found on 26 February, having fallen from a high floor of the embassy. The Bulgarian police and Palestinian investigating commission have announced no results from his autopsy, forensic examinations or the ongoing criminal investigations.

Last week marked the 40th day after Nayef Zayed’s death, a time for commemoration of his life and continuing demands for justice in his case. In response to a Palestinian call to action for 8-9 March, events took place in New York City, Sofia, Hamburg, Berlin, Wuppertal, Copenhagen, and Gaza City urging justice in Nayef Zayed’s case. 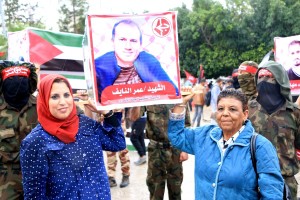 Nayef Zayed’s comrades took to the streets in Gaza City, Palestine on Tuesday, 12 March, for a march and rally commemorating his life and demanding justice in his case; Palestinians carried a mock coffin for Nayef Zayed and demanded accountability from al-Madhbouh and PA Foreign Minister Riyad al-Malki. Linking the death of Nayef Zayed to the PA’s practice of security coordination with the Israeli occupation inside Palestine,  participants demanded real accountability from Palestinian officials on Nayef Zayed’s case. 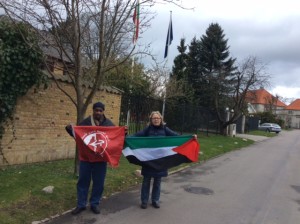 In Copenhagen, Denmark, members of the Internationalt Forum/Middle East Group presented a letter and statement to the Bulgarian Embassy in Denmark  on Friday, 8 April, urging action on the part of the Bulgarians to hold accountable those responsible for Nayef Zayed’s death. The letter of protest accused the Bulgarian authorities of sharing responsibility for the death of Nayef Zayed. “Internationalt Forum/the Middle East Group protests against the lack of protection of Omar Nayef Zayed. The Bulgarian authorities bear a heavy responsibility for the success of his murderers to enter the embassy and kill Omar,” said the letter. 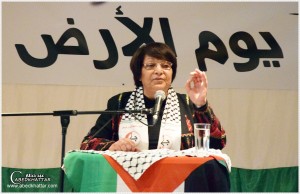 In Wuppertal, Germany, the Coordinating Committee of Palestinian Associations and Institutions organized an event marking Land Day as well as Palestinian Prisoners’ Day on Saturday, 9 April. Keynote speakers Leila Khaled and Abdel-Bari Atwan demanded justice for Omar Nayef Zayed, while former prisoner Naim Mattar delivered a speech on behalf of current and former prisoners, demanding action on the case. Posters of Nayef Zayed adorned the packed hall for the event, which concluded with a performance by the Al-Karmel Folkloric Dance Troupe. 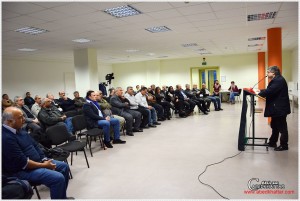 In Berlin, Germany, the Democratic Palestine Committees convened a memorial event and a call for justice in Nayef Zayed’s case on Sunday, 10 April. With the participation of a broad array of Palestinian organizations and political groups, speakers and participants in Berlin recalled Omar’s life, his experience in struggle and inside Israeli prisons, and his work in the Palestinian community in Bulgaria. They expressed their anger at the injustice of his death and demanded that those responsible be exposed and held accountable internationally. 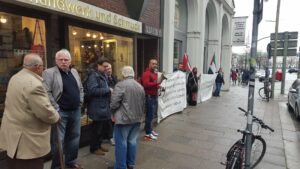 The Democratic Palestine Committees in Hamburg, Germany, protested on Friday, 8 April outside the Bulgarian consulate in the city, carrying banners telling the story of Omar’s life and death and Palestinian flags. Speakers called for justice and accountability for Nayef Zayed and distributed information on the Palestinian struggle and the situation of Palestinian political prisoners. 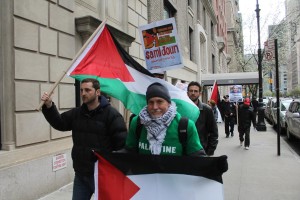 Demonstrators in New York City called for justice for Omar Nayef Zayed on Friday, 8 April. Part of the ongoing weekly protests for freedom and justice for Palestinian political prisoners organized by Samidoun Palestinian Prisoner Solidarity Network in New York City, the demonstration began outside the Bulgarian consulate. Participants carried Palestinian flags and signs demanding justice and accountability in the death of Nayef Zayed, and an immediate transparent and independent investigation into the case. Participants then marched to the Palestinian mission to the UN, where the demonstration continued, calling for justice in Palestine and for Nayef Zayed. 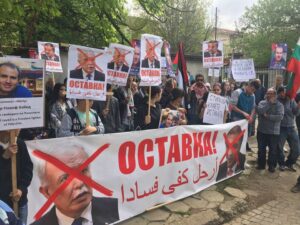 With the participation of Nayef Zayed’s family,  the Palestinian Community in Bulgaria protested outside the Palestinian embassy in Sofia on Friday 8 April, demanding the dismissal of Foreign Minister Riyad al-Malki, and Palestinian ambassador Ahmad al-Madhbouh, as well as the summoning of Madhbouh and other security staff at the embassy for direct questioning and investigation in their role in Nayef Zayed’s death. The demonstration on 8 April followed one three days prior, outside the office of the Bulgarian President in Sofia Community members delivered two letters, to the President and Prime Minister of Bulgaria, calling for intensified investigations and the release of the forensic report and autopsy results in martyr Nayef Zayed’s case.