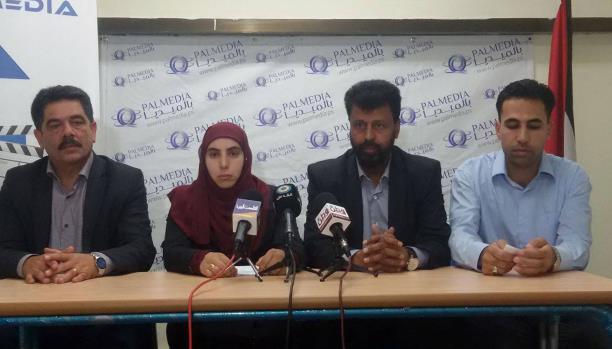 Mafarjah, 28, launched his hunger strike on 3 April alongside Fouad Assi, also from his hometown of Beit Liqya, near Ramallah. Assi ended his strike in an agreement for his future release, but Mafarjah’s strike is continuing. He is held in Barzillai hospital, shackled hand and foot to his hospital bed. In a press conference in Ramallah on Monday, 30 May, Mafarjah’s wife, Aya, joined other family members and advocates to urge international and Palestinian action for his release.

Mafarjah has lost approximately 30 kilograms of weight (approximately 63 pounds) since he began his hunger strike, is vomiting blood, and has lost consciousness; however, Aya reported that he is refusing medications and supplements. She said that he had not received offers to end his strike and that he had been pressured repeatedly through multiple transfers from prison to prison via “Bosta” and long-term solitary confinement.

Speakers at the press conference urged international official actions from United Nations bodies and international governments, as well as support from grassroots groups and civil society, to free Mafarjah and end administrative detention.

Mafarjah is joined on hunger strike by Musallam Eshtayyeh, striking for 32 days against the conditions of his detention; Imad Abu Rezeq, refusing food for the 17th day in protest of torture and mistreatment under interrogation; and Malek Qadi, 19, of Bethlehem, in protest of his re-arrest and torture and mistreatement under interrogation, on his eighth day of hunger strike.

Palestinian activists in Nazareth are holding a protest in support of Mafarjah on Wednesday, 1 June at 5:30 pm, demanding his freedom; a permanent solidarity tent has been erected outside his Beit Liqya home.

Samidoun Palestinian Prisoner Solidarity Network urges people around the world to participate in actions and protests to free Adib Mafarjah and all Palestinian prisoners. Mafarjah is one of nearly 750 Palestinians held without charge or trial under administrative detention. We salute his steadfastness and commitment to win his freedom and that of his fellow imprisoned Palestinians, and urge the amplification of his voice, his struggle and his strike, with demands for freedom for all Palestinian prisoners.