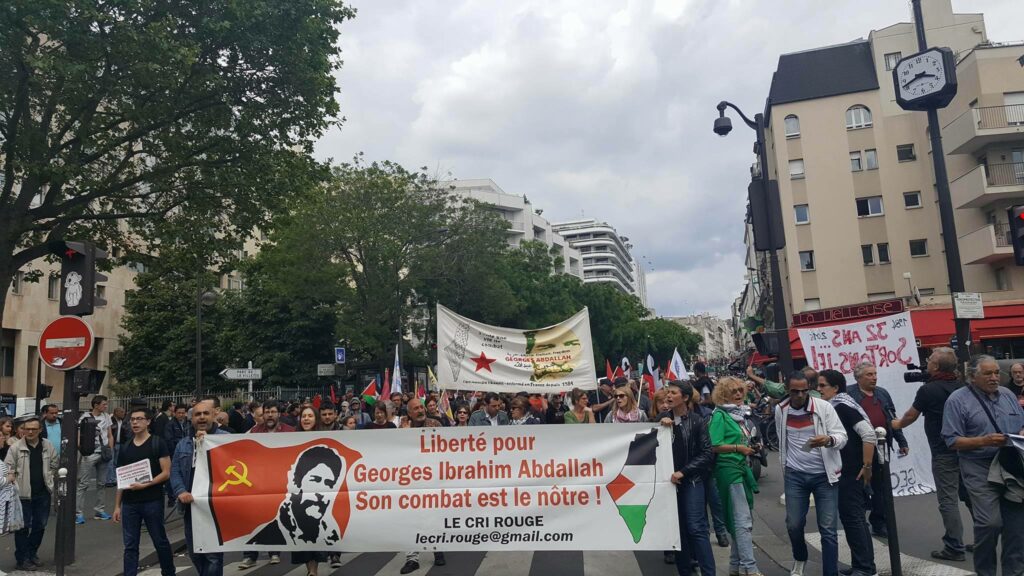 Several hundred people marched in Paris, France on Sunday, 19 June, the International Day for the Freedom of Revolutionary Prisoners, for freedom for Georges Ibrahim Abdallah, the Lebanese Arab struggler for Palestine who has been imprisoned for 32 years in French prisons.

Abdallah, who received a life sentence in 1987, has been eligible for release from prison since 1999. His parole has been approved twice by the judiciary, once at the highest level – only to be blocked by the personal intervention of then-Interior Minister (today Prime Minister, and anti-Palestinian advocate) Manuel Valls, alongside that of then-US Secretary of State (and today presidential candidate) Hillary Clinton. 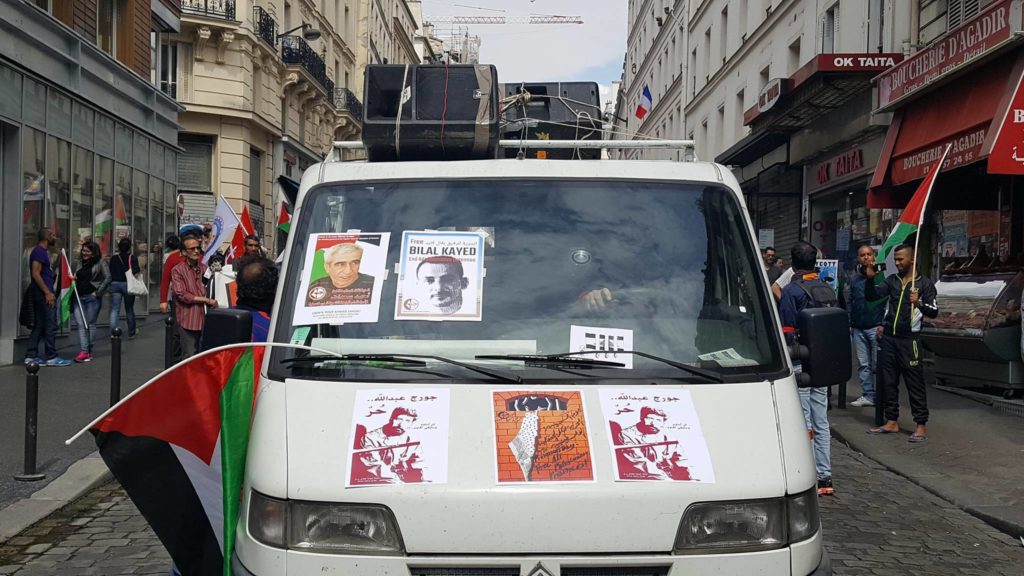 Marching from the Place des Fetes to the Place de la Republique, marchers carried banners demanding freedom for Abdallah, and justice and liberation for Palestine. They highlighted the struggles of all Palestinian prisoners, in particular the cases of Bilal Kayed, now on hunger strike for six days after being ordered to administrative detention immediately following the expiration of his 14.5-year sentence in Israeli prison, and Ahmad Sa’adat, the imprisoned General Secretary of the Popular Front for the Liberation of Palestine.

Chants denounced the French state’s complicity in the ongoing Israeli attacks and crimes against the Palestinian people, and the role of French president Francois Hollande in supporting the imprisonment and oppression of Palestinians, urging the full boycott of the Israeli state and complicit corporations, and calling for freedom for Bilal Kayed, Ahmad Sa’adat and all Palestinian prisoners in Israeli occupation prisons. 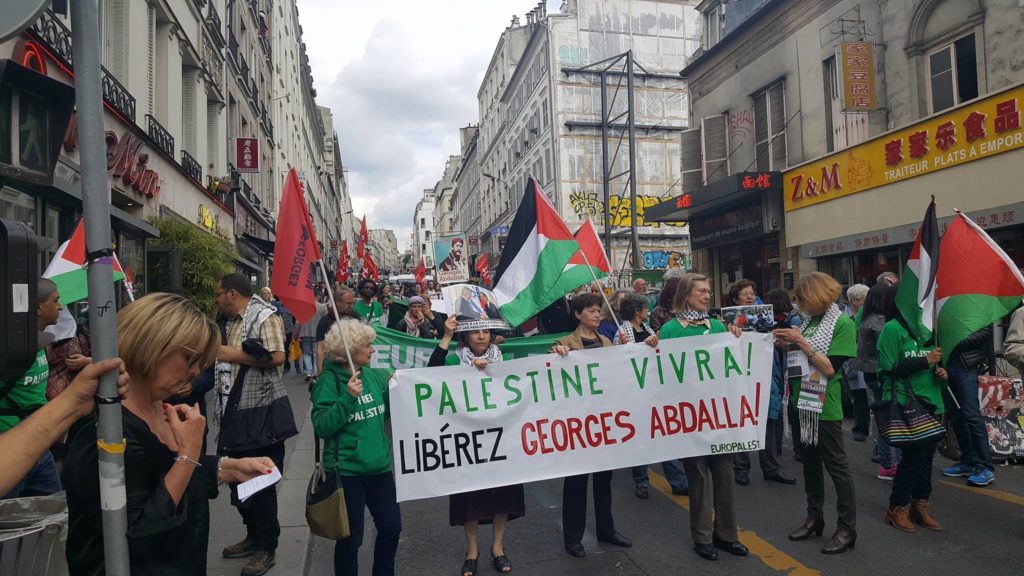 Marchers placed Abdallah in the context of prisoners for Palestine in Israeli jails and other jails around the world, highlighting that Abdallah’s activity was against the Israeli occupation of Lebanon and U.S. support, and that he had always prioritized the liberation of Palestine. Olivia Zemor, president of EuroPalestine, said to AFP that “For us, he is a resistor, like those who struggled against the German occupiers [in France].” 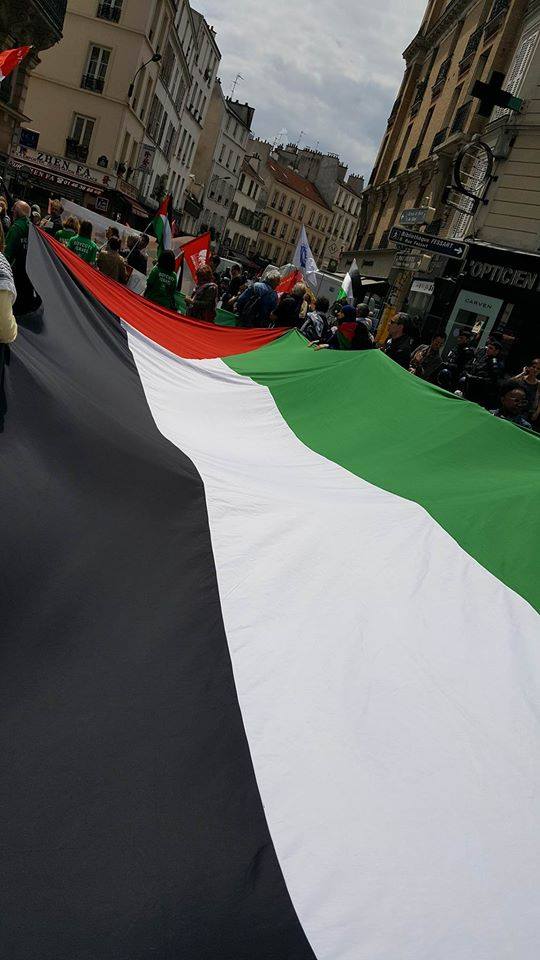 Participating organizations emphasized that they will continue their activities to demand the release of Georges Abdallah and support for the Palestinian cause, particularly the liberation of Palestinian prisoners, and for escalating the BDS movement in France, including supporting BDS activists like those in Toulouse targeted for state repression.

At the same time, the anti-imperialist collective Coup Pour Coup 31 visited with Georges Abdallah in Lannemezan prison in southern France. In the meeting, Abdallah saluted the Paris demonstration as part of the global anti-capitalist and anti-imperialist movement; he also expressed his support for the workers’, youth and student movement against the attempts to impose changes to the Labor Law. Further, he saluted the release of Palestinian leader Khalida Jarrar, urging that the struggle for the release of all Palestinian prisoners must continue and intensify.

These activities also come in the context of protests and actions in various European and international cities in support of justice and freedom for Palestinian prisoners and for Palestine, as well as the upcoming days of action in solidarity with Bilal Kayed, demanding his release and an end to administrative detention.