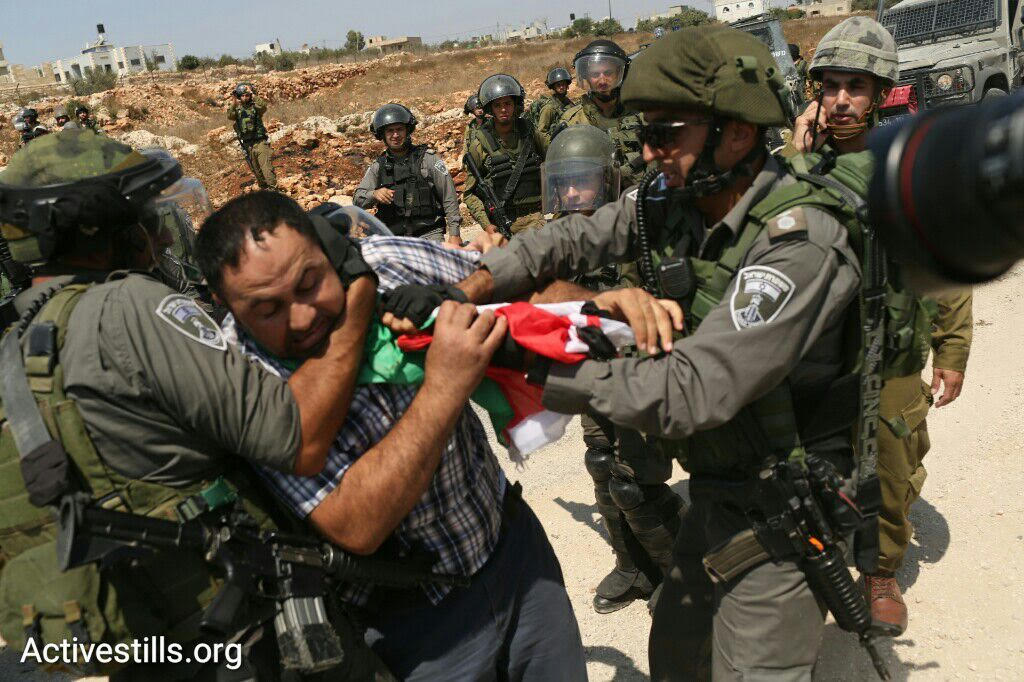 The following summary report on Palestinian prisoners in May 2016 was released by the Palestinian Prisoners’ Society, Addameer Prisoner Support and Human Rights Association, Al-Mezan Center and the Prisoners’ Affairs Committee; Samidoun has translated below.

In May 2016, Israeli occupation forces arrested 471 Palestinians, bringing the number who have been detained since the beginning of the popular uprising in October 2015 to 5805.

The report pointed out that among those detained in May are included 84 children and 15 women, including 5 girls, and the Palestinian Legislative Council member, Abdel-Jaber Fuquha.

The highest number of arrests took place in Jerusalem, where 111 Palestinians were arrested. 80 were arrested in al-Khalil; 60 in Ramallah; 48 in Bethlehem; 45 in Nablus; 34 in Jenin; 24 in Tulkarem; 14 in Qalqilya; 10 in Salfit; five in Tubas; five in Jericho; and 34 from the Gaza Strip.

In the Gaza Strip, the majority of detainees were fishermen and often suffered cruel and degrading treatment during detention and interrogation.

Palestinian prisoners continue to suffer from the use of the “Bosta” for prisoner transport, noting that it is metal, hot in summer and cold in winter and takes an excessive time for transferring prisoners, from eight hours to three days, with the prisoner often detained in vehicles or waiting rooms that lack access to bathrooms or minimum sanitary conditions, before reaching the court or the hospital. For example, Rami Sabarneh of al-Khalil was returned to Ramon prison via Bosta after surgery in an Israeli hospital, leading to injury and bleeding and the reopening of his wound.

Furthermore, the Israeli occupation continues a policy of torture and intimidation against children held in detention and interrogation centers. They are frequently threatened with lengthy detention and with arrest or other harm to family members, or are kept in solitary confinement for a long period. On the other hand, they also suffer physical torture and abuse such as beatings and being handcuffed to the chair in stress positions during interrogation.

In regard to the continued use of administrative detention without charge or trial, the case of Imad Barghouthi must be highlighted. He was arrested on 24 April by occupation forces. His arrest was arbitrary and without evidence, yet he is now facing military courts, which do not represent justice in any way and merely serve to place a legal facade on the decisions of the Israeli security services. Furthermore, the case of Imad Barghouthi underlines that administrative detention is used as a tool of repression, punishment and retaliation, and violating the rights to freedom of expression and opinion.

Palestinian prisoners’ institutions urge international civil society and human rights organizations, political parties, and all forces of justice in the world to work hard to expose the abuses by the occupying forces. They also call upon the United Nations and international community to take actions to stop the grave violations of the rights of Palestinian prisoners, and the violations of human rights and the rights of the child, through arbitrary arrests of children, during interrogation and detention. They also urged action to compel the occupation authorities to respect their legal obligations and the rights of prisoners and detainees to be protected from torture and ill-treatment, to receive health care and family visits. They called for the release of child prisoners, women prisoners, and administrative detainees, struggling for the freedom of all Palestinian prisoners in Israeli jails.