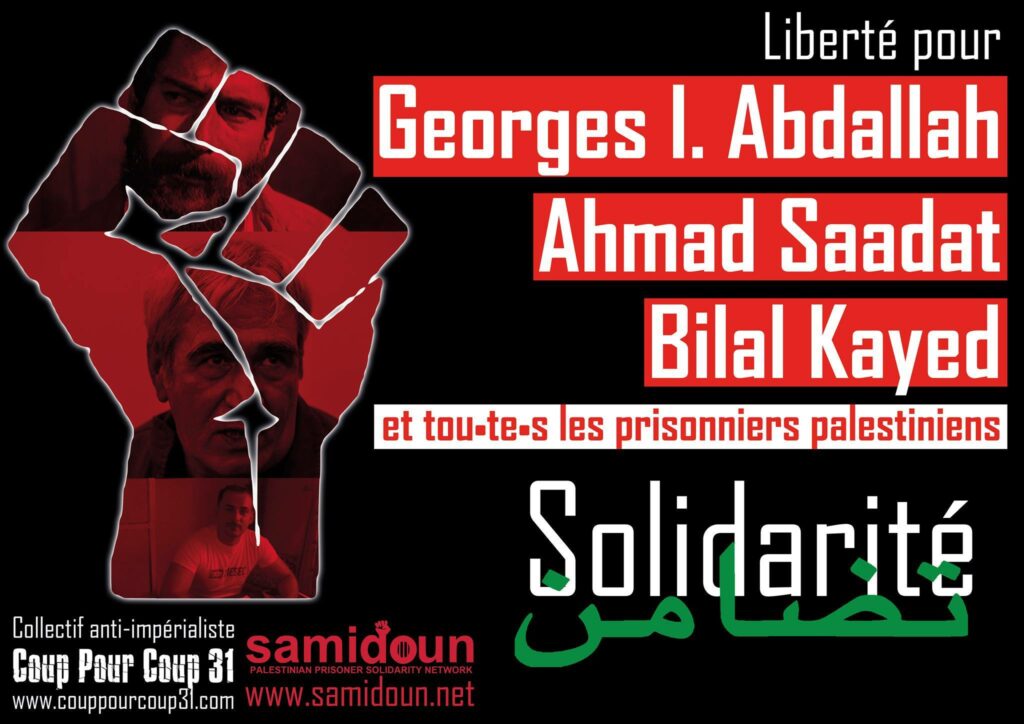 In Paris, Lyon, Douai, Beziers, Poitiers, Chalon sur Saoune, and Metz, protests will be held in seven French cities on Saturday, 20 August in support of hunger-striking Palestinian prisoner Bilal Kayed, on his 67th day of strike on Saturday, and his fellow prisoners. Kayed has been on hunger strike since 15 June and is joined by nearly 100 fellow prisoners refusing food to demand his freedom.

After 14.5 years in Israeli prison, on the day of his release after the full completion of his sentence, 13 June 2016, he was instead ordered to six months’ indefinitely-renewable administrative detention without charge or trial. He immediately launched his strike, supported by his comrades in the Popular Front for the Liberation of Palestine and the broader prisoners’ movement, against this attempt to create a dangerous precedent threatening all Palestinian prisoners nearing the end of their sentences. He is one of 750 Palestinians held in administrative detention and 7000 total prisoners.

CAPJPO-EuroPalestine announced the following protests, all held on Saturday, 20 August:

CHALON SUR SAONE: Gather at 3 pm at the entrance to the Grand Rue

BEZIERS: Gather from 10:30 am – 12 pm at the entry to the théâtre de Béziers (Allées Paul Riquet)

Many Palestinian prisoners are engaged in a hunger strike and 5 face a critical health situation. Israel has even denied legal visits to the hunger strikers. Over 150 Palestinian and international organizations have joined the call to release Bilal Kayed and end administrative detention. The protests will also challenge the new Israeli laws for the imprisonment of children from the age of 12 and the ongoing repression of Palestinian children and youth.