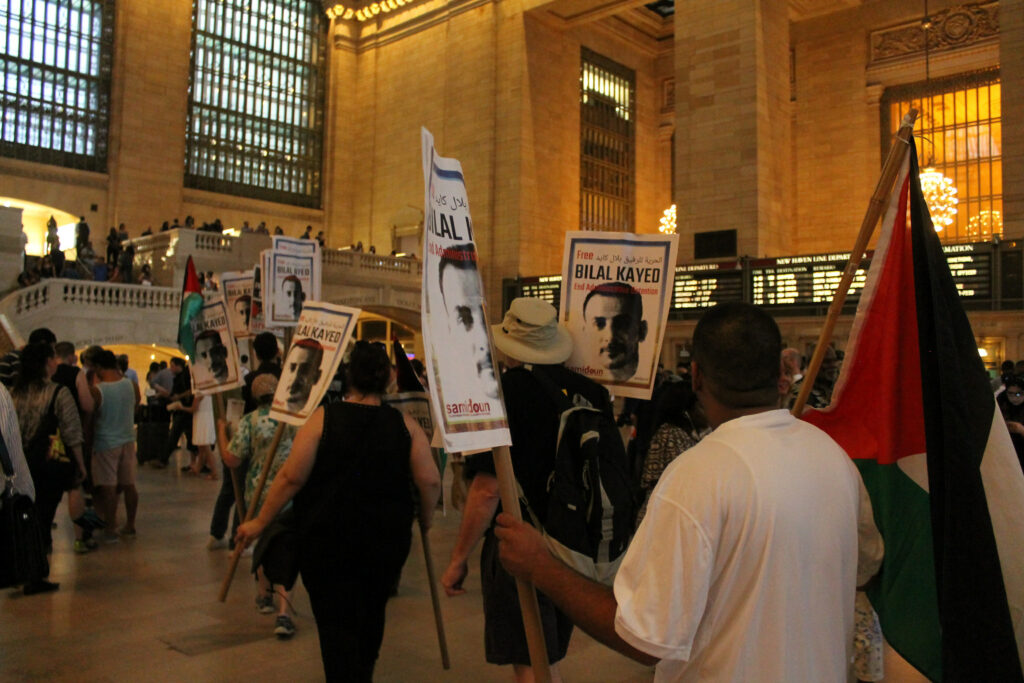 Supporters rallied for Palestinian prisoner Bilal Kayed, an “administrative detainee” on hunger strike against his internment by Israel without charge or trial, before marching through the lobbies of two buildings holding offices of British-Danish security company G4S, a contractor with the Israeli prison system, and Grand Central Station.

New Yorkers marched and rallied on Friday, 12 August in solidarity with Palestinian prisoner Bilal Kayed as he entered his 60th day of hunger strike. Kayed, 34, has been on hunger strike since 15 June against his administrative detention without charge or trial; he was ordered to detention immediately upon the completion of his 14.5-year sentence in Israeli prisons and sent to solitary confinement, where he had spent the prior 9 months. He immediately launched his strike to demand his freedom, and protests around the world have supported his struggle and that of his fellow prisoners, nearly 100 of whom have joined his strike. 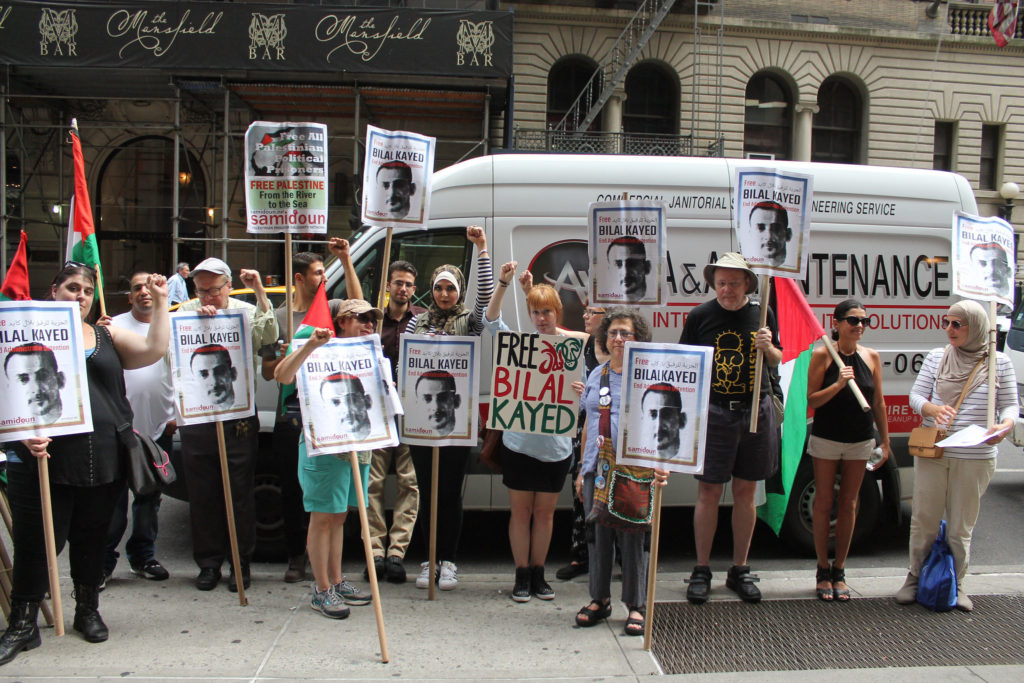 Samidoun Palestinian Prisoner Solidarity Network organizes weekly protests on Friday outside the Manhattan offices of G4S, the British-Danish security conglomerate that contracts with the Israeli state to provide security systems, control rooms and equipment for Israeli prisons, checkpoints and police training centers. G4S is subject to an international boycott campaign for its role in profiting from the imprisonment of Palestinians, as well as youth imprisonment and migrant detention in the US, UK, Canada, Australia and elsewhere. It has pledged to exit its business in Palestine and other “reputationally damaging” businesses; however, Palestinian activists have emphasized the importance of continued protest of G4S. The Boycott National Committee called for intensified protest of G4S to support Kayed and his fellow hunger strikers. 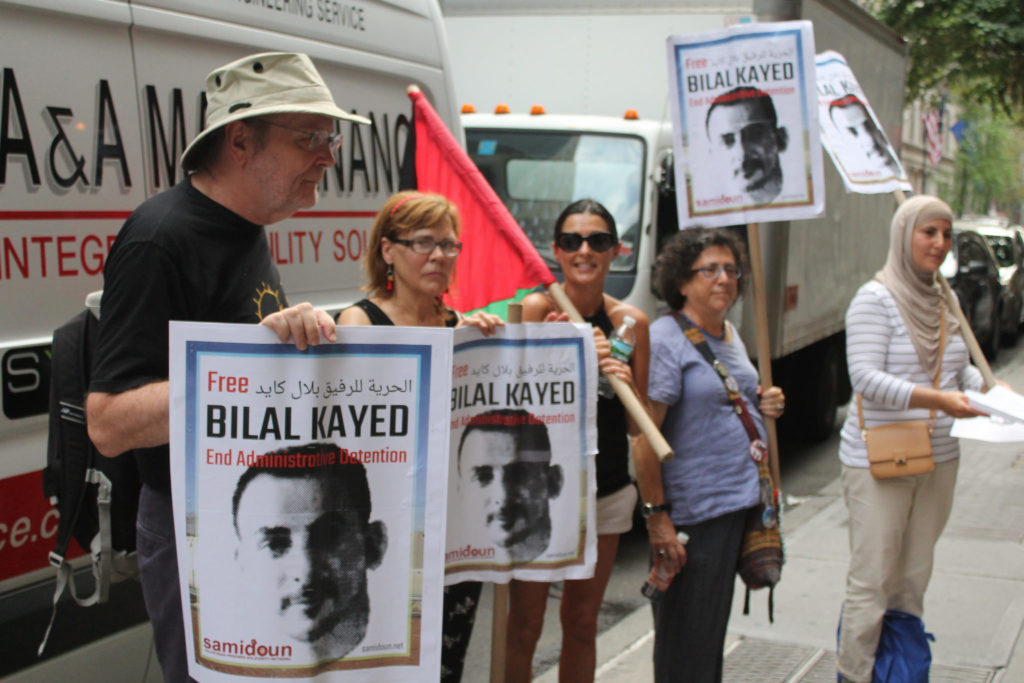 Following the rally outside the G4S office at 19 W. 44th Street in Manhattan, protesters carrying signs for Bilal Kayed and fellow Palestinian prisoners and Palestinian flags marched through the building’s lobby, then through Grand Central Station before arriving at another G4S location at 370 Lexington Avenue, where protesters again entered the lobby of the building to protest and chant, demanding loudly that G4S exit occupied Palestine and calling for the immediate release of Bilal Kayed and all Palestinian prisoners.

Protesters will rally once again in New York City today, 19 August at 4:00 pm at 19 W. 44th Street to demand freedom for Kayed and his fellow Palestinian prisoners as he completes his 66th day of hunger strike, the same day of strike in which Irish hunger striker Bobby Sands died in 1981, and the day of strike in which Khader Adnan won his victory in 2012, as noted by Samidoun organizer Joe Catron. 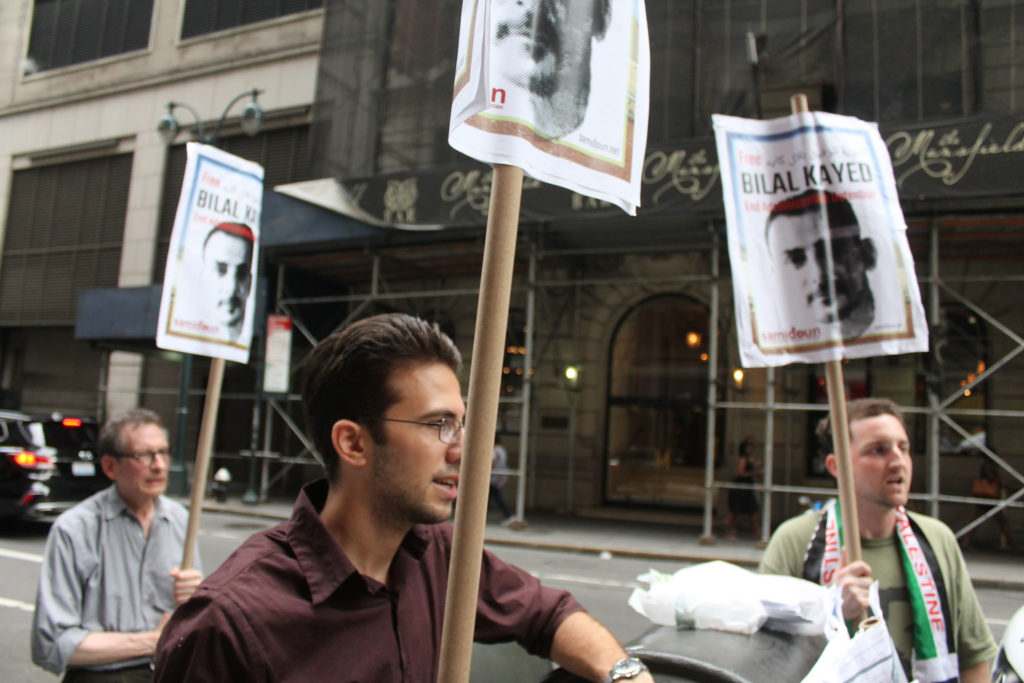