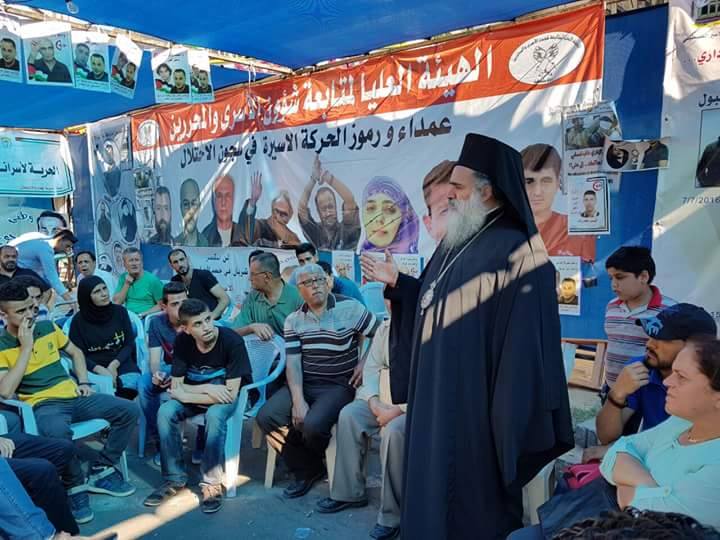 As Bilal Kayed enters his 52nd day of hunger strike shackled to his hospital bed, hundreds of Palestinian prisoners are now on an open hunger strike demanding Kayed’s freedom and an end to administrative detention and repressive attacks on Palestinians in Israeli prisons.

Following a series of raids and attacks on prisoners, mostly affiliated with Hamas, in Nafha prison and the transfer of multiple prisoners throughout the Israeli prison system, over 285 prisoners launched a collective hunger strike on Thursday, 4 August, demanding an end to the assaults and attacks of repressive forces in the prison. Today, 80 prisoners from Ramon prison are joining the collective strike.

They joined over 100 prisoners collectively engaged in an open hunger strike to demand an end to Kayed’s administrative detention. Bilal Kayed was ordered to six months in indefinitely-renewable administrative detention rather than being released on 13 June, after completing a 14.5-year sentence in Israeli prisons. His case represents a dangerous precedent for all Palestinian prisoners threatened with indefinite detention following the expiration of their sentences

Among the prisoners joining the strike in solidarity with Kayed on Thursday, 4 August is Omar Nazzal, the imprisoned member of the general secretariat of the Palestinian Journalists’ Syndicate, held without charge or trial under administrative detention. Nazzal was arrested on 23 April by Israeli occupation forces as he attempted to travel to the European Federation of Journalists’ conference in Sarajevo. Nazzal joines fellow prominent Palestinians engaged in the collective hunger strike, including Ahmad Sa’adat, General Secretary of the Popular Front for the Liberation of Palestine. The circus performer Mohammed Abu Sakha, youth activist Hassan Karajah and former long-term strikers Samer Issawi, Ghassan Zawahreh and Shadi Ma’ali are all participating in the collective protest.

Kayed’s own health is continuing to deteriorate in Barzilai hospital, as he rejects all medical tests and examinations. He has consumed only water with small amounts of sugar and salt and a B1 vitamin only, which is a therapeutic substance and not a nutritional item or supplement, reported Addameer lawyer Farah Bayadsi after a visit with Kayed in the hospital on Thursday, 4 August.

Kayed was transferred to another room in the same hospital with four other patients, including a patient with an infectious disease. He remains shackled by his right hand and left leg to the hospital bed. He has an electronic bracelet on his hand that is a surveillance device and is surrounded constantly by three prison guards. He has been repeatedly offered chips, nuts and soft drinks and the guards regularly eat in front of him while boasting. He continues to be monitored by cameras and other surveillance devices. He feels headache, stomach pain, nausea, chest pain, kidney pain and jaw pain.

Despite his severe health condition, Kayed thanked his supporters and confirmed that his strike continues “with high spirits and solid will.” Kayed further emphasized the importance of accurate information about his case, noting that any misinformation can help to undermine his strike and increase the pressure upon him; he noted that there are no negotiations for his release at the present time. 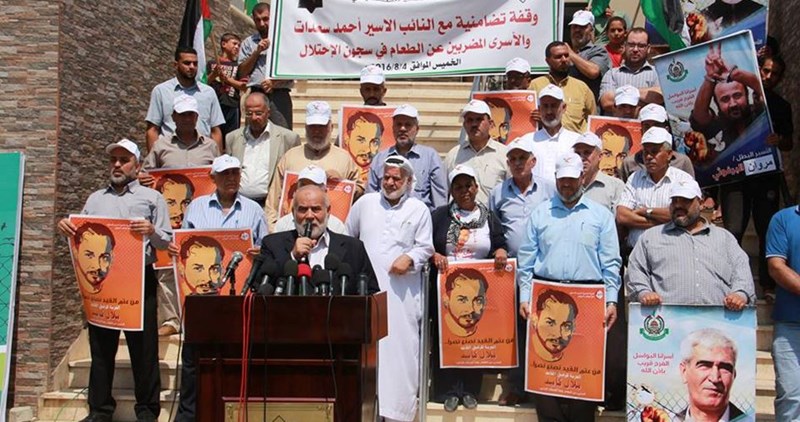 Protests have grown throughout Palestine in support of the strike, with the Palestinian Legislative Council in Gaza holding a solidarity event while protests gathered in Ramallah, where Archbishop Atallah Hanna joined the crowds in the solidarity tent, Nablus, Dheisheh, Khan Younis, Asqelan and elsewhere throughout Palestine.