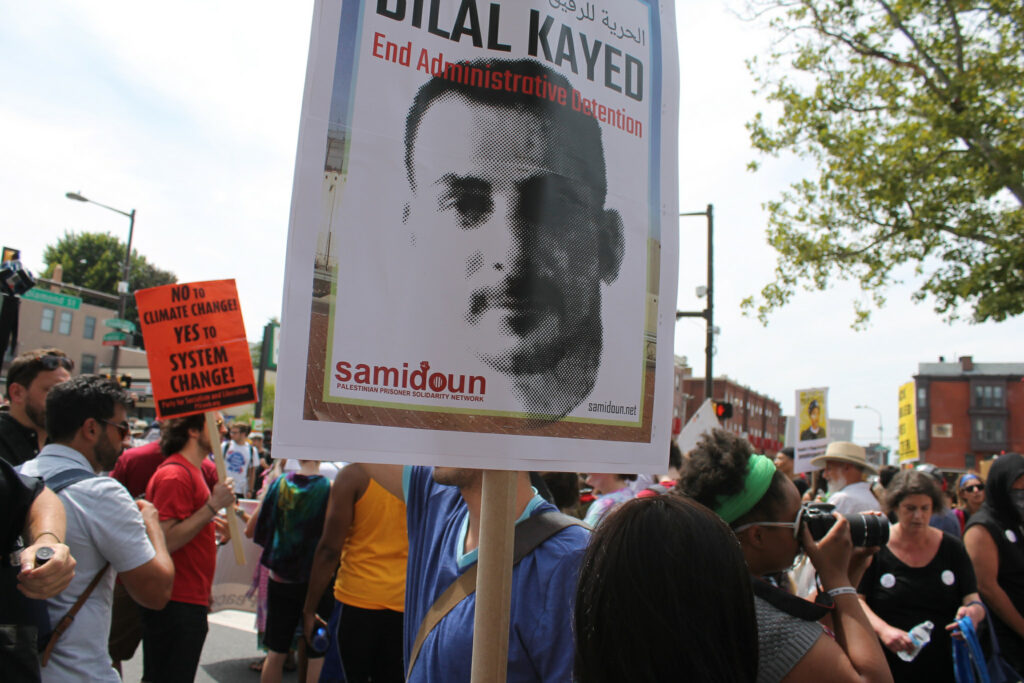 As Bilal Kayed approaches his 50th day of hunger strike, his health is at serious risk at any point, warned Issa Qaraqe of the Prisoners’ Affairs Commission. Kayed, 34, is vulnerable to cerebral hemorrhage, heart attack or stroke due to the physical strain on his body through 49 days of open hunger strike. A Palestinian Ministry of Health delegation was prohibited on Tuesday 2 August from visiting Kayed in the hospital and providing an independent examination.  Raafat Hamdouna of the Palestinian Prisoners Center for Studies joined in the urgent health alert on Kayed’s case, noting he had lost 32 kilos of weight, suffered fainting spells, severe pain and shortness of breath, and urging escalated solidarity efforts to support Kayed and his fellow hunger strikers.

Kayed is currently held, shackled hand and foot to his hospital bed in Barzilai hospital. He is rejecting all medical tests, even the most basic, as well as all food and supplements. He launched his strike on 15 June in protest of his administrative detention, imprisonment without charge or trial. While administrative detention imprisons over 700 Palestinians, many of which have engaged in long-term hunger strikes against the practice, Kayed’s case is different: he was ordered to administrative detention after the expiration of a 14.5 year prison sentence. Thus, his case represents a dangerous precedent of extended and indefinite imprisonment for all Palestinian prisoners.

In a letter from prison released yesterday, Kayed said, “I am demanding my immediate return to prison despite my deteriorating health conditions, to stand in one front and on one line in the prison cells of the occupation, side by side with all of the revolting prisoners, raising our loud voice: Your decision will not pass easily! Especially after the occupation has crossed another red line, even more dangerous, by sending me to administrative detention, which aims to liquidate all of the leaders of the prisoners’ movement and its cadres and those who raise high its banner defending the right of prisoners to freedom and dignity.”

Over 100 fellow Palestinian prisoners are engaged in a collective hunger strike in support of Kayed’s demand for freedom, including Ahmad Sa’adat, the General Secretary of the Popular Front for the Liberation of Palestine, circus performer Mohammed Abu Sakha, youth organizer Hassan Karajah, PFLP leader Ahed Abu Ghoulmeh, former long-term hunger strikers Ghassan Zawahreh and Shadi Ma’ali, and many more. Kayed’s struggle is supported by the Palestinian Prisoners’ Movement, the unified voice of the Palestinian political parties inside Israeli jails. Among 32 prisoners in Gilboa participating in the strike is former long-term hunger striker re-arrested after his release, Samer Issawi, reported lawyer Shirin Iraqi.

An additional group of hunger strikers joined the collective hunger strike today, with names of strikers announced from the Negev desert prison and Nafha prison:

The growing hunger strike has been met with a series of repressive attacks from the Israeli prison administration. Sa’adat was thrown in solitary confinement – he spent three previous years in isolation, sparking repeated protests – while hundreds of prisoners have been put on lockdown, denied family visits, faced invasions and raids on their cells, had electronics and other personal belongings confiscated, and transferred from prison to prison in an attempt to break the growing protest.

The ongoing hunger strike also includes several more administrative detainees striking for their freedom, including the brothers Mohammed and Mahmoud al-Balboul, held without charge or trial and on hunger strike for 29 days, and Ayad Herama and Malik al-Qadi, on strike for 18 days. Mahmoud al-Balboul has been transferred to Ramle prison clinic while Mohammed remains in solitary confinement in Ofer prison despite extreme fatigue and weight loss. Herama fell to the ground several times due to exhaustion during a legal visit. Walid Musalma, serving a life sentence in Israeli jails, is also on hunger strike against his solitary confinement. Herama and al-Qadi are held in solitary confinement in Ofer prison; the Muhja al-Quds Foundation reported that they are being denied fresh water and ordered to drink bath water or other warm water and that their cells are frequently invaded for raids by police dogs. Al-Qadi has faced a six-month order of administrative detention, while Herama’s appeal of his detention will be heard by the military court of appeal in ten days. Al-Qadi has been imprisoned without charge or trial since 22 May. He had been released only 40 days from an earlier four-month detention before being rearrested. Herama has been imprisoned without charge or trial since 23 December 2015.