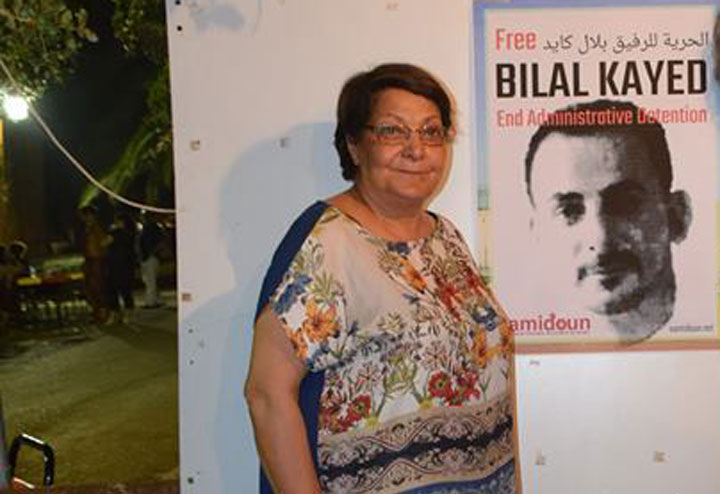 Leila Khaled, the Palestinian resistance icon, spoke with Samidoun Palestinian Prisoner Solidarity Network today to express her urgent concerns and support for Bilal Kayed, Palestinian prisoner on his 56th day of hunger strike. Kayed, 34, a prominent leader of the prisoners’ movement inside Israeli jails, launched his hunger strike on 15 June after he was ordered to administrative detention without charge or trial after completing his 14.5-year sentence. Rather than being released to his waiting family, he was returned to solitary confinement for six months of indefinitely renewable imprisonment.

Kayed’s hunger strike has found widespread Palestinian, Arab and international support. Over 100 Palestinian prisoners have joined a collective hunger strike in support of Kayed, including Popular Front for the Liberation of Palestine General Secretary Ahmad Sa’adat, journalist Omar Nazzal, performer Mohammed Abu Sakha, youth activist Hassan Karajah and many more. Protests have filled streets and tents throughout occupied Palestine to demand Kayed’s freedom, while organizers in cities around the world have rallied and organized for Kayed’s freedom, with further events planned in the next several days.

Leila Khaled spoke in Athens at the Resistance Festival in June, focusing on Bilal Kayed, who had then started his strike only days before. Today, she shared her thoughts about his strike at the present moment:

“Bilal Kayed today is on his 56th day of hunger strike. He is determined to continue his battle for freedom and dignity. It is no longer a case of an ‘individual,'” said Khaled. “Comrade Kayed today is a truthful and genuine representative of the Paletinian prisoners’ movement and he is engaged in this battle based on his deep feeling of the responsibility that lies on his shoulders. This is the battle of administrative detention.”

She continued, “Samidoun and your supporters are well aware of what administrative detention is. It is so important to popularize the campaign to end this unjust law, used in particular against Palestinian youth and against Palestinian leaders, including journalists, for simply posting political opinions on websites or social media. Enough is enough! We must abolish administrative detention, torture, isolation. These are unjust laws that target the Palestinian people and the Palestinian prisoners collectively.” Leila continued, “This does not only affect prisoners themselves but their families and their entire communities.”

She noted the ongoing arrests and targeting of Palestinians throughout occupied Palestine. “Just last night, the occupation forces invaded Dheisheh refugee camp and injured several young men with live fire. Today one young man is threatened with death. They also arrested Nidal Abu Aker, a leader in the camp who was just released last year after his own hunger strike against administrative detention.”

Leila Khaled urged further international action on the case, declaring “I urge all people of conscience to immediately get engaged in whatever capacity they have, including demonstrations, sit-ins, letter writing, phone calls, sending solidarity delegations, because of the urgency of this situation.” She continued, “We also must remember that Bilal Kayed is not the only prisoner who is on hunger strike. Today there are so many Palestinian prisoners backing Bilal and refusing food. It is important also for international institutions to live up to their responsibilities, particularly the International Committee of the Red Cross. I have not seen a word from Human Rights Watch or Amnesty International on this case. No human rights organization that works on the case of Palestine can claim that they are unaware of this case and the hunger strike of Palestinian prisoners.”

Commenting on the international organizing in support of Bilal Kayed, she said, “I have been following the news of the international campaign to free Bilal Kayed being conducted by Samidoun and many friends of Palestine around the world. It gives us strength and a true feeling of international solidarity. I urge all activists and organizations in the BDS movement to intensify their campaigns against G4S and for the boycott of Israel. The Zionists are lying and panicked – your movement is growing and we know that your commitment to Palestine is unshakeable.”

“Of course resisting imprisonment is the task of all revolutionary movements today. We must remember the movement that Georges Ibrahim Abdallah and his comrades in Lannemezan prison are leading in France and elsewhere. We join the call to free Mumia Abu Jamal, the MOVE 9 and all of the revolutionary prisoners. This is a link between the struggles of revolutionary prisoners from the United States to Ireland to France to the Basque country to the Philippines and elsewhere: today Bilal Kayed represents all of these struggles. He must be freed,” concluded Leila.