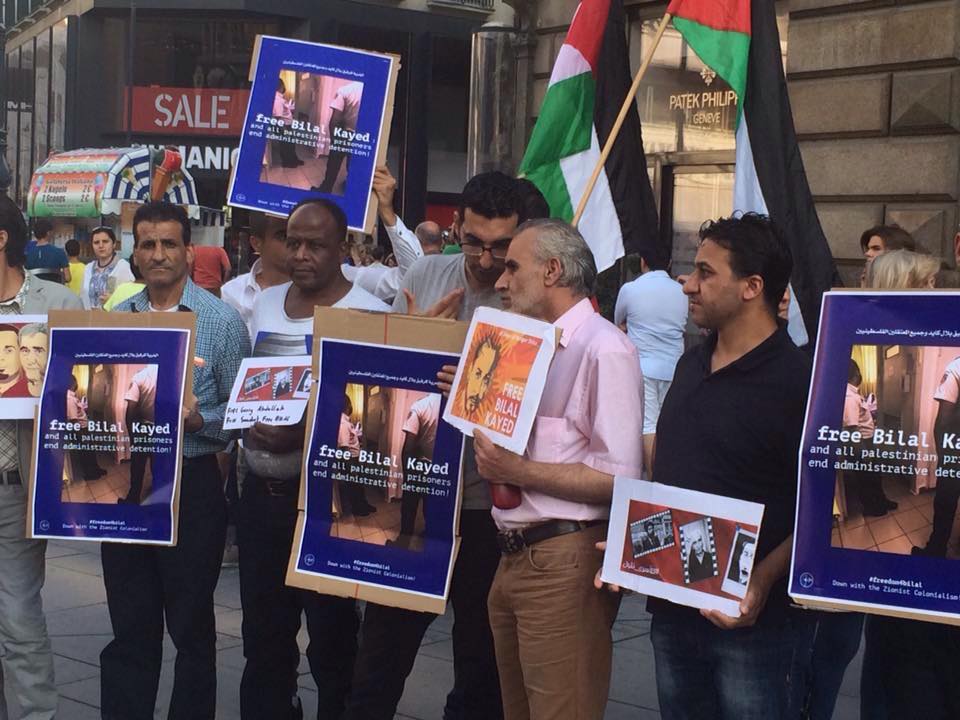 Sufian Fakhri Abdo was arrested by Israeli occupation forces in a dawn raid on his home in the Jabal Mukabber neighborhood in occupied Jerusalem on 19 August, only days after his release from Israeli prison on Monday, reported Ma’an News. Abdo had served 14 years in Israeli prison. 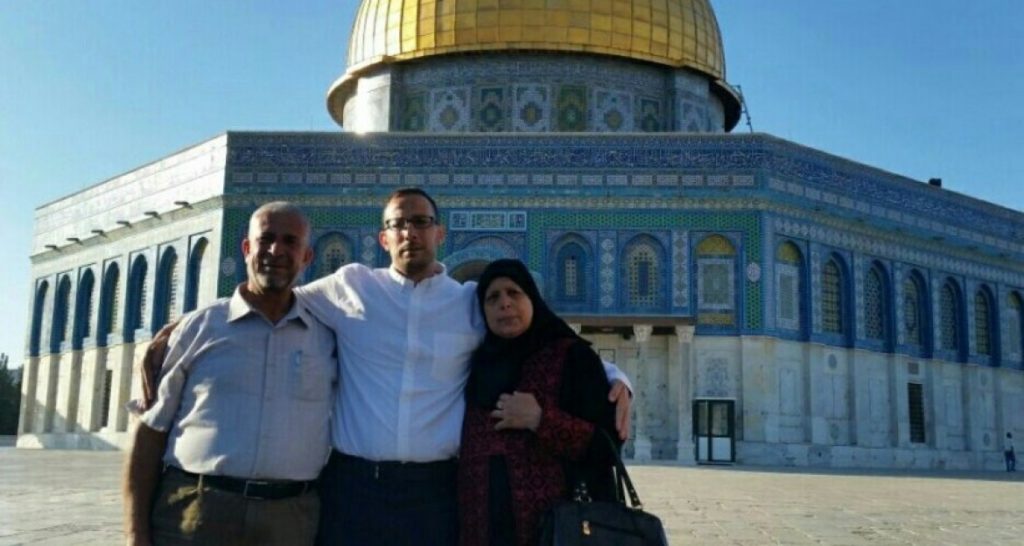 He was transferred to the Moskobiya interrogation center in Jerusalem and will allegedly be charged with “incitement,” a charge that is frequently used to imprison Palestinians for social media activity and other political speech.

Bilal Kayed has been on hunger strike for 66 days in protest against his administrative detention without charge or trial, imposed on him upon the expiration of his 14.5-year sentence in Israeli prison. His strike has been joined by nearly 100 fellow prisoners and is supported by the entire Palestinian Prisoners’ Movement, who note that it is a struggle impacting all Palestinian prisoners. His case poses a dangerous precedent of indefinite imprisonment of all Palestinian prisoners following the expiration of their sentences.

Kayed, who is shackled hand and foot to his hospital bed and facing serious health deterioration after 66 days of strike in Barzilai Hospital, will face an Israeli Supreme Court hearing on his administrative detention on Monday, 22 August, moved from October following an appeal by his lawyers with Addameer Prisoner Support and Human Rights Association. Physicians for Human Rights have also appealed the Israeli court’s recent decision allowing his continued shackling and denying him access to an independent physician.

In addition, hunger-striking prisoner Mohammed Balboul was moved from Ofer prison to the Ramla prison clinic after the deterioration of his health after 44 days of hunger strike. He joined his brother Mahmoud, who has been on hunger strike for 47 days. Both Balboul brothers are held without charge or trial under administrative detention. Ayad Herama and Malik al-Qadi, on hunger strike for 36 days against their own administrative detention without charge or trial, were also moved to the Ramle clinic on Thursday and Friday from Ofer prison. All had previously been held in solitary confinement.

Walid Masalma is also on hunger strike for 33 days, in protest against his isolation for over 10 months, and was transferred to Soroka hospital on 16 August.

They are among nearly 100 Palestinian prisoners on hunger strike against administrative detention and in support of Kayed, including imprisoned journalist Omar Nazzal, member of the General Secretariat of the Palestinian Journalists’ Union, held without charge or trial under administrative detention, whose detention was renewed for an additional three months on 19 August. Hunger strikers have been repeatedly attacked by Israeli prison guards or subject to room inspections, isolation and solitary confinement, denial of family visits, prevention of legal visits, denial of recreation, confiscation of personal belongings, and forbidding of canteen (prison store) purchases. 38 striking prisoners in Gilboa had been prohibited from legal visits, kept in extremely hot solitary confinement room, and subjecting them to repeated inspections. Several prisoners were transferred to three prisons in one week.  Prisoners on strike in Ofer prison have also been targeted for harassment and attacks due to their participation in the collective protests. 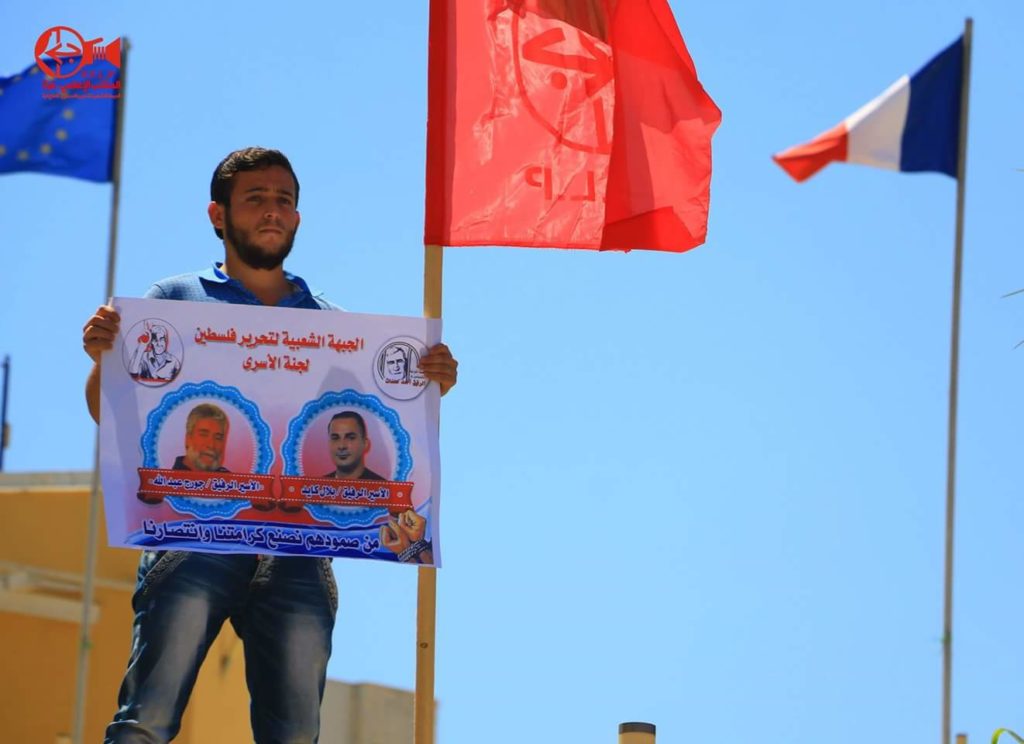 As the protests have grown inside the prisons, so too have protests outside. Throughout Palestine, solidarity tents, sit-ins and protests continue in cities and villages to demand the release of Kayed and his fellow Palestinian prisoners. In Gaza City on 16 August, protesters gathered outside the French Cultural Center to demand the release of Kayed as well as Georges Ibrahim Abdallah, Lebanese Communist struggler for Palestine imprisoned in French prisons for 32 years.  The Progressive Palestinian Youth Union convened the protest alongside the Popular Front for the Liberation of Palestine. Protests in Asqelan, Nablus, Ramallah, Qalqilya, Bethlehem, Haifa, Gaza, Jenin and throughout occupied Palestine have continued to grow. 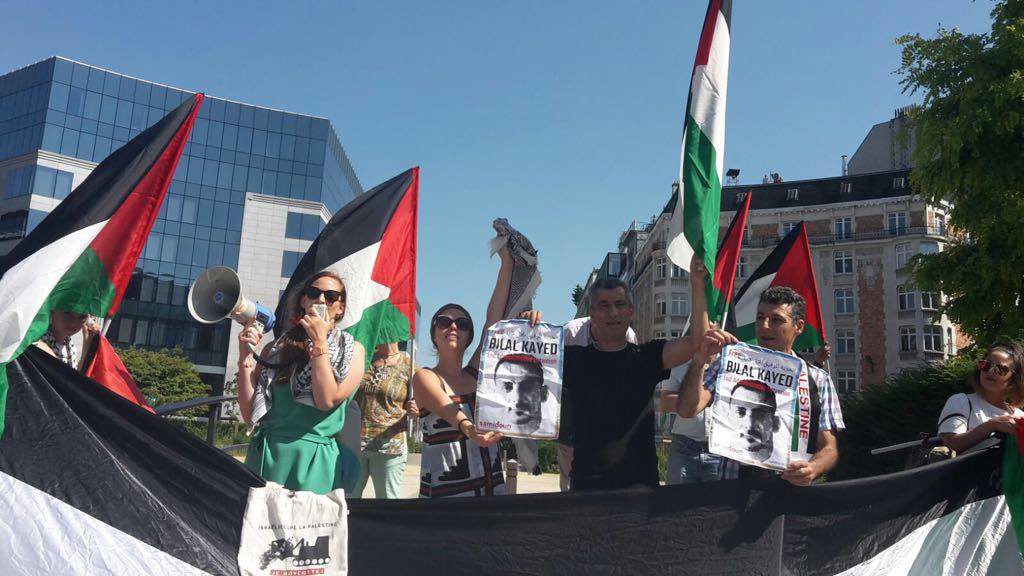 In Brussels, protesters gathered outside the offices of the European Commission on Wednesday, 17 August, demanding freedom for Bilal Kayed and an end to administrative detention. 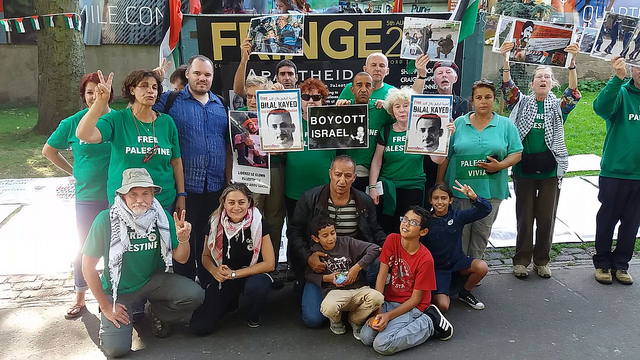 In Edinburgh, BDS Berlin joined with the Scottish Palestine Solidarity Campaign and EuroPalestine to call for a boycott of Israel at the Fringe Festival, highlighting the case of Bilal Kayed in actions and displays. In Manchester, protesters gathered at Piccadilly Gardens for an urgent action in support of Kayed on 17 August, while in Glasgow, Scotland, posters of Bilal Kayed joined Palestinian flags as fans of the Celtics confronted an opposing Israeli football team with massive Palestine solidarity. 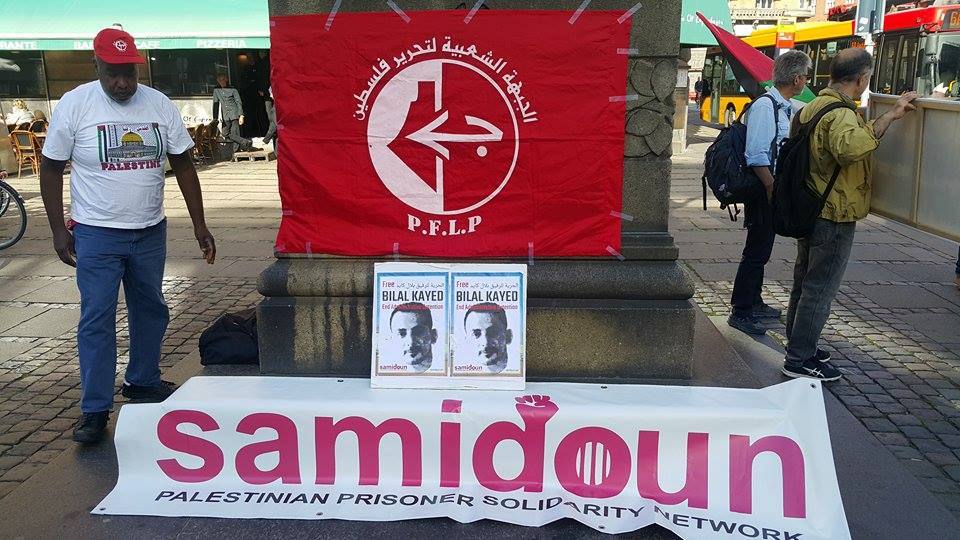 In Copenhagen, the Internationalt Forum’s Middle East Committee organized a protest to support Bilal Kayed; these protests followed one in Vienna on 15 August and numerous events in Ireland, including Dublin, Belfast and Derry, on 13 August. 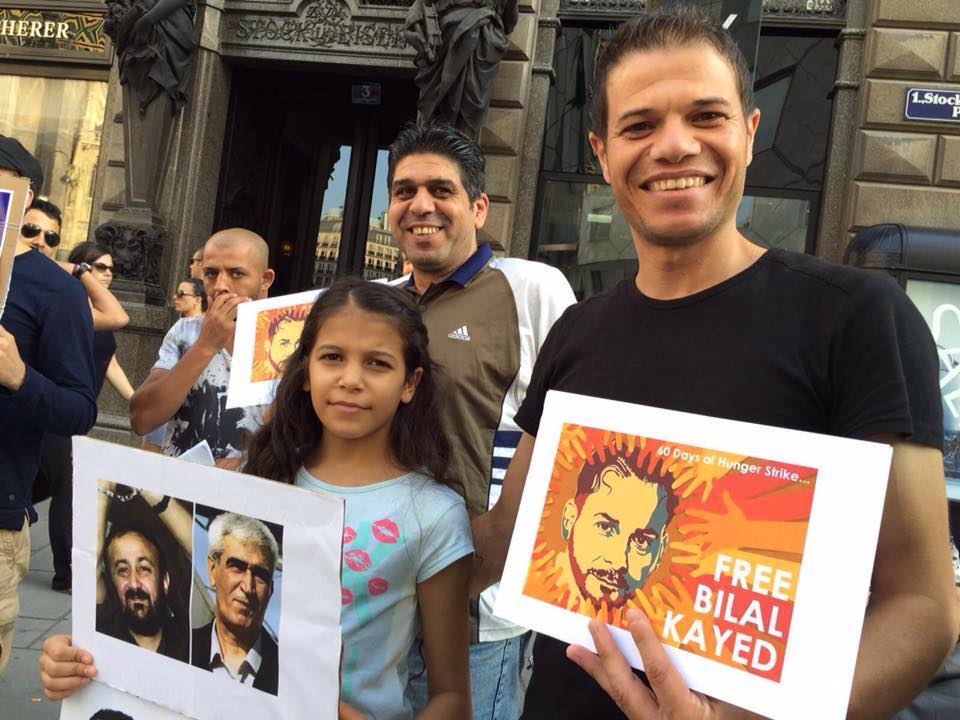 International events, including protests in Helsinki, Dublin, Portadown and seven cities in France, are planned for 20 August, while further protests in Sao Paulo, Belfast, New York, and Barcelona are scheduled throughout the week. In Palestine, activists are planning a human chain in Asira al-Shamaliya for Sunday, 21 August stretching from the village’s municipality building to Kayed’s family home.