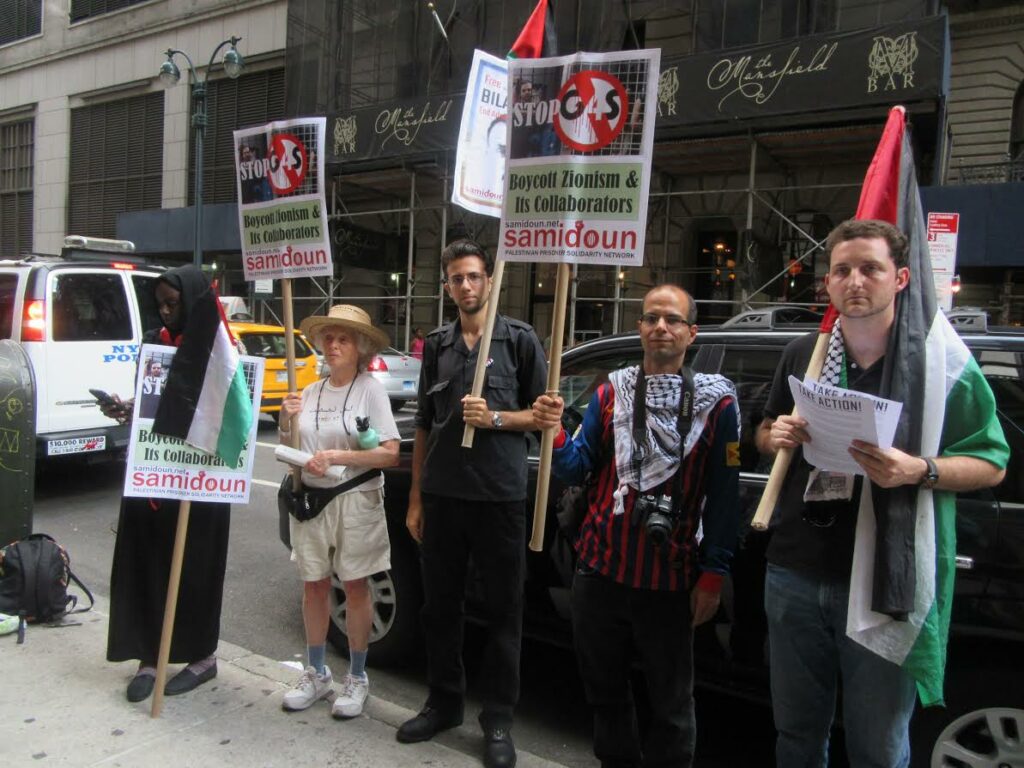 New York City demonstrators rallied on Friday, 19 August outside a Manhattan office building holding an office of the British-Danish security company G4S, a contractor with the Israeli prison system, before marching twice through its lobby to call for the release of Bilal Kayed, a Palestinian prisoner on hunger strike against Israeli imprisonment without charge or trial. 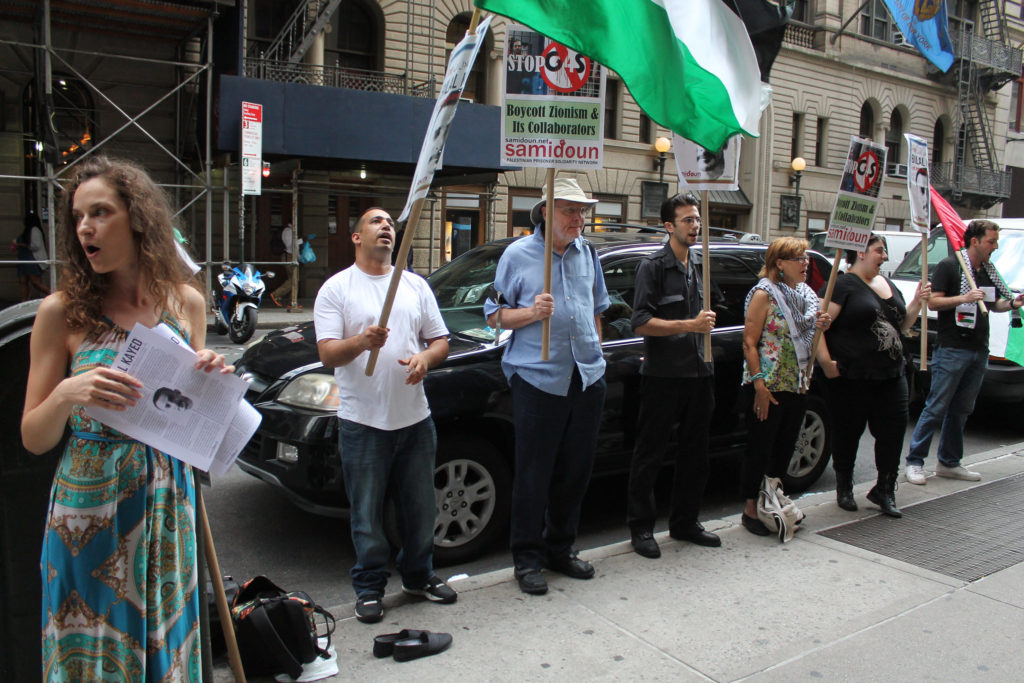 Kayed marked his 66th day of hunger strike; as noted by Joe Catron, Samidoun organizer in New York, the 66th day of hunger strike was the day on which Irish republican political prisoner Bobby Sands died in 1981 in British jails, and the day of strike on which Khader Adnan achieved victory in 2012. Kayed, 34, has been on hunger strike since 15 June in protest of his imprisonment without charge or trial. Following the completion of his 14.5-year sentence in Israeli prison, instead of being released, he was ordered to a six-month indefinitely-renewable term of administrative detention. His case threatens a dangerous precedent of the indefinite imprisonment of Palestinian prisoners following the expiration of their sentences, and his strike is supported by over 100 fellow Palestinian prisoners on strike for his freedom.

Protests around the world, including numerous events and actions in New York City, have demanded Kayed’s release. Samidoun Palestinian Prisoner Solidarity Network’s weekly Friday protest targets G4S, the security corporation that is the subject of a global boycott campaign due to its involvement in providing control rooms, equipment and security systems to Israeli prisons, checkpoints and police training center. G4S’ involvement in youth incarceration and migrant detention and deportation in the United States, Canada, Australia, the UK and elsewhere. G4S has pledged to exit its Israeli business, but Palestinian campaigners have emphasized the importance of continuing to pressure the corporation until it no longer profits from the imprisonment of Palestinians. The Boycott National Committee issued a call for escalation of G4S protests in light of Kayed’s strike and the struggle of the prisoners. 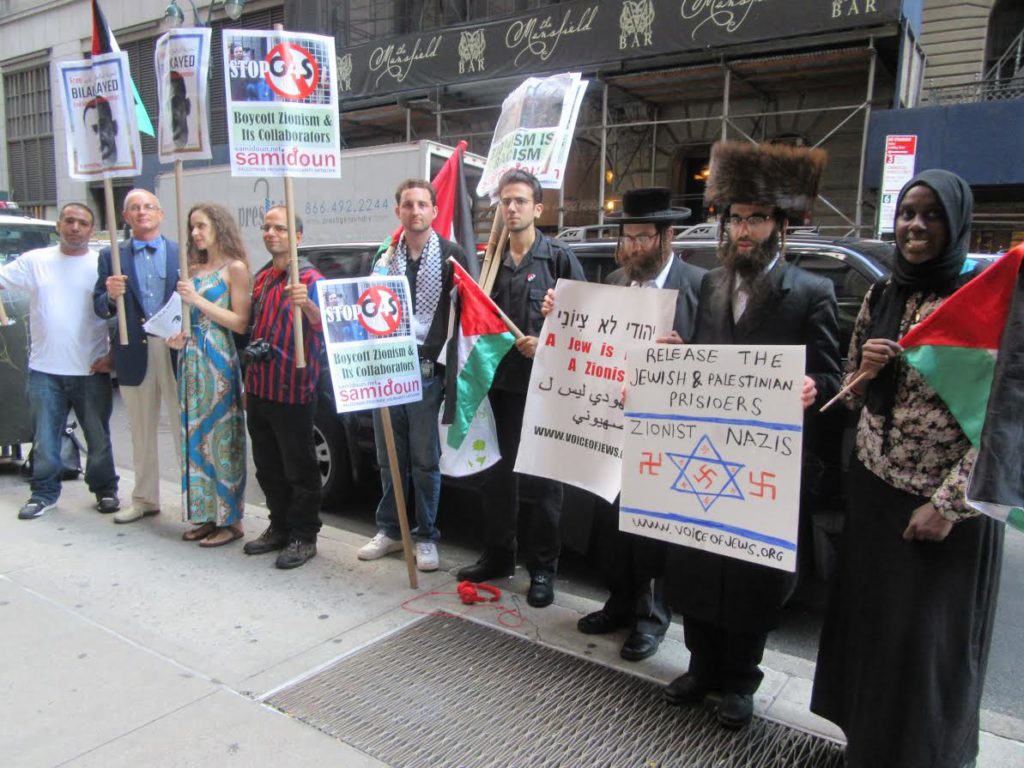 Protesters marched repeatedly through the corridor inside 19 W. 44th Street, G4S’ office in Manhattan, chanting and demanding that G4S get out of Palestine, and distributed information and leaflets to passersby about Kayed’s strike and the situation of Palestinian prisoners. The protest was joined by several members of Voice of Jews, an Orthodox Jewish anti-Zionist organization opposed to the existence of the Israeli state and its army on religious and theological grounds. 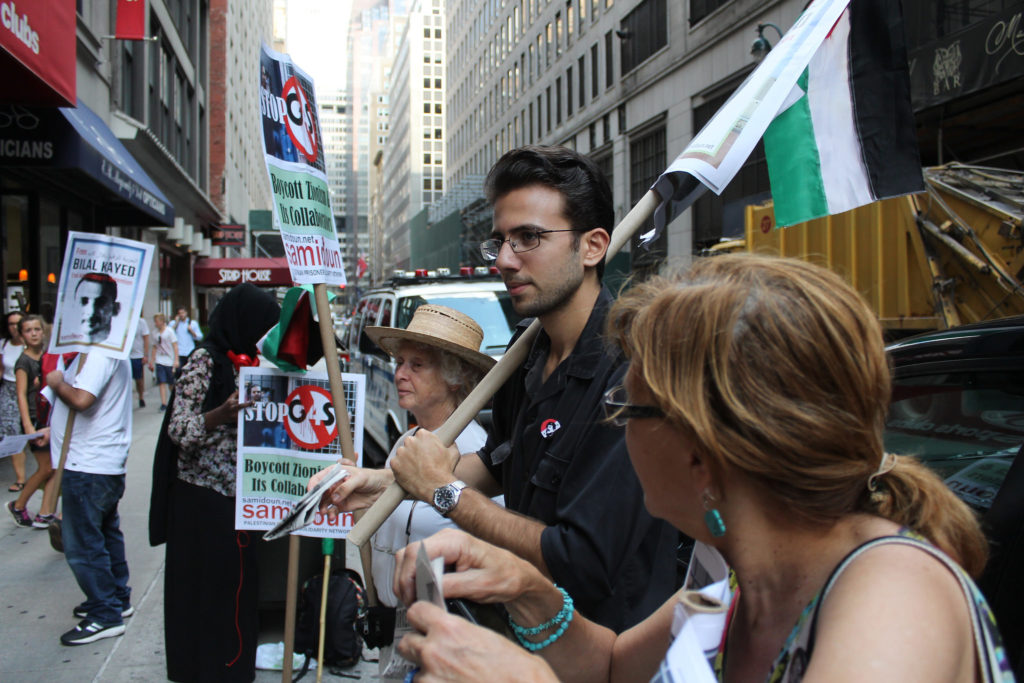 Joe Catron of Samidoun spoke about the role of G4S in mass incarceration, criminalization and repression of popular struggle, including its potential role in attacking the Dakota Access Pipeline blockade being conducted by Lakota Sioux in North Dakota.  The pipeline’s construction was halted prior to a federal court hearing next week, but prior to the announcement of the construction halt, G4S had been reported as contracted to provide “backup security” to repress the blockade alongside police, who arrested 28 people in the last week. 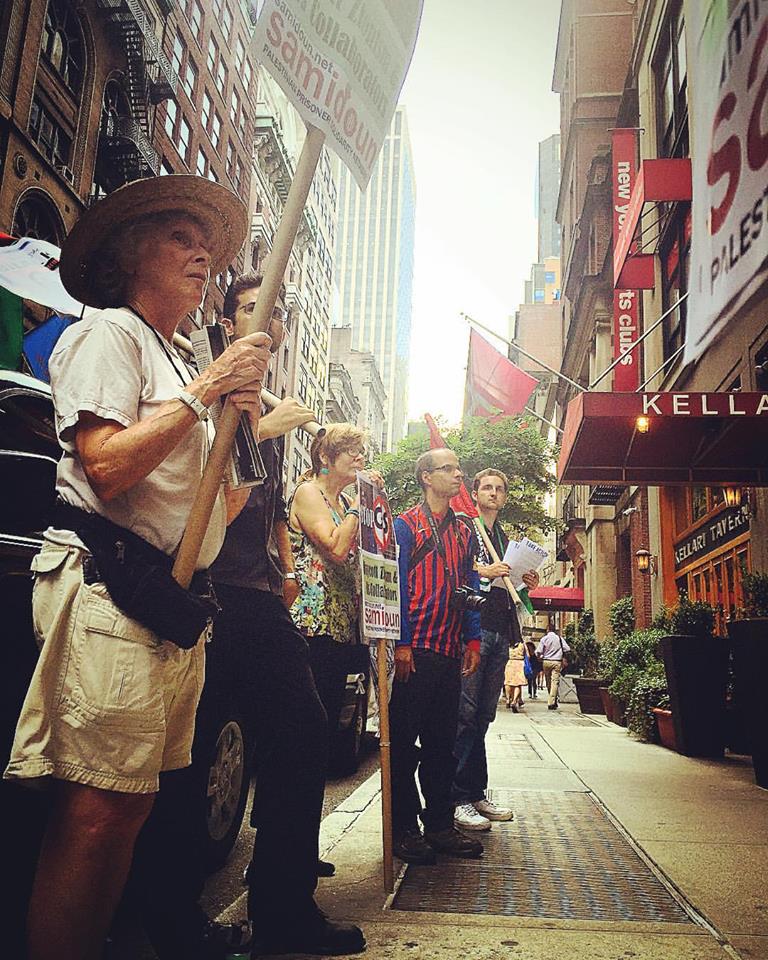 New Yorkers will continue to gather in support of Bilal Kayed and his fellow Palestinian prisoners, including next Tuesday, 23 August for a reportback from Palestine by members of NYC Students for Justice in Palestine who visited Kayed’s family and the solidarity actions in support of his struggle inside occupied Palestine on a recent delegation.