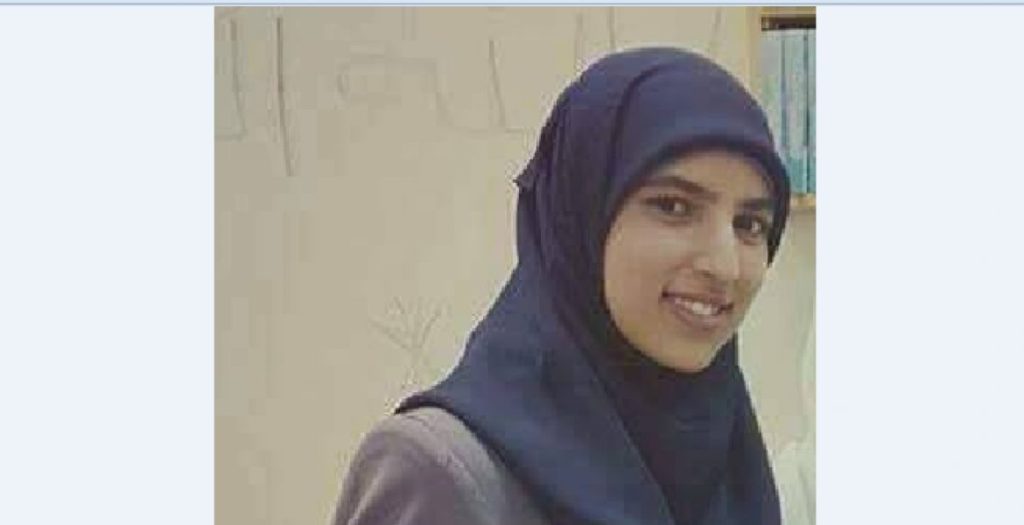 Palestinian student Noor Darwish‘s military court trial was once again continued on 25 October until 14 December. Darwish, 22, is a student at Al-Quds University in Abu Dis. On 19 April, she was arrested by Israeli occupation forces alongside two other female students at the university; all of the charges against the students were based on their participation in public events and activities of the student union and the Islamic Bloc, one of the student parties at the university.

Darwish, from the village of Deir Abu Meshaal near Ramallah, is active in the Islamic Bloc at the university, where she studies in the health sciences faculty. Her brother Miqdad spent 16 months in Israeli prison as well as two months in Palestinian Authority prisons; he studies computer engineering at Palestine Polytechnic University.

Meanwhile, Palestinian student Sujoud Daraweesh, who studies at Hebron University, was issued an order on 25 October by the Shin Bet, the Israeli intelligence agency, prohibiting her from entering the city of al-Khalil, where her university is located. Daraweesh had been arrested for one day in late September and interrogated by the intelligence agency in Etzion military camp before being released. She is seeking to complete her studies remotely; the university denounced the banning of Daraweesh as an attack on Palestinian students’ right to education, placing it in the context of ongoing attacks on the rights of Palestinian students.

Daraweesh lives in the village of Dura, outside the city; the exclusion order is dated until 13 February 2017. She is in her final year of studies of Islamic law at the university, scheduled to graduate in the coming spring. In an interview with Al-Araby Al-Jadeed, Daraweesh said that the university was working with her to prevent the Israeli occupation from stamping out her educational goals, including meeting with tutors and conducting exams in Dura. “The Israeli occupation wanted to punish me and deprive me of my future education and life with this order of exclusion, but we have the determination and resolve to confront this order and will not allow the occupation to achieve its goals,” said Daraweesh.

Meanwhile, the detention of Ghadeer Jamjoum of Jerusalem was extended by occupation forces until Friday, 28 October, the fifth extension of her detention since her arrest on 12 October. She is forbidden to meet with her lawyer and publication of the details of her case continue to be prohibited by court order.

Amer, Faraoun, Jamjoum and Darwish are among approximately 60 Palestinian women imprisoned by the Israeli occupation; most are held in either HaSharon or Damon prisons. Damon prison is very distant from the military courts, and prisoners going to trial are forced to be transported by “bosta” for lengthy hours and even days of travel. Former long-term hunger striker Samer Issawi announced on 27 October that he is on hunger strike in Nafha prison in solidarity with his imprisoned sister Shireen Issawi and the other women in Damon prison, urging that they be transferred somewhere closer to the courts and calling for an end to the abusive practices against the imprisoned women.