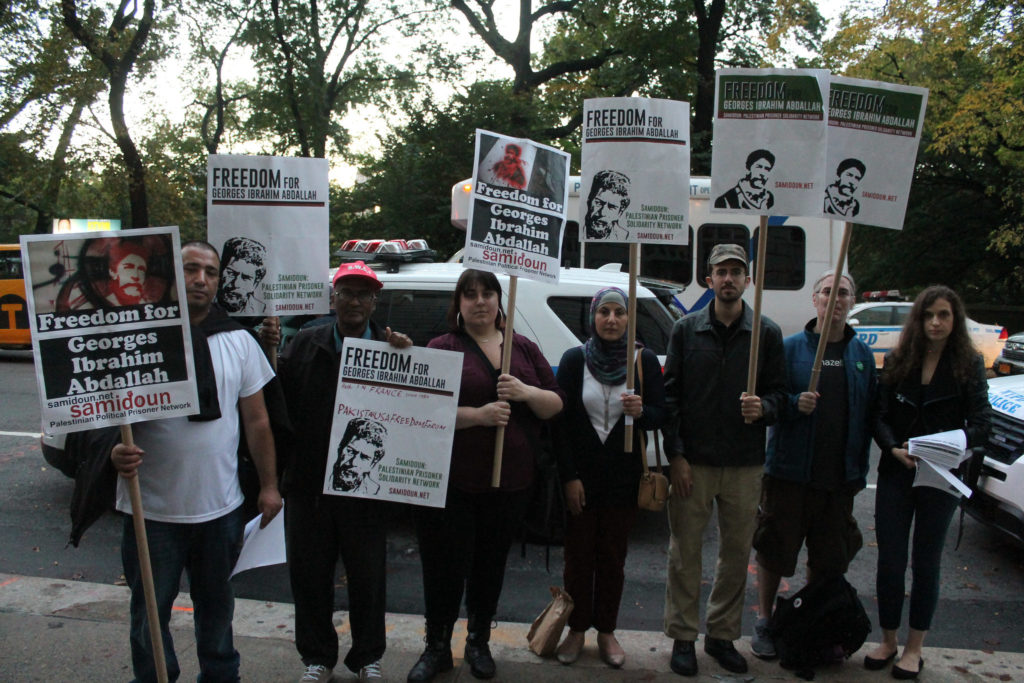 New Yorkers gathered for their second protest in two weeks to free Georges Ibrahim Abdallah, imprisoned Lebanese Arab struggler for Palestine held in French prisons since 1984. The protest by Samidoun Palestinian Prisoner Solidarity Network came as part of an international week of solidarity with Abdallah, marking the 32nd anniversary of his arrest by French police. It also marked the first anniversary of Samidoun’s organizing and weekly protests for the freedom of Palestinian political prisoners in New York City. 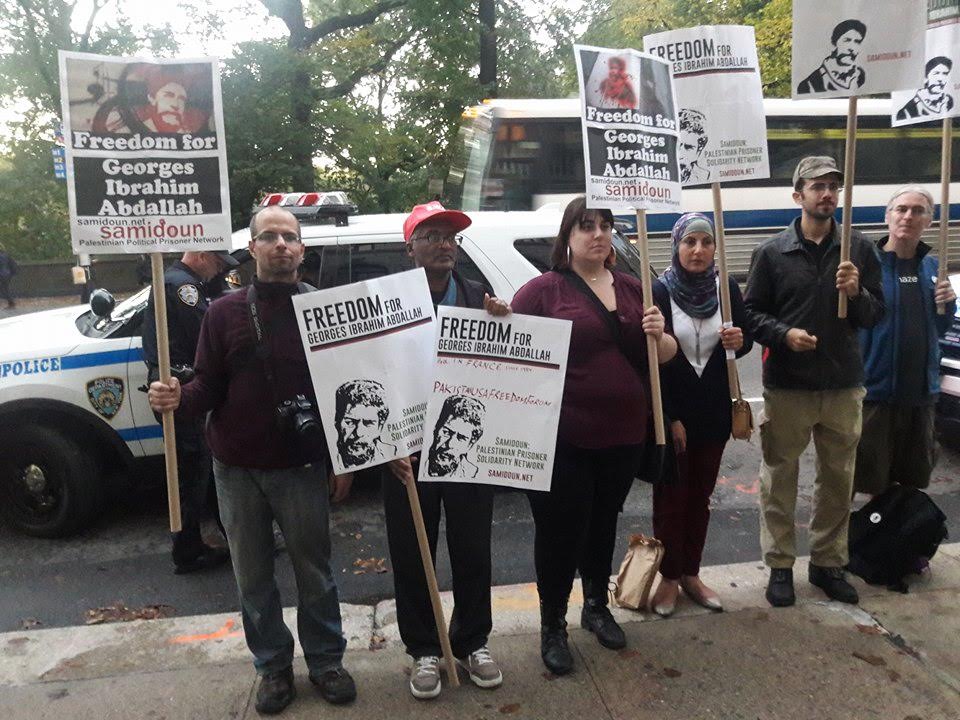 Protesters in New York City rallied outside the consulate general of France on Friday, 21 October before concluding with a march to the nearby consulate general of Lebanon. The demonstrators remained outside the French consulate, hosting an evening event, for several hours, distributing large numbers of leaflets about Abdallah’s case. Numerous passers-by took interest in the case and the protest, including attendees at the consulate’s event. 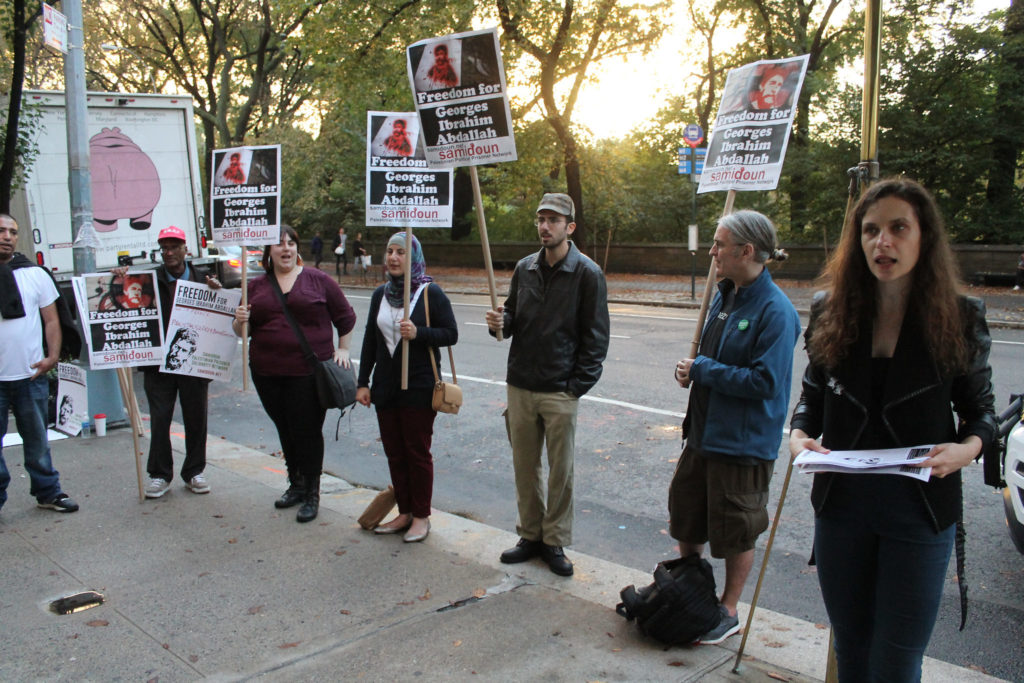 The protest was watched constantly by four NYPD officers from the “Counterterrorism Bureau” throughout the demonstration. Participants chanted “Free, free Georges Abdallah!” outside the consulate and while marching to the Lebanese consulate to call on the Lebanese state to take action to pressure the French government to release their imprisoned citizen. 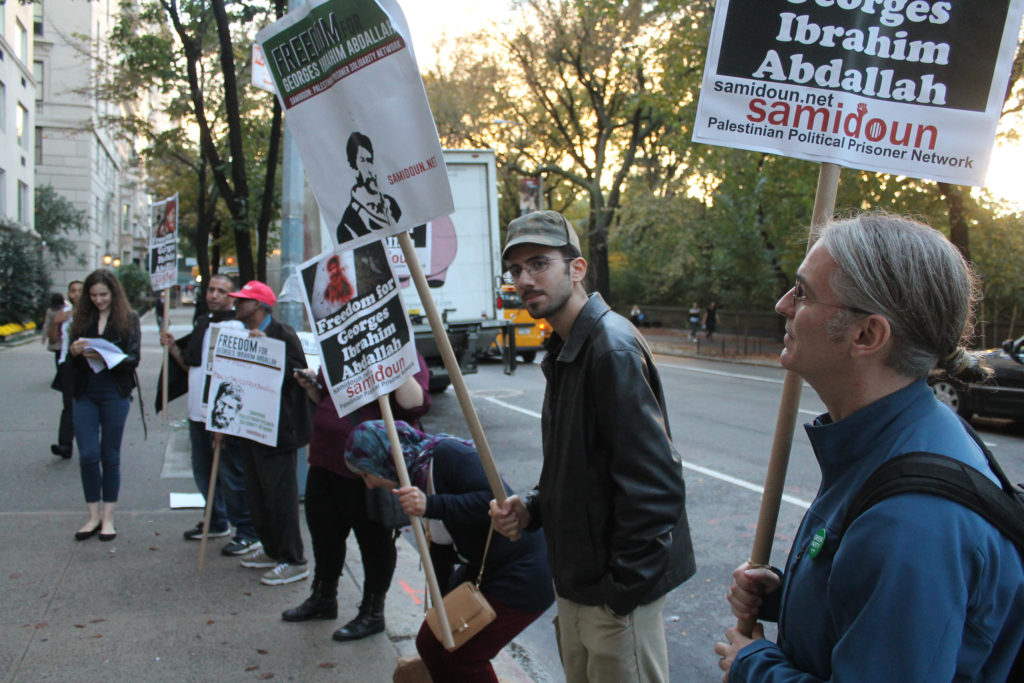 Following the demonstration, activists commemorated the one-year anniversary of Samidoun activities in New York City at the Solidarity Center and prepared for their next protest on Friday, 28 October outside the offices of G4S, the global security corporation that provides services to Israeli prisons, checkpoints and settlements. 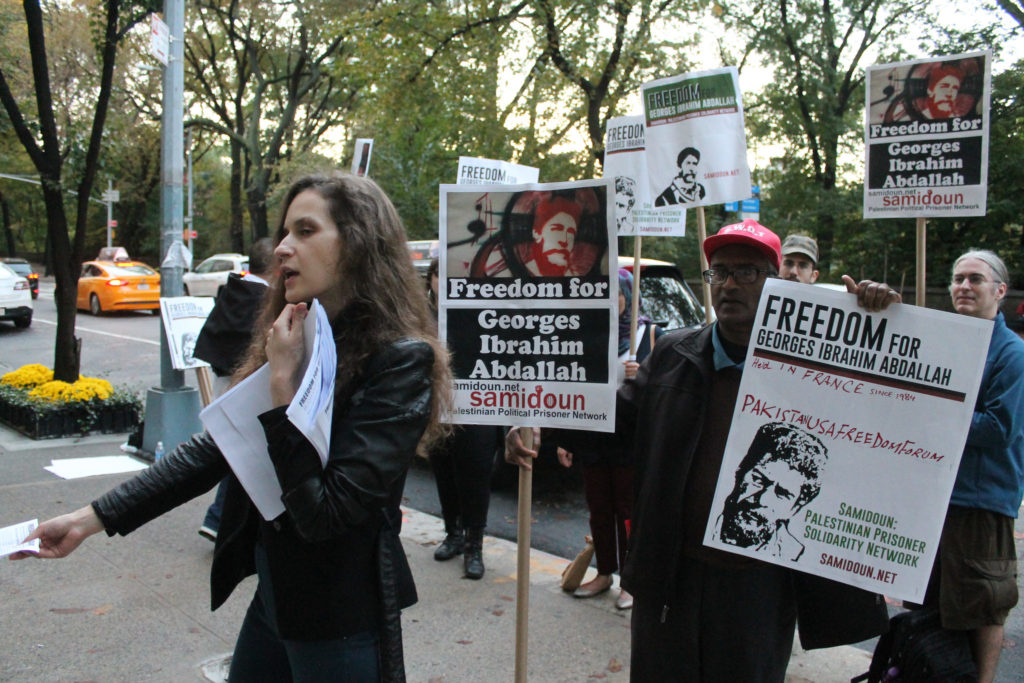 Abdallah was originally imprisoned on charges of holding a false passport; after years of detention, including a promised prisoner exchange in which France reneged on its commitment to release Abdallah and his own lawyer serving as a spy for French intelligence, he was later charged and then convicted for armed actions by the Lebanese Armed Revolutionary Fraction (LARF) which targeted American and Israeli officials, killing two. These events took place during the Israeli occupation of Lebanon – Abdallah has a long history of resistance to Zionist attacks on Lebanon and support for the Palestinian people’s struggle. He remains a committed revolutionary Communist and organizes alongside other political detainees, including Basque prisoners, and Arab prisoners, inside French prisons. He refused meals for three days earlier this year in solidarity with Palestinian hunger striker Bilal Kayed. 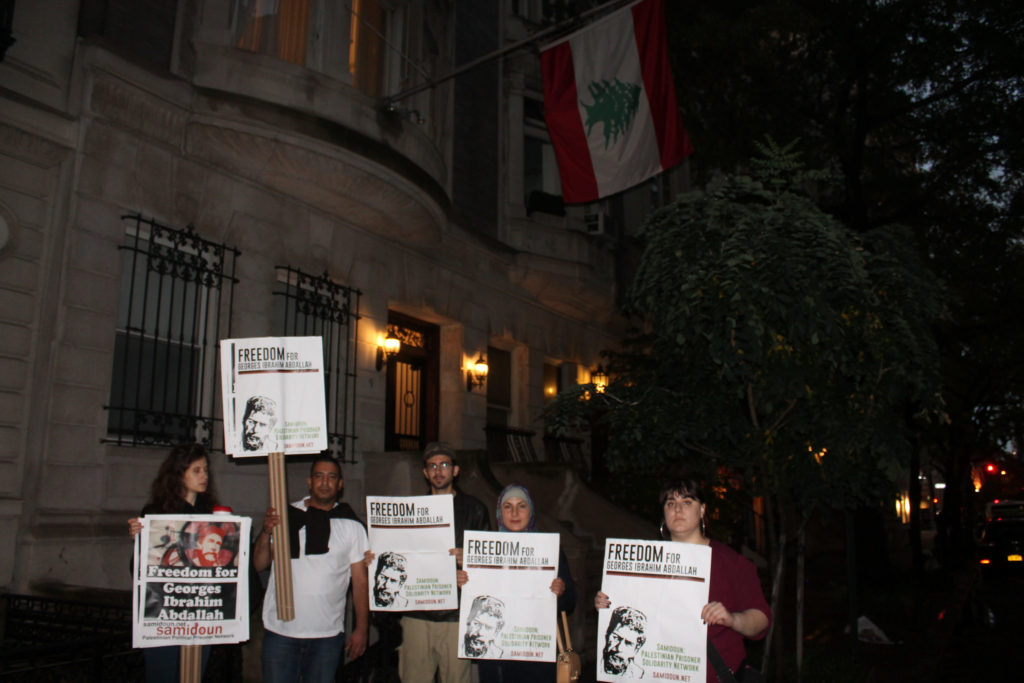 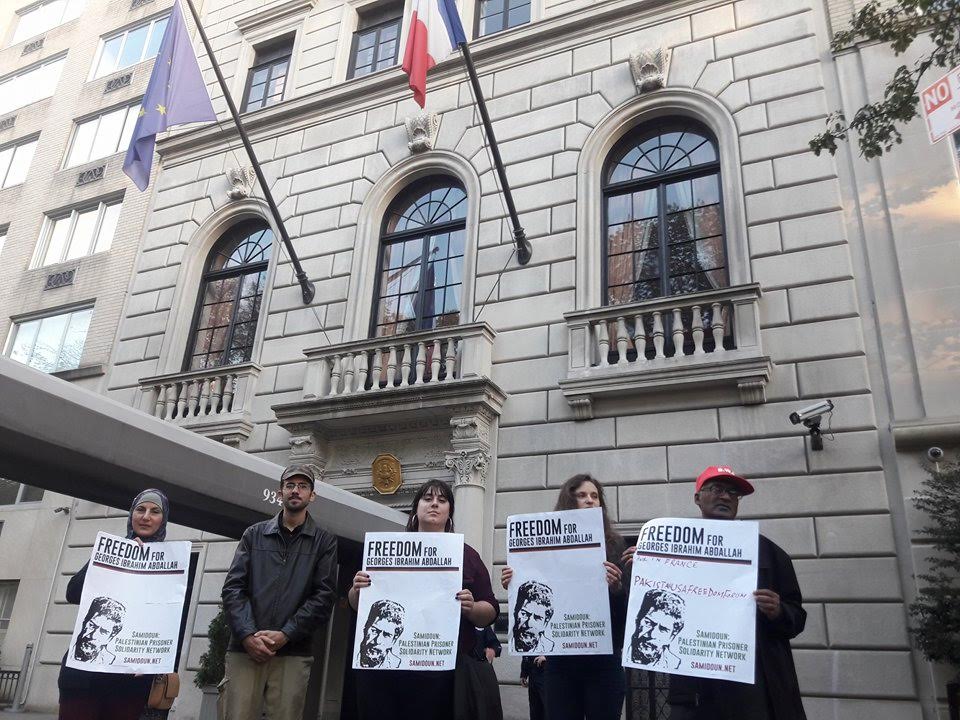 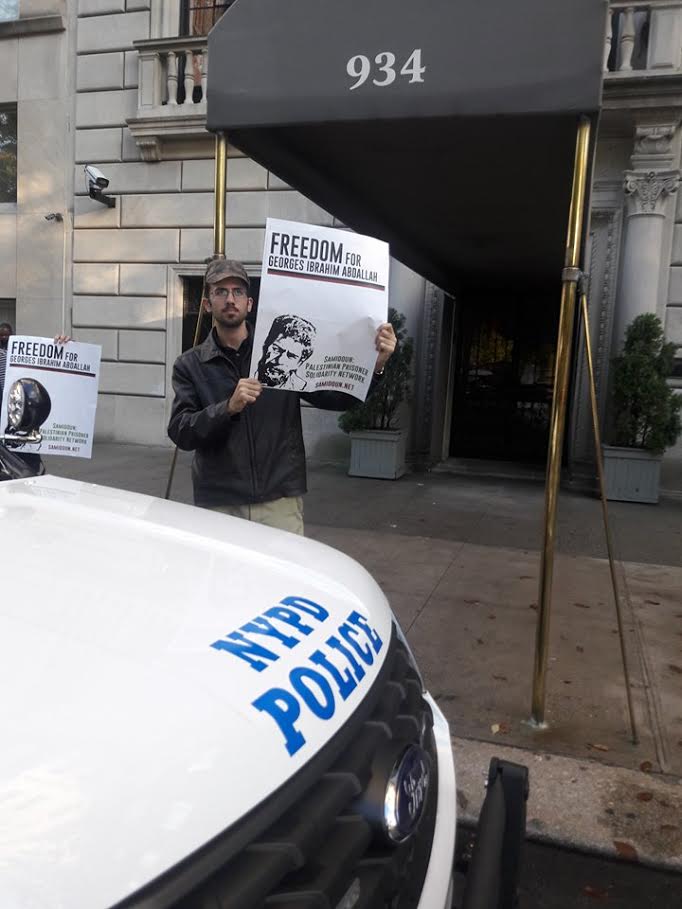 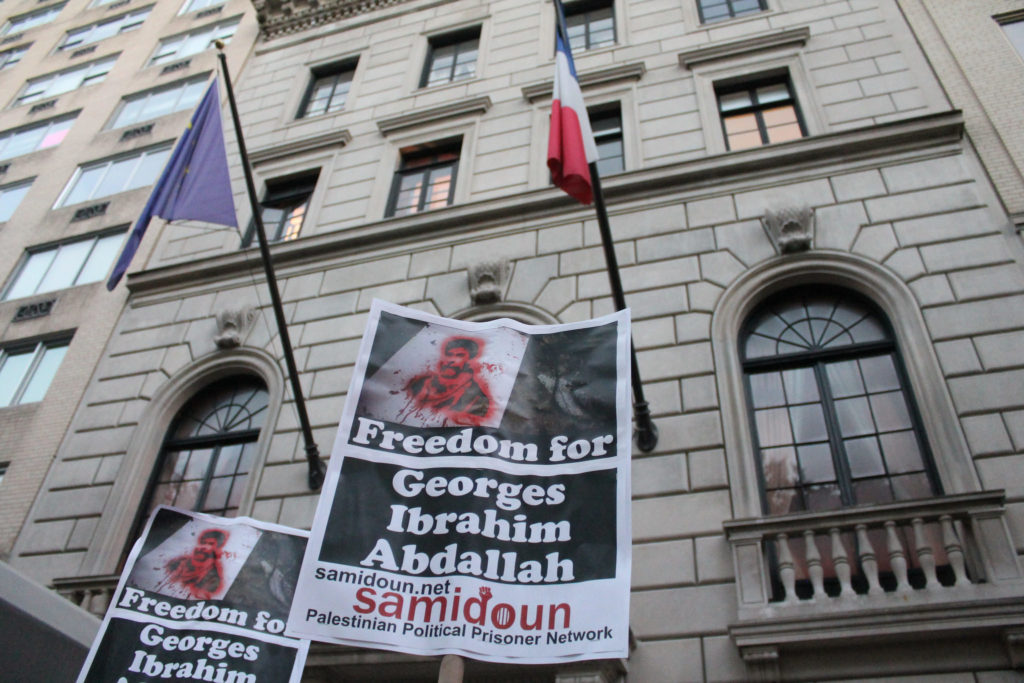