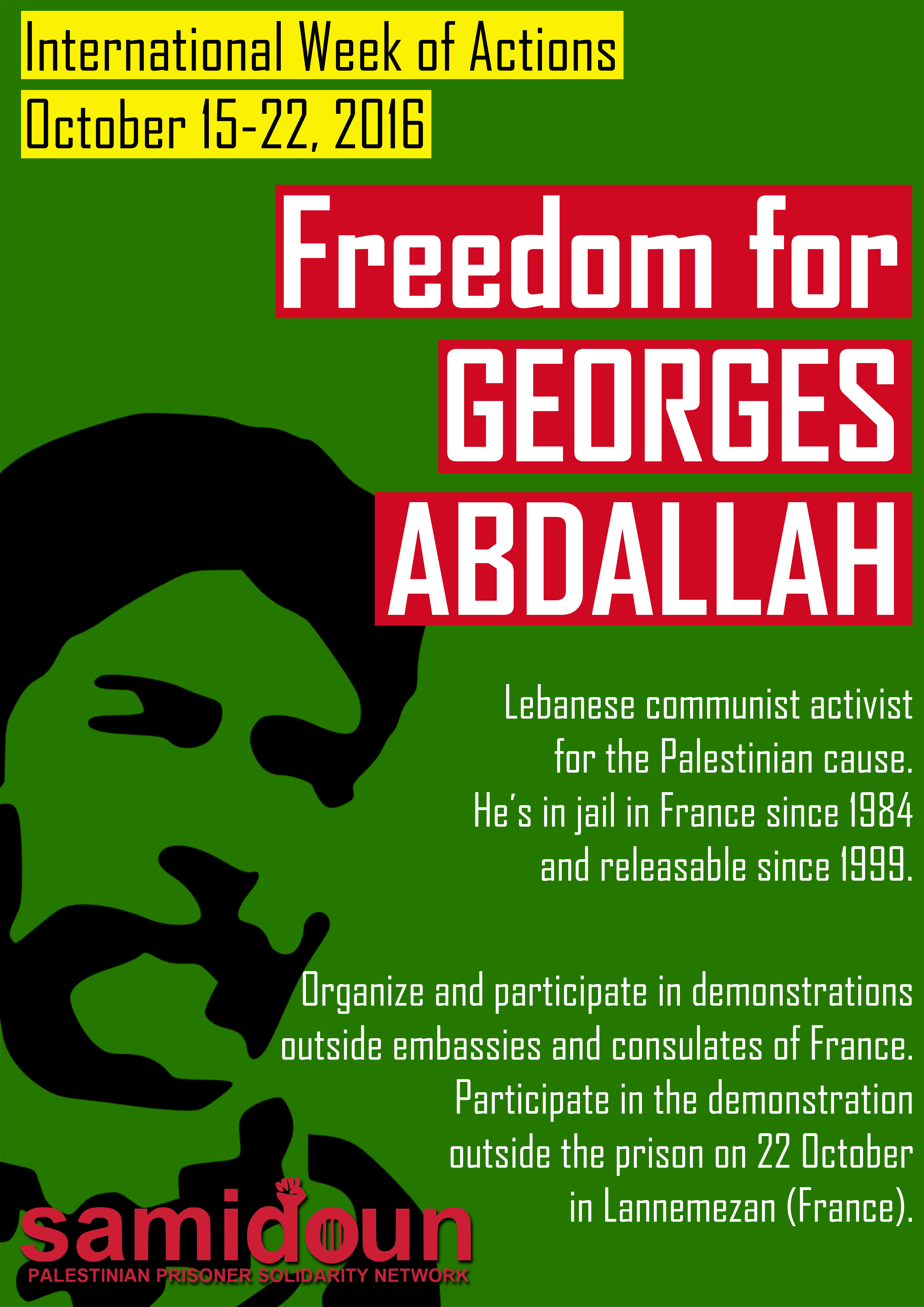 Samidoun Palestinian Prisoner Solidarity Network urges all friends and supporters of Palestine and the Palestinian prisoners’ strugle for freedom to join in the international week of action on 15-22 October in support of Georges Ibrahim Abdallah, Lebanese Arab struggler for Palestine, imprisoned in French prisons for over 32 years. Georges Abdallah’s case has built significant support in Lebanon and in France, and Palestinian prisoners have highlighted the importance of Abdallah’s case as part of the struggle of the Palestinian political prisoners for freedom and liberation.

Abdallah was sentenced to life imprisonment in France, accused of participating in actions in France targeting U.S. and Israeli interests during the Israeli invasion and occupation of Lebanon. During his arrest and trial, one of his original lawyers was a spy against him, working for French intelligence. He has been eligible for release under parole since 1999; he has been repeatedly refused, and at times when his release to Lebanon has been approved by the French judiciary, the highest forces of the state, including then-Interior Minister Manuel Valls – with the clear involvement of the U.S. government, including the personal intervention of Hillary Clinton – have intervened to keep Georges Ibrahim Abdallah locked up in French prison.

Throughout his time in prison, Georges Ibrahim Abdallah has remained politically active and, indeed, a leader, extending solidarity and full support to struggling prisoners and peoples’ movements around the world. He and fellow prisoners – Basque and Arab, among others – in Lannemezan prison returned their meals in solidarity with Palestinian hunger striker Bilal Kayed, and he has previously participated in hunger strikes in solidarity with Palestinian individual and collective strikes for justice and freedom. He recently expressed his solidarity with Toulouse BDS activists under attack and has constantly remained an active thinker on Arab, Palestinian and international liberation struggles.

He has always refused to in any way capitulate or renounce his political vision and commitment to the Palestinian cause, to the people of Lebanon, and to international struggles for liberation. He remains a committed anti-Zionist, anti-capitalist and anti-imperialist. In part because of that very refusal, he remains today imprisoned in the French prison of Lannemezan.

The imprisonment of Georges Abdallah comes alongside the persecution and arrest of BDS activists in France for urging the boycott of Israel in solidarity with the Palestinian people, ongoing racist targeting of Arab and Muslim communities in France and the “state of emergency” being used to repress popular movements for justice, while the French state promotes itself as a supporter of “peace” in the region while acting directly in support of the Israeli occupation and Zionist colonization.

We urge friends and supporters of Palestine around the world to organize events and protests and engage in actions on 15-22 October for the freedom of Georges Ibrahim Abdallah and all Palestinian prisoners, and to join in the collective march on 22 October in Lannemezan at 2 pm outside the prison, demanding the immediate release of Georges Abdallah.

The statement in French by the Unified Campaign for the Liberation of Georges Abdallah is published below, urging participation in the week of action. Samidoun joins in this call and urges all to take part as well. Please email us at samidoun@samidoun.net or message us on Facebook about your actions in solidarity with Georges Abdallah. (Suggested actions include protests at French embassies and consulates; deliveries of letters to French officials; and protests of official French visits or activities.)

Who Is Georges Ibrahim Abdallah?

A Lebanese Arab struggler for Palestine, he has been imprisoned in French prisons since 1984, convicted on charges of participation in armed actions by the Lebanese Armed Revolutionary Faction, working to fight off colonialist and Zionist invasions in Lebanon.

From his youth, Georges Abdallah was an activist, working first with the Syrian Social Nationalist party and then with the Popular Front for the Liberation of Palestine (PFLP). With the PFLP, he resisted and was injured by Israeli forces invading Lebanon in 1978. A committed Communist and internationalist, he views the Arab struggle for liberation from Zionism and imperialism as part and parcel of the international workers’ struggle for liberation from capitalism.

The Lebanese Armed Revolutionary Faction (LARF) was formed to fight off and resist U.S., Israeli and other imperialist attacks on Lebanon. Georges Abdallah was accused of participating in attacks on U.S. and Israeli military officials in France.

He has been eligible for release since 1999 yet continues to be denied parole, despite having parole requests approved several times by French judges. The Lebanese government has officially asked for his release, and he is asking to be deported to Lebanon. Yet the French state has intervened at the highest levels, alongside the U.S and Israeli regimes, to deny Georges Abdallah’s parole requests.

In fact, in 1985, the French government agreed to a prisoner exchange – to release Abdallah in exchange for a captureed French diplomat. Instead, the diplomat was released – and Abdallah remained in prison. His own original lawyer was in fact a spy working for the French state and reporting on him to the highest levels of French intelligence; all of which was used against him in court.

People throughout France and around the world have campaigned for his freedom for decades. His brothers and loved ones in Lebanon lead the International Campaign to Free Georges Ibrahim Abdallah. He is considered as part of the Palestinian prisoners’ movement by Palestinian prisoners in Israeli jails.

His case represents also the coherence of U.S., Israeli and European colonialist interests in the imprisonment of Palestinian and Arab strugglers for liberation and the attack on the Palestinian people.

SUNDAY, 16 OCTOBER
Paris, France:
10 am – 1 pm: Information at the Saint-Ouen market
2 pm: Emergency event in solidarity with all of the accused of the social movements

MONDAY, 17 OCTOBER
Paris, France
6 pm – Gathering at Saint-Michel bridge to link between 17 October 1961 and the struggle of Georges Ibrahim Abdallah

Gaza, Palestine
10 am – Protest for freedom for Georges Abdallah, ICRC

3 July 2020
The following report is largely translated from the original French, published by Collectif Palestine Vaincra, a member organization of the Samidoun Palestinian Prisoner Solidarity...

3 July 2020
Georges Ibrahim Abdallah, the Lebanese Arab Communist struggler for Palestine jailed for over 35 years in France, released a statement in support of the...

20 June 2020
Read this report in Arabic. Activists in Tunis took to the streets on Saturday, 20 June for a protest to free Georges Ibrahim Abdallah, Ahmad...

Join the Twitterstorm to #FreeGeorgesAbdallah on Friday, 10 April

From Italy: Confront repression for the weeks of action for Ahmad Sa’adat and Georges Abdallah

Call for action on 19 January: Freedom for Georges Abdallah and Ahmad Sa’adat!

Over 500 march in Lannemezan to free Georges Abdallah

International call for an action month for Georges Abdallah

19 October, Lannemezan: March for the liberation of Georges Abdallah!