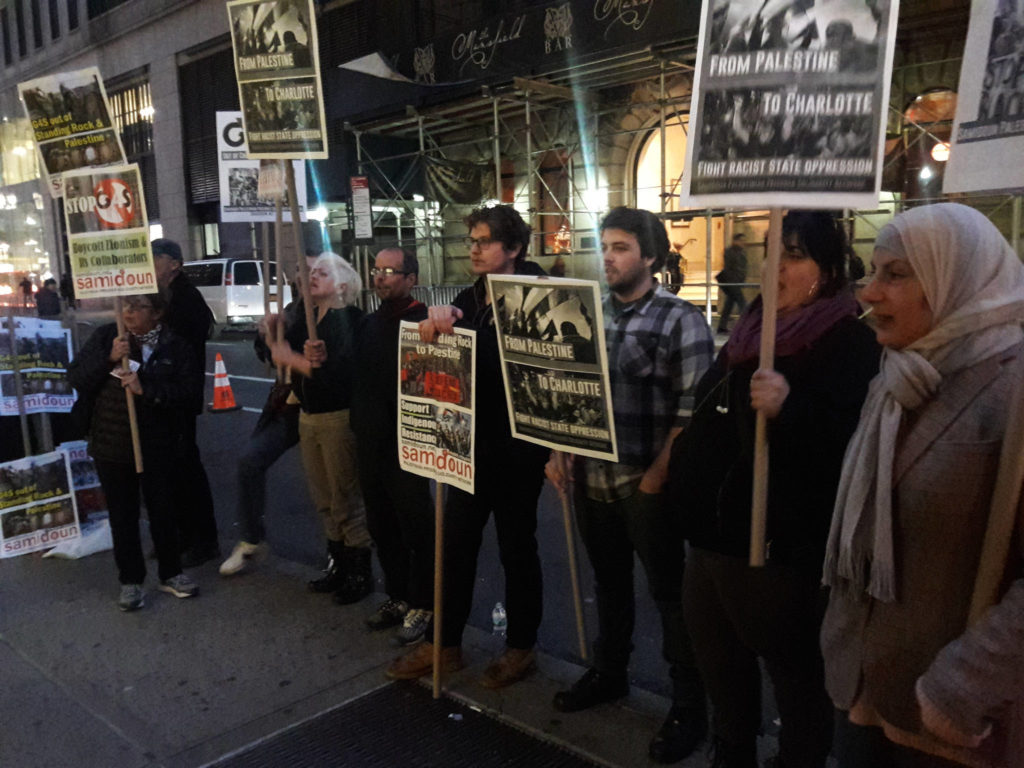 New York City activists took to the streets outside the offices of British-Danish global security corporation G4S on Friday, 11 November, protesting the corporation’s involvement in human rights abuses and settler colonial attacks from Palestine to Standing Rock to Charlotte. 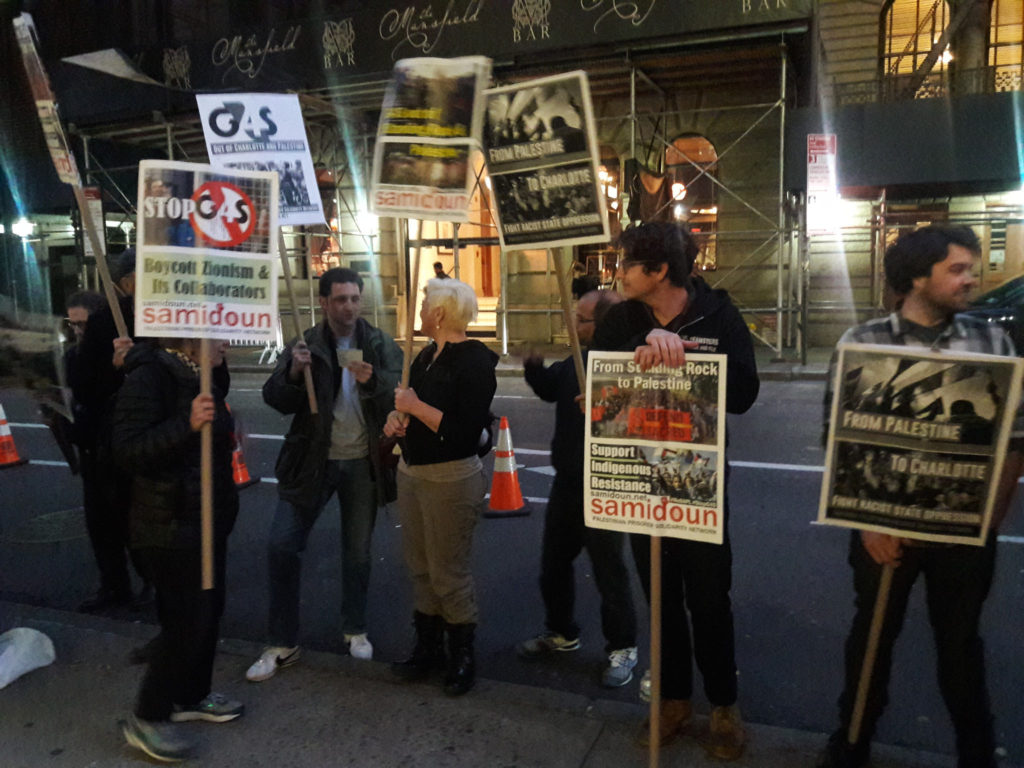 Samidoun Palestinian Prisoner Solidarity Network protested outside G4S’ Manhattan office to demand the corporation get out of the business of profiting from occupation and oppression. Protesters stood in solidarity with and distributed information about the hunger strikes of Palestinian prisoners Anas Shadid and Ahmad Abu Fara, on hunger strike for 50 days against their imprisonment without charge or trial under administrative detention. 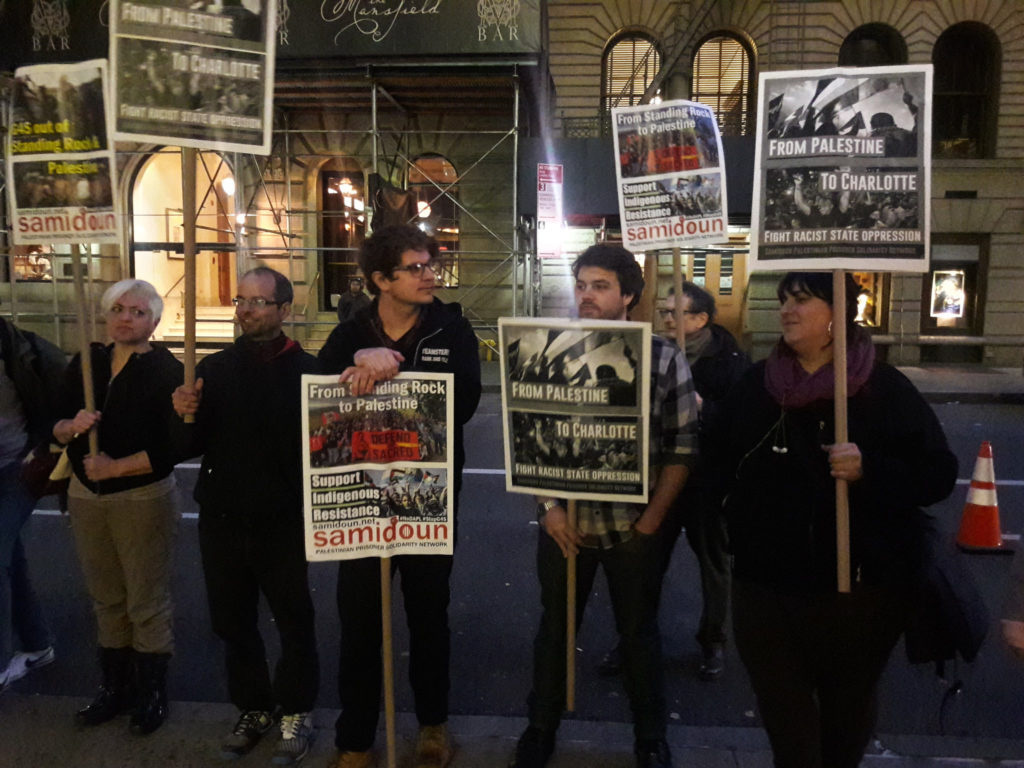 G4S is subject to a global boycott campaign due to its services to the Israeli state and its repressive mechanisms; it provides equipment, control rooms, and security systems not only to Israeli prisons but also to checkpoints, police training facilities, and even the Beit Hanoun/Erez crossing where the siege on Gaza is enforced. After multiple contract and investment losses, G4S has announced that it plans to sell off its “reputationally damaging” businesses; Palestinian activists have emphasized the importance of continued protest as G4S equipment is still being used to repress Palestinians right now.

The struggle against G4S is not limited to its role in Palestine. The corporation contracts to run private prisons for youth, migrant detention facilities and transportation, and other aspects of the security state in the United States, Canada, Australia, the UK and elsewhere. The New York City protest highlighted the involvement of G4S in Charlotte, North Carolina,  where armed Charlotte Area Transit System officers, a private, G4S-run “company police” force, operate alongside the racist, lethal cops who killed Keith Scott. It also denounced the corporation’s involvement in providing private security for the Dakota Access Pipeline against the Standing Rock Sioux Nation‘s blockade and protest camp in defense of indigenous land and water rights.  Protesters have faced brutality from the array of private security guards attempting to suppress indigenous protest, including the use of tear gas, attack dogs, and rubber bullets.

Protesters chanted and distributed information outside the building, while groups of protesters entered the building’s corridor, chanting loudly against the role of G4S in Charlotte, Standing Rock and Palestine. Security guards locked the doors to the building’s entrance to prevent protesters from continuing to enter the corridor, a legally-designated public space. 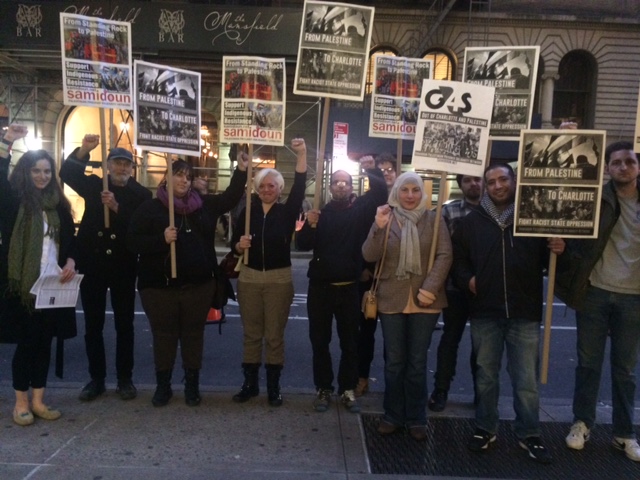