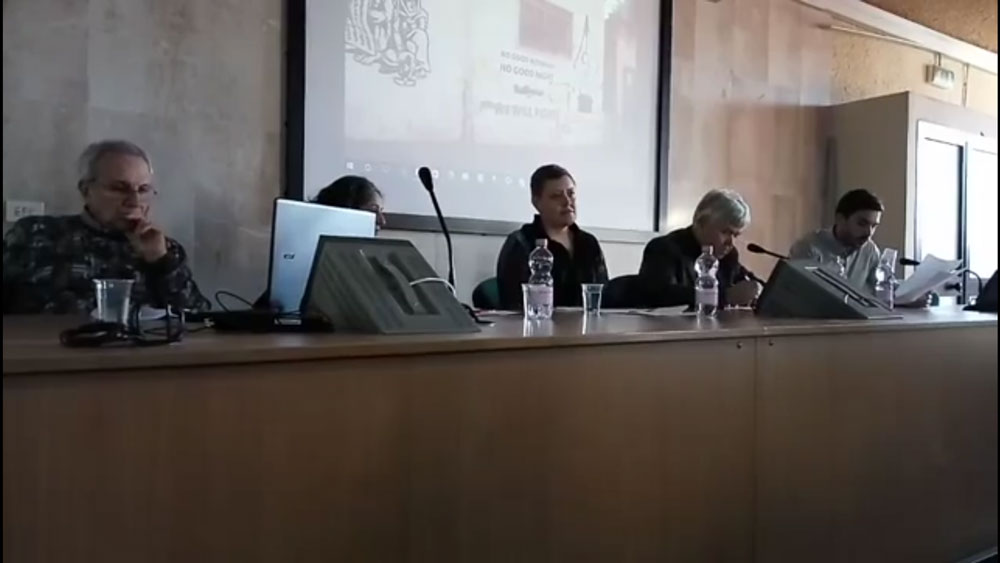 Israeli Apartheid Week began in Cagliari, Sardinia, Italy on Monday, 27 February with an event on the Right to Education and Academic Freedom in Palestine, focusing on the Palestinian call for academic boycott of Israeli academic institutions as well as the campaign to end the partnership with Israeli military-linked university, the Technion, at the University of Cagliari.

Part of the global week of action highlighting the struggle for Palestinian rights, the event panel included Charlotte Kates of Samidoun Palestinian Prisoner Solidarity Network and Angelo Stefanini, retired professor of economics, management and statistics at the University of Bologna, as well as a video from the Right to Education Campaign at Bir Zeit University in Palestine. Professor Andrea Pubusa of the University of Cagliari moderated the event.

Kates spoke about the institutional denial of the Palestinian right to education, focusing on arrests, raids and imprisonment targeting Palestinian students and faculty. She reviewed the current statistics on Palestinian prisoners, noting that there are approximately 7,000 Palestinians currently imprisoned in Israeli jails that represent all sectors of Palestinian society. She noted the array of military orders that constantly regulate Palestinian life under occupation, as well as the occupation military courts with a 99.74% conviction rate. She also discussed the Israeli policy of administrative detention, currently imprisoning nearly 600 Palestinians without charge or trial, in clear violation of international law.

She also spoke about Israeli raids on Palestinian academic institutions, noting, among other occasions, that “raids at Bir Zeit University have targeted academic departments and student council headquarters; while the raids often take place at night and at times in the day, what is left behind is destruction as glass is shattered, belongings ransacked and computers and documents seized and disassembled. At Al-Quds University in Abu Dis, the Islamic Studies department was invaded and ransacked, with books, materials and documents confiscated by the Israeli military. In a daytime attack on Al-Quds University in Abu Dis, over 50 students were injured due to massive use of tear gas and rubber-coated metal bullets.”

Kates highlighted the vibrancy of student political life in Palestine and the concerted, violent campaign of raids and arrests seeking to shut down that process. Involvement with Palestinian student organizations, councils and blocs is criminalized as those blocs are labeled “prohibited” or “hostile organizations,” and student elections are met with increased raids, repression and imprisonment of student organizers.

Angelo Stefanini provided a thorough introduction and overview of the boycott, divestment and sanctions movement (BDS) and the call for academic boycott of Israeli institutions. He laid out the reasons for academic boycott, including the involvement of Israeli academic institutions in the structures of occupation, their involvement in military research and development – particularly noting the Technion’s role in this regard – as well as the ongoing violations of Palestinian academic freedom carried out over decades of occupation, colonialism and oppression.

The panel concluded with a video from the Right to Education Campaign at Bir Zeit University, in which university students spoke about their own experiences with Israeli occupation and oppression, urging students and faculty internationally to support BDS and the academic boycott of Israeli institutions. Presentations were followed by a lively discussion highlighting the situation of military bases and testing in Sardinia, including the participation of US and Israeli forces in weapons testing on the island.

Israeli Apartheid Week in Cagliari is continuing over the coming week. Events continue on Wednesday, 1 March at 5:00 pm with documentary presentations at Aula Arcari at the Faculty of Economic, Juridical and Political Sciences at the University. The event will include screenings of “The Living of the Pigeons” by Baha’ Abu Shanab and “Shujayya” by Mohammed al-Mughanni. On Thursday, 2 March at 5:00 pm, in the same room, there will be a presentation of the Italian-language translation of Ghassan Kanafani’s “1936-39 Revolt in Palestine,” with presentations by Giuseppe Pusceddu of the Associazione Amicizia Sardegna Palestina and Samed Ismail of the Collettivo Universitario Autonomo Casteddu. On Friday, 3 March in Aula A, an event at 4:00 pm. will highlight “Military Occupation from Sardinia to Palestine,” with Alessia Ferrari of BDS Sardegna and Nicola Piras of the Committee Against Military Occupation of Sardinia. The week of action will close with a concert at Scalette Magistero, featuring hip-hop performances. Cagliari will also soon host the 14th Al-Ard Documentary Film Festival, highlighting documentary films on Palestine and the Arab world.