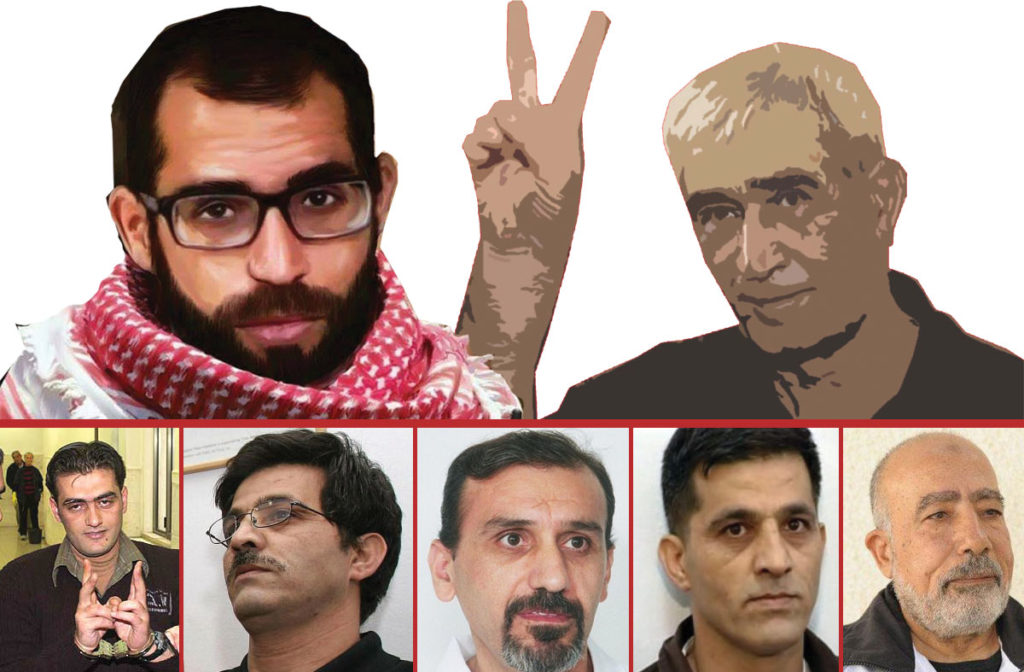 14 March 2017 marks the 11th anniversary of the attack on Jericho prison by Israeli occupation forces and the abduction of six Palestinian political prisoners. Ahmad Sa’adat, the General Secretary of the Popular Front for the Liberation of Palestine, his comrades Ahed Abu Ghoulmeh, Majdi Rimawi, Hamdi Qur’an and Basil al-Asmar, along with Fateh veteran leader Fouad Shobaki, were seized from the PA prison after US and British guards suddenly left their posts in a violent attack by Israeli occupation forces. Today, all six of the kidnapped Palestinians remain imprisoned. Two Palestinians were killed and 23 injured by occupation forces as they waged a military assault on the prison.

The attack on Jericho prison not only reflected yet another Israeli crime against the Palestinian people and the targeting of one of Palestine’s most prominent political leaders, Ahmad Sa’adat, the General Secretary of the Palestinian leftist party, the Popular Front for the Liberation of Palestine. It also clearly indicated the joint role of imperialist powers like the United States and the United Kingdom and the devastating impact of Palestinian Authority “security coordination” with Israel.

The imprisonment of Sa’adat and his comrades in a Palestinian Authority prison had been negotiated by parties representing a full array of the forces allied against the Palestinian people, including Mahmoud Abbas, Mohammed Dahlan, Saeb Erekat, Yasser Abed Rabbo, then-Prince Abdullah of Jordan, Omri Sharon and Tony Blair. Even inside the PA prison, the imprisoned Palestinians were further held under US and British guard, reflecting the dominant role of the United States and the European Union in ensuring Palestinian Authority subservience in the framework of security coordination. Some of those British guards had played a role in imprisoning Irish republican prisoners in the North of Ireland; today, former officers from the Royal Ulster Constabulary have trained PA security forces mandated to carry out security coordination. The prisoners themselves had been seized through trickery and deception by Palestinian Authority officials, including Tawfiq Tirawi, then the PA’s security chief.

Those US and British guards deliberately left their posts in order to provide a clear path for the Israeli attack on Jericho prison. Indeed, much of the weaponry with which the Israeli occupation forces attacked the prison, destroying much of it, was US-made or US-funded. Furthermore, in 2017 we also mark 100 years of British colonialism in Palestine and the issuance of the Balfour declaration – and 100 years of Palestinian resistance, which was met with brutal repression, mass jailings, home demolitions and the execution of Palestinian freedom strugglers at the hands of British colonial authorities, who introduced administrative detention to Palestine.

In the case of al-Araj, PA President Mahmoud Abbas publicly proclaimed his arrest and that of his comrades by PA forces in April 2016 to be a major coup for security coordination, declaring publicly and non-specifically that they were “planning an attack” and were “tracked down and arrested.” They remained for five months within PA prisons without charge, before entering a hunger strike that secured their release. Today, four of the five youths imprisoned with Basil al-Araj are held without charge or trial in Israeli prisons under administrative detention. Al-Araj’s own family home was repeatedly raided and ransacked and his family members subjected to continuous summons for interrogation, before he was shot down – resisting till the last breath – in el-Bireh on 6 March 2017.

Security coordination is a devastating and daily threat to the lives and freedom of Palestinians struggling to bring an end to Israeli occupation and settler colonialism. From Ahmad Sa’adat, Ahed Abu Ghoulmeh, Hamdi Qur’an, Majdi Rimawi, Basil al-Asmar and Fouad Shoubaki to Basil al-Araj, Palestinians continue to resist under the constant threat of imprisonment and death at the hands of occupation forces, with full economic, military and political support from the US, the UK, Canada and the European Union.  There are approximately 6,500 Palestinians imprisoned today in Israeli jails. That number is supplemented by the political detainees in Palestinian Authority prisons, alongside Palestinians and strugglers for Palestine targeted for imprisonment and persecution in international prisons, from former prisoners and torture survivors like Rasmea Odeh in the United States to charity workers like the Holy Land Five to Lebanese struggler for Palestine Georges Ibrahim Abdallah, imprisoned for over 32 years in French prisons.

On the eleventh anniversary of the attack on Jericho prison, Samidoun Palestinian Prisoner Solidarity Network reiterates the call for freedom for all Palestinian political prisoners. We also reiterate and join in the demand heard loudly in the streets from thousands of Palestinians, including those in Ramallah, Dheisheh, Gaza, London, New York, Brussels, Berlin, Amman, Beirut, Rabat, Tunis, Washington DC and elsewhere seeking justice for Basil al-Araj, for an immediate end to PA security coordination with the Israeli occupation.

From Basil al-Araj to Ahmad Sa’adat, Palestinian leaders and symbols of resistance have been targeted for imprisonment and assassination with the complicity and support of governments around the world, including those of the United States, United Kingdom, Canada and European states. This anniversary is also an occasion to inspire all international movements standing with Palestine to escalate our actions to expose and put an end to that support, complicity and involvement, through building the Boycott, Divestment and Sanctions campaign, supporting Palestinian national liberation organizing and resistance, and building the struggle to free all Palestinian political prisoners and free the land and people of Palestine.