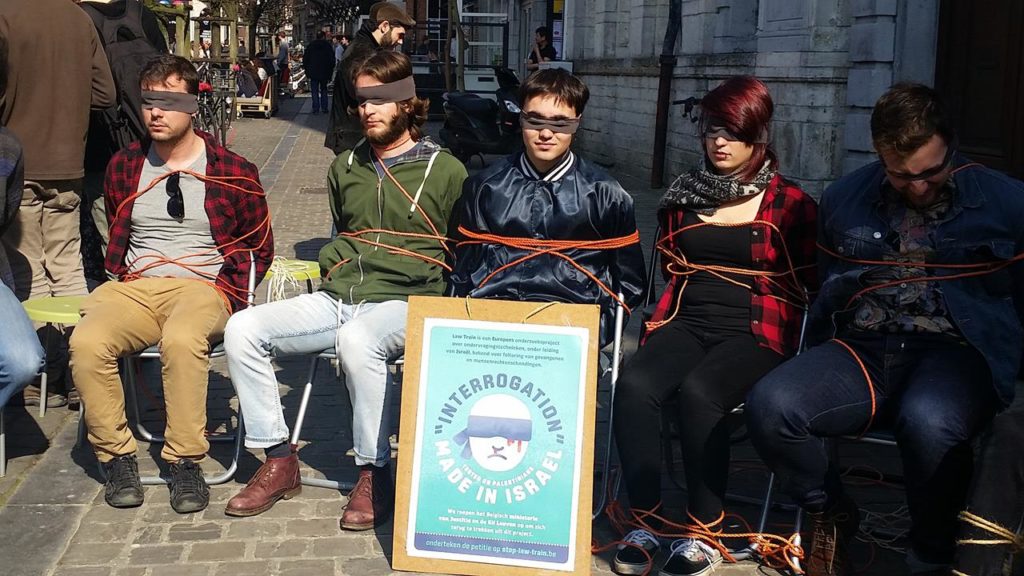 Activists gathered in Leuven’s crowded Oude Markt in the Belgian university city on Thursday, 16 March, to demand an end to participation by KU Leuven (the Catholic University of Leuven) and Belgian police and prosecutors in an EU-funded collaboration with Israeli police. Titled LAW-TRAIN, the project aims to “develop interrogation techniques.” A coalition of groups in Belgium have come together to oppose participation in LAW-TRAIN and end such collaborations with Israeli institutions through the European Union’s Horizon 2020 research fund. 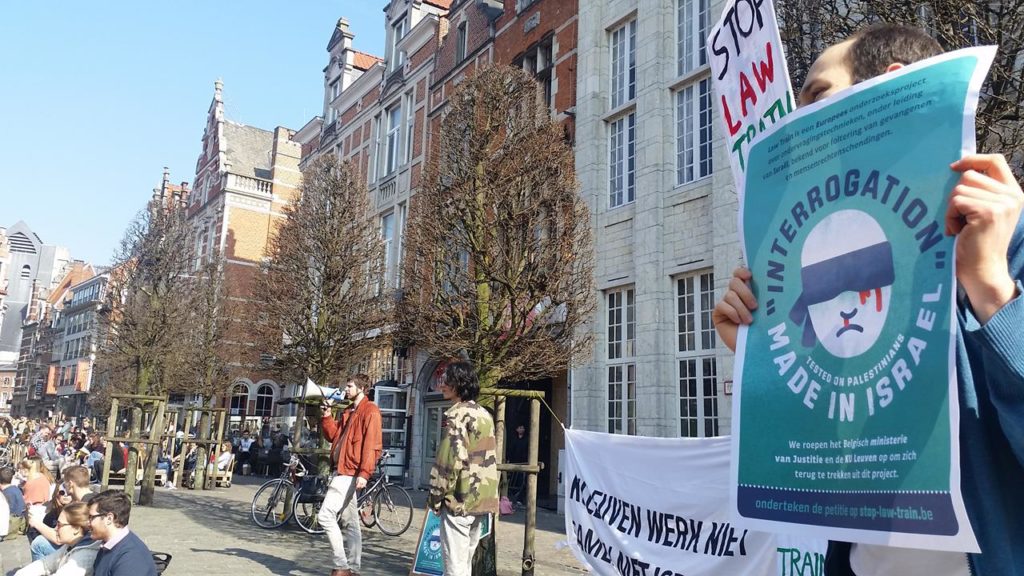 Organized by Leuven-based groups, including Comac Leuven, Intal and the Leuven Palestine Action Group, participants from a number of organizations, including Palestina Solidariteit and Samidoun Palestinian Prisoner Solidarity Network, joined in the awareness-raising street theater-style protest calling on KU Leuven’s rector, Rik Torfs, to pull out of the project. 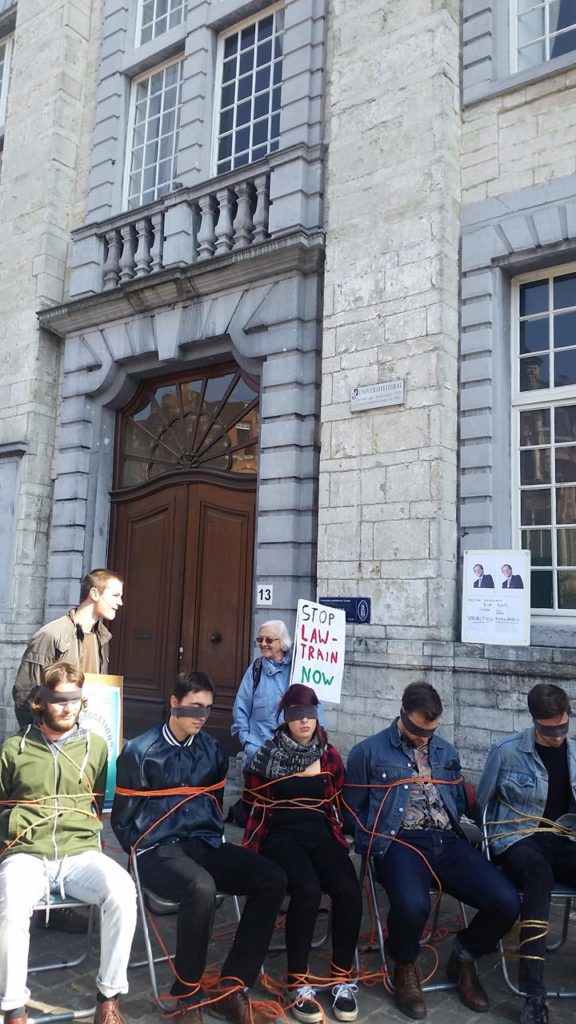 Students representing ‘detainees’ were tied to chairs in front of a university building in the square as ‘Israeli soldiers’ paced menacingly behind them. Other participants held signs and placards calling on KU Leuven to get out of the LAW-TRAIN project and support Palestinian human rights, while speakers addressed students and others in the busy square in Dutch and English about the LAW-TRAIN program and Israeli torture and ill-treatment of Palestinian prisoners. Activists distributed flyers and information and gathered signatures on the petition demanding Belgian institutions stop participating in LAW-TRAIN. 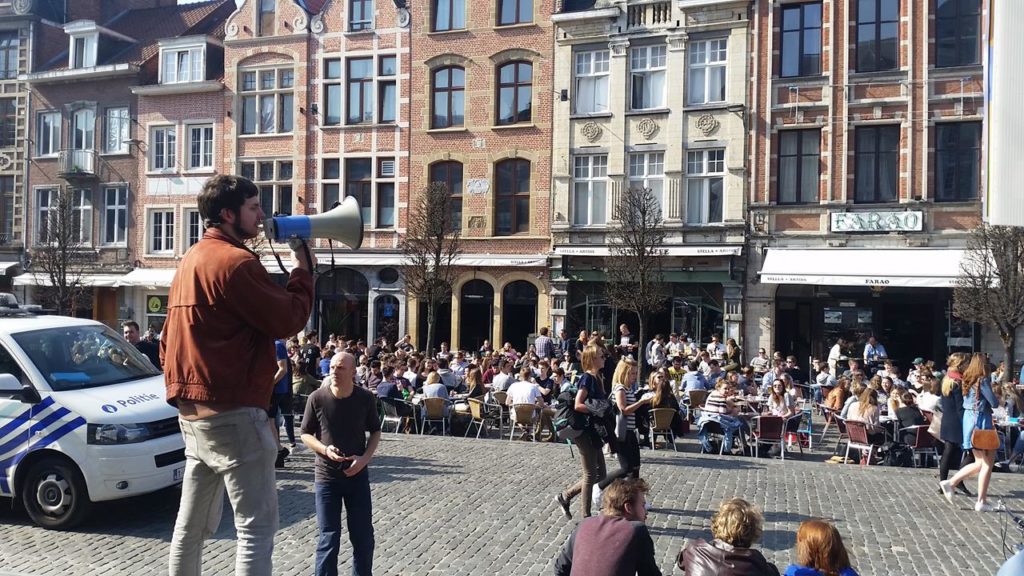 Activists across Belgium have emphasized the involvement of the Israeli police in the torture, repression and interrogation of Palestinians from Jerusalem and Palestine ’48, as well as their involvement in home demolitions and destruction of Bedouin Palestinian communities in the Naqab. The Israeli Ministry of Public Security, presided over by far-right minister Gilad Erdan, who also holds the state’s anti-BDS portfolio seeking to suppress the international campaign for boycott, divestment and sanctions, is also a partner in the project, along with Bar-Ilan University. 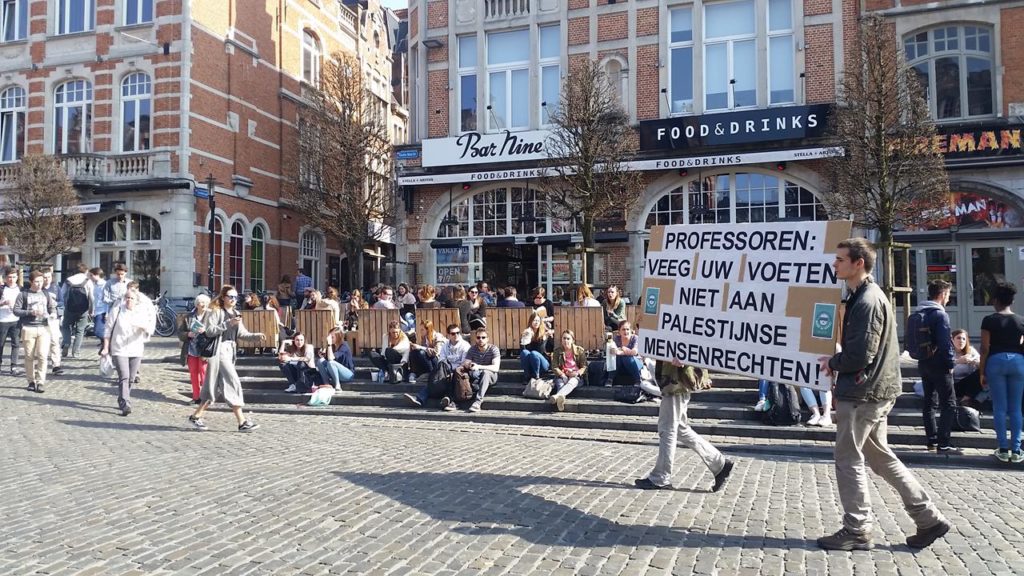 “We are protesting the collaboration between KU Leuven and, among others, the Israeli police and Bar-Ilan University. KU Leuven now has ties with the Israeli police and the Israeli security forces, who have been condemned by organizations such as Amnesty International on numerous occasions for their human rights violations and torture practices. We believe it is not OK for a university such as KU Leuven to continue this collaboration. It is condoning and accepting these human rights violations so long as this continues. We want to call on our Rector, who’s been ignoring this whole matter, to end this collaboration,” said Casper Mullie, a student of philosophy at KU Leuven participating in the protest. 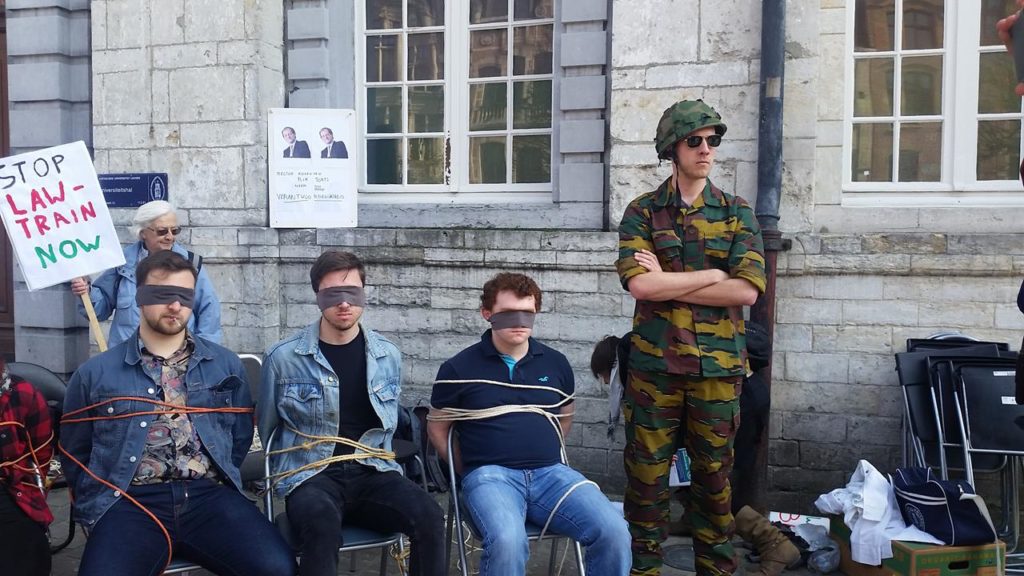 “As students, we cannot accept that our universities and institutions where we pay fees every year, to participate in projects that violate Palestinian human rights. In this case, the human rights violations are particularly egregious,” said Ibrahim, a student organizer with Rise Up who traveled from Brussels to participate in the protest in Leuven. 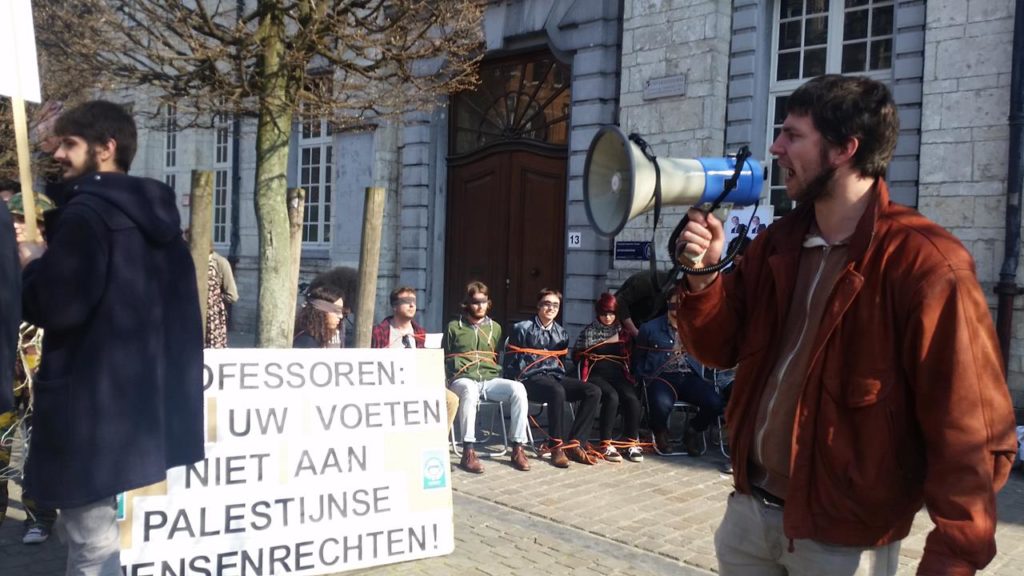 Hundreds of Belgian academics and cultural workers have signed an open letter organized by BACBI,
the Belgian Campaign for the Academic and Cultural Boycott of Israel, calling on the Belgian government and universities to break with the project. In addition, a delegation of high-profile Belgian lawyers and human rights experts traveled to Palestine to study the use of torture by Israeli police and security forces. Israeli Apartheid Week events organized by students at campuses across Belgium had a strong focus on Palestinian prisoners and the campaign to stop LAW-TRAIN. 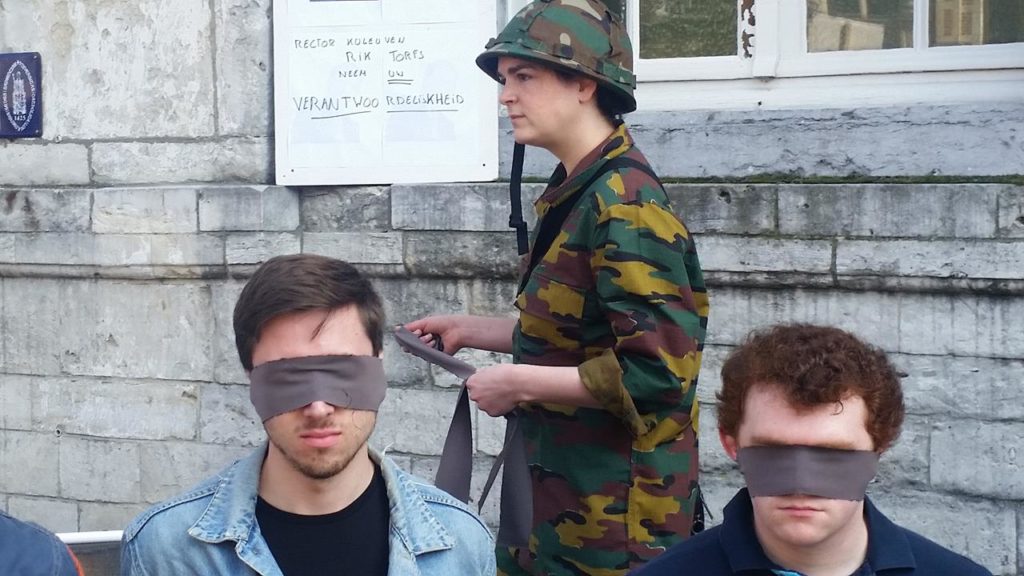