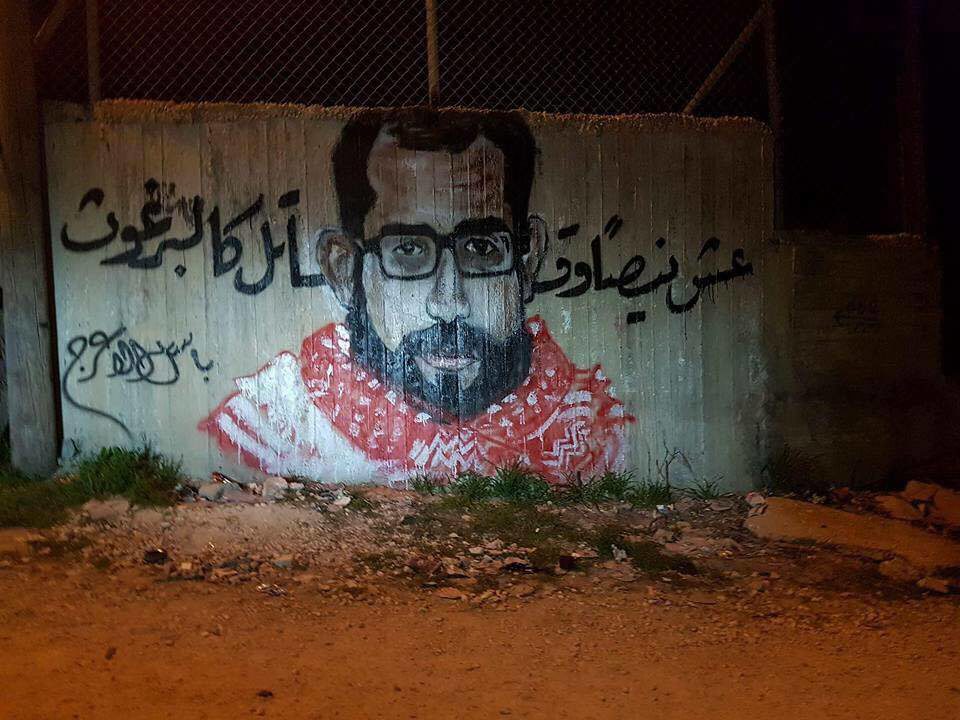 Slain Palestinian youth leader Basil al-Araj will be buried today in his hometown of al-Walaja near Bethlehem in a mass funeral. His body has been held captive by Israeli occupation forces since 6 March, when they killed him as he resisted their invasion of the home where he was staying in El-Bireh.

Al-Araj’s family announced that occupation forces will turn over his body at 4:00 pm local time in Palestine and that his funeral ceremony will begin the moment that his body is returned. Prayers will be held adjacent to the family home in the street, and only Palestinian flags will be carried in the funeral procession to the cemetery, where he will be buried. Condolences will be accepted by the family in al-Araj’s parents’ home. His body will be returned without conditions, after an ongoing struggle for 11 days to demand the return of the captive body as occupation forces attempted to impose numerous conditions upon the funeral.

Palestinians called for broad participation in the funeral and organizers throughout Palestine planned to travel to join in the mass tribute to al-Araj’s life and confrontation of the occupation.

Additional organizations, including the Popular Front for the Liberation of Palestine, the Palestinian leftist political party, urged simultaneous mobilizations and the organizing of symbolic funerals, saying that “the organizing of symbolic funerals in Palestine and in exile represent a tribute to the martyr, upholding his values and principles as a leader among young Palestinians, dedicated to the culture of resistance as a way of life and as a means of resisting the occupation and all of its projects.”

Samidoun Palestinian Prisoner Solidarity Network is organizing a protest in New York City today, Friday, 17 March, to protest the murder of Basil al-Araj and Israeli policies of imprisonment and assassination. Protesters will gather at 5:30 pm at Union Square Best Buy, 52 E. 14th Street, in New York City. All are welcome to attend the protest, participate in the demonstration and demand justice for Basil al-Araj.

Al-Araj was shot down by Israeli occupation forces on Monday morning, 6 March, resisting until the end. The prominent youth activist had gone underground following his release from a Palestinian Authority prison after a hunger strike; al-Araj and five of his comrades had been arrested by PA security forces in April 2016 in a case touted at the time by PA President Mahmoud Abbas as an important achievement for PA/Israel security coordination. They were tortured and imprisoned for five months without charges before being released after a hunger strike. Four of Basil’s comrades, Haitham Siyaj, Mohammed Harb, Mohammed al-Salameen and Seif al-Idrissi, have now been seized by Israeli occupation forces and are held without charge or trial under administrative detention.

Following his assassination, Palestinians have taken the streets in Palestine and internationally to demand justice for al-Araj and an end to PA security coordination with Israel, including in New York, Washington, Brussels, Berlin, London, Vienna, Gaza City, Haifa, Nahr el-Bared refugee camp, Dheisheh refugee camp and Ramallah. The Ramallah and Dheisheh protests were violently attacked by PA forces in an attempt to suppress them, sparking growing demands against the PA’s continued involvement with the imprisonment of Palestinians for the benefit of the occupation.