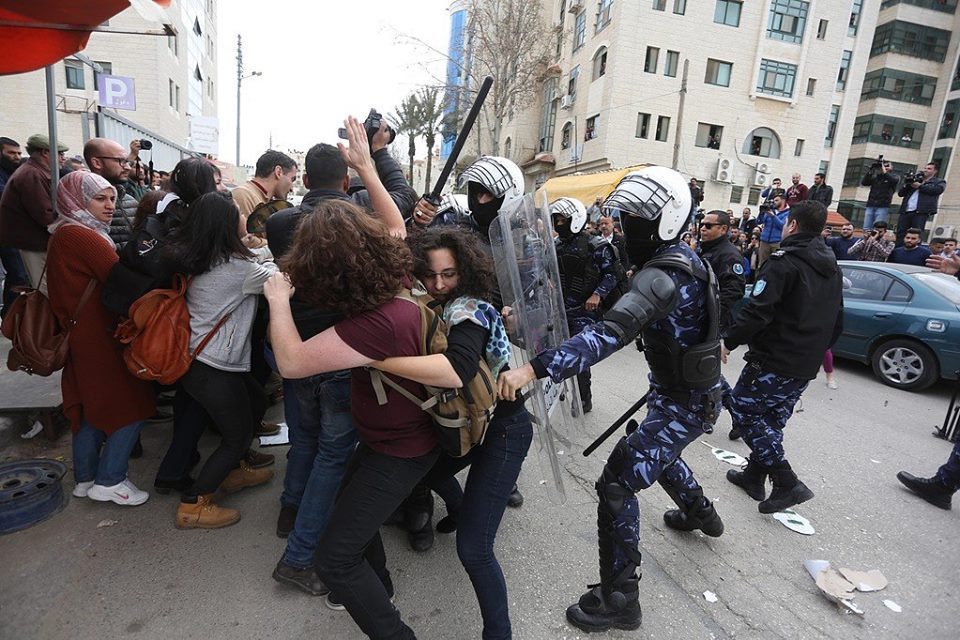 Protesting Palestinians in Ramallah came under attack by Palestinian Authority security forces this morning, including the father of slain Palestinian youth activist Basil al-Araj, journalists and former prisoners, such as Khader Adnan.  Later in the evening, PA police also attacked a march in Dheisheh refugee camp near Bethlehem demanding an end to security coordination and honoring al-Araj.

The demonstration was called in protest of PA security coordination with the Israeli occupation, under which al-Araj and his comrades were initially imprisoned by the PA after a court hearing was maintained for charges against al-Araj and his comrades for Sunday, 12 March. Their arrest was touted as a significant achievement for PA-Israeli security coordination in April 2016.

Al-Araj was shot down by Israeli occupation forces on Monday morning, 6 March, resisting until the end. The prominent youth activist had gone underground following his release from PA prison after a hunger strike; four of his five comrades imprisoned with him have since been seized by Israeli occupation forces and ordered to administrative detention without charge or trial. All six were charged by the Palestinian Authority with “unlicensed possession of a weapon.” Despite the imprisonment of four of the young people – Haithem Siyaj, Mohammed Harb, Mohammed al-Salameen and Seif al-Idrissi – and the assassination of al-Araj, the trial was scheduled to go forward as planned, sparking calls for protest and action.

Ma’an News reported that at the hearing in the Ramallah Magistrate’s Court, only the sixth former PA prisoner, Ali Dar al-Sheikh was present. Lawyer Muhannad Karajah had previously requested that charges be dropped against the four imprisoned Palestinians, and that the judge requested documented proof that the four were held in Israeli prison. When Karajah presented that proof in the court session today, rather than dropping the charges, the judge rescheduled the trial for 30 April, reportedly stating that “the four may be out of Israeli prison” by that time, as they are imprisoned without charge or trial under administrative detention. Further, Karajah said, the judge dropped charges against al-Araj only when his death certificate was presented in court, as the charges “expired” upon his death.

Palestinians protesting outside denounced the trial, which was also condemned by a number of Palestinian political organizations, including Hamas and the Popular Front for the Liberation of Palestine. The protesters were violently attacked by PA police shooting tear gas canisters directly into the crowd, using rubber bullets, and hitting protesters with batons. At least 11 were injured, including Mahmoud al-Araj, the father of Basil al-Araj, who was taken to hospital after being beaten amid shouts from participants that he was the father of the martyr. Several more were detained for a few hours, including former hunger striker Khader Adnan.

Multiple journalists reported that they were barred from covering the protest and some reported the breaking of their equipment, including reporters for Palestine TV, Watan and Roya TV. The attack on journalists was condemned by the Palestinian Journalists’ Syndicate and several other media organizations. Palestinian human rights organizations and NGOs also widely condemned the attack on the protest, urging accountability for the security forces.

Speaking several hours later, Mahmoud al-Araj spoke at a press conference alongside Adnan, saying that the attack on the protest was an attack on his son the martyr, as well as a violation of the rights of the people and of the freedom fighters. He noted that a sit-in was being called for 4 PM tomorrow, Monday, 13 March in response to the attack on the demonstrators today. He also said that he would file a complaint against the security services, with lawyer Karajah. Farid al-Atrash, of the Independent Human Rights commission, said that the events today were a crime, and that anyone who gave orders for the attack on civilians must be held accountable.

Shortly after he spoke, a march in Dheisheh refugee camp near Bethlehem demanding an end to security coordination in honor of al-Araj was attacked by PA police, who fired on the crowd with rubber bullets and shot tear gas canisters into the march. People in the camp reported that a child was injured by rubber bullets fired by PA police inside the camp. 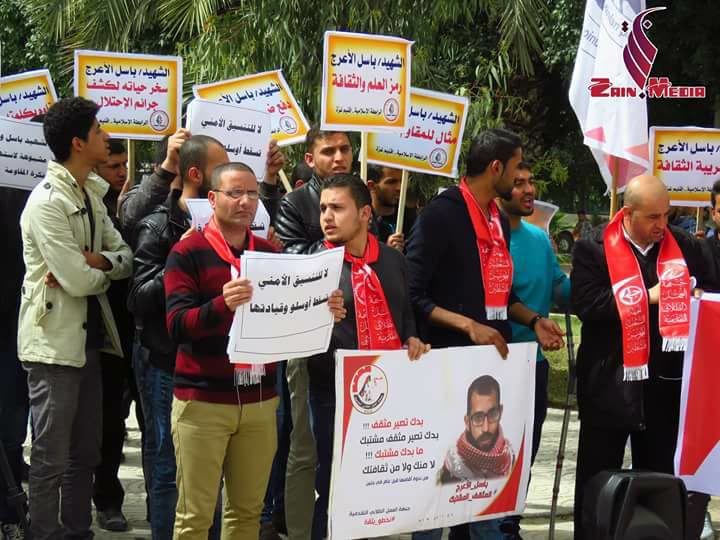 The protests were accompanied by actions elsewhere in Palestine and in Arab and international cities. In Gaza City, student organizations gathered to denounce the assassination of al-Araj and demand the Palestinian Authority stop security coordination and arrests against the Palestinian resistance. 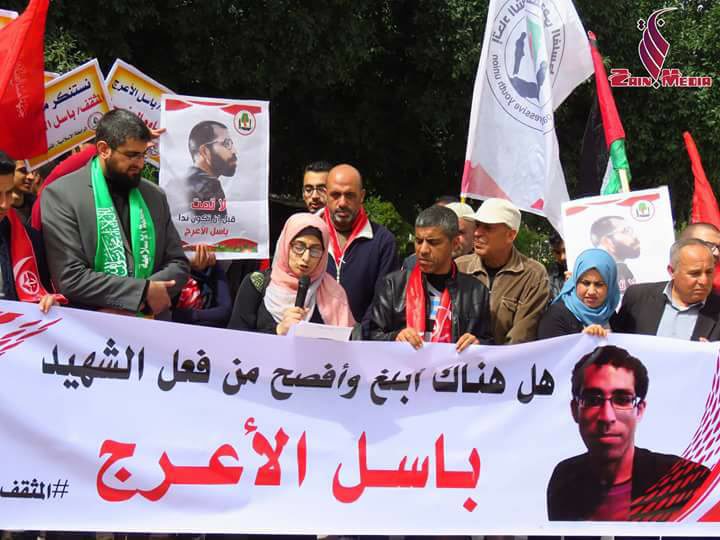 In London, protesters gathered outside the Palestinian Mission, demanding an end to security coordination and attaching a large banner bearing Basil’s image to the building’s railing. The protesters, mainly young Palestinians, recalled al-Araj’s life and commitment to struggle and denounced the PA’s role in his arrest, persecution and eventual assassination. 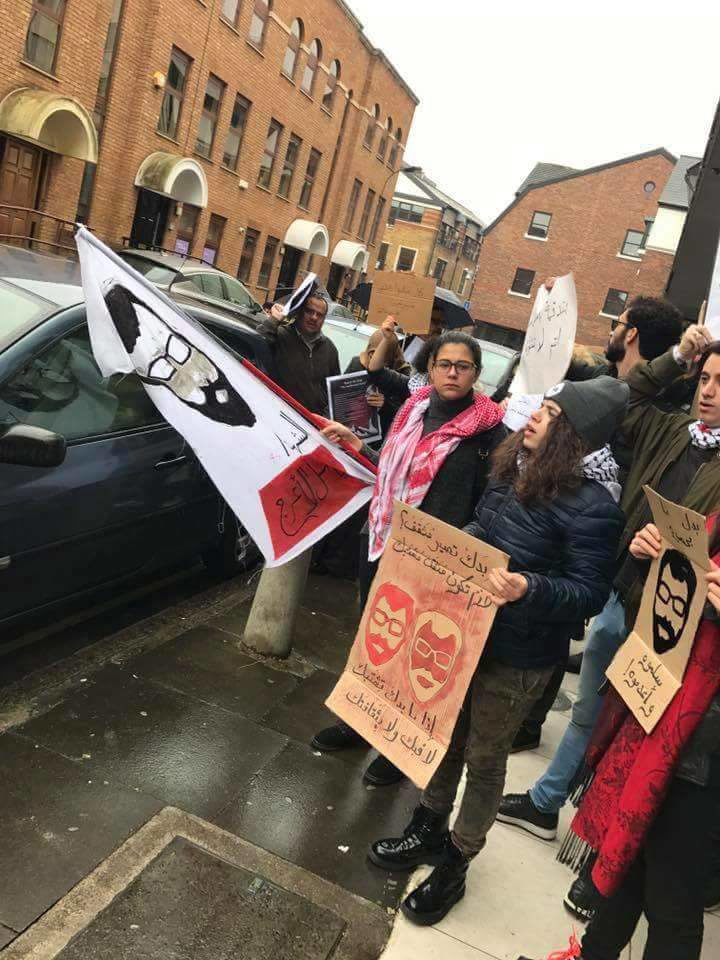 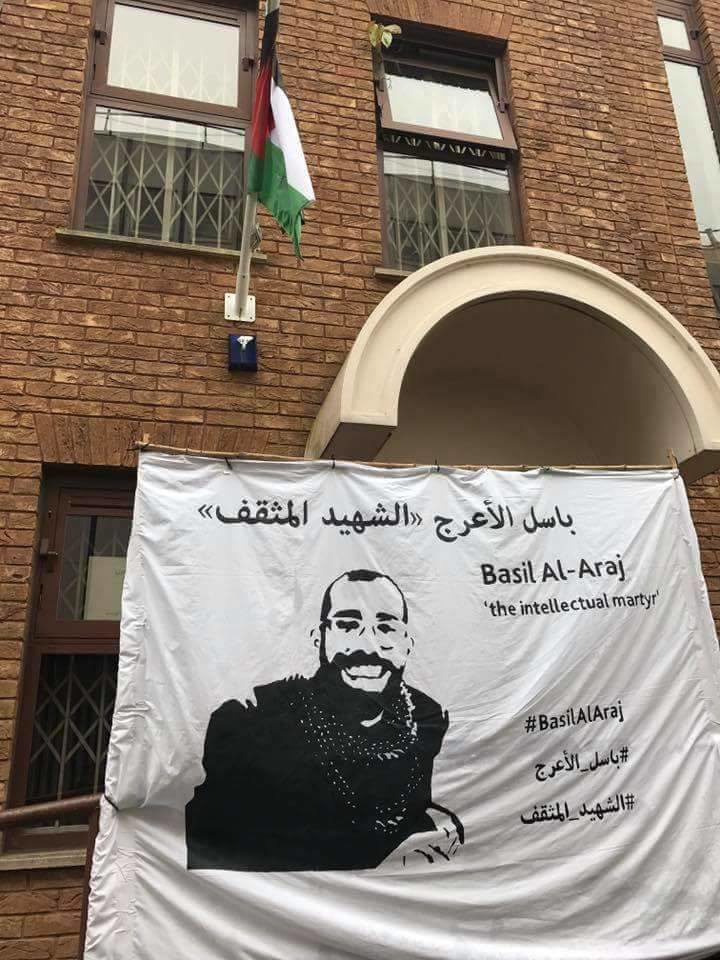 Meanwhile, in Brussels, demonstrators came together outside the Palestinian Mission to the EU, Brussels and Luxembourg to denounce PA security coordination and remember al-Araj. Several protesters were personal friends of al-Araj, and recalled their interactions and experiences with him as well as his commitment to struggle. One participant, Hala, recalled her own interactions with al-Araj while reviewing today’s events in Ramallah. Writer and researcher David Cronin discussed in detail the role of the European Union and the United States in PA security coordination with the Israeli occupation, while Charlotte Kates of Samidoun noted the connection of security coordination with the imprisonment of Palestinians in Israeli jails. 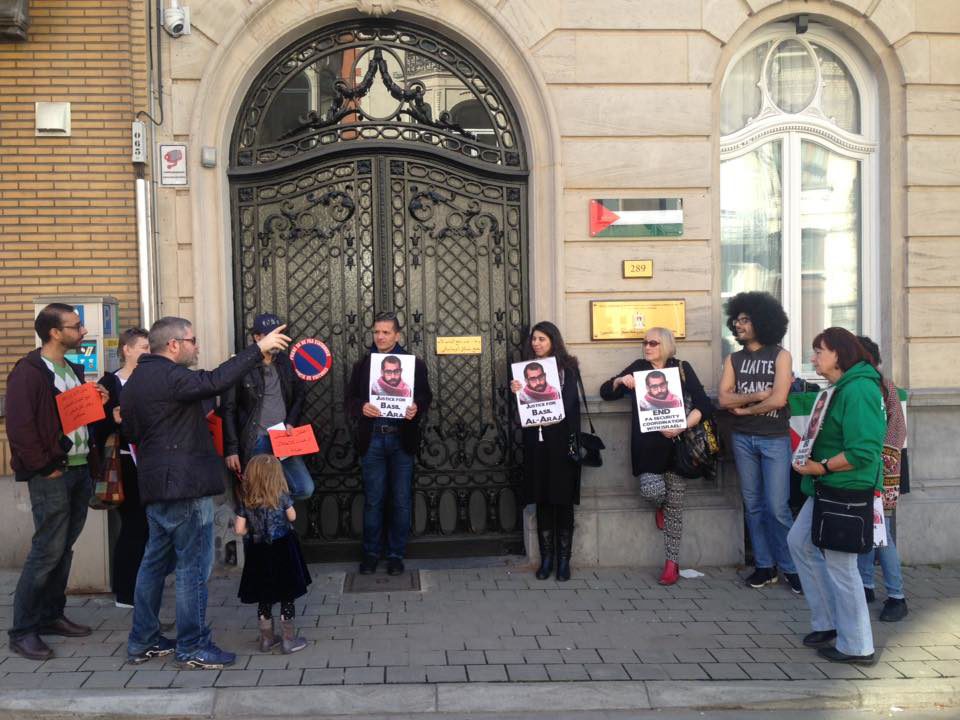 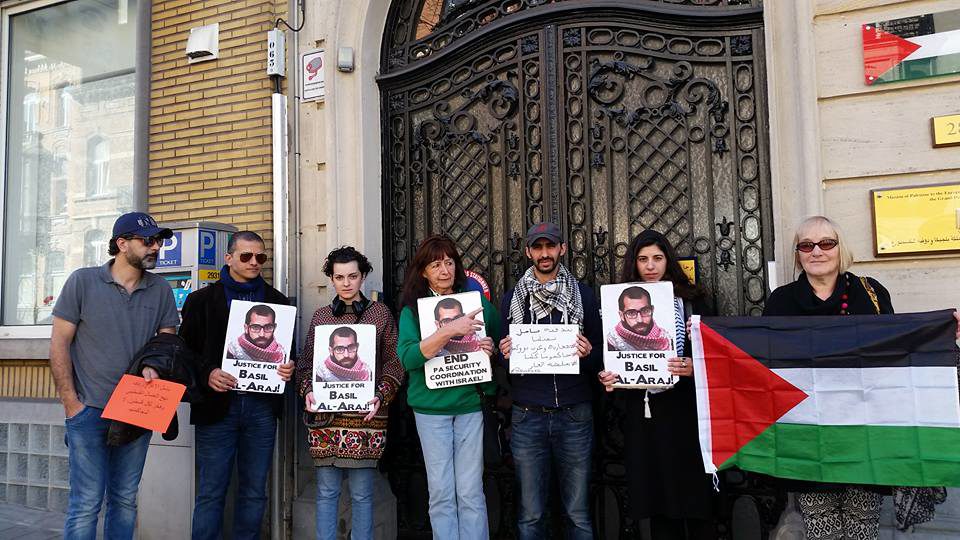 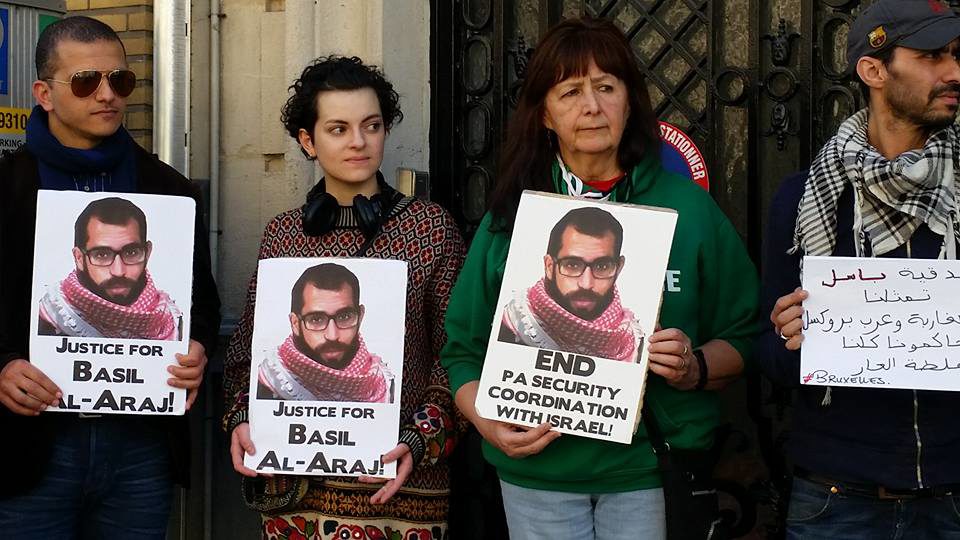 In Berlin, Palestinian activists gathered outside the Palestinian mission to Germany to denounce the PA’s ongoing security coordination with Israel and demand real action after the killing of al-Araj. 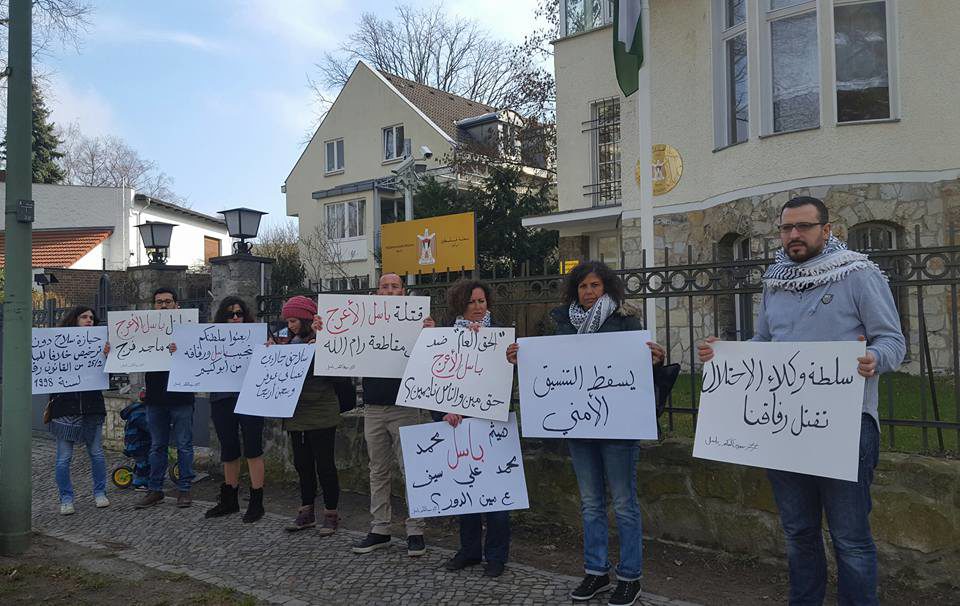 Meanwhile, in Amman, protesters gathered outside the Palestinian Embassy, waving their shoes at the embassy and holding signs and posters saluting al-Araj as they demanded an end to security coordination. 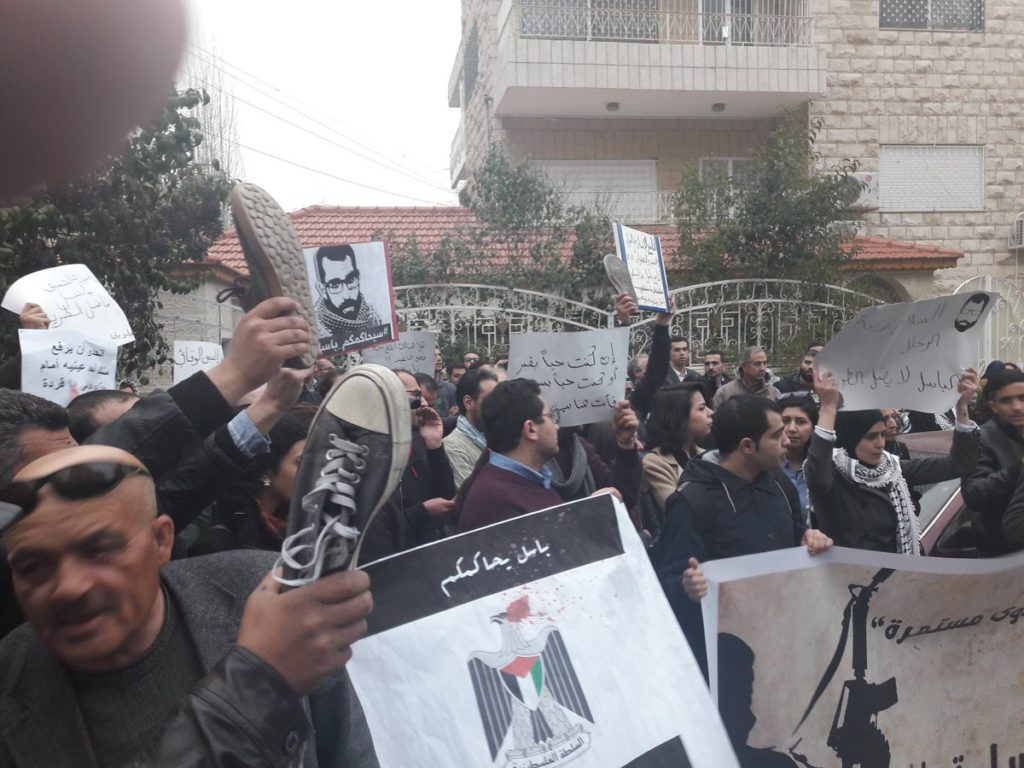 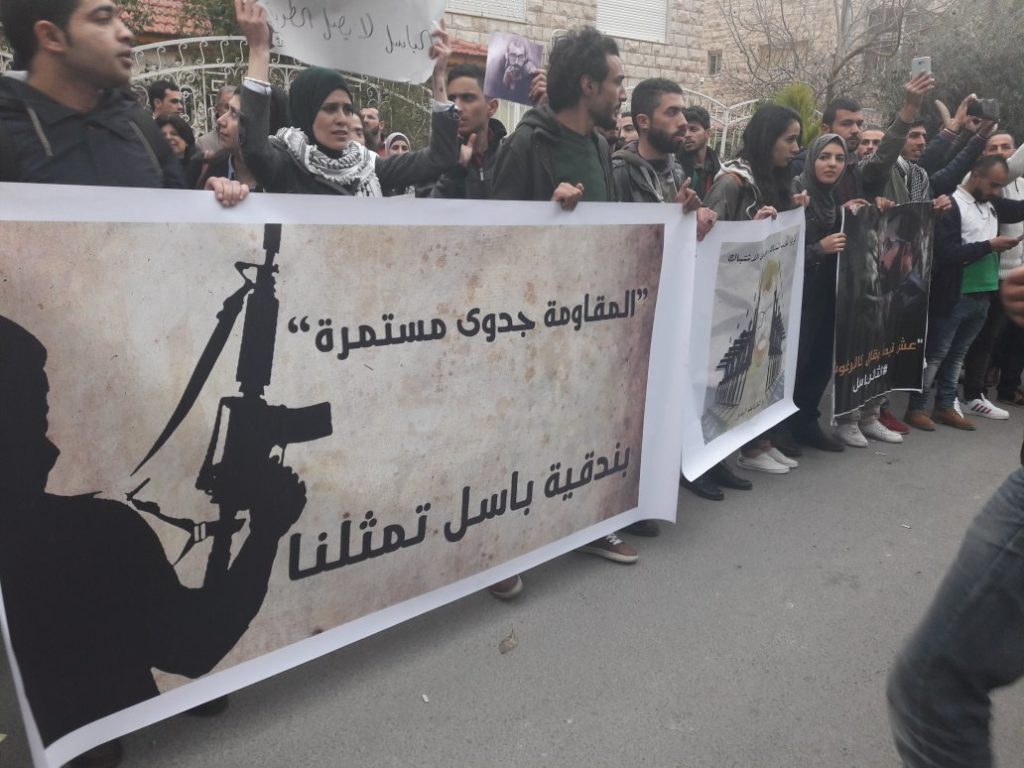 Protesters also gathered in Beirut, Tunis, Vienna and Rabat. More protests are being organized, and two will take place on Monday, 13 March in New York City and Washington, DC.