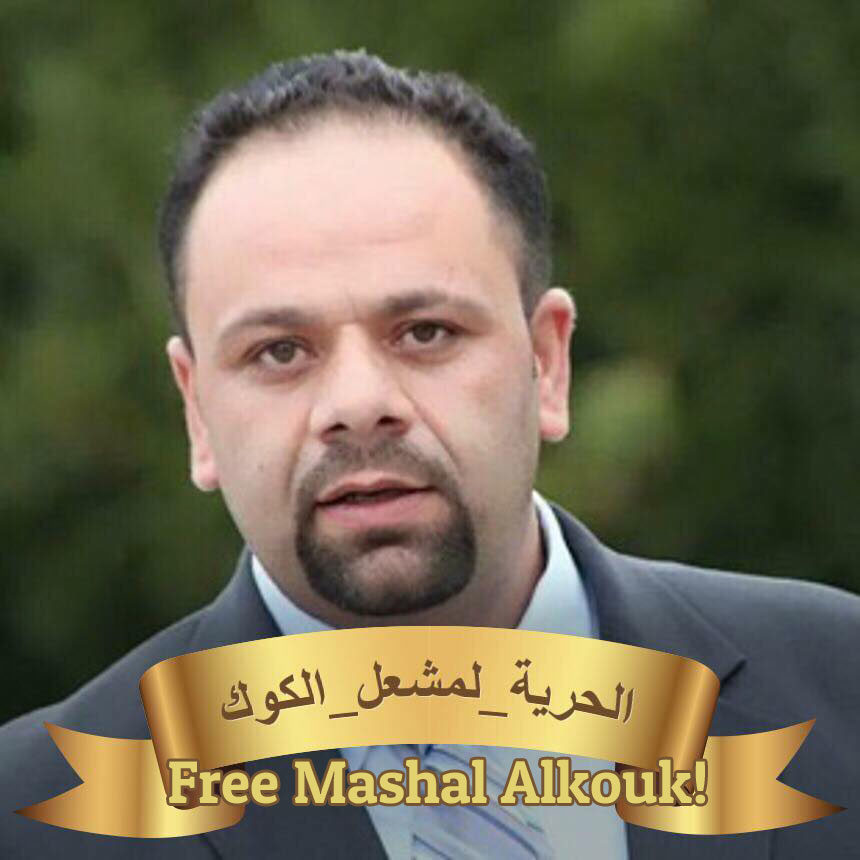 UPDATE, 23 August: Mashal Alkouk has been freed by Palestinian Authority forces, according to the Palestinians in the U.S.A. Facebook page. Thank you for your support and action!

Palestinian American organizer Mashal Lafi Alkouk, the admin of the Palestinians in the U.S.A. Facebook page  has been seized by Palestinian Authority security forces on 19 August 2017 while he was in Turmusayya, a village near Ramallah, attending a family wedding. Alkouk, a U.S. citizen, is the latest Palestinian to be seized by the PA for posting critically about PA president Mahmoud Abbas (Abu Mazen) and PA security forces on Facebook, especially in relation to their ongoing security coordination with the Israeli occupation at the expense of the Palestinian people. We urge supporters of Palestine and Palestinian communities to take action and demand the PA immediately free Mashal Alkouk.

“We as Palestinian and Arab activists for the Palestinian cause in Chicago and in the United States strongly condemn this arrest and consider it a flagrant violation of individual freedoms and freedom of expression. We demand that the security services realign their relationship to the national cause and arrest the agents and traitors rather than the activists and leaders,” demanded the statement.

The Skyline International Foundation, a campaign against censorship, also condemned the arrest and demanded his immediate release, noting that “the background of his arrest is his criticism of the Palestinian Authority’s policy of security coordination with Israel.”

The arrest of Alkouk is only the latest violation of Palestinian rights carried out by the PA under the framework of the “Electronic Crimes Law,” an order that has been widely condemned by political parties and organizations throughout occupied Palestine.  The PA law, which attempts to criminalize Palestinian political expression on Facebook and in the media, comes alongside systematic Israeli attacks on Palestinian expression, including the persecution of hundreds of Palestinians for their posts on social media and the jailing of teens, journalists and elders in Israeli occupation prisons.

The “Electronic Crimes Law” goes so far as to threaten sentences of hard labor against people convicted of committing “offenses” with the “purpose of disturbing public order…or harming national unity.” Addameer Prisoner Support and Human Rights Association has published a lengthy analysis of the dangers posed by the law.

Samidoun Palestinian Prisoner Solidarity Network denounces in the strongest terms the arrest of Palestinian American activist Mashal Alkouk. In Chicago, Alkouk is always on the front lines of community organizing, whether participating in demonstrations against Israeli attacks on Gaza or organizing a solidarity tent for Palestinian prisoners on hunger strike in Israeli jails in the heart of the Palestinian community. We express our full support for Mashal Alkouk and demand his immediate release and the freedom of all political detainees.

In addition, we join and support the Palestinian calls to cancel the dangerous and unlawful “Electronic Crimes Law” and the ongoing attacks on Palestinian websites, journalists and activists. This law is particularly chilling in light of the ongoing Israeli targeting of Palestinian journalists, writers and organizers for expressing their opinion on social media and the context of PA security coordination with the Israeli occupation.

1. Email the Palestinian Embassy or PLO Mission in your country. Click here for a list of contact information.  You can email the Ambassador to the PLO Delegation to the U.S., Husam Zomlot, at info@plodelegation.us and the Permanent Observer of Palestine to the United Nations, Riyad Mansour, at palestine@un.int. Make it clear that Palestinians around the world and international friends of Palestine stand together to confront occupation, end security coordination, and free Mashal Alkouk and fellow political detainees.

2. Call the Palestinian Embassy or PLO Mission. This is a case where phone calls can make a real difference! Palestinians and internationals around the world can raise their voice and demand action. Phone numbers for some missions follow: