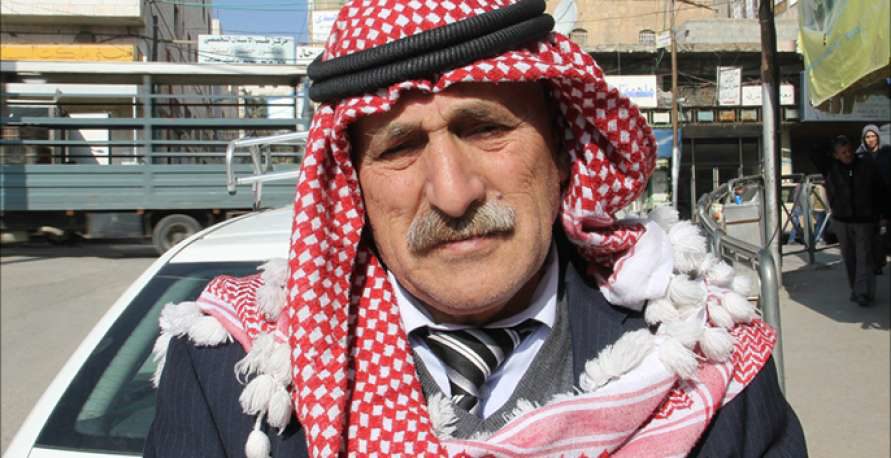 Prominent Palestinian leftist leader Badran Jaber was among 25 Palestinians seized overnight by attacking Israeli occupation forces. Jaber, 69, is a former political prisoner, the father of several political prisoners and a longtime leader in the Popular Front for the Liberation of Palestine.

He has lived a lifetime of struggle, including many years as a Palestinian prisoner in Israeli jails, and remains not only a prominent political leader but an active participant in numerous popular events and activities, including tents of support for the prisoners. Five of his children, Ghassan, Nasser, Fadi, Tahrir and Wadie, have been imprisoned by the Israeli occupation for various periods of time; Ghassan was recently released after 21 months of administrative detention, imprisonment without charge or trial, and has spent a total of over six years in Israeli prisons.

He was a founding member of the PFLP and its student branch and has spent many years in administrative detention; he has a long history of participation in hunger strikes and was one of the first prisoners to enter the Negev desert prison immediately after it was opened in 1988.

“The official Israeli policy is to try to break the human spirit of Palestinians by refusing to recognize their human rights inside and outside of prisons. What distinguishes Bilal Kayed and his comrades from people outside of prisons is the immediacy with which they face the occupation and its full control over them. In those moments, he and others are given the choice of abandoning their Palestinian-ness or risking death in the pursuit of freedom. Bilal Kayed is not facing this choice alone. We currently have 50 prisoners on open-ended hunger strikes … So what the Israelis need to understand about their detention policies is that prisoners become, first off, heroes of the national liberation struggle. These heroes form the base of a leadership that articulates the alternative to this close collaboration with the occupation,” said Jaber in 2016 in an interview with the Alternative Information Center.

The Human Rights Defenders organization published a video of Jaber during the April-May 2017 hunger strike in support of the strikers at a support tent in al-Khalil:

He is a teacher and educator and is known as a vocal and sharp critic of the Palestinian Authority, particularly its “security coordination” with the Israeli occupation.

In Kobar, near Ramallah, occupation forces stormed the village and imposed a blockade, deploying snipers on rooftops of homes in the village and arresting Abdel-Jalil al-Abd and Ibrahim al-Abd, the father and the uncle of Omar al-Abd, who carried out an armed attack at the illegal Halamesh settlement. Invading occupation forces also excavated land around the family’s home, declaring their intention to demolish it.

Samidoun Palestinian Prisoner Solidarity Network demands the immediate release of Badran Jaber and all Palestinian prisoners inside Israeli jails. We urge supporters of Palestine around the world to protest and escalate campaigns of boycott, divestment and sanctions to demand freedom for Badran Jaber and his fellow 6,200 Palestinians behind Israeli bars.