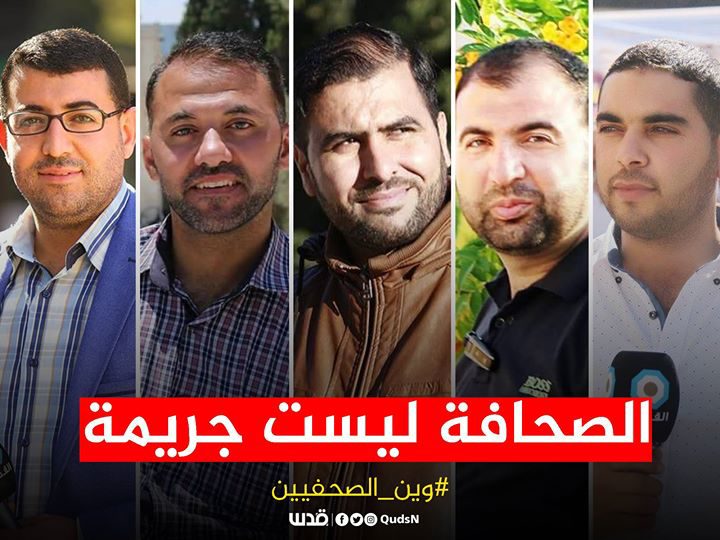 The Palestinian Authority’s intelligence services have launched a campaign of arrests against a number of Palestinian journalists in the West Bank on Tuesday, 8 August. Five journalists were seized by PA intelligence agents, including Qutaiba Qasem and Mamdouh Hamamreh in the Bethlehem governorate, Amer Abu Arafa and Ahmed Halaiqa in al-Khalil and Tareq Abu Zeid in Nablus.

Hamamreh, a correspondent for al-Quds TV, was arrested when PA forces broke into the studio in Husan, west of Bethlehem. His colleague, Qasem, was called for interrogation at the headquarters of the security services after they encircled his home, demanding that he turn himself over.

Abu Arafa is the correspondent of the Shehab News Agency; when he was seized, his cellular phones and computers were also taken. Halaiqa, also seized in al-Khalil, reports for al-Quds TV.

Abu Zeid was arrested from his home in Nablus; he is a correspondent for Al-Aqsa TV. Meanwhile, the journalist Islam Salem was summoned for interrogation.

These arrests come as the latest in a series of attacks by PA security forces on journalists, writers and other critical voices, including detentions of journalists and banning of over 20 websites inside the West Bank, generally Palestinian news sites with differing political perspectives from the PA’s leadership.  Many of those targeted have been particularly critical of Palestinian Authority “security coordination” with the Israeli occupation and the “revolving door” between PA detention and Israeli prisons.