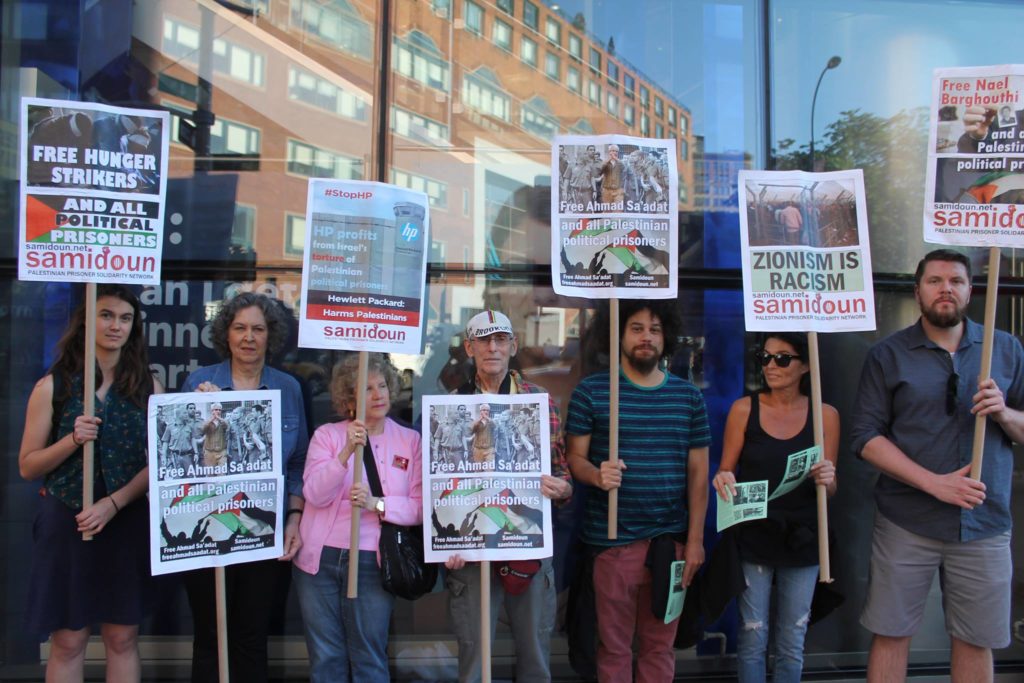 Ahmad Sa’adat is the General Secretary of the Popular Front for the Liberation of Palestine and a member of the Palestinian Legislative Council. One of over 6,000 Palestinian political prisoners, he has been sentenced to thirty years in Israeli prisons for a range of “security-related” political offenses. These charges include membership in a prohibited organization (the PFLP, of which Sa’adat is General Secretary), holding a post in a prohibited organization, and incitement, for a speech Sa’adat made following the Israeli assassination of his predecessor, Abu Ali Mustafa, in August 2001.

Born in 1953, Sa’adat is the child of refugees expelled from their home in the village of Deir Tarif, near Ramleh, in 1948. A math teacher by training, he is married to Abla Sa’adat, herself a noted activist, and is the father of four children. Abla Sa’adat was herself arrested and detained for four months, and prevented from leaving Palestine to speak about Palestinian rights at an international conference. He has been involved in the Palestinian national movement since 1967, when he became active in the student movement. Prior to his abduction from Jericho in 2006, he had been held at various times as a political prisoner in Israeli jails, for a total of ten years. Sa’adat was elected General Secretary of the PFLP in 2001, following the Israeli assassination of then-General Secretary Abu Ali Mustafa in his office in Ramallah on August 27, 2001.

Sa’adat had been held in a Palestinian Authority prison for over four years, and, in January 2006, elected to the Palestinian Legislative Council on the Abu Ali Mustafa slate, when on March 14, 2006, the Israeli military stormed that prison at Jericho, abducting Sa’adat and five fellow prisoners and taking them to Israeli military prisons. For the entire period of Sa’adat’s imprisonment in the PA jails, he had been convicted of no crime. His sentencing – in an illegitimate military court of occupation, on December 25, 2008 – came nearly seven years into his detention, after a trial that began after five years of PA/US/British, then Israeli, imprisonment.

This trial was, of course, a military trial, as are the trials of nearly all Palestinian political prisoners, presided over by three military judges, two of which are not required to have any legal background. These trials are based on military law, including military regulations that may be issued at any time by the Israeli military commander over the area. This military rule under occupation dates from the era of the British occupation of Palestine, in which these “emergency” military rules were adopted in order to suppress the Palestinian national movement for independence and self-determination. These military laws continue today for the same purpose – to continue a military occupation and suppress the indigenous people of Palestine’s struggle for liberation and self-determination. Such military trials generally fail to uphold international standards for fair trials. At a more basic level, they are an illegitimate manifestation of an illegitimate system – trials that, by their very nature, can never be fair or legitimate.

Sa’adat is the child of 1948 refugees who, with six million others in Palestine, in the camps outside Palestine and in exile around the world, are denied their right to return to their homes, lands and properties and denied their right to organize, struggle and act to obtain their freedom, their return and their liberation.

Stand with Sa’adat and demand that Israel release him, twelve other imprisoned members of the Palestinian Legislative Council and all 6,279 Palestinian political prisoners and end its occupation of Palestinian land, and that Hewlett Packard companies end their contracts with Israeli prisons and detention centers, occupation and security forces, and checkpoints and settlements.