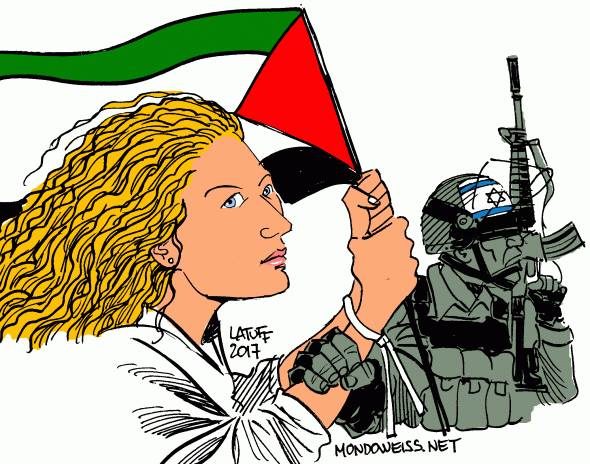 Protest against Israel’s detainment and torture of Palestinian children in Israeli jails!

Israel has just charged 16 year old Ahed Tamimi, a young Palestinian girl who spent the Christmas period and New Year in Israeli prison and remains imprisoned by an illegal occupying force. Since she was 9 years old Ahed, along with her family and community have faced up to the Israeli soldiers during protests against Israel’s seizure of their land and only water source in their village Nabi Saleh. Right now she remains in an Israeli prison cell for challenging Israeli soldiers in her own court yard, the same day her fifteen year old cousin had earlier been shot in the face and was sitting in an induced coma in hospital. Her mother Nariman and cousins have also been detained.

Resisting Israel’s brutal and illegal military occupation of Palestine is a duty not a crime. Join the Protest in Manchester this Saturday and call for the release of all Palestinian child prisoners and all Palestinian political prisoners. End Israel’s take over of Jerusalem and all of Palestine!