Palestinian teen and youth activist Ahed Tamimi, 16, whose arrest and detention by the Israeli occupation military has drawn worldwide attention, was charged in an Israeli military court with multiple allegations on Monday, 1 January. Her mother, Nariman, was also charged with several allegations related to the Tamimi family’s anti-occupation organizing and expression; the detention of both Ahed and her mother was extended for an additional eight days, until next Monday, when the military court will convene again.

Ahed was charged with “assault” for slapping an Israeli occupation soldier outside of her home in Nabi Saleh – after the soldier slapped her – and for “threatening a soldier…interfering with a soldier in carrying out his duties, incitement, and throwing objects at individuals or property.” Nariman Tamimi was charged with “incitement” on social media for streaming Ahed’s encounter with the occupation soldiers at the family home in Nabi Saleh on Facebook Live and for her other political expression on social media, as well as assaulting soldiers. The Tamimi women and their family are leaders in the anti-colonial land defense and popular resistance movement in the Palestinian village of 600. The village is surrounded by the illegal settlement of Halamish, which has stolen the village’s land and even its spring. 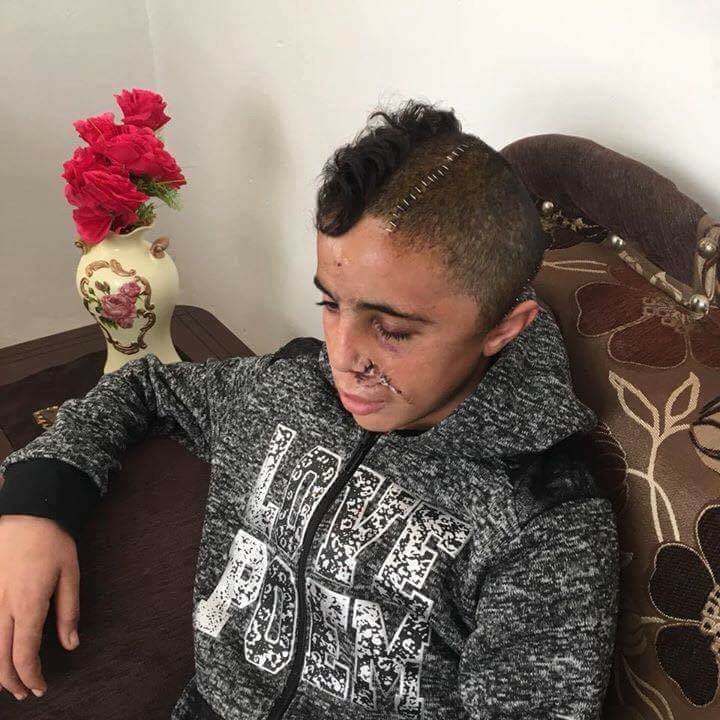 The incident itself took place shortly after Mohammed Tamimi, 14, Ahed’s and Nour’s cousin, was shot by an Israeli occupation soldier invading their village with a rubber–coatled metal bullet. Mohammed was in a medically induced coma in critical condition for several days and is now released from the hospital after a six-hour operation by seven surgeons on his face and head.

Nour Tamimi, 21, Ahed’s cousin, was also indicted by the Israeli occupation military court on Sunday, 31 December; she was initially ordered released on bail, then remained in prison due to an appeal by the military prosecution. On Monday, she was ordered released once more, but the decision was stayed for 20 hours to give the occupation military prosecution time to appeal once again. Nour is accused of “aggravated assault on a soldier” and “interference with a soldier.”  She is being ordered to present herself every Friday to an Israeli police station, potentially intended to deter her from participating in Nabi Saleh’s weekly protests. 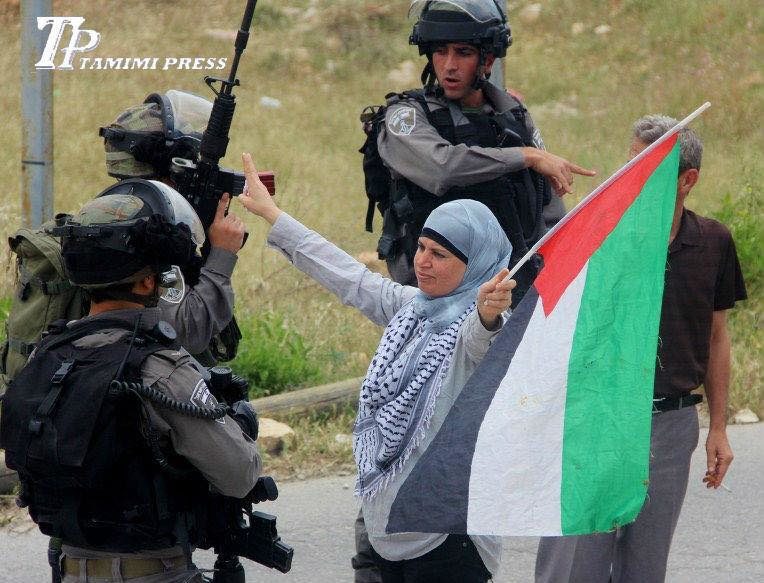 Bassem Tamimi, Ahed’s father and Nariman’s husband, wrote a piece in Ha’aretz about his daughter’s case and participation in struggle from a young age despite her and her family’s desire to enjoy childhood. “My daughter is just 16 years old. In another world, in your world, her life would look completely different. In our world, Ahed is a representative of a new generation of our people, of young freedom fighters. This generation has to wage its struggle on two fronts. On the one hand, they have the duty, of course, to keep on challenging and fighting the Israeli colonialism into which they were born, until the day it collapses. On the other hand, they have to boldly face the political stagnation and degeneration that has spread among us. They have to become the living artery that will revive our revolution and bring it back from the death entailed in a growing culture of passivity that has arisen from decades of political inactivity.” 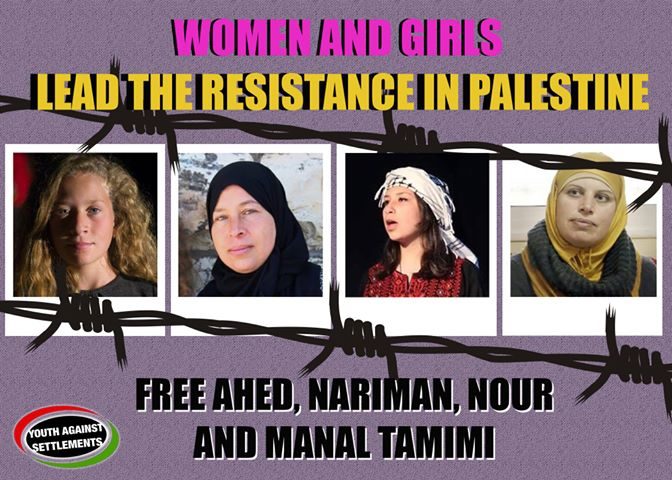 Daily Twitterstorms organized by the Facebook page Free the Tamimi Women have highlighted the cases of Ahed, Nariman, Manal and Nour. The Twitterstorms are continuing on a daily basis, with the hashtag released at the time of the Twitterstorm; the storms take place at 10 am Pacific time/1 pm Eastern time/6 pm UK time/7 pm Central Europe time/8 pm Palestine time.

International protests in New York, Berlin, Brussels, Milan and elsewhere have highlighted the cases of the Tamimi women, including Ahed’s case and that o other Palestinian children targeted for persecution by the Israeli occupation in military courts with a conviction rate of over 99 percent. Protests are being organized in the coming days, on 5 January in New York and 6 January in Manchester, to demand freedom for Ahed, the Tamimi women and their fellow Palestinian prisoners. In Argentina, a collective of organizations dedicated a mural to Ahed Tamimi:

Samidoun Palestinian Prisoner Solidarity Network denounces the ongoing imprisonment of Ahed, Nariman, Nour and Manal Tamimi, among over 500 Palestinians arrested by Israeli occupation forces following U.S. President Donald Trump’s declaration of recognition of Jerusalem as the capital of Israel. Issa Qaraqe of the Palestinian Prisoners Affairs Commission stated that approximately half of those detained, like Ahed, Abdul-Khalik Burnat and Fawzi al-Junaidi, are children. There are hundreds of Palestinian children jailed by Israel and frequently subject to beatings, abuse, and interrogations without parents or lawyers present in violation of the law. We urge people of conscience around the world to take action to demand freedom for Ahed and her fellow detained and jailed Palestinian children in occupation detention centers, interrogation centers and prisons – and for the Tamimi women and all detained and imprisoned Palestinians.

Samidoun Delegation to Lebanon Day 3: Generations of struggle for return and liberation