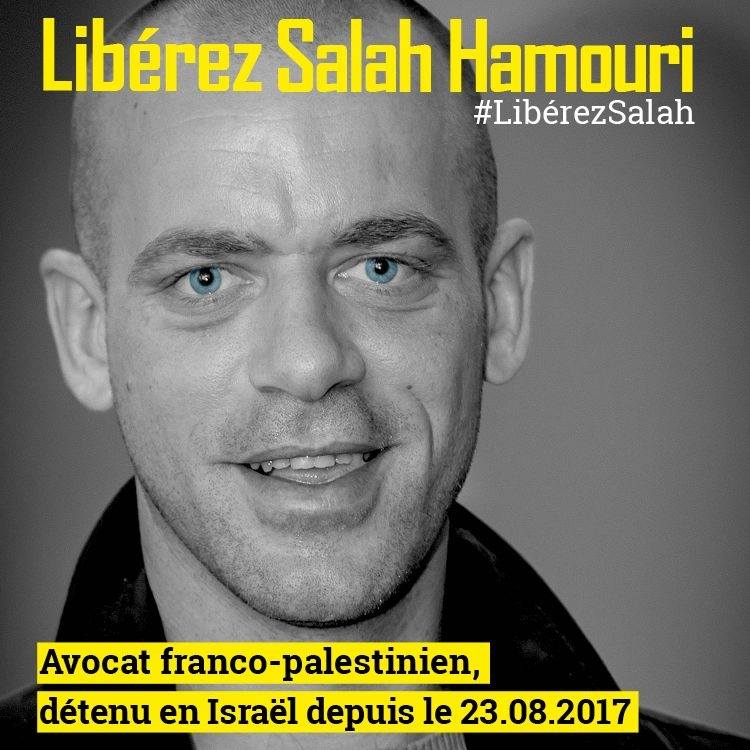 The support campaign for Palestinian-French lawyer Salah Hamouri, imprisoned by the Israeli occupation without charge or trial under administrative detention, has warned that he is threatened with continued detention. The Shin Bet has reportedly requested that far-right racist Israeli defense minister Avigdor Lieberman renew Hamouri’s detention for an additional six months.

Thousands of fellow French citizens, including 1600 elected officials, and dozens of city councils and municipalities have adopted resolutions demanding the immediate release of Hamouri, a Palestinian Jerusalemite who works as a field researcher for Addameer Prisoner Support and Human Rights Association. He passed the Palestinian bar examination to practice as a lawyer only three days before he was seized by occupation forces on 23 August 2017 and ordered to administrative detention without charge or trial. After extensive pressure and advocacy from the support campaign led by Salah’s wife, Elsa Lefort, French president Emmanuel Macron requested the release of Hamouri on 10 December at his meeting with Israeli occupation prime minister Benjamin Netanyahu.

Hamouri is a former Palestinian political prisoner whose case was widely known throughout France as a symbol of injustice and false allegations until his release in 2011 in the Wafa al-Ahrar prisoner exchange, only a few months before his sentence was to end. He has spoken throughout France and internationally at events like the World Social Forum on Palestinian prisoners and the struggle for freedom. After this time, he studied law; during his studies, he was banned from the West Bank, preventing him from attending classes at his university. When he traveled back to Palestine from a visit to France with his French wife, Lefort was denied entry despite a valid visa while pregnant and slapped with a 10-year entry ban, forcing her to give birth to her son in France rather than with his father in Palestine.

The support campaign for Salah Hamouri has emphasized that the next days are critical as Lieberman is expected to issue the order on or before 28 February. They demanded that the French government take serious action to protect their citizen and demand Israel immediately release Hamouri.

Samidoun Palestinian Prisoner Solidarity Network reiterates our total support for the immediate liberation of Salah Hamouri, a dedicated struggler for the freedom of Palestine and the Palestinian prisoners. The French government’s overwhelming inaction on the case of Salah Hamouri despite the mobilization of thousands of citizens and elected officials indicates their extreme disregard for the rights of Palestinians, including those who are French citizens. The French state’s prosecutions of BDS activists and imprisonment of Lebanese struggler for Palestine Georges Ibrahim Abdallah for over 33 years are echoed in the silence and complicity in the ongoing imprisonment of Salah Hamouri. The French government has a clear responsibility to make it clear that Salah Hamouri must be freed and that his ongoing imprisonment without charge or trial under administrative detention is absolutely unacceptable. Free Salah Hamouri! Free Palestine!

1. Sign the appeal to support Salah Hamouri at http://libertepoursalah.fr

2. Organize an action, event or activity to demand an end to Salah Hamouri’s detention and his immediate freedom. Raise his case at events and actions for Palestine.

Addameer Prisoner Support and Human Rights Association reproduced an interview with Salah Hamouri conducted by L’Humanite from the Negev desert prison. We reprint the interview here for broad distribution; his words are an inspiration to all who struggle for Palestinian freedom.

How do you feel?

It has been a long time since I last felt like this, this is actually a really difficult question for me to answer. This is the fourth time I have been detained, with this time coming after five years and a half of freedom. In those past five years, I’ve built a life for myself, and started a family which have lived apart from me since 2016, and now they’re even further away than before. In those years I went back to school as well. I actually became a lawyer three days before I got arrested.

So I guess I’m good. There’s good solidarity between prisoners in here, and sometimes I recieve news from outside through the lawyers.

One of the most difficult thing I encounter here is seeing children, 14 and 15-year-old imprisoned. They are in this brown uniform, handcuffed and dragged by prison guards from one place to the other.

I was transported to al Ramleh recently. During the transportation, I couldn’t handle the scene of six prisoners in one small cage that no human being should be put in. In there, I saw one prisoner I knew and actually lived with for five years in the past. His name is Walid Daqqa. He looked different, and had more gray hair than the last time I saw him. He also had more wrinkles on his face. When he saw me he yelled, “French guy! What are you doing in here? Why did they detain you?” In those moments, the map of Palestine was drawn in my head, and I was thinking of how much Palestinians suffer. The continuous arrests are just one mechanism that the Israeli occupation uses to pressure us to leave our land. It’s also a mechanism used to break and destroy our social life. All the relationships we build inside the prisons are a tool to resist this occupation, which obviously aims to empty Palestine of its people, especially Jerusalem.

What are your detention conditions and how are you treated?

I’m now in al-Naqab prison where there are 2400 prisoners. Many of them have been here for the past ten years, and there are 300 administrative detainees as well. We have a right to receive clothes and books but only four times a year, which isn’t enough. We don’t receive any Arabic newspapers and we have access to only one TV channel of news which is in Hebrew, the rest of the channels are for entertainment.

The Israeli Prison Service (IPS) are using soft torture against us; psychological torture to break our will and force us to leave Palestine. This kind of torture is much harder than any physical torture. We have enough food and we are allowed to leave our prison cells every day, but this isn’t what we want. We want all of this torture to end. They just want to break us, and convince us that there’s no use to resisting  them. This is why we’re not allowed to get enough books or to have access to Arabic news.

For you to get one visit a month for 45 minutes is also a tool of torture, especially when this visit is from behind  glass. We aren’t allowed to hug our families; many parents suffer as a result of our detainment. Primarily, they miss us. Also, this prison is really far away from Jerusalem, so it’s a struggle for families to get here. Never mind those prisoners who aren’t allowed to receive any visits what so ever.

The French Consul and his deputy visited me when I was at al-Mascobiyya, and a representative from the Consulate comes to every court session I have. Additionally, the French Consul visited me here at al-Naqab with his visit application being denied a few days ago. I learnt later that a French group were denied a visit to me as well. In my previous arrests I used to get visits from the French Consul and French diplomats all the time. It’s shameful that the Israeli occupation is treating French diplomats like this, denying them a visit despite the fact that they have been quite mild. The diplomats haven’t asked for the occupation to allow me visits, or hasn’t demanded my release.

What is your opinion on the French Government and their silent position?

We saw how this silence was broken in my previous arrest as a result of the solidarity from French people. The reality behind this silence is Israeli lobbying and pressure on the French government, which prevents the French President from speaking on the issue. France has to be brave and break this silence, to defend me and defend itself from this kind of censorship. France should also defend all people who are oppressed, and live under occupation and imperialist power. I should be treated just as any other French citizen; France should strongly defend my rights. Israel is violating my basic rights by placing me under administrative detention. France should take one strong clear position and defend me, as it should with all French people in the world.

Do you thing the French solidarity campaign to support you is important?

This campaign is really important, it affects me and also other prisoners with me. We all send our gratitude to all those supporters. When I learnt that I would not be released and would be placed under administrative detention,  I knew and was assured that a solidarity campaign would start. I know that in 2011, I was released from the prison because of the strong solidarity campaign in France. Now, I’ve been detained here for the past 100 days and I receive news about the solidarity campaign from my lawyers, and it’s even bigger and stronger than the previous one.

Our struggle will take time, and you should not give up even it takes a long time; I assure you that will win.  Your solidarity is increasing one day after day, and your influence is extending not only in France but also in other European countries. Your solidarity is the only way to make people around the world see us and pay attention to our issue and suffering.

Is there a message you would like to send?

You are the hope for every single Palestinian prisoner in Israeli jails. It is important to show the world the crimes the Israeli occupation authority is committing against Palestinians, especially children. There are many children who experienced detention and this is a systematic Israeli policy that is undertaken with the aim of destroying Palestinian childhood.

You are our voice in Europe and around the world, know that prison will not be the place where the occupier buries our dreams and hopes! We are getting stronger every day and we are convinced that resistance is a right, and a duty for all of us. Only through resistance will we be able to gain our rights, freedom, and independence. Every action you undertake, it sends us sun light, which makes our dark prison cells warmer in this cold winter.