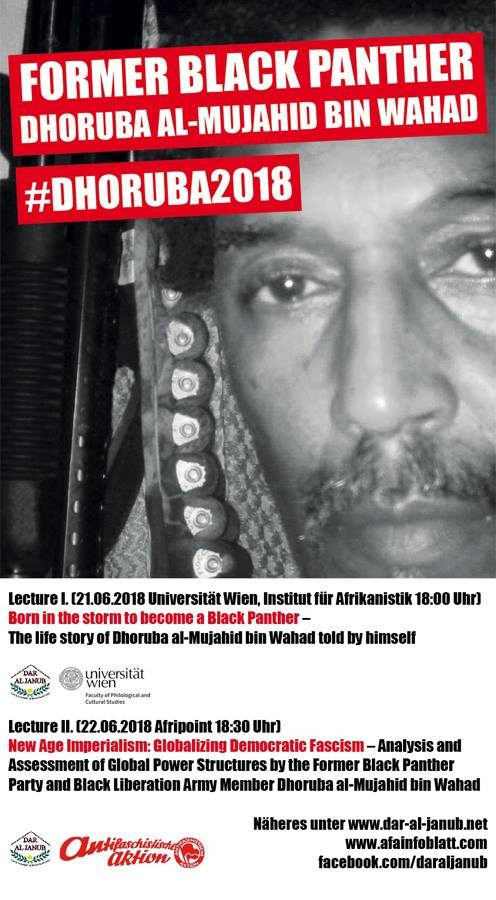 Dhoruba al-Mujahid bin Wahad, former member of the Black Panther Party and the Black Liberation Army, and later a political prisoner in the USA for 19 years, will recount the path of his life from membership in a South Bronx street gang to his ultimate self-realization in the organization and ideology of the Black Panther Party. Along the way, he experienced a first stretch of incarceration for youthful offenses, a break with this past after the murder of Malcolm X, and his conversion to Islam. Why does he tell this story? He wants to make it clear to the current generation of marginalized and socially discriminated people of colour, Muslims, and those struggling for survival in the regions afflicted by imperial wars that organizing and the overcoming of individualism and egoism are the keys to winning rights and dignity. Dhoruba is a person with unique consciousness and personal experiences. He is a witness of his times, an activist, and an academic, who does not describe historical developments in abstruse and intellectualized terms that are designed to extinguish the flame of activism. Dhoruba speaks from experience and from his reflections on this experience to share a picture with his audience that differs markedly from the coopted narrative that is fabricated in the West. Questions will be raised about the compulsive violence of colonialism and consequently about the legitimacy of resistance; reasons for the current paralysis of those who need to take their fate into their own hands will be named, and challenging ideas about Islam and liberation will be raised.

“If we are sincere about African development and building a future for our children then we must fully appreciate that Africa is on a collision course with Europe’s economies and Western civilization as currently configured. The dichotomies between rich and poor nations, north and south, will not continue down the primrose lane of diplomatic vacillation forever. Soon the struggle between “have and have nots” will turn ugly. Absent redistribution of global wealth, unresolved historical injustices will flare into recurring social and political crisis and violent confrontations. Africa’s relative underdevelopment gives it an advantage in the coming world economic crisis. Lack of sophisticated infrastructures, underdevelopment of social services, etc. give Africa an ability to cope economic dislocation better than the more technological dependent societies. Nonetheless, without construction of an Afro centric paradigm as the basis for a Pan-African political/diplomatic agenda, Africa’s potential advantage will be transformed into catastrophe. Should we fail to build a Pan-African movement, it is my opinion that African continent will succumb to a “new and improved” recolonization process during the next millennium. That recolonization process, in my view has already begun. The question now is what are we going to do about it?” (Dhoruba Bin-Wahad, on the relevancy of Nationalism, Ghana 2007)

New Age Imperialism has its own modern day ‘moral’ crusade and ethical artifice of “respect for human rights” to conceal its ignoble agenda and capitalist greed. Unlike the “Old school” imperialism which relied on the ethical artifice of Biblical White supremacy and “Christianizing the African heathen” to rationalize cold-blooded exploitation, New Age Imperialism’s moral cloak is an unbelievably transparent and phony humanism and a cynical respect for “rule of Law”(1). This phony “humanism” though not religious based, nonetheless appeals to universal religious ethics of tolerance and thereby distort most people’s perception of its racist and imperialistic political objectives. Likewise, the developed nation which practice this New Age imperialism are endlessly lecturing poorer nations on the need to “respect the rule of law” while themselves employing “legal” artifice to justify military assassination of heads of state they disfavor, or to rationalize amoral economic embargoes of poorer nations, and secure unimpeded access to Third World resources. The New Age Imperialist consumes an inordinate amount of the world’s resources and are the major source of global pollution and toxic waste. Their ideals of ‘free market economy” and morality of conspicuous consumption are masked by the propaganda of “environmental friendly” multinational corporations. But despite their rhetoric, the Corporate managers of New Age Imperialism do not respect even the rule of “natural law” and derive maximum profits in a manner which pollutes the planet and deplete its ecosystem. New Age Imperialist encourage greed, individualism, and selfish acquisition of power. Their ethos of conspicuous consumption appeals not just to the “rich and famous” but to the “down and out” who are encouraged to fantasize becoming wealthy themselves even though the dichotomy between rich and poor benefit only the rich and grows wider everyday. Finally, “New Age Imperialism” seeks to defuse the prerequisites for Pan-African unity by amplifying the budgetary influence of capital (translatable as “debt”) on Africa’s half-finished decolonization progression and thereby emerging African nations relationships within the International community of Nations. The control of Finance capital over the governments of former African colonies was exercised by the IMF, World Bank, African Development Bank and several other institutions created after WWII to macro-manage the rise of former colonialized peoples – fully two-thirds of the planets population! Globalization from this perspective is not transformative, but absolutely restrictive, confining African national economies to “niche” roles as providers of raw materials, cheap labor, and enormous profits for Western multi-national corporations, the major beneficiaries of Globalization. With this perspective in mind the current upsurge of “democratic reforms” in Africa, takes on a more sinister role and reveals the hand of New Age Imperialism at-work on the African continent and the nature of its political agenda.

We can see that Finance capital (read dividends from colonialism] now require a new integrated global marketing system based on consistent recirculation of perpetual debts. This integrated (or organic) global system is meant to supplant the old imperialist economic order and alleviate the economic anomalies of cold-war rivalry between competing capitalists and socialist systems.

Since the end of the cold-war, the introduction of “free market” measures on the individual “socialist” economies of Africa, were accompanied by shifts in the ‘political policies” of those African states toward a “volunteer” form of “new age” imperial controls and away from Pan-African interdependence. That is to say, what is supported by the major industrial and financial centers of global commerce is not “democracy” or promotion of human rights per se, but promotion of those Africans who support policies of “liberal investment opportunities” and “free market development”. This is because, only by masking Euro centric “political democracy” as the only national characteristic conducive for “investment”, can integration of Third World resources into a global marketing system that (organically) services the needs of U.S. and European finance capital be achieved and characterized as “globalization”.

Colonialism integrated Africa into Europe’s economic development while under developing Africa. New Age Imperialism does the same thing, but with a different twist: It integrates African “development” into European economic supremacy by regulating Africa’s markets, reinvesting African debt payments, and restricting Africa’s access to capital. It is my opinion that global economic integration as defined by the developed industrial economies represents the highest form of neocolonialism to date, which is defined herein as New Age Imperialism because of its wholesale incorporation and co-optation of post -colonial progressive ideals, and values.

(1) ‘‘Rule of Law”, vis a vis the European nation-state as a Western concept is relatively new, dating essentially back to the Magna Carta. However, it is from an Afro centric perspective an artifice by which to institutionalize and regularize territorial conquest or racial subjugation. This a historically accurate view and can be verified in exhaustive detail by examining British, French, Belgian, and Portuguese colonial records in Africa.. For example, the annexation of West Africa by the British as the “Gold Coast Territory” is a classic case of a carefully devised matrix of legal definitions justifying crimes of British military aggression, fraudulent commercial dealings, religious persecution, chattel slavery, as well as the usurpation of sovereign peoples right to self-determination, theft of their land, and castration of their political institutions. Actions which are still considered unacceptable behavior for national governments. Indeed, the USA, Britain and their allies currently embargo a number of nations for supposedly practicing similar activity, e.g.. Iraq, Iran, Cuba, Libya, and criticize others for employing varying degrees “human rights” abuses.