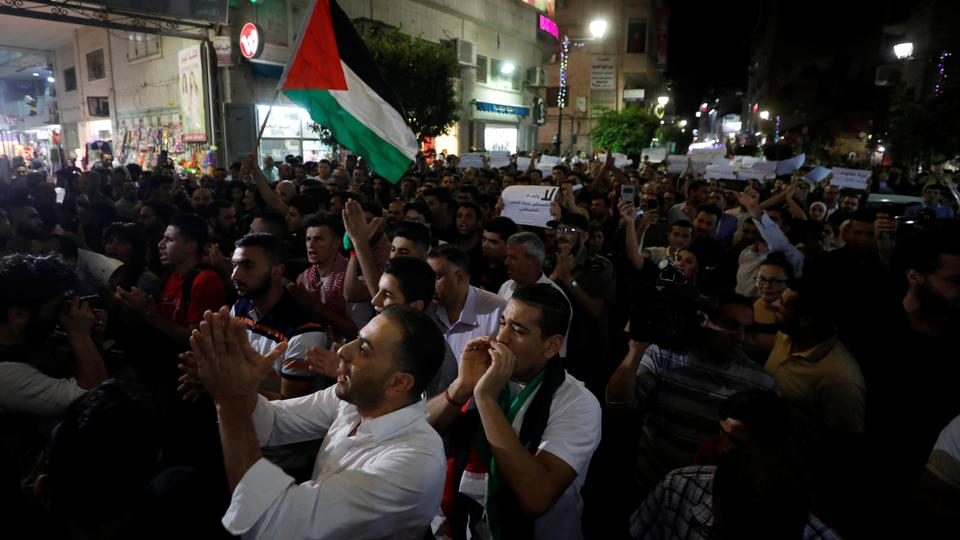 The movement to end the sanctions imposed by the Palestinian Authority on fellow Palestinians in Gaza is continuing to grow. On 20 June, protests will continue in Bethlehem and Beirut, while the next Ramallah demonstration is scheduled for 23 June, accompanied by actions in Amsterdam and Milan. As youth organizers continue to mobilize, outrage has grown in Palestine and internationally after PA security forces – funded and trained by the United States, European Union and Canada – attacked a demonstration in Ramallah, abusing participants, including a number of former political prisoners and Palestinian rights advocates.

The PA sanctions on Gaza have drawn widespread opposition, especially as they function hand in hand with the deadly Israeli siege backed by reactionary Arab regimes like Egypt as well as the U.S. and other imperialist powers. As Palestinians in Gaza march and face death and severe injury in the Great March of Return and to break the siege on Gaza, the PA in Ramallah has continued sanctions that include refusing to pay public employees, delaying approvals for medical transfers and restricting remittances to the Strip. 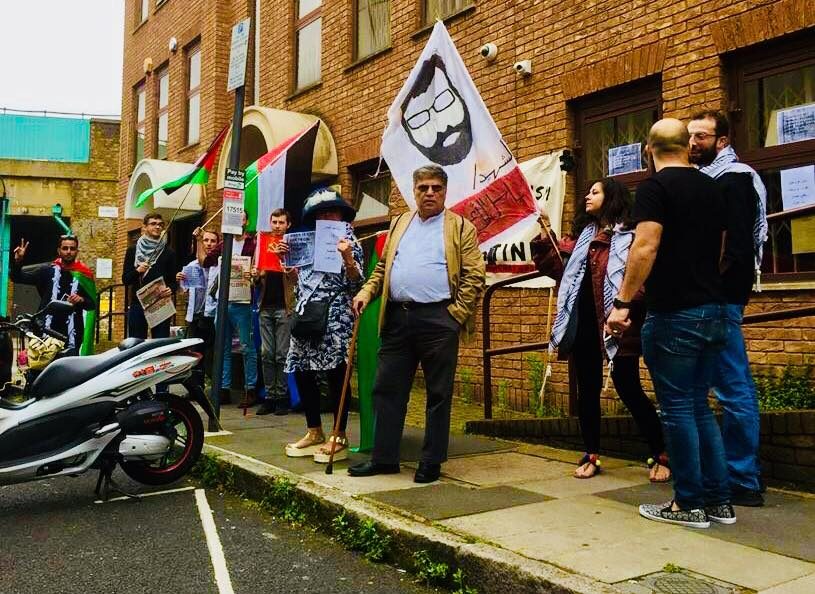 In London, Palestinian youth activists organized a protest outside the Palestinian Authority’s diplomatic mission on Sunday, 17 June. Lara Khalidi of the Samidoun Palestinian Prisoner Solidarity Network read out the statement of the Union of Palestinian Communities and Organizations – Europe at the protest:

“The Union of Palestinian Communities and Institutions – Europe condemns in the strongest terms the heinous crimes committed by the Palestinian Authority’s security forces in Ramallah and Nablus. We hold the leadership of the Authority and the Palestine Liberation Organization fully responsible for this brutal repression and for the consequences of this behavior that violates the national ethics and human values of struggle held dear by our Palestinian people.

What took place yesterday at the hands of the Palestinian Authority in the occupied West Bank – and the unjust sanctions imposed by its leadership, outside the bounds of legality, upon our Palestinian people in the Gaza Strip – emphasizes the nature of this security authority as an agent for the occupation. One of its primary functions is to serve as a security guard for the interests of the Zionist entity that enables the ongoing oppression and siege of our people in the West Bank and the Gaza Strip. It also participates in besieging the Palestinian resistance and attempting to pass suspicious political deals at the expense of Palestinian legitimate national rights and the dignity and rights of all people.

As the occupying entity is engaged in all types and forms of aggression, siege, arrests, land confiscation, home demolition, starvation, massacres and other crimes, the Palestinian Authority is embarking on a path that complements the role of the occupier. It imposes more sanctions on our people, closing the doors of national dialogue and dealing with the masses of the people with attacks and insults.

The Union condemns these practices as criminal and calls upon the masses and the organizations and institutions of the Palestinian and Arab communities in Europe, especially the Palestinian youth, to shoulder their responsibilities and organize the widest possible youth and popular mobilization to actively support our steadfast peoplecin Palestine. This includes supporting their struggle through building pressure on the occupation – and on the Palestinian Authority and its embassies and representatives abroad – in line with the will of the Palestinian people to lift their grip on Gaza and the West Bank. This requires expanding the circle of this popular campaign to lift the sanctions on Gaza to reach all Palestinians in exile and diaspora on the European continent.

The Union sees that the battle to break the siege and lift the sanctions, and the popular movement confronting the Palestinian Authority’s attacks on the dignity and rights of our people in occupied Palestine, is an integral part of a comprehensive national struggle that cannot be separated from the tasks of the Palestinian national liberation movement.

We demand that the PA security forces immediately release all political prisoners and detainees.

Our greetings and salutes for a speedy recovery to the wounded.

Shame on those who violate the rights and dignity of the Palestinian people!”

Palestinian prisoners have also expressed their support for and involvement in the movement to lift the sanctions. In a statement by the Prison Branch of the Popular Front for the Liberation of Palestine on 19 June, they said that “all prisoners are following with great anger the continued actions of the Authority to cut the stipends of prisoners [from Gaza], considering it a crime against the prisoners and their families and an attack on the right of the Palestinian people to resist the occupation. While the occupation state and US imperialism demand an end to prisoners’ stipends, labeling them ‘terror financing,’ the Authority acts to stop the disbursement of prisoners’ allocations, consistent with this Zionist-U.S. demand.” The statement noted that while the Authority claimed in statements to reject such demands, the actions against prisoners from Gaza show dangerous compliance.

The statement noted that “all prisoners are preparing for a major strategic step that will be a precedent in our struggle, if it becomes necessary to wage a hunger strike against the PA leadership to stop this action which affects one of the key aspects of our ntional struggle.” In addition, the PFLP prisoners said that “PA funds belong to the Palestinian people and no one has the right to dispose of them on the basis of private ownership or factional monopolies. These funds, accumulated mostly from Palestinian taxpayers, must not be used as a means of political blackmail and punishment against the Palestinian people.”

This followed an earlier statement “praising the youth movements calling for an end to the sanctions imposed by the leadership of the Authority on our Palestinian people in the Gaza Strip. These movements must continue and expand to include all sectors of our people to put an end to the policies of a handful of people in the leadership of the Authority who are implementing the policies of the Zionist occupation.” The statement also strongly condemned the attack on the demonstrations by PA security forces.

Ahmad Sa’adat, the imprisoned General Secretary of the PFLP, issued a letter from prison calling for the growth of the movement and the building of a Palestinian leadership oriented toward resistance. Sa’adat’s case is one of the most infamous examples of Palestinian Authority security coordination with Israel – before he and his comrades were seized in a violent attack by the Israeli occupation on Jericho prison, they were imprisoned in PA custody, under US and British guard, for over four years. He was seized by PA securityin a surprise attack after being tricked by PA official Tawfiq Tirawi to come to a private meeting:

“The continued steadfastness of our brave Palestinian people in the Gaza Strip, in the March of Return and Breaking the Siege imposed on our people, has exemplified the finest themes of sacrifice, love and creativity. Nevertheless, the monopolistic leadership in the Authority and the PLO continues to impose unjust sanctions against our people in the Strip of resistance. The frenzied attempts to suppress any voice of criticism or protest against this unjust decision and demanding its end has led to the blatant, unbridled repression of the peaceful, democratic youth movements that have emerged in the West Bank. We have also seen echoes of this repression by the security services of the ruling authority in the Gaza Strip against protests to call for an end to division. In the West Bank, this is accompanied by representatives of the Authority and statements of the PLO threatening the masses of the Palestinia people with further repression and the stifling of public freedoms. Some of these voices of the Authority style themselves as judges of treason of this or that faction and protectors of “legitimacy.”

These serious abuses, which, if they continue and are not confronted seriously with those responsible being held accountable, will put our people on the lip of a volcano that can explode at any moment. At the same time, this situation raises more than a mere question mark about the credibility of this leadership’s purported rejection of the so-called “deal of the century,” the current form of the U.S.-Zionist attack on the Palestinian people that aims to liquidate the Palestinian cause and the national rights of our people. It aims to impose complete dominance over our nation. The true path to confront the U.S.-Zionist attacks at this critical moment must begin with ending the sanctions and strengthening the steadfastness and resistance of our people in the Gaza Strip. This means using the Palestinian National Fund as a source of leverage to mobilize our people and a font of internal strength rather than a weapon of dominance. This is necessary in order to overcome the adverse effects that arose from the convening of the illegitimate session of the Palestinian National Council, in violation of national consensus. Inustead, what is needed is a unified strategy of struggle to organize the resistance of our people everywhere and the construction of mechanisms of leadership, first and foremost, the PLO, as an umbrella vessel and a competent leadership of the Palestinian people everywhere they are.

Samidoun Palestinian Prisoner Solidarity Network expresses its support and solidarity with the rising movement against the sanctions on Gaza and reiterates its call to end Palestinian Authority security coordination with the Israeli occupation. The attack on the demonstration in Ramallah only shows once more the violence of security coordination by the Palestinian Authority against the Palestinian people, as those tear gas canisters and batons are never turned on the Israeli settlers who come to confiscate land and burn trees nor on the Israeli soldiers who nightly invade to seize, imprison or kill Palestinian children, youth and adults.

The PA sanctions on Gaza cannot be detached from security coordination, as they operate hand in hand with the Israeli siege that has been systematically targeting Palestinian existence in Gaza for over 11 years. In addition, the PA sanctions come hand in hand with the role of the United States, Canada, the European Union and Arab reactionary regimes in the area in bolstering the siege on Gaza rather than supporting people struggling for basic rights and freedom.

We urge all supporters of Palestine and the Palestinian prisoners to join in this movement in their own international context as part of the campaign to support the Great Return March and break the siege on Gaza.

1. Sign the petition.  Demand an end to PA sanctions on Gaza: https://www.change.org/p/mahmoud-abbas-lift-the-sanctions-on-gaza-and-end-repression-in-the-west-bank/

2.Organize and join protests at PA missions and embassies in your area. One action is being organized on Sunday, 24 June at Dam Square in Amsterdam and another on Saturday, 23 June at Piazza San Babila in Milan. Demand an end to the sanctions on Gaza. Send your protests and actions to samidoun@samidoun.net or contact us on Facebook.

On the 28th anniversary of Oslo, join Samidoun in Madrid this October to stand for Palestinian liberation