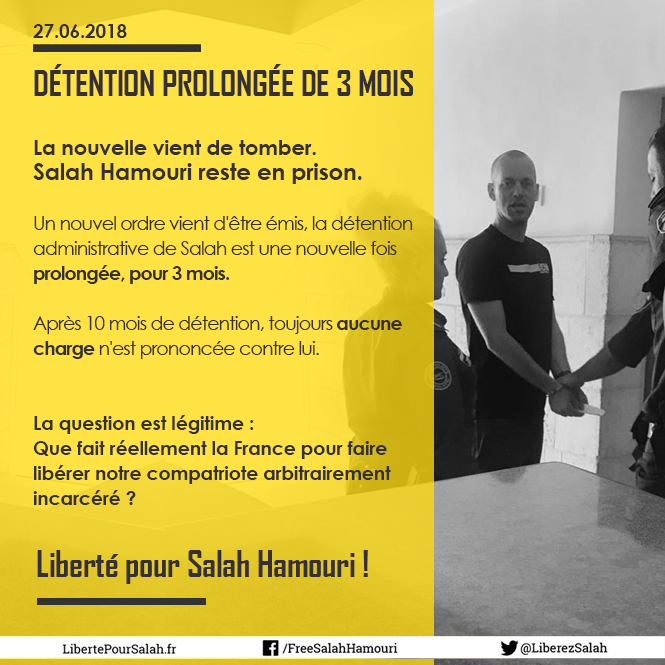 French-Palestinian lawyer Salah Hamouri has been ordered to another three months in administrative detention, imprisonment without charge or trial, according to a new order issued as of Wednesday, 27 July by far-right, racist Israeli Defense Minister Avigdor Lieberman. He has already been imprisoned for 10 months after he was seized from his home in Kufr Aqab, Jerusalem by Israeli occupation forces on 23 August 2017. After a lengthy interrogation, he was ordered jailed for six months without charge or trial. In February, his detention was renewed for another four months. Hamouri, who is a dual French-Palestinian citizen, has received the official support of dozens of French cities and towns and over 1,700 elected officials.

The renewal of the detention order comes days before Hamouri is to be honored in Montcel, France on 6 July. He will be declared a “citizen of honor” of the city on that date with a ceremony including the city’s mayor, the local member of the French National Assembly, Elsa Lefort, Salah Hamouri’s wife and coordinator of his support committee and his parents, live over video connection from Jerusalem. Organizations like AFPS 63 will also be involved in the event, which will include a screening of “Palestine: The Prison Case.”

Despite the extensive organizing in France, the French government has continued to celebrate the Israeli occupation state that imprisons its citizen. On an earlier occasion and after significant pressure, French President Emmanuel Macron reportedly asked Israeli Prime Minister Benjamin Netanyahu for Hamouri’s release. Instead of releasing him, however, his detention has been extended twice since that time. And instead of acting to defend French citizen Salah Hamouri – not to mention the Palestinians killed by Israel in the Great Return March in Gaza and the thousands imprisoned – by sanctioning the Israeli state, the French government has turned around and inaugurated the “France-Israel season” in a joint celebration by Macron and Netanyahu.

Even in France, expressions of solidarity with Hamouri at the local level have come under attack by the prefectures – the representatives of the central state. In Stains and elsewhere, mayors who have hung banners for Hamouri’s freedom have faced orders and judicial complaints in an attempt to force their removal, despite the fact that urging Hamouri’s release is ostensibly the official position of the French government.

Hamouri, a former Palestinian political prisoner whose prior sentence also won widespread support in France before his release in 2011, shortly before his sentence expired, in the Wafa al-Ahrar agreement, works as a field researcher for Addameer Prisoner Support and Human Rights Association. He has spoken throughout Europe and internationally on Palestinian prisoners and the struggle for freedom. After his legal studies were repeatedly interfered with by Israeli restrictions barring him from the West Bank, where his university is located, he graduated and just three days before his arrest, passed the Palestinian bar examination to be certified as a practicing lawyer.

Samidoun Palestinian Prisoner Solidarity Network demands once again the immediate release of Salah Hamouri and all of his fellow Palestinian prisoners. This arbitrary renewal of his imprisonment underlines the fact that the French state is complicit in his continued detention without charge or trial. The inauguration of the “France-Israel Season” while Salah Hamouri is held behind bars makes a mockery of the government’s expressions of concern, which the Israeli state openly flouts. This is no surprise, as it goes hand in hand with attempts to suppress and criminalize BDS activism in France, not to mention the over 33-year imprisonment of Georges Ibrahim Abdallah, Lebanese Arab Communist struggler for Palestine, in French prisons.

From the jails and the courts of the occupation to the cities and campuses of the world, Salah Hamouri is a consistent and clear voice against oppression and for liberation – which is why the Israeli occupation is keeping him behind bars, without charge and without trial. Free Salah Hamouri! Libérez Salah Hamouri!