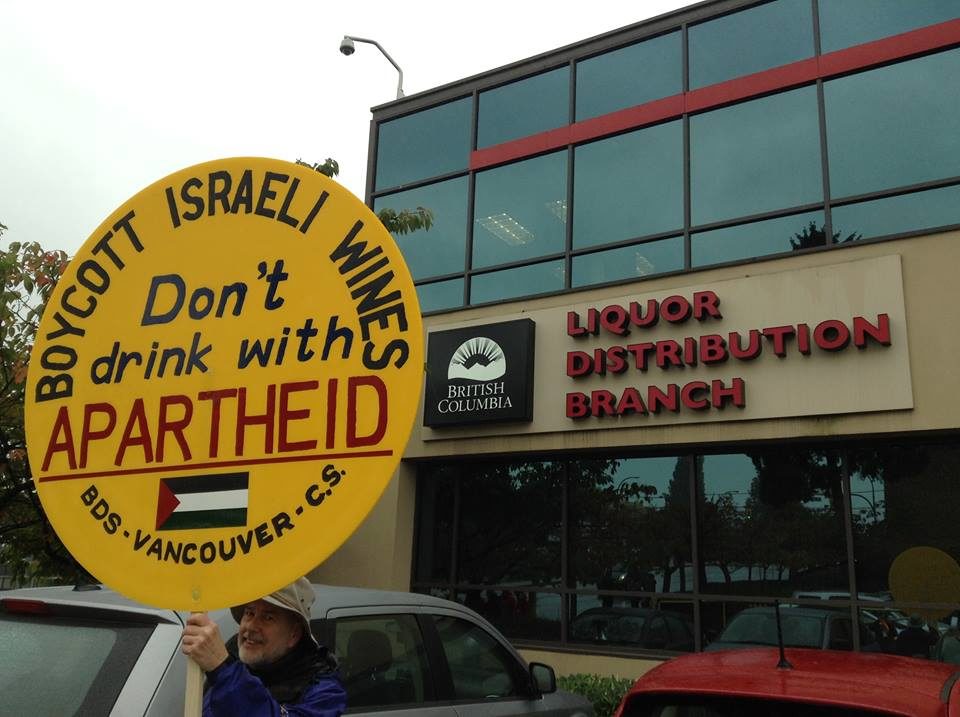 David Eby, BC’s Attorney General, is responsible for the provincial Liquor Distribution Branch. For many years, there has been an ongoing local campaign to call for a boycott of Israeli wines, many of them produced in the Occupied Territories, which are being sold in our publicly owned BC Liquor Stores. We had hoped that the NDP government would be more concerned with these blatant violations of international human rights; we asked Mr. Eby to respond to this issue but received exactly the same response we got from previous governments, which was to completely ignore the issues raised and instead focus solely on “personal choice”.

The wines in question are either from the Galil Winery, which is a joint venture with the Golan Heights Winery (the name of which speaks for itself), or from the occupied West Bank, including the illegal Gush Etzion settlement bloc around Jerusalem. Two wines of particular note are the Efrat Judean Hills Kosher and Vision Malbec, both produced by the Israeli Teperberg Winery. This winery openly states that some of its vineyards are in occupied Palestinian territories and even provides a map on its website showing vineyards in the occupied West Bank.

One of the Teperberg vineyards is in the illegal Israeli settlement of Mevo Horon according to the progressive Israeli research group “Who Profits”. This particular settler enclave is in the Latrun area of the occupied Palestinian West Bank and is close to the infamous “Canada Park” built by the Jewish National Fund on the rubble of 3 Palestinian villages with Canadian tax-deductible monies.

All of this is in direct contravention of the Fourth Geneva Convention and “stated” Canadian policy. Detailed information on Israeli wineries can be found in the exhaustive study done by “Who Profits” entitled Forbidden Fruit: Israeli Wine Industry and Occupation.

This campaign was initially launched 10 years ago and was endorsed by 22 local and international groups. At that time, the Israeli government had announced plans to “rebrand” its 60 years of dispossession and ethnic cleansing; sadly, we are now at 70 years of Palestinian dispossession and the situation for Palestinians, especially in Gaza, is worsening by the day. Our educational pickets have also highlighted the parallels between the campaign in BC against South African apartheid wines09 09  and our campaign. The response to these actions has been encouraging and additionally, other activists in eastern Canada have launched a lawsuit against the Canadian Food Inspection Agency for mislabelling these wines as “made in Israel”.

Please support our campaign to tell David Eby and the BC government that they do not represent us by stocking these wines, which are the fruit of a brutal occupation. As our South African brothers and sisters said many years ago on the streets of Vancouver, Don’t Drink with Apartheid!!
More info: https://whoprofits.org/company/teperberg-1870