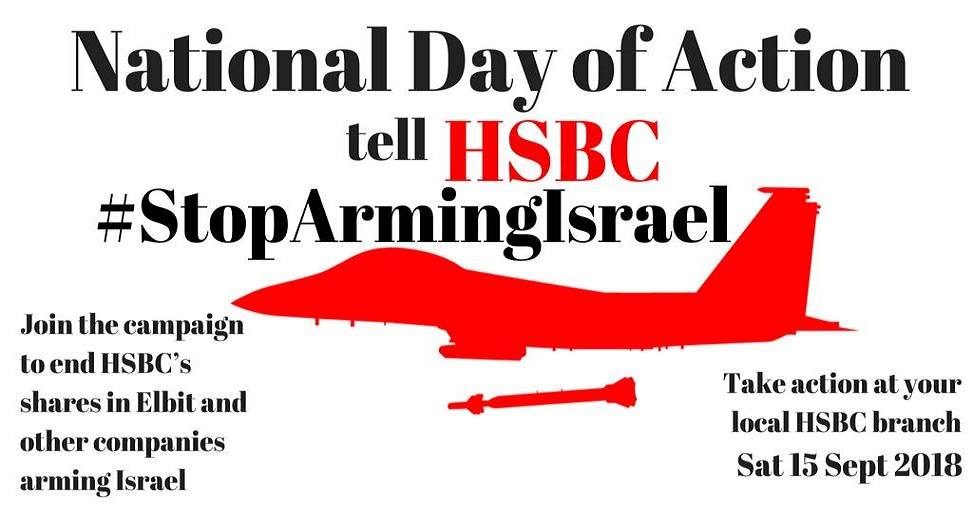 Supporters of Palestinian human rights will be taking action around the country on 15th September calling on HSBC to end its investments in Israel’s arms trade.

HSBC holds shares several arms companies which supply the Israeli military with weapons used regularly in attacks on Palestinians in the West Bank and Gaza Strip.

These include Elbit Systems which makes drones used by Israel in Gaza. It was recently revealed that Elbit’s Hermes 450 drone was part of a 2014 attack in which four Palestinian children were killed on a beach in Gaza while playing football.

In total, HSBC holds over £800m worth of shares in, and is involved in syndicated loans worth over £19bn to, companies that sell weapons and military equipment to the Israeli government. HSBC is part of the chain of complicity.

There have been actions and protests up and down the country at HSBC branches for 18 months and it is important we grow the movement now to pressure HSBC in to ending their links to Israel’s arms trade.

Join the campaign to expose and end HSBC’s investments in Israel’s arms trade by taking action at your local branch.