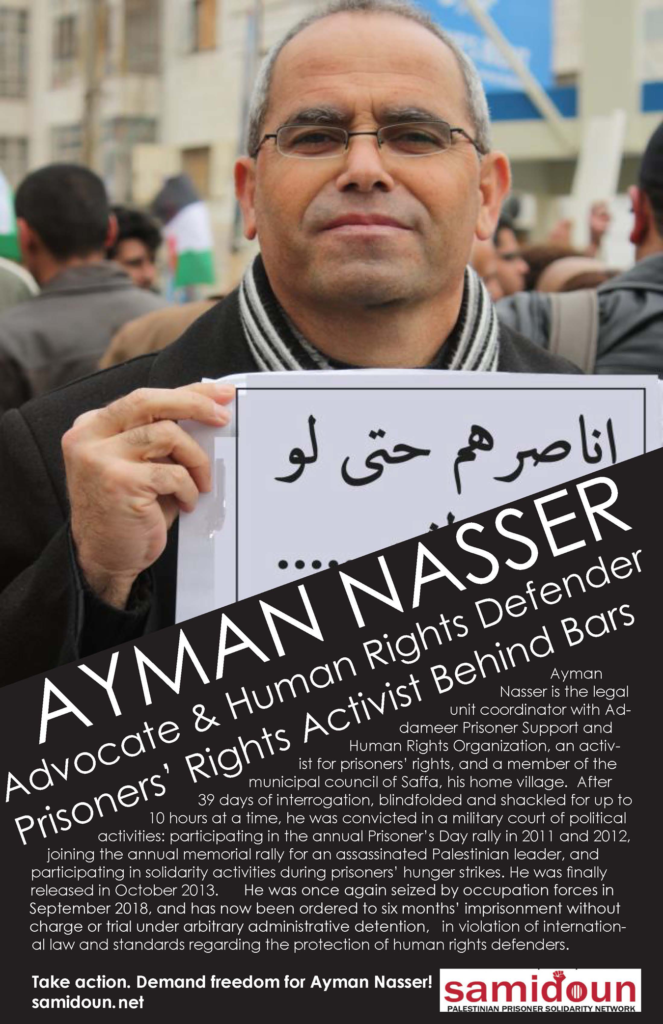 Ayman Nasser, the coordinator of the Legal Unit at Addameer Prisoner Support and Human Rights Association and a long time Palestinian human rights defender was ordered to six months in administrative detention without charge or trial by an Israeli military court on 24 September 2018. Nasser was seized from his home in Saffa near Ramallah on 9 September and interrogated for several days; an administrative detention order was isued against him shortly after his detention, confirmed by the military court.

Nasser, 45, has been arrested on multiple occasions, including in 2014, where he spent a year under administrative detention, jailed without charge or trial, and 2012, when he was jailed for attending Palestinian Prisoners’ Day and other public activities. He is married and the father of four children; his previous detentions have sparked worldwide protest.

Nasser, 44, holds a masters degree in Social Psychology of Education and previously lectured at Al-Quds Open University. He is the founder of Handala educational center in his village of Saffa, which is an educational center established in 1999 and is focuses on arts, athletics and education. He was also elected as a member in the Municipal Council in Saffa village while he was still in prison.

The protection of human rights defenders is an individual and collective right and responsibility, as recognized by the United Nations and enshrined in such key international covenants as the International Covenant on Civil and Political Rights and the UN Declaration on Human Rights Defenders. States have the responsibility to protect these rights, as well as to affirmatively implement human rights. In the case of Israel, not only is it maintaining an illegal military occupation, it has a long record of persecution of Palestinian human rights defenders, including arrests, detentions, travel bans and harassment

Samidoun Palestinian Prisoner Solidarity Network demands the immediate release of Ayman Nasser. His detention once again shows that not only Palestinian prisoners themselves, but also their defenders, are regularly subjected to repression, persecution and criminalization. We urge all supporters of Palestine to raise their voices to call for freedom for Ayman Nasser and all imprisoned Palestinian human rights defenders.