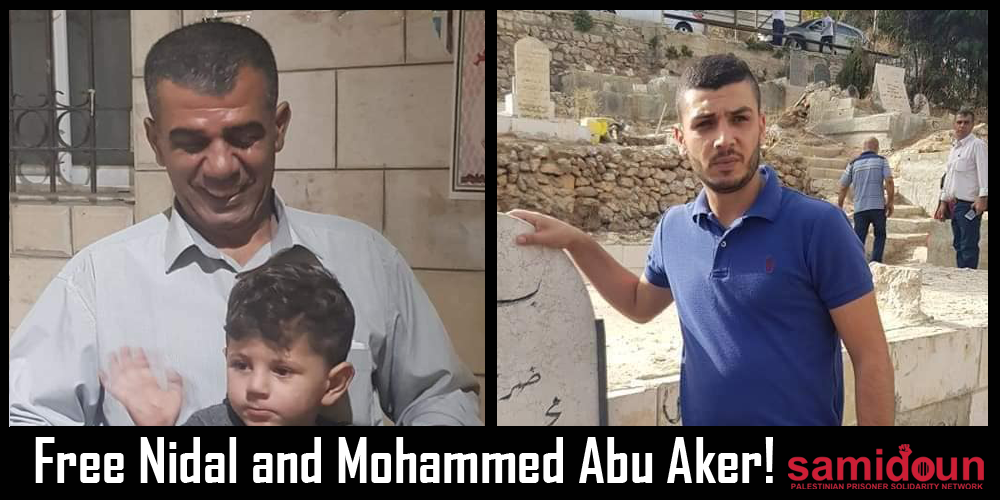 Nidal Abu Aker, a longtime community leader and a journalist in Dheisheh refugee camp, and his son Mohammed Abu Aker, a university student, were seized by Israeli occupation forces who invaded the camp in the early morning hours of Thursday, 1 November. Both are prominent advocates for Palestinian rights and former prisoners who have been repeatedly jailed for their commitment to Palestinian liberation.

Israeli occupation forces invaded the home, pushing, shoving and hitting Abu Aker as he resisted the armed soldiers forcing their way inside the family’s house.

They manhandled Mohammed as they pulled him and his father from their home, raising their weapons in a threat to the Palestinian refugees in nearby apartments.

The Abu Aker family are refugees from Ras Abu Ammar in Palestine ’48; their family has lived in Dheisheh refugee camp since the Nakba. Nidal, 50, is married to Manal Shaheen and the father of three children, Mohammed, Dalia and Karmel. A prominent leader of the Popular Front for the Liberation of Palestine, he is also the host of a program about Palestinian prisoners called “In their cells” on Sawt al-Wihda radio station and a co-founder of the Families of Prisoners Association in the camp.

Mohammed, 25, was released in late 2017 after spending two years and two months in Israeli prison on an array of political charges, including support for and membership in a prohibited organization. All major Palestinian political parties are labeled illegal by the Israeli occupation, and people often face this charge for participating in student, labor or youth organizing, as did Mohammed. A student at Bethlehem University, he is known for his role in organizing the Palestinian student movement on campus.

Dheisheh refugee camp has been a site of intense repression and frequent violent raids by Israeli occupation forces. Youth in the camp have been threatened by Israeli military commanders with phone calls and text messages. Raed al-Salhi, an unarmed Palestinian youth was shot dead by occupation forces in an “arrest raid,” shortly after one occupation soldier had threatened to “shoot [Raed] in front of your mother.”

Samidoun Palestinian Prisoner Solidarity Network demands the immediate release of Nidal and Mohammed Abu Aker. Their arrest reflects the ongoing targeting of their family and other activists in Dheisheh refugee camp as well as the ongoing attack on student organizers in Palestine. According to estimates, there are over 300 university student prisoners in Israeli jails.

These arrests reflect Israeli attempts to remove and isolate the most effective, popular and trusted leaders of Palestinian movements through the use of mass imprisonment. Nevertheless, despite years of imprisonment, the occupation has failed to break their steadfastness and commitment to Palestinian liberation. International solidarity and action is critical to support Nidal and Mohammed and demand freedom for all Palestinian prisoners in Israeli jails.

Internationally, we can help to win their freedom by building boycott campaigns of Israeli products, academic and cultural institutions and urging a military embargo of Israel, and by protesting and campaigning to break the isolation of Palestinian prisoners and to demand their liberation – and the liberation of Palestine and its people, from the river to the sea.