International solidarity is growing with Khaled Barakat, the Palestinian writer who has been subjected to a political ban in Germany for his support of the Palestinian liberation movement. Barakat and Charlotte Kates, the International Coordinator of Samidoun Palestinian Prisoner Solidarity Network, were told their residency would not be renewed in Germany as well. Barakat was threatened with up to a year in prison if he spoke at events, demonstrations or lectures. We are urging the broadest international support for this issue; it comes as part and parcel of a series of repressive attacks on Palestine organizing in Germany, including an anti-BDS motion passed by the Bundestag, the German Parliament, in May 2019.

The repression in Germany also comes as part of a state-sponsored international, multi-million-dollar effort by the Israeli Ministry of Strategic Affairs to repress growing solidarity with the Palestinian people and organizing in Palestinian communities around the world, especially in Western, imperialist powers who have aligned themselves with Israeli apartheid and occupation. Gilad Erdan, the Minister of Strategic Affairs, often called the “anti-BDS ministry,” boasted in a Hebrew-language press release on 1 July about the political ban on Barakat as well as other repressive actions in Germany, including the closure of the bank account of Jewish Voices for a Just Peace and the disinvitation of artists who support justice in Palestine like rapper Talib Kweli.

At the same time that the Israeli government is urging escalated repression around the world, grassroots movements are standing in solidarity with Khaled Barakat and demanding that the political ban be dropped immediately – and, more broadly, with Palestinian rights. This political ban represents a dangerous precedent that could be applied to any non-German citizen who comes to speak about Palestine, especially coming only three months after a similar ban was applied to former Palestinian prisoner and feminist leader Rasmea Odeh.

Please join the support campaign! Send your statements of solidarity to samidoun@samidoun.net or take a solidarity photo featuring the campaign posters to post online or share with us!

Below are just some of the expressions of solidarity we’ve already received. 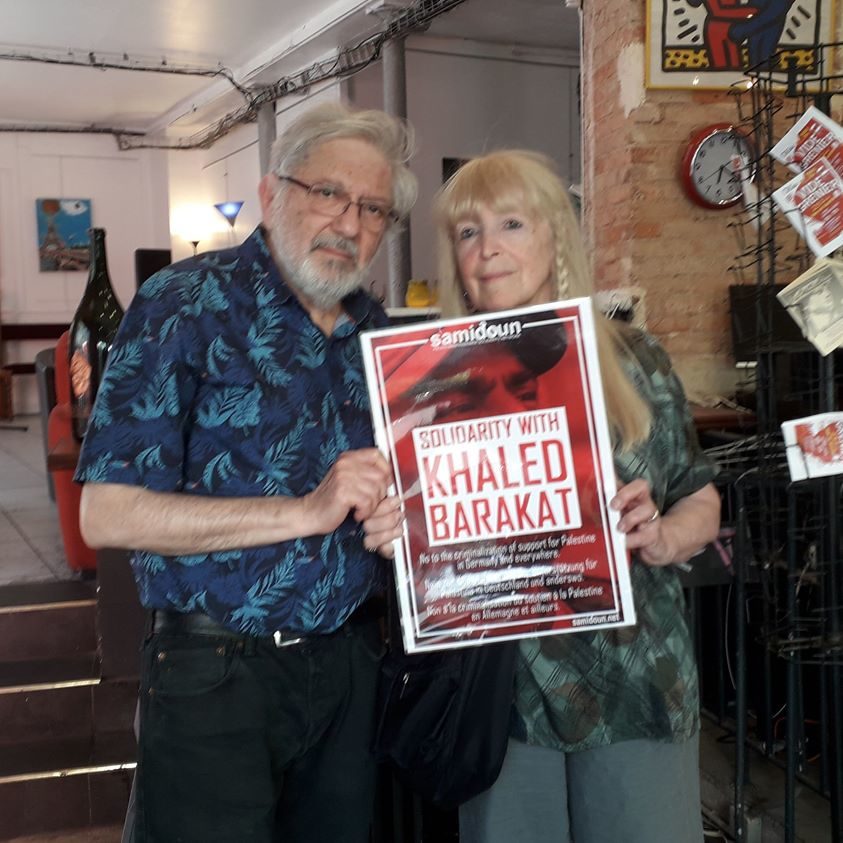 Struggle-La Lucha marched with “Solidarity With Khaled Barakat” signs at the Queer Liberation Parade in New York City on 30 June: 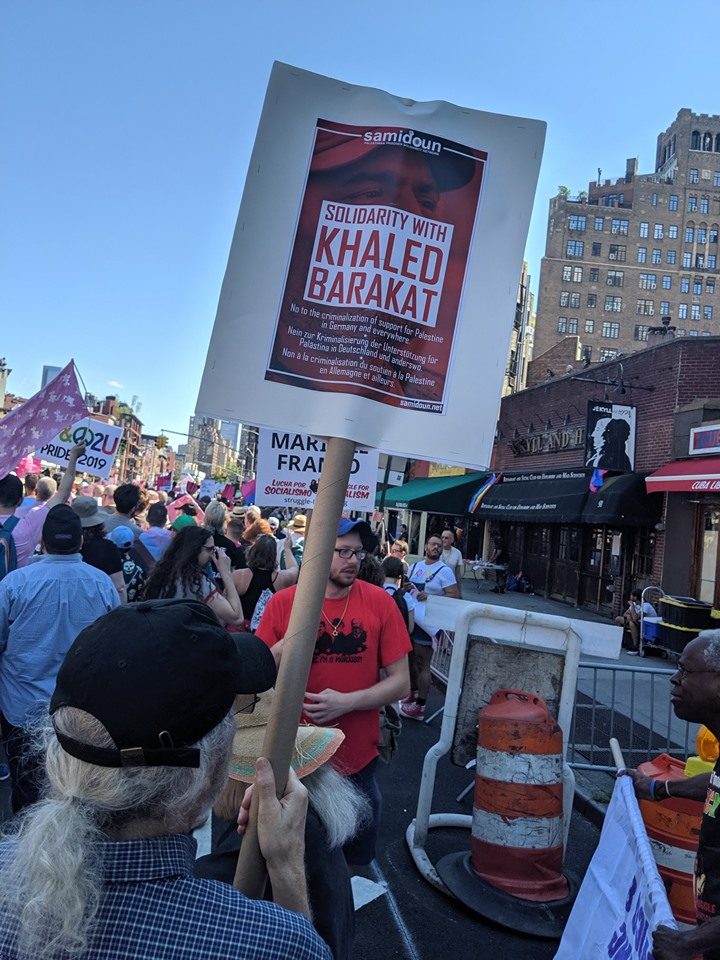 Protesters in Berlin at the demonstration against anti-Palestinian repression and the Bundestag’s anti-BDS resolution on 28 June say, “Solidarity with Khaled Barakat!”

Protesters in Brussels against Trump’s “Deal of the Century” and the Bahrain conference attempting to impose permanent occupation on the Palestinian people stand in solidarity with Khaled Barakat:

Toulouse demonstrators against the G7 on Thursday, 27 June also express their solidarity with Khaled Barakat and Palestine: 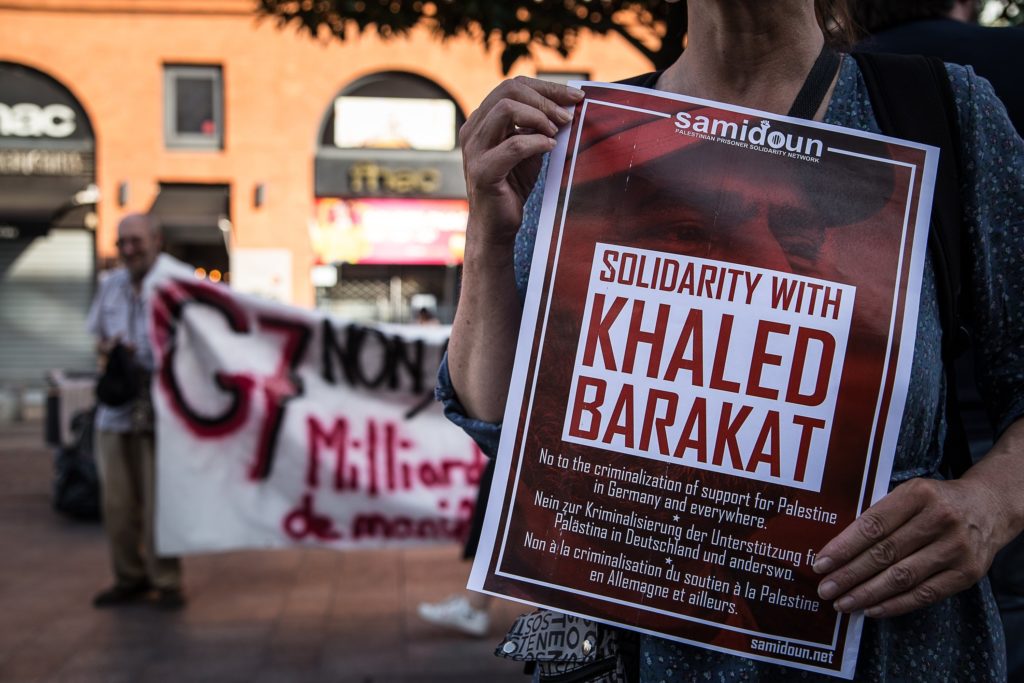 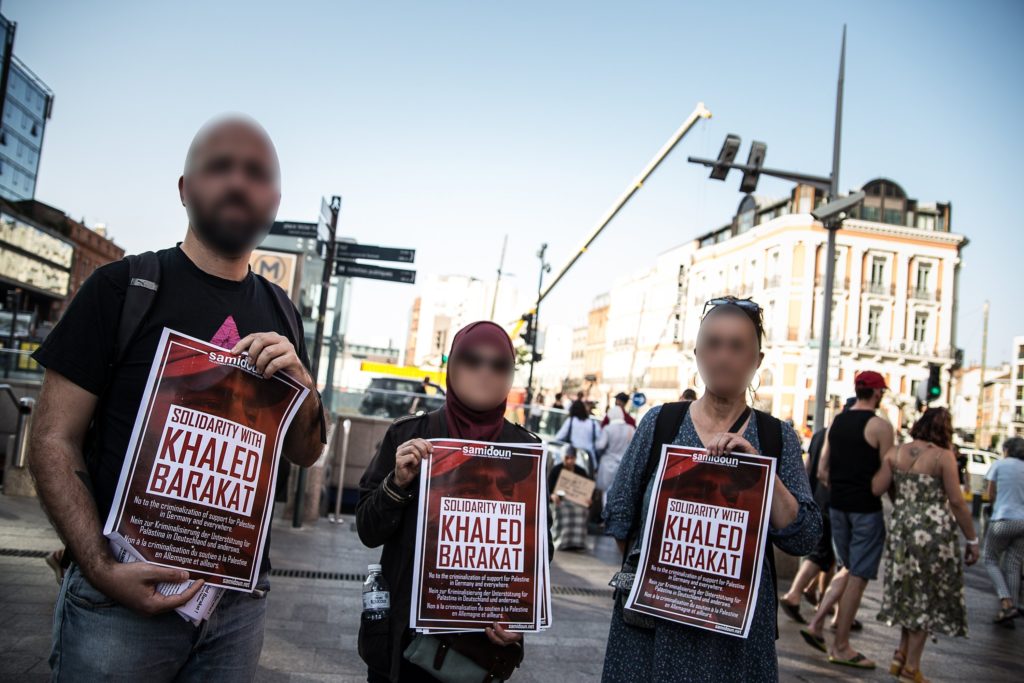 Solidarity image from ATIK (Confederation of Workers from Turkey in Europe): 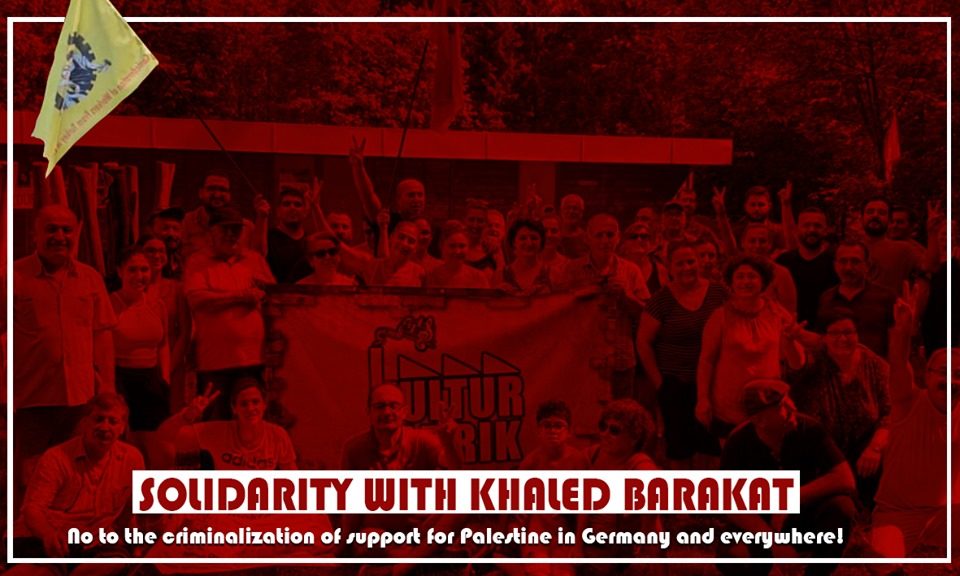 Photos from Toulouse on 2 July where people gathered at the Italian consulate to protest in support of Carola Rackete, captain of the “Sea Watch 3”:

Here are some of the solidarity statements we have received, as well as articles covering the situation:

Add your photo or statement! Send your statements of solidarity to samidoun@samidoun.net or take a solidarity photo featuring the campaign posters to post online or share with us!

On Saturday June 22,  the authorities in Berlin announced that the Palestinian writer and political activist Khaled Barakat was not allowed to speak at a public meeting in Berlin on President Trump’s Middle East plan, the so called Deal of the Century. At the same time Barakat is under an ongoing ban on political activities. He may not speak or appear at demonstrations, meetings, events or even social gatherings of more than ten people. At the same it is announced that his residence permit – together with that of Charlotte Kates (they are married) –  may not be renewed.

This extreme attack against Barakat’s political rights is only the latest in a series of German attacks against the Palestine solidarity movement. In the month of May the German Bundestag (Parliament) passed a motion in which they condemned the BDS (Boycott, Divestment  and Sanctions) of being anti-Semitic – even if it is a fact that the BDS movement is clearly antiracist.

For some time, Khaled Barakat and Charlotte Kates (coordinator of the Samidoun prisoners network) have been in the spotlight of the German authorities and the pro-Zionist lobby groups. Undoubtedly because they belong to the revolutionary Palestinian Left and openly fight the Zionist/Israeli apartheid and occupation policy.

By violating the political rights of the Palestine activists, the German state unequivocally places itself on the side of the Zionist state of Israel and supports the still more desperate Israeli struggle against the growing Palestine solidarity movement.

Thereby the German state is making itself an accomplice of Israeli crimes against the Palestinian people: Ethnic cleansing, massacres of hundreds of unarmed demonstrators in Gaza, building of illegal settlements, demolition of Palestinian  houses, imprisonment and torture of Palestinian freedom fighters, even school children!

The more the Palestine activists are persecuted by Israel and its allied,  the more the international solidarity with the Palestinian people will be growing.

“From the River to the Sea Palestine shall be free”

Denounce the US-Zionist repression of Palestinians in Germany

The Filipino people expresses their warmest solidarity with all freedom-loving Palestinians in denouncing the latest attack against Palestinians.

Khaled Barakat, Palestinian writer and coordinator of the Campaign to Free Ahmad Sa’adat, was banned by the Berlin authorities from delivering a speech last 22 June on the so-called “deal of the century” spearheaded by Donald Trump and the Arab and Palestinian response.

Khaled Barakat,  was invited to be one of the keynote speakers for the 6th International Assembly of the International League of Peoples’ Struggle (ILPS)in Hong Kong from 23 to 27 June. Barakat was also unable to deliver his keynote address with this unjust gag order.

As there are more than 500 political prisoners inder the US-Duterte regime in the Philippines, there are 5,152 Palestinian security detainees and prisoners being held in Israel Prison Service (IPS) facilities, including 303 from the Gaza Strip. Another 555 Palestinians, 11 of them from the Gaza Strip, were in IPS prisons for being in Israel illegally. The IPS classifies these Palestinians – both detainees and prisoners – criminal offenders.

U.S. imperialism and Israeli Zionism in trying to crush the people’s protest over the plight of the Palestinians.

Barakat was presented with an 8-page document and told that he was not allowed to give speeches in person or over video, participate in political meetings or events or even attend social gatherings of over 10 people; he was told that violations were punishable by up to a year in prison. Despite claiming that Barakat’s speech could increase tensions or “political conflict” between Jews and Palestinians and Arabs in Germany, the document points to absolutely no negative repercussions whatsoever of all of his previous speeches in the country.

The document also accuses Barakat of being a member of the Palestinian leftist party, the Popular Front for the Liberation of Palestine (PFLP), which is not at all banned in Germany.

We call on the international community to denounce this latest attack on Palestinians. 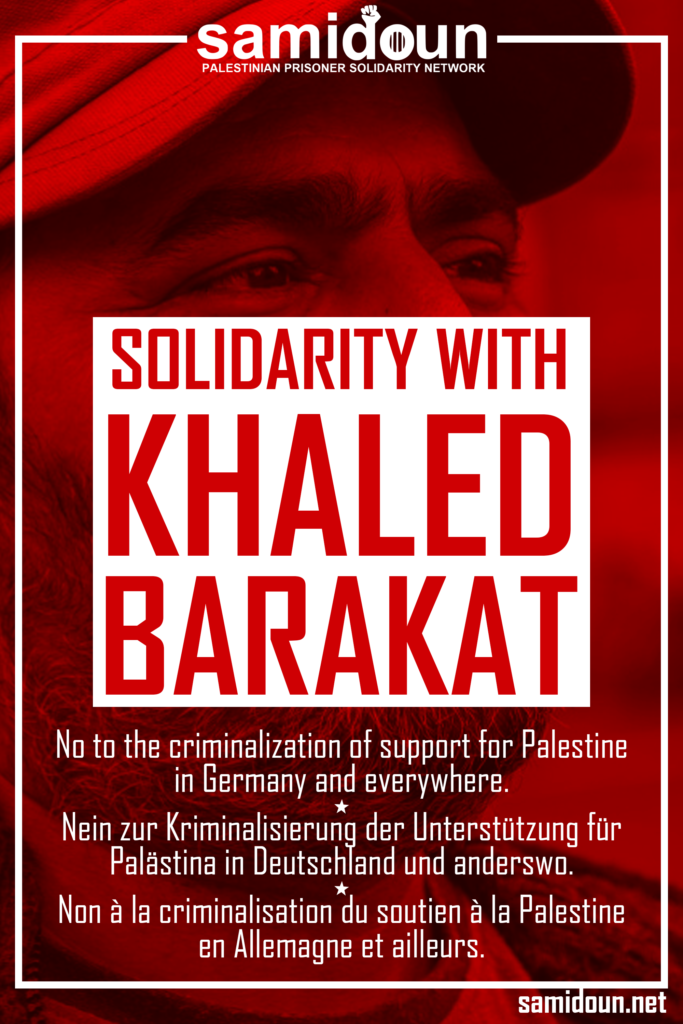