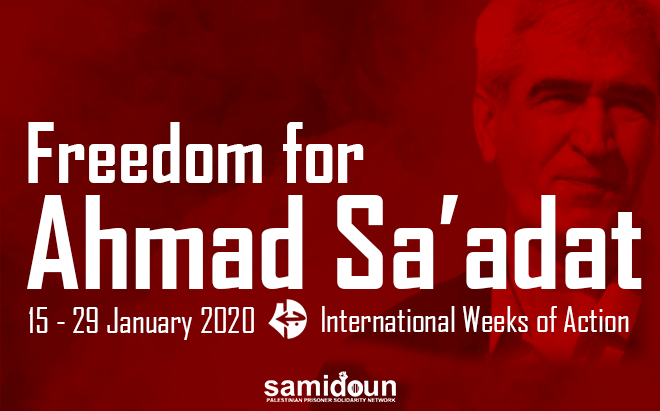 As the Weeks of Action begin today, we note that this day also marks the 18th anniversary of Sa’adat’s abduction by the Palestinian Authority security forces, the first step of his imprisonment. Today, he and his comrades are held in Israeli jails, continuing their struggle for freedom and for the liberation of Palestine. The Campaign to Free Ahmad Sa’adat released a statement on this important anniversary as the Weeks of Action begin, noting:

“1) This crime constitutes an open wound that will not heal, will not be forgotten and will remain an eternal disgrace for the perpetrators. We can only achieve justice by holding all of those responsible accountable and bringing them before a trial of the people for what they have done against a great national resistance leader.

2) This unforgivable crime requires us to strike the walls of the tank again and again on the necessity of bringing an end to the policy of security coordination, which is a treacherous stab in the side of our resistance and our people.

3) On the anniversary of this crime, we value and highly appreciate all of the events and activities that will be organized in support of Ahmad Sa’adat and the prisoners’ movement during the next two weeks between 15 and 30 January, which the Campaign, the Samidoun Network and a number of friendly forces have called for. We remind all of the urgent need to raise your voices loudly for the prisoners’ movement which is being subjected to a massive Zionist assault.”

Our initial list of events is posted below, with actions in Toulouse, Brussels, Gothenburg, Paris, Vancouver and more. We know events and actions are being organized now, and we urge all to participate on the 25 January Day of Action against U.S. war and imperialism in Iraq and Iran.

Please let us know about your events! Use this form or email samidoun@samidoun.net. Let us know – whether you’re including this campaign in a larger action or organizing your own action, we want to make sure to spread the word!

Please let us know about your events! Use this form or email samidoun@samidoun.net. Let us know – whether you’re including this campaign in a larger action or organizing your own action, we want to make sure to spread the word!

We urge all supporters of Palestine and defenders of freedom for the Palestinian people to join us between 15 and 29 January 2020 in weeks of action to free Ahmad Sa’adat and all Palestinian prisoners held in Israeli jails.

Ahmad Sa’adat is the imprisoned General Secretary of the Popular Front for the Liberation of Palestine, a Palestinian national liberation movement leader and a symbol of the international left and revolutionary movements. He was sentenced to 30 years in Israeli prison on 25 December 2008, accused of leading a prohibited organization and “incitement.” The PFLP, like all Palestinian political parties and resistance organizations, is labeled a “prohibited organization” by the Israeli occupation authorities.

We urge international action for the freedom of Sa’adat, his comrades, and all Palestinian prisoners, because their imprisonment is an international affair. In the case of Sa’adat and his comrades, this year marks the 18th anniversary of their imprisonment by the Palestinian Authority under “security coordination” with the Israeli occupation, a practice that continues to this day – to the detriment of Palestinian students and resistance organizers, who are imprisoned in PA jails in a “revolving door” with the Israeli occupation.

While held in the PA’s Jericho Prison, Sa’adat and his comrades were held under U.S. and British guards, making clear that this imprisonment was anything but an exercise of Palestinian sovereignty. Indeed, some of those same British guards previously served to guard Irish Republican prisoners in the occupied North of Ireland.

On 13 March 2006 –following the Palestinian Legislative Council elections in which Sa’adat himself was elected to the PLC and supporters of “security coordination” sustained significant losses, while the winning Change and Reform bloc pledged to free PA political prisoners –Israeli occupation forces violently attacked Jericho prison. The U.S. and British guards cleared out in advance in a prearranged agreement with the occupation forces –but the occupation forces killed two Palestinian guards.

Ahmad Sa’adat is a Palestinian, Arab and international symbol of resistance to capitalism, racism, apartheid and colonization. Targeted for his political role and clarity of vision, he remains a leader of the Palestinian prisoners’ movement and the national liberation struggle behind bars, unable to be silenced despite the oppression imposed upon him and his 5,000 fellow Palestinian political prisoners. He urges supporters of justice for Palestine around the world to boycott Israel.

We also note that prisoners of the Palestinian liberation movement continue to be held in international jails as well, especially Georges Ibrahim Abdallah, jailed in France for 35 years despite being eligible for release since 1999, and we join the call for their liberation.

The attack on the Palestinian people is continuing and intensifying. Palestinians in Gaza are fighting to break the siege, Palestinian refugees struggle for their right to return and all Palestinians confront land confiscation, criminalization, home demolitions, mass imprisonment and extrajudicial execution. Israeli impunity is trumpeted by imperialist politicians from the U.S. to Canada to Germany to France to Australia and beyond.

Ahmad Sa’adat and 5,000 Palestinian political prisoners are held captive in Israeli jails with the full support and complicity of these governments. We know that it is critical that we internationalize the struggle for their liberation: struggling to free Palestinian prisoners, to build the campaign to boycott Israel and the boycott, divestment and sanctions movement, and to end the ongoing aid and support that enables and empowers Israel’s crimes against the Palestinian people for over 70 years.

Join us for the Week of Action! Organize an event, a protest, a table or a discussion in your city, campus, town or community. We know that the Zionist state wants to isolate these Palestinian prisoners and silence their voices –together, we can help to break that isolation.  Campaign to Free Ahmad Sa’adat Samidoun Palestinian Prisoner Solidarity Network 25 December 2019 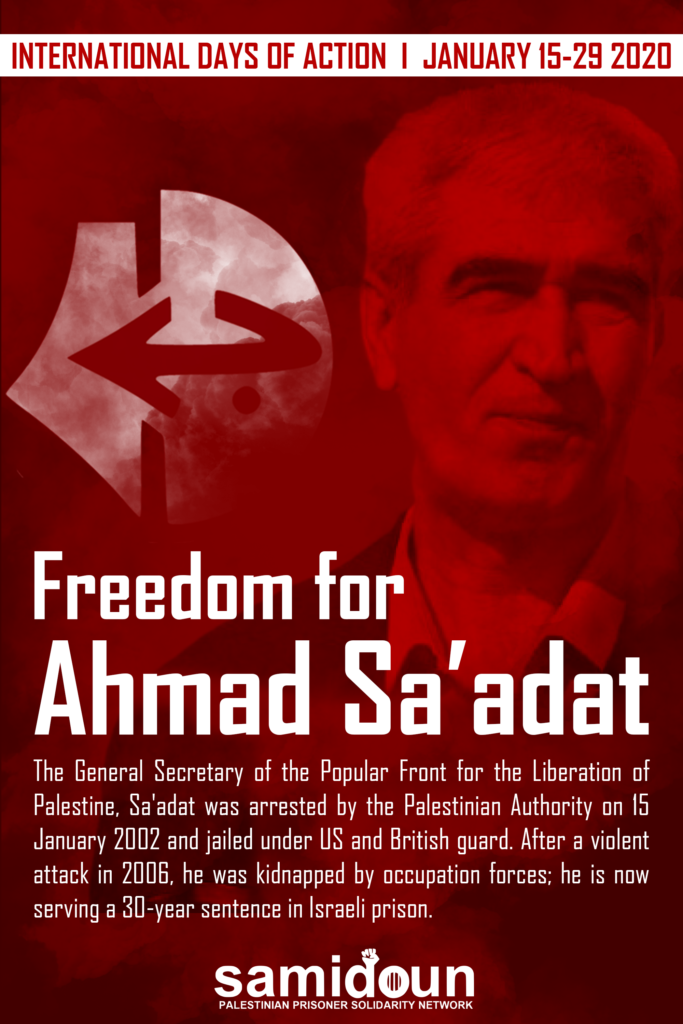 The General Secretary of the Popular Front for the Liberation of Palestine, Sa’adat was arrested by the Palestinian Authority on 15 January 2002 and jailed under US and British guard. After a violent attack in 2006, he was kidnapped by occupation forces; he is now serving a 30-year sentence in Israeli prison. 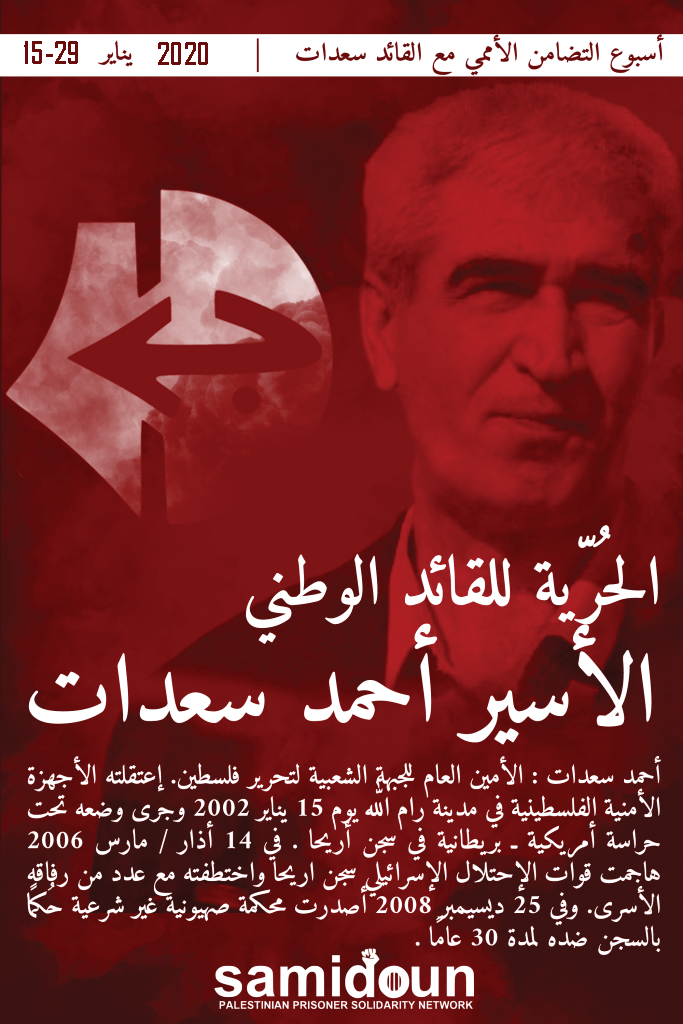 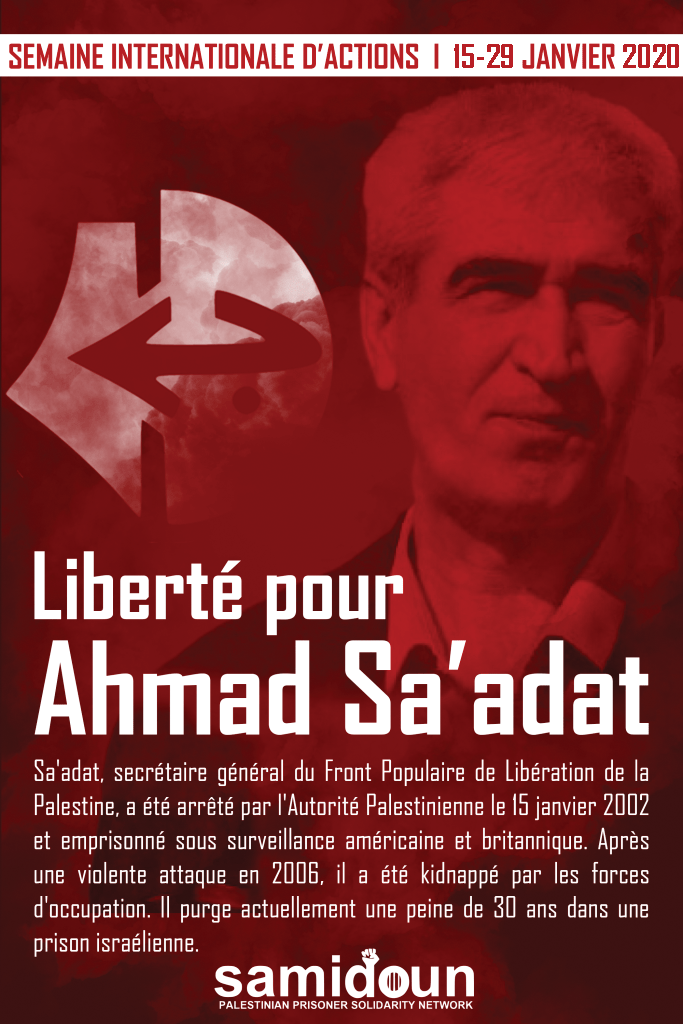 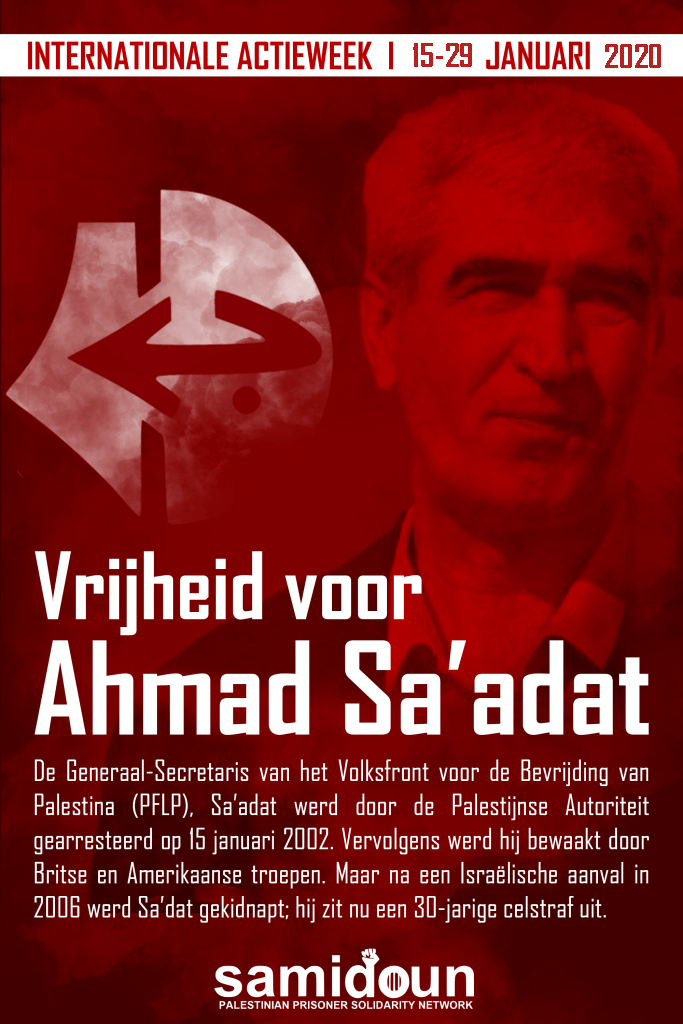 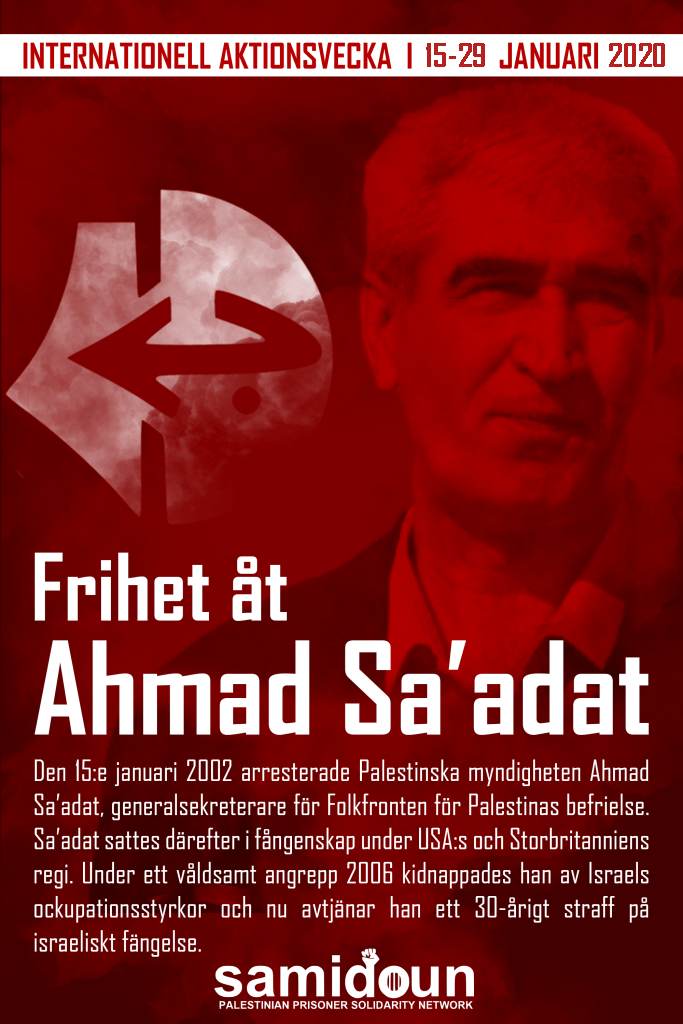 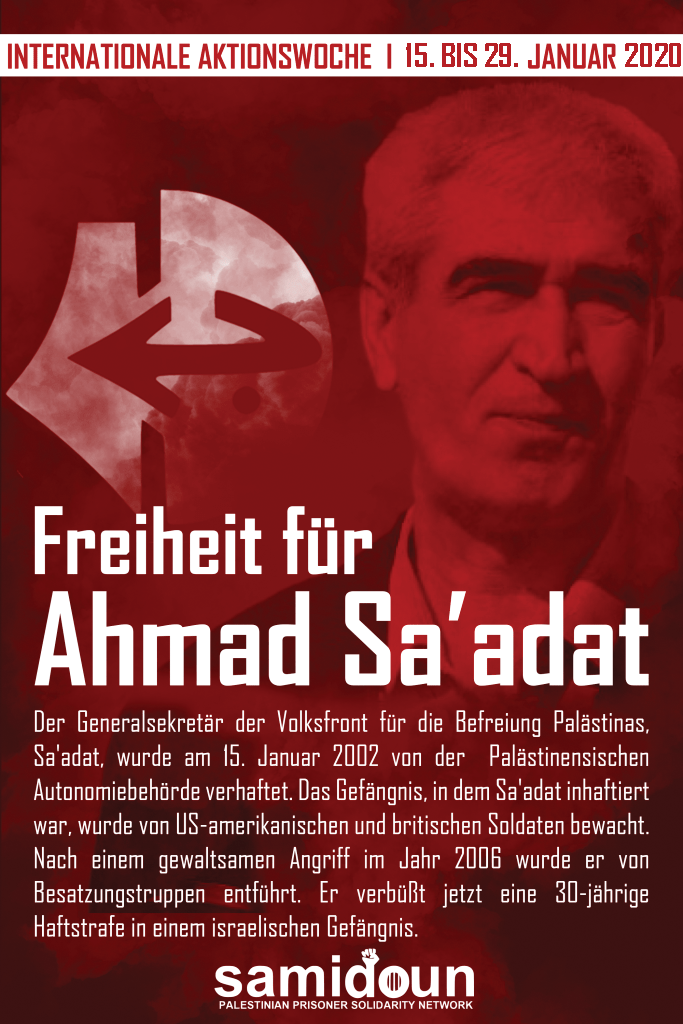 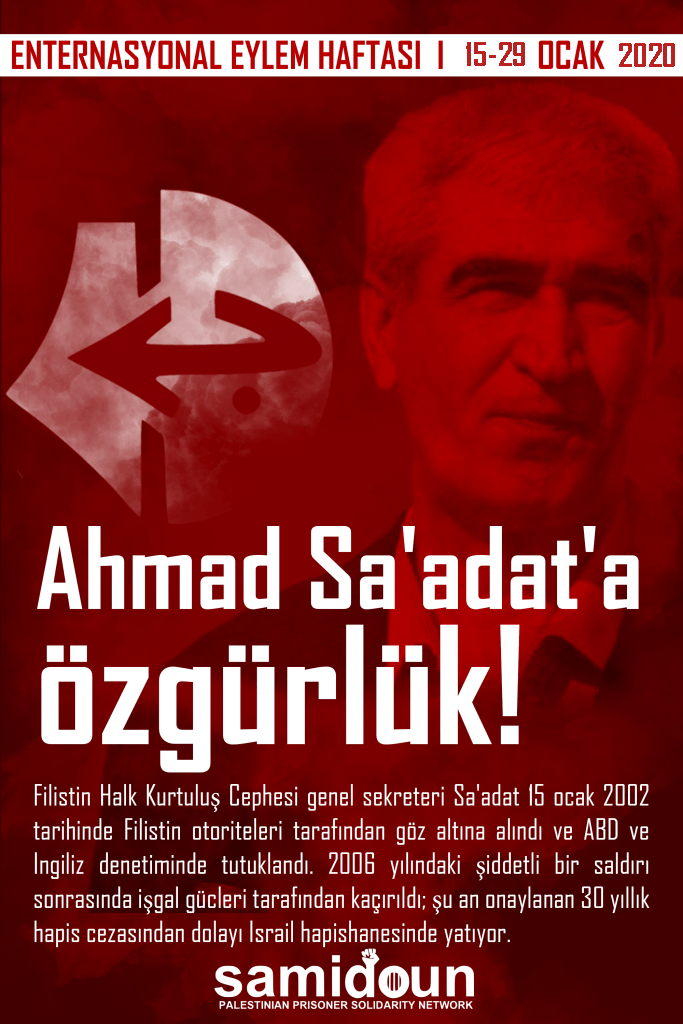 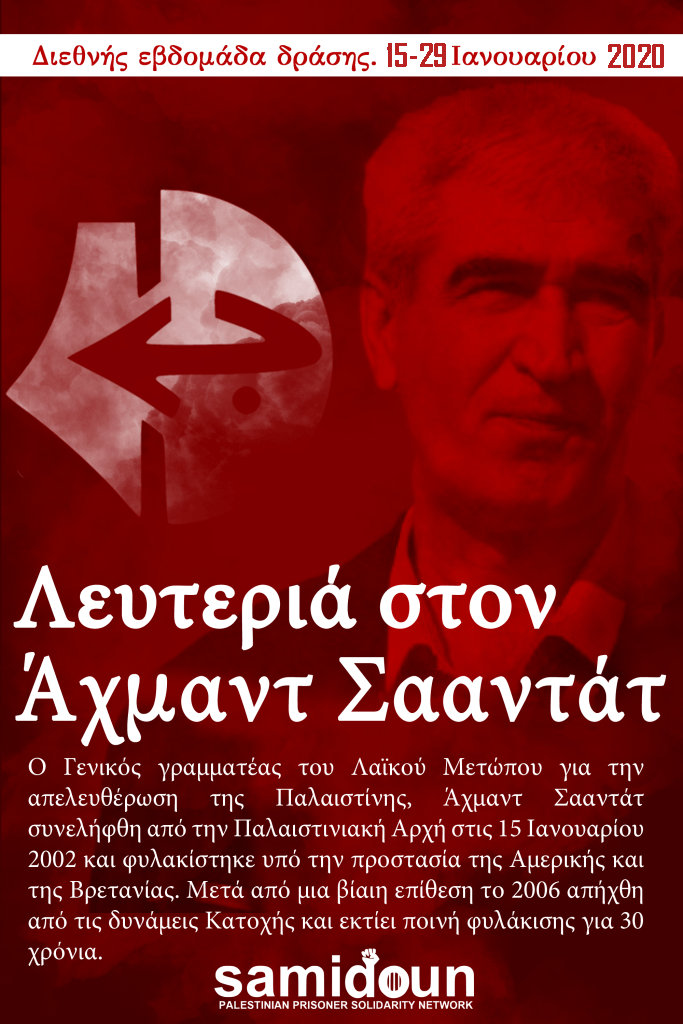 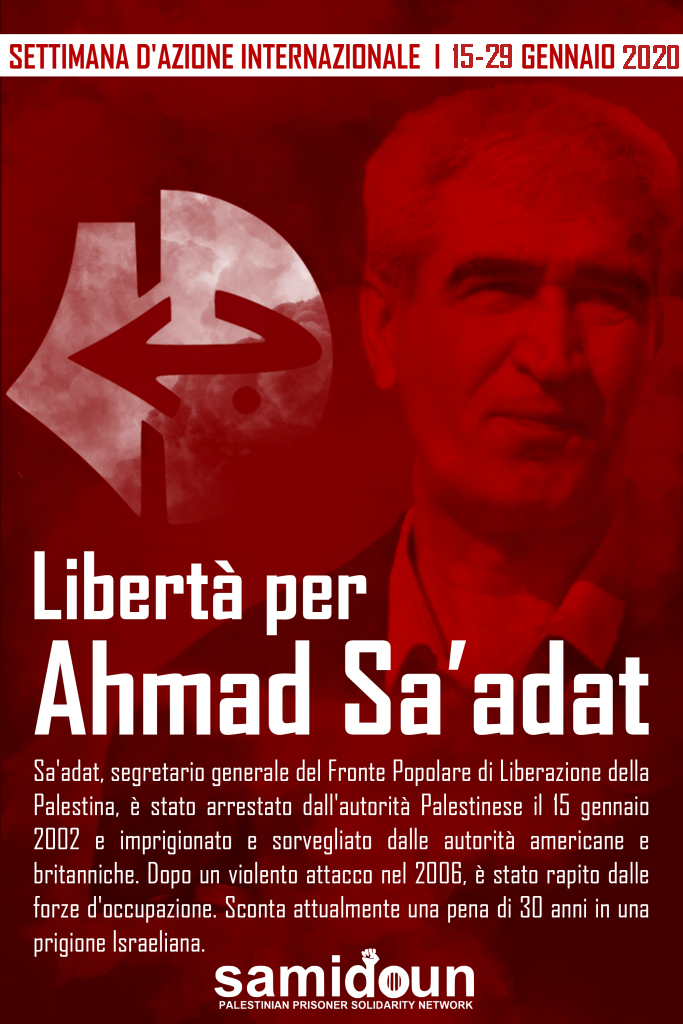 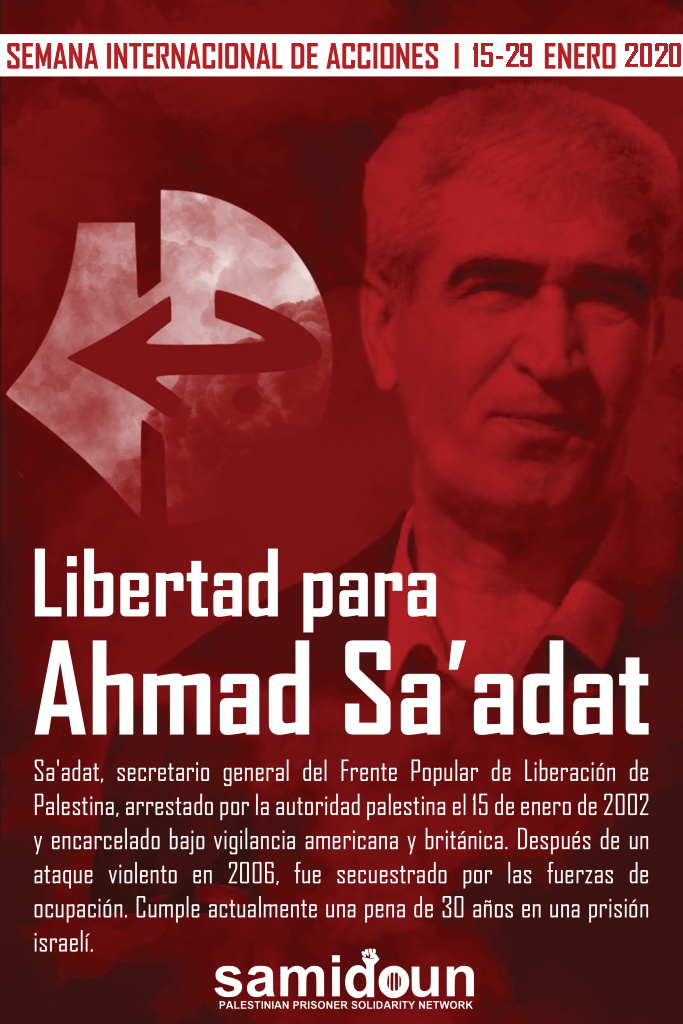 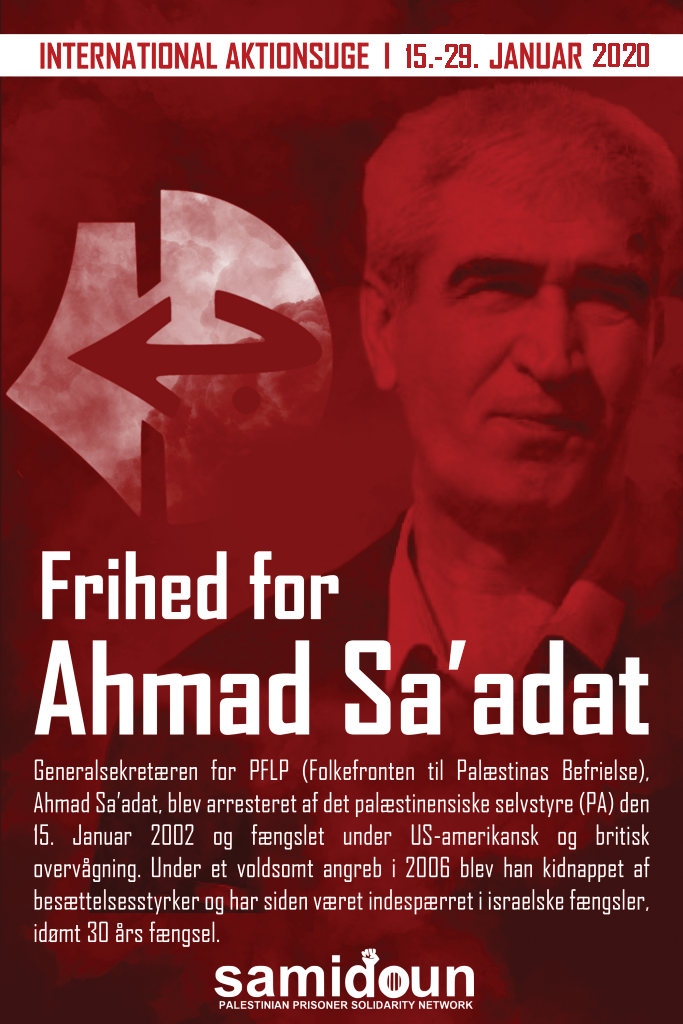