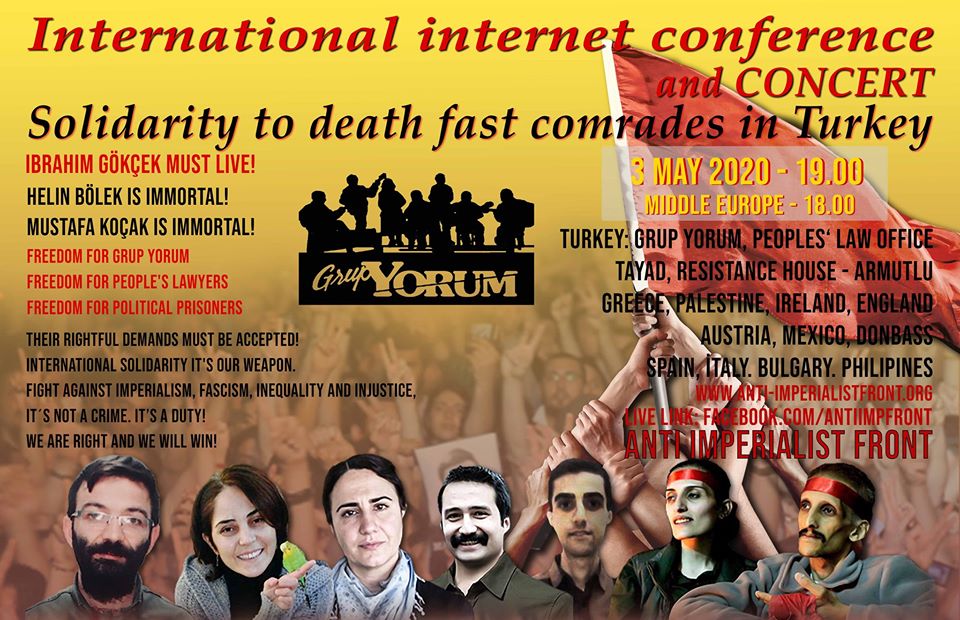 Samidoun Netherlands joined many other groups and organizations around the world in the International Internet Conference and Concert for Solidarity with the Resistance, organized by the Anti-Imperialist Front on Sunday, 3 May.

The online event was organized in particular to support the death fast hunger strikers in Turkey, where musician Ibrahim Gökçek of Grup Yorum has been engaged in a hunger strike for 322 days. Helin Bölek, another musician of Grup Yorum, lost her life after 288 days of hunger strike on 3 April, while imprisoned hunger striker Mustafa Koçak died on 24 April inside Turkish prisons after 297 days of hunger strike, during which he consumed only water and sugar. Samidoun Palestinian Prisoner Solidarity Network honors their deep sacrifices in the struggle for liberation; they stand as martyrs in the international movement for justice and liberation.

“Koçak and Bölek – along with another Grup Yorum member Ibrahim Gökçek, who is still continuing his protest – started their hunger strikes to demand the right to fair trial, while Bölek and Gökçek also demanded the lifting of concert bans on their band, an end to raids on its cultural centre, and for the release of imprisoned band members,” Ahval News noted.

All participants emphasized the importance of international solidarity to support the hunger strikers and their just demands in Turkey. Watch the video of the event here:

Ibrahim Gökçek’s letter of 30 April is republished below:

“Today is the 318th day of our death fast resistance, which we have been continuing to make our art freely. By this time, much has been said, written and drawn on our resistance. Our resistance has already exceeded the borders of our country. It can be said that our resistance has been heard and supported all over the world from Antarctica to Latin America.

“There have been so many days that we shared the same stages, platforms with you, our intellectual and artist friends. With those we couldn’t share the same stage, we had the honor of making art for a more fair and livable world. We have also experienced the oppression of the dominant powers who are fed by people’s remaining ignorant and unorganized.

“As our intellectual and artist friends, you have more or less done your best to support this resistance and make it heard. You came to us, shared our hunger, you organized concerts for us. You have personally supported us with your productions and have made many efforts to make the voice of our resistance heard. But unfortunately, we were unable to keep Helin, with whom we resisted shoulder to shoulder, alive.

“After Helin and Mustafa Koçak, who continued the death fast for justice, lost their lives, calls are made for me not to die. Of course, I want to live, too. Well, friends, as the resistance has come to this stage, it has not made any solid gains, how can I quit the resistance?

“As intellectuals and artists, we got our share from the oppression and attacks of the state. Our plays, concerts were banned, lawsuits and investigations opened against us because of our social media posts are endless. Didn’t these attacks become so reckless because we have failed to put up a stronger resistance together until today?

“Imprisoned Grup Yorum member Ali Araci should be released immediately. His arrest does not have a right reason, a legal justification. It was understood during the trials without evidence and unjust trials that how unfair and arbitrary the raids were. The lies and demagoguery about Group Yorum members and Idil Cultural Center have been in vain.

“All Grup Yorum members were arrested upon unfounded anonymous witness statements. Today, four Grup Yorum members are arrested because they had been to our Idil Cultural Center and due to the statements of the defamatory witnesses. I was released thanks to the power of my resistance and you adopted it. I want my friend, with whom we composed together, with me. I want to be able to make new compositions with Ali. i want the imprisoned Grup Yorum members to be released and concerts to be allowed!

“Why are such simple and humanly demands not met? I want our demands to be fulfilled! Now, with all our strength, we must put pressure on the government to meet our demands. Without losing time, our intellectual and artist friends should talk with the relevant ministry and the presidency by forming committees among themselves and ensure that our demands are met. I greet you all with the warmth of Helin and Mustafa and with the enthusiasm of our resistance!”