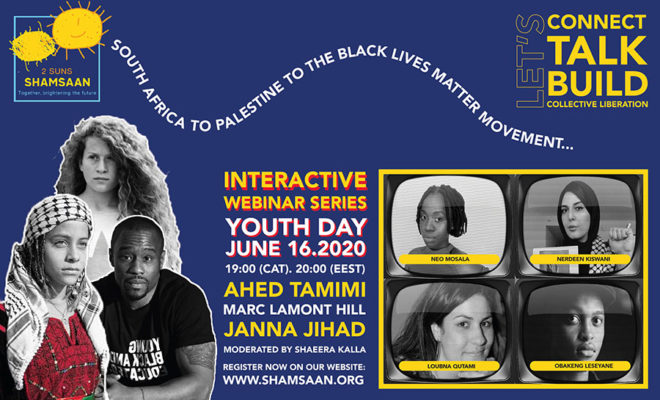 Shamsaan and our partners are launching a Webinar Series on transnational struggles resisting settler colonialism on June 16, commemorated as SOUTH AFRICAN YOUTH DAY. This June 16 is significant because it marks 44 years since the historic 1976 SOWETO UPRISINGS which was sparked by school children protesting the Afrikaans Medium Decree, which forced black schools to use Afrikaans and English as the languages of instruction. This legislation by the apartheid government was a form of further oppressing and hindering the education of black students, in order to exploit black labour and keep the unjust order of systematic racism intact.
The struggles for decolonised education in South Africa were revived by the 2015 ‘RHODES MUST FALL’ and ‘FEES MUST FALL” protests at universities. These protests have resonated across the world and currently at Oxford University; there are ongoing protests to remove the statue of the racist Cecil John Rhodes.
In USA the brutal killing of George Floyd has given renewed energy to the BLACK LIVES MATTER MOVEMENT (BLM) and has shifted mindsets the world over driven to addressing structural racism. In PALESTINE, days after George Floyd was publicly slain, a 32-year-old disabled autistic man, Iyad Halak, was killed by Israeli police in Jerusalem. This issue is not far from home for South Africans either, and the killing of Collins Khosa and more than 19 others under the lockdown at the hands of the South African National Defense Force and police has also sparked outrage. Taken together, these deaths highlight parallels between three struggles which have their roots in systems of violent settler colonialism.
While the world pledges its solidarity with BLM, it was hopeful to see thousands of Israelis gathered in Tel Aviv to protest Prime Minister Benjamin Netanyahu’s pledge to begin annexing parts of the West Bank. Given the devastating but hopeful times we are in, seeing people coming together against unjust status quos around the world, it is important that we take time to engage with one another on how all our struggles for justice are deeply connected.
“LET’S CONNECT” over shared struggles and transnational solidarity in resisting systems of settler colonialism and oppression the world over, from South Africa to Palestine, to the United States of America and beyond.
“LET’S TALK” with students, activists, academics, workers, artists and organisers to re-imagine what must rise as we push for systems of oppression to fall.
“LET’S BUILD” relationships and grow a social justice movement that promotes freedom and collective liberation.
REGISTER NOW at www.shamsaan.org/webinar-registration The series will be live-streamed on Facebook and available on video platforms like YouTube and podcasting outlets.
The first episode is titled “CONNECTING THE JOINT STRUGGLES FOR DECOLONISED EDUCATION – PAST PRESENT + FUTURE”… FROM SOUTH AFRICA TO PALESTINE AND THE BLACK LIVES MATTER MOVEMENT.
The discussion will be facilitated by SHAEERA KALLA, a South African activist and former president of the Student Representative Council at the University of the Witwatersrand. She was involved in the Fees Must Fall movement that began in 2015 that calls for decommodified and decolonised education.
FROM USA: DR MARC LAMONT HILL, academic, activist and media personality; an award-winning journalist named on America’s top 100 most influential Black leaders and academic. His research focuses on the intersections between culture, politics, and education in the United States and the Middle East.
FROM PALESTINE: 14 year old JANNA JIHAD is a young activist who has recorded and posted reports of her life as a child living under Israeli military occupation since the age of 7. She has been awarded internationally for her work and as the ambassador of Shamsaan, travelled internationally to several countries including South Africa and the USA on speaking tours. She was named in a Knesset report as a security threat for this but she continues to produce media reports for international news agencies and has been featured in documentary films.
AHED TAMIMI is a teen activist who became a PALESTINIAN NATIONAL SYMBOL. She has protested against land confiscation and the exploitation of natural resources for settlement construction around the village of Nabi Saleh in the West Bank since she was a young child. At the age of 16, she was arrested, subjected to Israeli military court processes and jailed for 8 months after a live video of her confronting Israeli soldiers was spread online. She is currently pursuing studies in international law at Birzeit University.
FROM USA: LOUBNA QATAMI, member, and the former International General Coordinator for the PALESTINIAN YOUTH MOVEMENT (PYM) She is a Postdoctoral Fellow at the University of California, Berkeley, PhD from the Department of Ethnic Studies at the University of California, Riverside, Former Executive Director of the ARAB CULTURAL AND COMMUNITY CENTER (ACCC) in San Francisco.
FROM NYC: NERDEEN KISWANI: Palestinian organiser from New York City and Law student at the CUNY School of Law. Founder and Chair of WITHIN OUR LIFETIME – UNITED FOR PALESTINE, a community based Palestinian youth organization that has been building the movement for Palestine for over 5 years.
FROM SOUTH AFRICA: NEO MOSALA: Student activist from South Africa, Allan Gray Orbis Foundation fellow and Law student at the University of the Witwatersrand. Chairperson of RETHINKING ECONOMICS FOR AFRICA (REFA) at the University of the Witwatersrand. REFA is an organisation of students building a better economics in society and the classroom. Through a mix of campaigning, events and engaging projects, REFA also connects people to discuss and enact the change needed for the future of economics.
OBAKENG LESEYANE: SOUTH AFRICAN Youth activist recognized as the youngest Inaugural Public Service Fellow at Apolitical Academy ‘19. Obakeng is committed to working at the intersection of Education, Public Policy and Strategic Development centering young people in the engagement.
REGISTER NOW at www.shamsaan.org/webinar-registration The series will be live-streamed on Facebook and available on video platforms like YouTube and podcasting outlets.